Operating Budget Is Worse Than It Appears

While this picture by itself is cause for concern, the plan relies on four assumptions that point to an even more alarming fiscal outlook for the MTA: 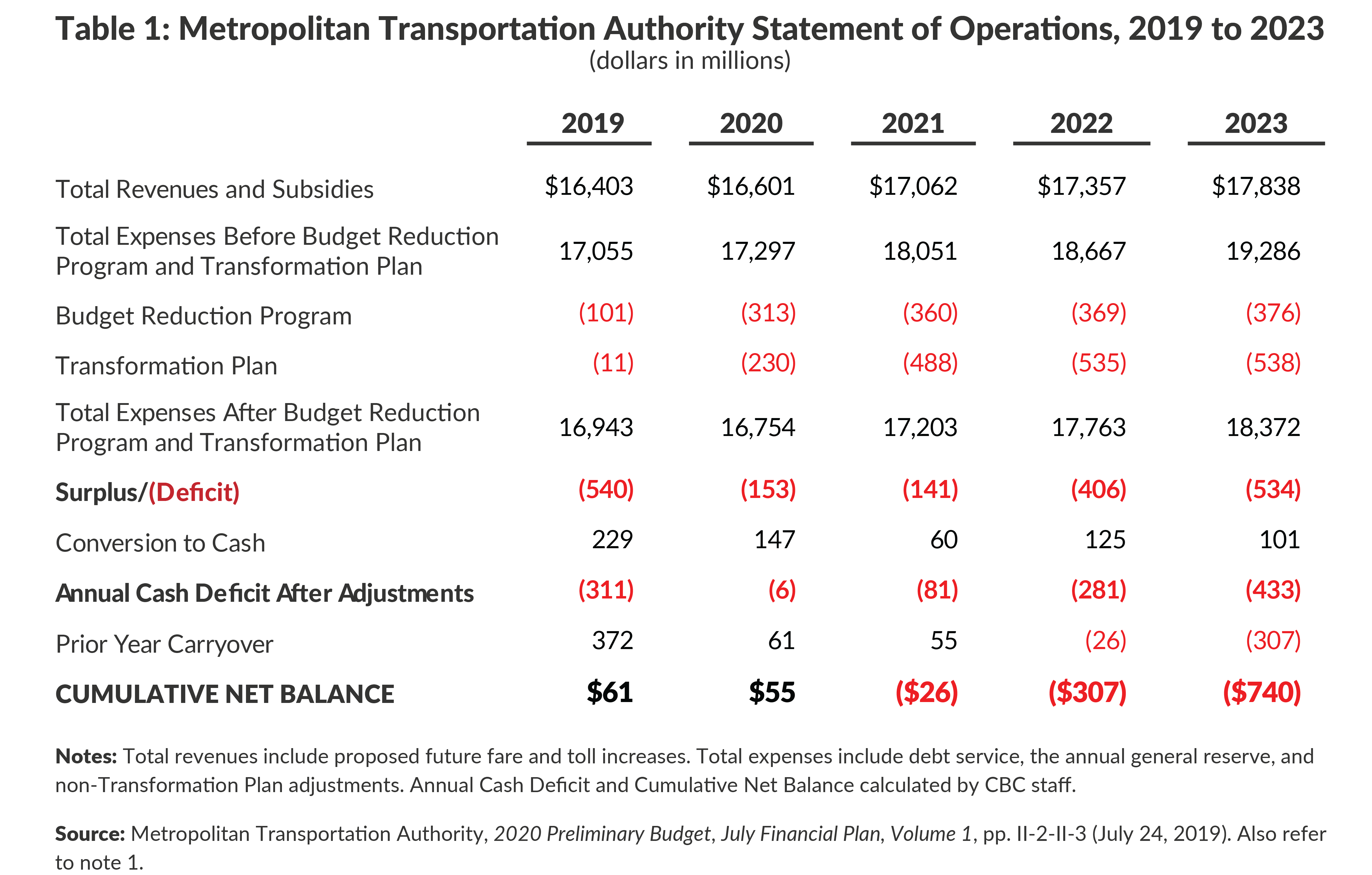 The MTA relies heavily on assumed savings from its recently adopted Transformation Plan, which requires a major reorganization and centralization of many of the MTA’s support services.2 The Transformation Plan has notable organizational design themes but is light on details. Both the MTA's chair and CEO and other board members referred to it with terms such as “blueprint” and “living document” during the July 24th board proceedings, before voting to approve it. The financial plan counts on the Transformation Plan for annual savings growing from $230 million in 2020 (before full implementation) to $538 million in 2023.

This savings estimate is highly optimistic because it assumes savings at the top of the range suggested by the plan’s designers and because the plan is vague and faces serious obstacles to implementation. The Transformation Plan suggests that “total potential annual savings opportunities is an estimated $370-$530 million.”3

In addition to the high savings estimate, the Transformation Plan faces serious barriers to its implementation. These challenges, which the Transformation Plan extensively presents in three of its 37 slides, include civil service constraints and the possible need for civil service reform, as well as the need for future collective bargaining negotiations. The Transformation Plan estimates that 83 percent of Transit and 98 percent of Triborough Bridge and Tunnel Authority employees are covered by the civil service system and indicates that the MTA is involved with 32 unions across 70 contracts.4 The Plan does not provide guidance for how the MTA can address these issues, merely noting, for example, that “[m]any of the initiatives included in this Transformation Plan would require the MTA to work through Civil Service constraints to align the correct resources against the capabilities and roles required for success in the future” and that “[t]he MTA will need to negotiate changes required to support the Transformation Plan” with its 32 unions. Given that the plan assumes a reduction of 1,900 to 2,700 positions, the MTA will face tough negotiations.5 Transport Workers Union (TWU) leadership has already harshly criticized the prospect of losing union jobs as a result of the plan.6

The Transformation Plan also comes with programmatic challenges. It focuses heavily on centralization, which can improve efficiency and standardize best practices. However, overcentralization carries risk and the MTA must be careful not to disempower, demotivate, and underutilize the expertise and innovative strength of sub-unit leaders, managers, and front-line employees; this challenge may especially apply to the centralization of the MTA’s capital planning and engineering functions. The MTA should address these concerns as it looks for ways to reduce costs through reorganization.

2. Shortcomings in the Budget Reduction Program

The financial plan counts on savings from the Budget Reduction Program (BRP) which grow from $101 million in 2019 to $376 million in 2023. (See Table 2.) The bulk of the savings, $251 million in 2023, are planned in mass transit operations with a smaller $82 million in the commuter railroads and lesser amounts in other activities.

Shortcomings of the BRP include unspecified items, certain elements counting on administrative savings beyond those in the Transformation Plan, and possible adverse impacts on service. Many BRP proposals lack the specificity needed for implementation. For example, the Department of Subways is scheduled to save $22 million annually by eliminating 222 positions starting in 2021, yet the Financial Plan’s description of this action is “the Department of Subways is working on a plan to achieve these savings and is evaluating options across all divisions.”7 The Financial Plan similarly states that New York City Transit (NYCT) “is evaluating options across all divisions” to reduce 83 positions in 2020, with savings growing from $4.4 million in 2020 to $12.4 million in 2021 and subsequent years.8 Neither of these proposals provides sufficient specificity, making it difficult to assess their feasibility.

Since the Transformation Plan and some BRP proposals lack specificity, it is hard to know how the programs interact with each other. Though the MTA has taken steps not to double-count savings, the inclusion of multiple administrative savings measures is optimistic and is likely extremely challenging to implement given that the savings in both programs seem to draw from similar areas.9 Notably, $197 million of the BRP savings is from administrative activities and another $5 million from service support, the areas of greatest focus in the Transformation Plan. For example, starting in 2020, the BRP attributes $33 million in annual savings, along with the reduction of 240 positions, to NYCT reorganization, which is in addition to the reorganization savings in the Transformation Plan.

Where BRP proposals do have specificity, some may decrease the quality of service. As noted, the BRP savings come heavily from mass transit (approximately three-quarters of the headcount reduction and two-thirds of the dollar savings in 2023). In addition, more than a third of the headcount reduction and a quarter of the savings across agencies is from the maintenance and inventory category. Absent additional specificity, it is reasonable to question whether these cuts will negatively affect service, particularly for bus and subway riders. For instance, the BRP assumes the reduction of 257 transit maintenance positions in 2020, with associated savings of $34.6 million, growing to 297 positions and $38.9 million in 2021 and subsequent years. While the justifications for some of these reductions, such as better aligning maintenance work to nights and weekends when other capital work is performed, appear reasonable, it is unclear whether decreases in maintenance spending will have an adverse impact on service. The MTA should carefully consider its implementation of budget reduction measures that will have a negative impact on service.

3. Planned Wage Gains Below Previous Experience and Not Conditioned on Productivity Improvement

The financial plan assumes 2 percent annual salary increases. However, recent history suggests collective bargaining may yield even higher wage increases. The most recent contract agreement with the TWU, which spanned January 16, 2017, to May 15, 2019, and sets a pattern for other settlements, included two raises of 2.5 percent each and a $500 bonus.10

Given the MTA’s financial condition, even the baseline plan is relatively generous and unaffordable. In the context of the current fiscal pressures, CBC has recommended net-zero wage increases, which in the current financial plan scenario would offset the cost of 2 percent raises by increasing productivity and equalizing represented MTA workers’ health insurance contributions with the levels paid by nonrepresented MTA workers and other state employees.11 Given the magnitude of the MTA’s operating budget imbalance, the associated savings—$180 million in 2020, $288 million in 2021, and $396 million in 2022—are critical to any successful plan to stabilize the MTA’s finances.

In several respects the financial plan is aptly cautious in its revenue projections. The plan assumes that fare and toll revenue before rate increases is almost flat and some subsidies dependent on volatile taxes fluctuate.12  Nonetheless, the plan anticipates continued regional economic growth with subsidies drawing on the Payroll Mobility Tax and other economically sensitive sources growing. Although these assumptions are consistent with those of the New York State financial plan, continued economic growth through 2023 would be 57 quarters of unbroken growth, an unmatched feat in modern national economic history.

While it is common practice not to build a recession scenario into the base financial plan, formulating financial and operational plans on the assumption of continued growth could lead to significant revenue shortfalls in the event of a downturn. A previous CBC analysis estimated that a recession similar to the average of three previous recessions would result in a 2.4 percent shortfall of the total revenue across a four-year MTA financial plan; this scenario applied to the current financial plan would entail a loss of nearly $1.7 billion.13

The MTA’s financial outlook is bleak. Even if everything goes according to plan, the Authority will run substantial cash deficits in coming years reaching a cumulative total of more than $700 million in 2023. Importantly, it is unlikely that all will go according to plan. The Transformation Plan and BRP, the MTA’s major instruments for reducing budget gaps, face serious implementation challenges, wage costs may rise above anticipated levels, and an economic downturn could undermine revenues.

MTA leaders should give priority to addressing these concerns. They should focus on developing and detailing the Transformation Plan, realistically assessing its savings potential and pursuing the changes on which it depends; specifying the elements of the BRP and integrating them with the Transformation Plan without causing a negative impact on service; seeking zero-cost wage settlements in current collective bargaining; and monitoring economic developments to adjust as needed to potential downturns.

Watch the (MTA Budget) Gap! Operating Budget Is Worse Than It Appears