For a Second Year School Aid Grows More than 5 Percent

As CBC warned last year, the school aid genie did not go back in the bottle. The fiscal year 2015 New York State enacted budget increased school aid by $1.1 billion for school year 2014-15, or 5.4 percent.1 The amount is $552 million more than the Governor’s Executive Budget proposal and well above the statutory cap linked to personal income growth (3.1 percent) previously advocated by Governor Andrew Cuomo and adopted by the Legislature in 2011. (See Table 1.) Aid in school year 2014-15 will be $21.8 billion, surpassing the 2009-10 peak of $21.7 billion. More than half of the increase, or $602 million, will be delivered through Gap Elimination Adjustment (GEA) restorations that do not adequately reflect changes in enrollment, student need, or district ability to pay; the legislature also added $251 million for foundation aid and $267 million for expense-based and other categorical grant aid, a form of aid favoring wealthier and higher spending districts. Due to the GEA and expense-based increments, the new funds will not be well targeted to the neediest schools.

In addition to the $1.1 billion in formula aid the enacted budget contains $429 million to be allocated later, including $340 million for the expansion of universal prekindergarten and $89 million for line item grants. The line item grants include $42 million in so-called "bullet aid" ($19 million for the Senate and $23 million for the Assembly) to be distributed to specific districts at a later date according to house resolutions and the agreement of the budget director, and $49 million in other grants.2 The largest of the other grants are $16 million in aid to nonpublic schools and $14 million for Teacher Training Centers.  The smaller grants range from $100,000 for National History Day to $5 million for aid adjustments called "supplemental valuation impact grants." Adding the unallocated aid to the formula aid brings the total increase to $1.6 billion or 7.5 percent. 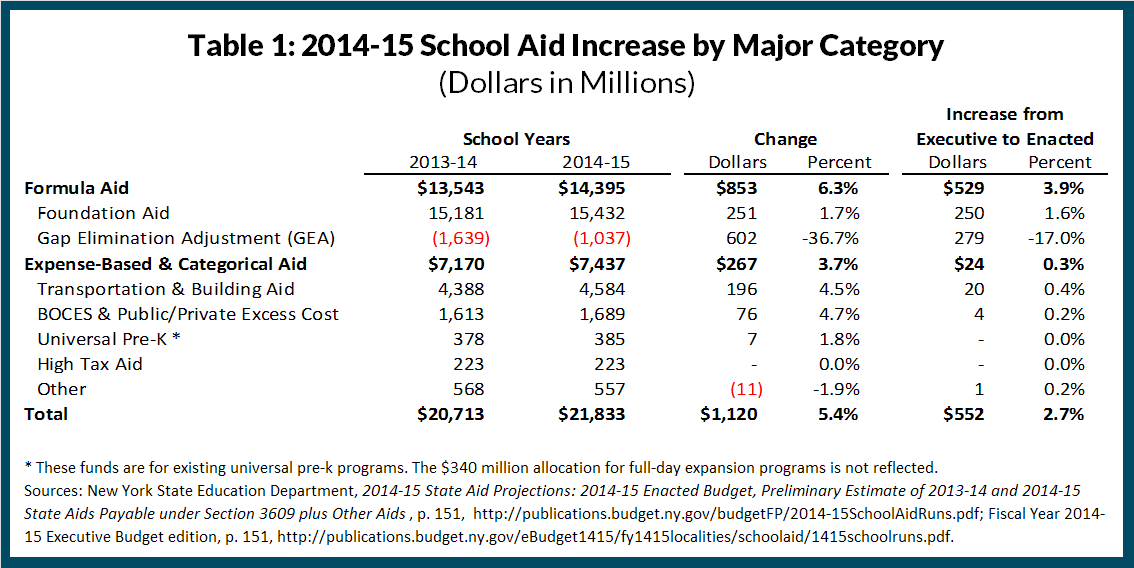