Whose Burden Is It Anyway?

In a series of policy briefs last year, CBC examined housing affordability across large U.S. cities to assess New York’s situation in a broader context.1 Using federal data sources, CBC found that while many New Yorkers face high rents, and the share of households who are “rent burdened” (paying more than 30 percent of income toward rent) grew between 2000 and 2012, the city ranks near the middle among 22 large cities in the share of rent-burdened households. A second analysis revealed New York has the lowest transportation costs among the 22 cities studied due to the large proportion of residents who commute via mass transit.2 When housing and transportation costs are combined, the city rises from 13th to 3rd place in affordability. The average New York household pays 32 percent of its income towards housing and transportation costs, well within the U.S. Department of Housing and Urban Development’s (HUD’s) affordability guideline of 45 percent. CBC also examined how some “typical” households (as defined by HUD) fared in terms of housing and transportation costs in the same group of cities. In this analysis, low-income households in New York also ranked relatively well despite facing serious rent burdens.

This report looks at New York City rent burdens in more detail, using an in-depth housing survey conducted by the U.S. Census Bureau to consider a variety of household characteristics. The use of a New York-specific survey precludes regional comparisons but the findings should be useful in helping the de Blasio administration shape its approach to housing affordability.

Key findings from the survey include:

These findings show the affordability problem is severe among some portions of the population even though the city as a whole fares well in comparison to other cities.

How Large Is the Rental Affordability Problem in New York City?

Housing affordability is defined as the ratio of housing costs to household income. The standard threshold for deeming a household “rent burdened” is when rent exceeds 30 percent of income. This standard is widely used for housing policy decisions at the federal, state, and local level.3 Housing costs are generally measured as combined monthly contract rent and reported monthly utility costs, known as “gross rent.” Gross rent data are collected by the U.S. Census Bureau and are helpful for providing uniformity when comparing housing costs across the country. However, the data have important limitations.

The use of gross rent overstates the affordability problem because it does not account for subsidies and other support received by renters that reduce the actual amount of rent paid. For example, in cities like New York, where an array of subsidy programs exist to reduce the cost of housing, the difference between gross rent and the actual rent paid by tenants can be substantial. Thus a proper accounting of the rental affordability burden requires a more accurate measurement of the problem.

New York City contracts with the Census Bureau to conduct a separate housing survey every three years—the New York City Housing and Vacancy Survey (NYCHVS), last performed in 2014 and released in June 2015.4 The NYCHVS collects detailed data on household characteristics, including a figure for “out-of-pocket” rent. Out-of-pocket rent is the actual amount tenants report paying for housing costs on a monthly basis after receiving government subsidies and financial support from family or friends. This report uses out-of-pocket rent to calculate the housing affordability ratio because it is a more accurate indicator.5

More accurate measurement of the affordability ratio also requires adjusting household income for subsidies. Most forms of income support are already captured by the NYCHVS, but one source of income about which information is not collected is Supplemental Nutrition Assistance Program (SNAP) benefits, also known as “food stamps.”6 This report adjusts household income to provide a conservative estimate of additional income received from food stamps for households.7

Table 1 presents the number of burdened households by severity of rent burden. The “Gross Rent” column shows the number of households that are burdened when using gross rent divided by reported household income to determine the affordability ratio. The “Adjusted Income” column uses out of pocket rent and divides it by adjusted household income. (See definition box). Rent-burdened households in the final column also exclude all households receiving Housing Choice Vouchers or living in public housing operated by the New York City Housing Authority. (These households are, by definition, limited to paying “affordable” portions of their income toward housing under the rules of federal public housing support.) Finally, households that did not report income or rent are also excluded from the adjusted income column.8

The gross rent measure overstates the extent of the housing burden in New York City; under that measure, about 54 percent of households are burdened. The number of burdened households is substantially reduced after adjustments are made for out-of-pocket rent and income support, dropping from more than 1.1 million to 891,037, or 42 percent of households. 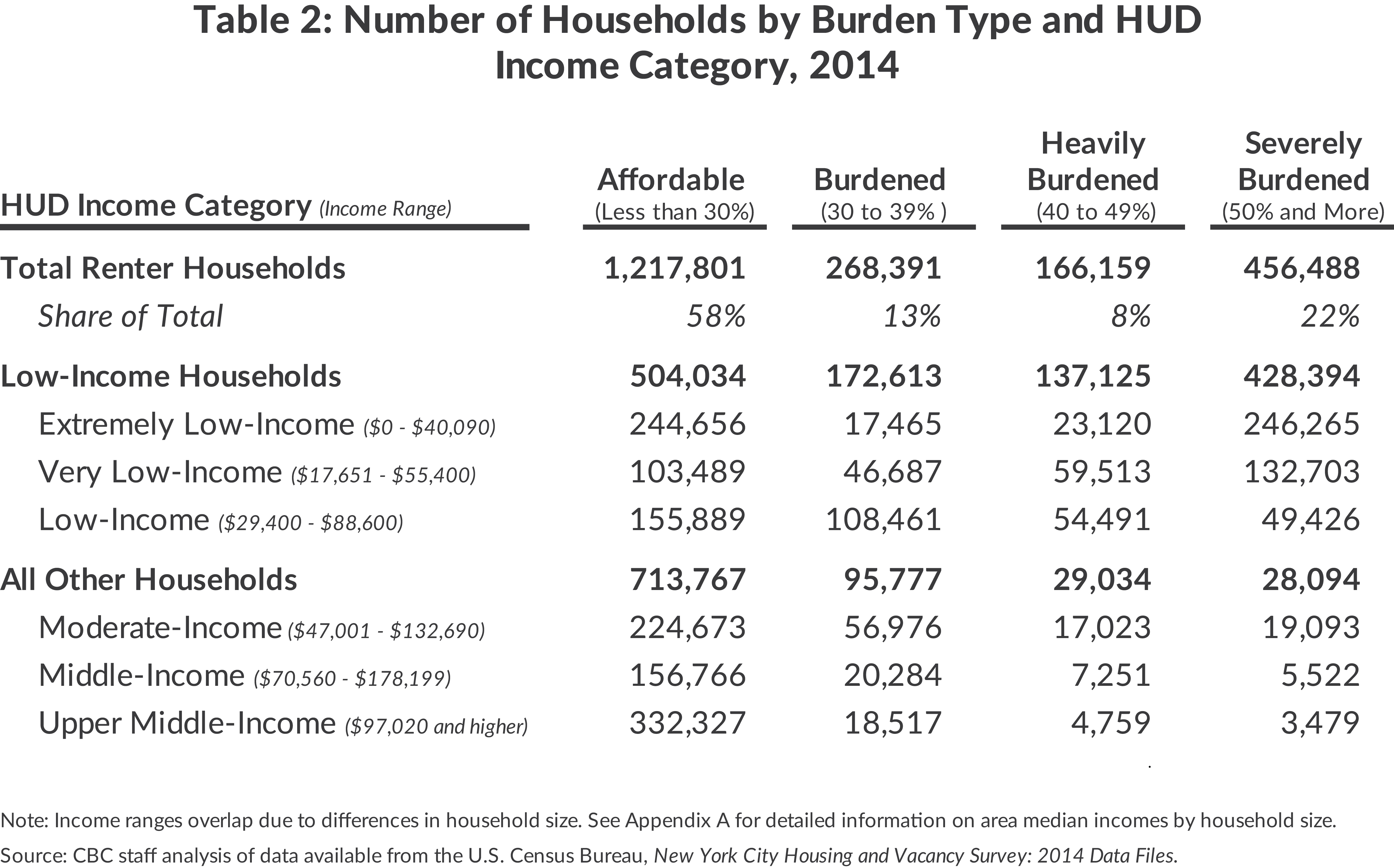 What Are the Characteristics of Low-Income Severely Burdened Households?

Given that 94 percent of severely burdened households are low income, it is clear that the housing affordability problem is in large part an income problem, and it is important to understand who among the low-income is most likely to face severe rent burdens. This section focuses on the demographics of low-income households that are severely burdened (428,394 or 20 percent of all New York City renter households). These households are assessed based on household composition and age as well as by the extent of their rent burdens. (See Table 3a.)Singles are the most numerous household type among the low-income severely burdened (183,394 or 43 percent of the total), and have the highest incidence of severe rent burden (25 percent), followed closely by single parents (24 percent).  (See Table 3b for the share of household types in each category.) Looking at the age breakdown within these groups shows the group most severely burdened is single seniors, 32 percent of whom pay more than half of their income in rent. 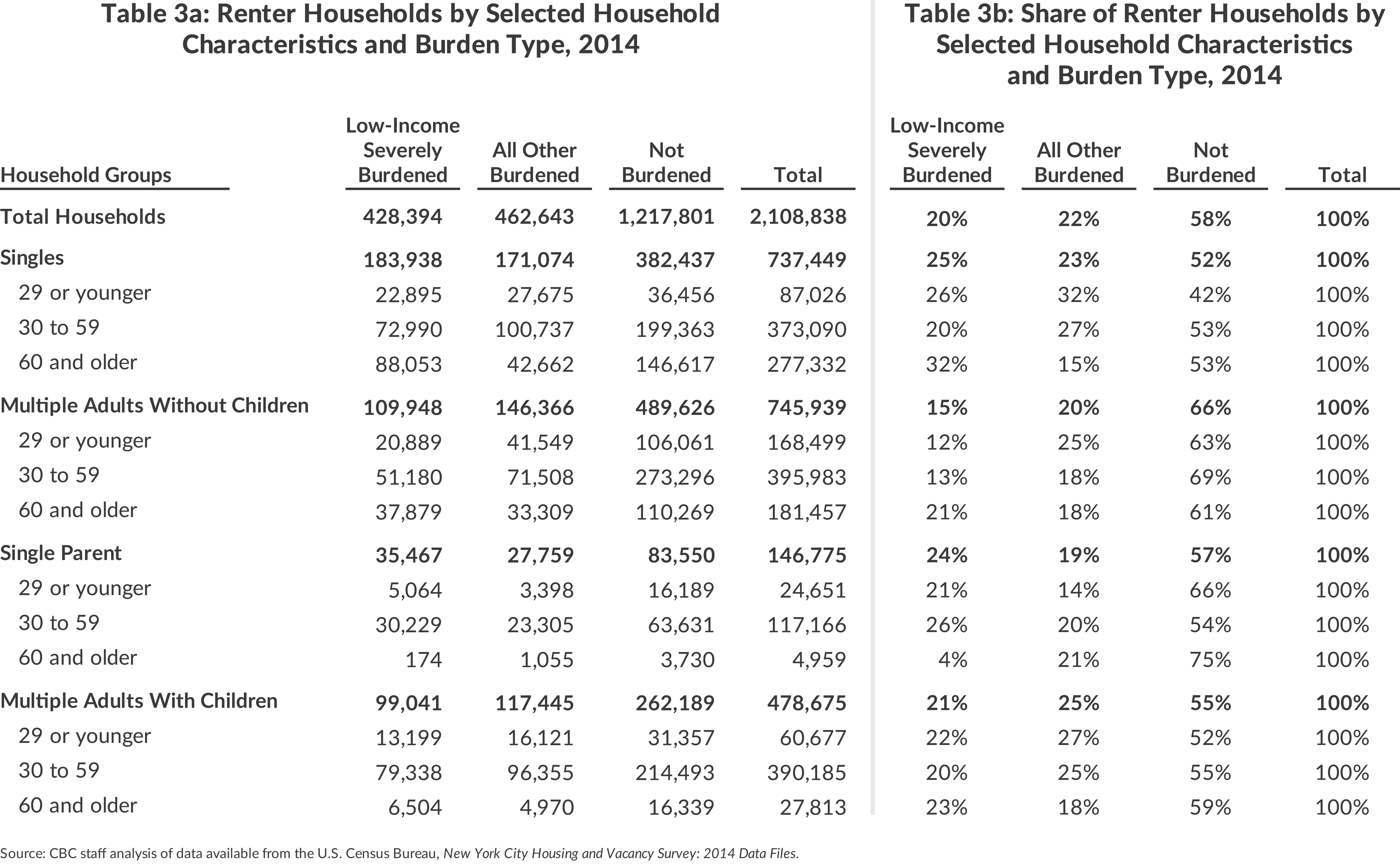 There are almost as many severely burdened multi-adult households with children (99,041) as there are without children (109,948) and they are notably more likely to face the high burdens than their counterparts without children at home.

Housing costs also vary substantially based on location. Figure 1 shows households in Queens, Brooklyn, and the Bronx shoulder a larger share of the burden relative to the renter population in Manhattan and Staten Island. A quarter of the tenant households in Queens were low-income severely burdened, the highest rate among all boroughs. 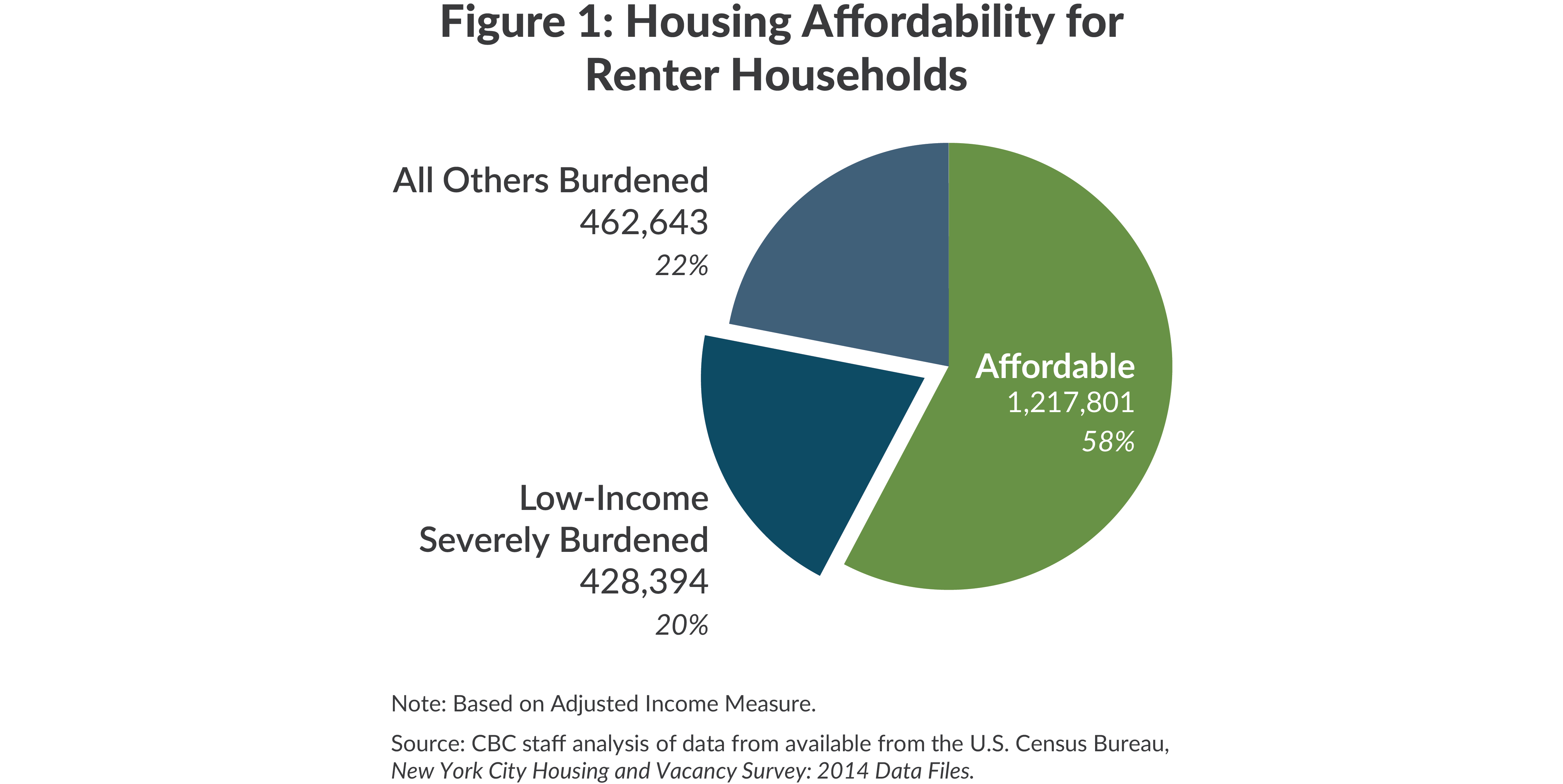 As the de Blasio administration implements its plan to preserve and enhance the supply of affordable housing in New York City, it is useful to have an understanding of which households tend to struggle the most to meet housing costs. This analysis identified and analyzed renter households that pay more than 30 percent (burdened) and 50 percent (severely burdened) of income for housing costs. In 2014, there were 892,142 households that were burdened and 457,548 households that were severely burdened. The vast majority of these households were low-income, suggesting that the problem stems as much from the housing market itself as from income shortfalls. Attention should be paid in particular to single seniors and single parents in targeting programs to address affordability.10 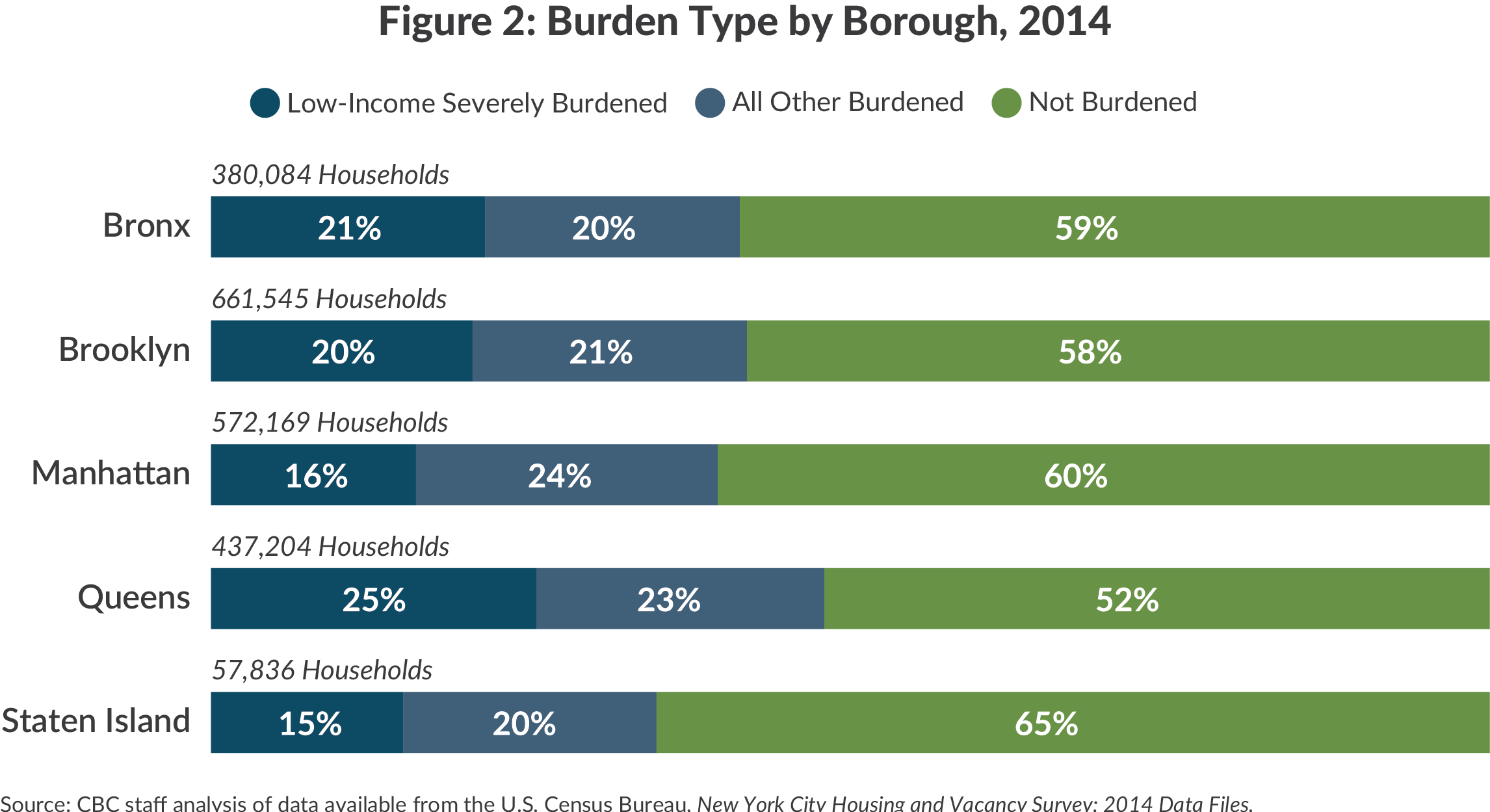 Whose Burden Is It Anyway? Housing Affordability In New York City By Household Characteristics