A recent report, made available online by the New York City Independent Budget Office, offers important insights into New York City’s municipal workforce.  The workforce is aging, with more than one-third eligible for retirement by 2017.   City leaders need to think boldly about how best to reconfigure the City’s compensation and hiring practices to attract a young and skilled workforce in coming years. 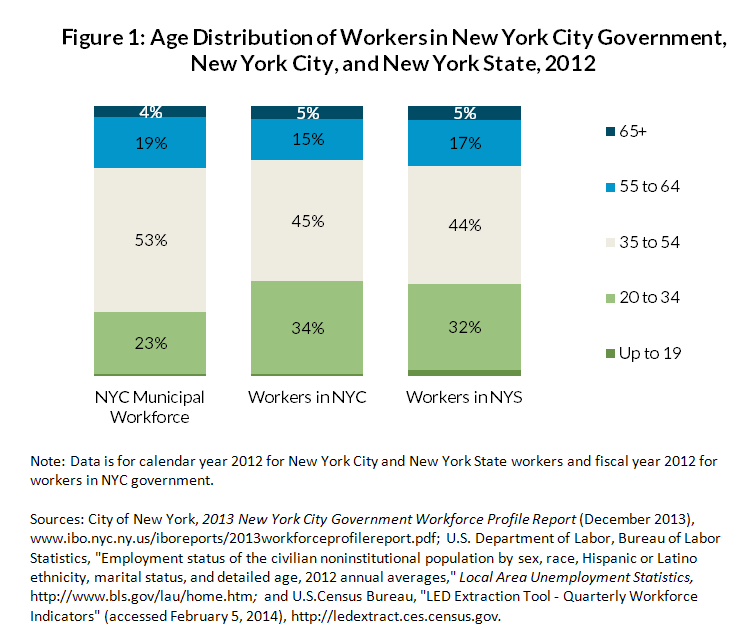 One reason the City has a more senior workforce is public pension plans are structured to reward seniority and an extended length of service.  At the end of fiscal year 2012, almost one-quarter of the City’s municipal workforce had at least 20 years of service with the City, and 19 percent were eligible for retirement with full benefits.  The report notes an additional 15 percent will be eligible for retirement within five years—meaning that more than one-third of the City’s most experienced workers have the option of leaving public service during the new mayor’s first term.[1]

Short-term retirement eligibility surpasses 40 percent for several categories of city workers: skilled craft workers (61 percent); officials and administrators (53 percent); administrative support (51 percent); and professionals (43 percent).  Since fiscal year 2007, only 2 percent of the total workforce – approximately 7,500 employees in fiscal year 2012 [2]– retired in a given year; however retirement rates vary by category of worker each year, and were as high as 20 percent of those eligible among protective service workers in fiscal year 2012.[3] 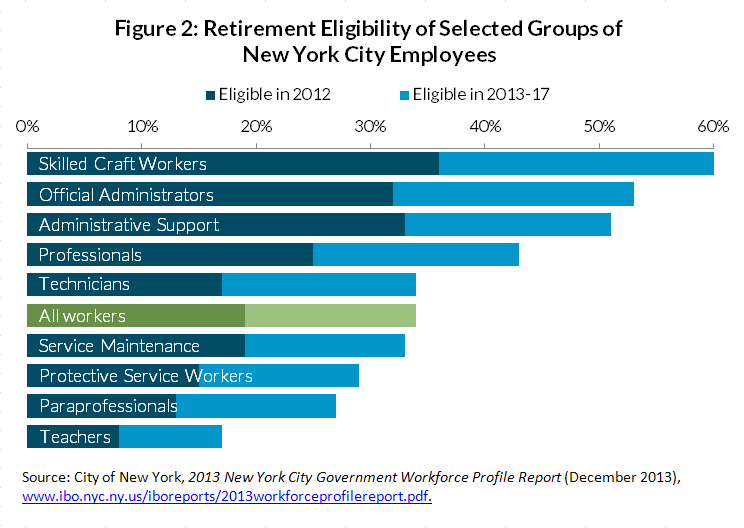 As the ranks of workers eligible for retirement grow, it is imperative for Mayor de Blasio and the City Council to think broadly about strategies for attracting qualified workers to public service.  In particular, they should focus on two issues.

First, City employees need more flexible retirement options.  The City offers an attractive package of compensation that includes competitive wages and relatively generous fringe benefits, but its pension system does not encourage job mobility.[4]  A defined contribution retirement plan, which allows for quick vesting and portability of benefits, would be attractive to many younger workers– particularly “millennials” who seek mission-oriented employment, but expect to changes jobs, or even careers, several times in the course of their working lives.[5]

Second, city leaders should convene a task force to analyze city operations and staffing.  City services should evolve with technology, changing needs, citizen expectations, and data on performance, and the recruitment and organization of the city’s workforce should be adapted similarly, with an emphasis on attracting and hiring the best candidates, empowering employees to serve the agency’s mission, and promoting employees on the basis of achievement.   Updating civil service rules and collective bargaining agreements to reflect modern expectations about work will be necessary to attract young talent.