In fiscal year 2018 New York City spent more than $1.1 billion to lease space for public facilities and offices—an amount that has grown 40 percent since fiscal year 2014, faster than the growth of the New York City budget, office rental asking prices, and the number of City employees.

The Department of Citywide Administrative Services (DCAS) manages the City’s real estate portfolio, including both city-owned and leased spaces. The City Charter requires DCAS to maintain a list of leased and owned space; however, DCAS does not publish lease-level data on how much space the City leases, how much each lease costs, or how efficiently agencies use their space. While the agency has much of this information, to date it has not systematically collected and organized the data in an electronic format that would support rigorous space management.

DCAS launched new initiatives in fiscal year 2017 to bolster its management practices, including publishing new space utilization standards. DCAS is also in the process of re-measuring leased spaces and aggregating the relevant information into a centralized database. However, implementation has moved slowly, and efforts to reduce spending and use space more efficiently have been limited. The initiatives’ initially modest savings targets have been cut in half, and the savings program lacks targets and metrics to assess progress.

Given the high and rising spending, DCAS should accelerate efforts to improve its management, monitoring and analysis of leased space to ensure its use is efficient and cost-effective.

City Spending on Leased Space Is High and Growing

Leasing space can be more cost-effective than owning. For example, a City agency may only need part of a building to serve as a field office or client intake center. Leasing also can reduce both the upfront and recurring annual costs of an agency’s space needs. Private landlords can renovate leased space faster and cheaper than the City can in its own buildings, and leases shift responsibility for operations and maintenance to a private owner from the City.

Figure 1 shows City spending on leased space, which includes rent and operating costs, exceeded $1.1 billion in fiscal year 2018. Spending on leased space has grown faster than the total budget over the last decade. (See Figure 2.) After growing at the same rate as the City budget for most of the 2000s, lease costs began growing more rapidly in fiscal year 2009 and accelerated at the start of the de Blasio Administration. From fiscal years 2014 to 2018, lease costs grew 40 percent, far greater than the 20 percent increase in the City budget, the 12 percent increase in asking rents for office space, and the 10 percent increase in the number of full-time City employees. 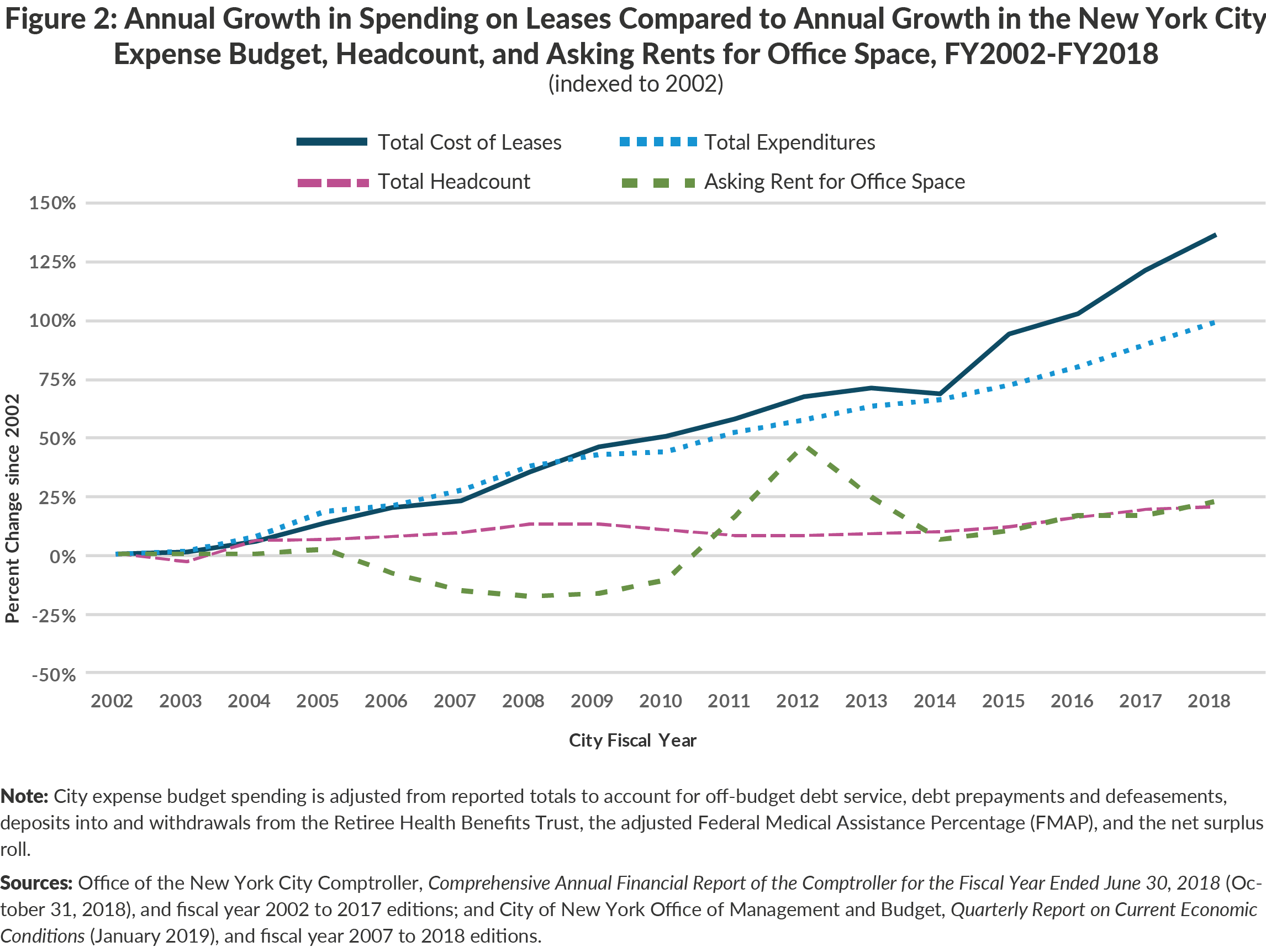 In fiscal year 2020 the City expects to spend $1.2 billion on leased space.4 Nearly one-quarter of that is for the Department of Education (DOE). (See Figure 3.) Agencies with field offices—Human Resource Administration/Department of Social Services (HRA/DSS), Department of Health and Mental Hygiene, and the Administration for Children’s Services (ACS)—represent another 25 percent of lease costs. The New York Police Department (NYPD) is expected to spend $68 million on leases, while two other uniformed agencies, the fire and sanitation departments, are budgeted to spend a combined $52 million.

Agency offices are a large share of leasing costs—representing 22 of the 25 costliest leases (ranked by long-term obligations)—including the Departments of Transportation, Finance, Law, and Information Technology and Telecommunications.5 Many of these agencies have recently signed office leases, which contributes to their high expenditures. HRA’s 4 World Trade Center office is the City’s costliest lease. 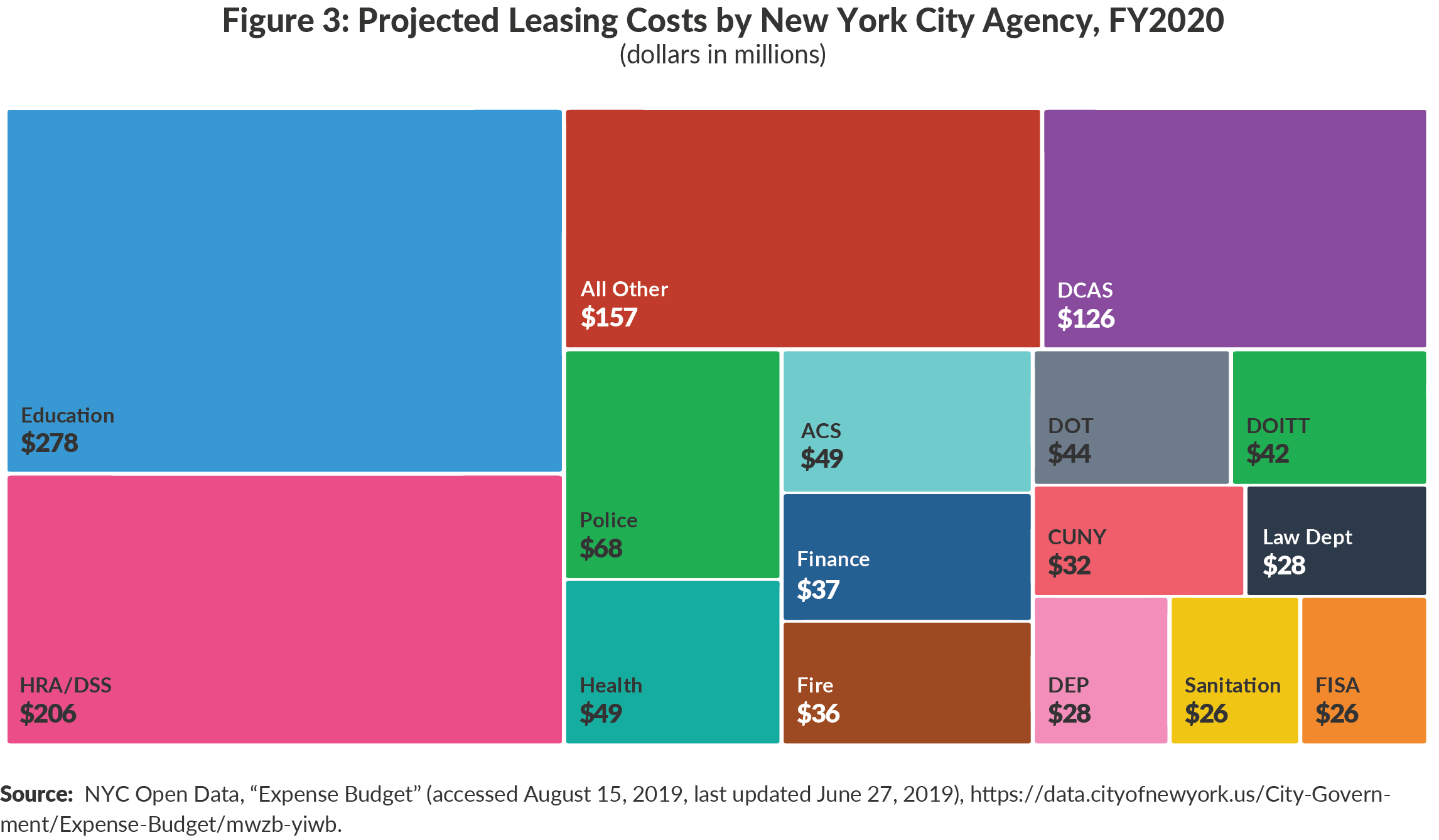 The City Charter tasks DCAS with overseeing the operation and maintenance of city-owned buildings; purchasing or leasing real property for public use; and assigning or relocating agencies to properties owned or leased by the City.6 The Charter requires DCAS to “establish comprehensive and continuing programs and standards for utilization for space owned or leased by the city and to conduct surveys of space utilization,” and to update annually a list of properties in which the City leases space, including information such as the lessor, location, base rent, rentable square footage, and escalation provisions.7 In fiscal year 2018, DCAS oversaw 75 percent of City spending on leased space, or $829 million; agencies managed the remaining 25 percent directly.8

The main challenge in analyzing leased space costs and utilization is the City does not publish a complete record of leases and space use that includes each lease’s costs, square footage, and occupancy. DCAS only publishes data on the locations of buildings where the City leases space and the agencies located at each property. Without the quantity and cost of space leased at each property, the public cannot determine how efficiently it is used or examine what drives rapidly increasing lease costs.

DCAS maintains the Integrated Property Management System (IPIS), a database that identifies every city-owned property and property in which the City leases space. IPIS includes each building’s address and geographic identifiers, the total area of each property’s tax lot, and total gross built square footage from Department of Finance’s Real Property Assessment Data, whether the building is owned or leased, the agency to which the space is assigned, and the space’s primary use.

IPIS includes the number of leases entered into by agency and the purpose of the space; however, it does not include how long the lease is, how much space is occupied, the number of people occupying the space, or the cost to lease the space. While DCAS may study agency space needs at the time a lease is signed, it does not publicly track and publish the data needed to actively manage space on an ongoing basis.

Addressing Inadequate Asset Management Can Produce Savings for the City

Over the last decade, the City has launched multiple efforts to rein in leasing costs. In fiscal year 2010 the Bloomberg Administration launched the Office Space Reduction program to reduce the size of the City’s office portfolio by 1.2 million square feet. DCAS developed new space guidelines to bring the City’s office spaces in line with private sector best practices, with a goal of bring usage to 176 square feet per employee. The City hired a chief asset manager, developed space utilization metrics to identify underutilized space, adopted open plan layouts, and relocated or consolidated agency spaces. DCAS also began reporting the average square footage of office space per employee and the percentage of vacant desks in the Mayor’s Management Report (MMR).

These initiatives were projected to save $13 million starting in 2019 rising to $23 million annually by 2021. The initiatives did not set reduction targets and did not report metrics, such as square footage per employee, to track progress.

Implementation appears to be slow and results limited. Collecting basic data on how much space the City controls has been an initial challenge. The Wall Street Journal reported DCAS launched the space management initiatives in 2018 by setting out to quantify owned and leased space; as of July 2019 DCAS had measured just 3 million of an estimated 37-million-square-foot portfolio.11 The agency expects it will take until the end of fiscal year 2022 to complete its surveying efforts.

Two years into the initiative, savings have also fallen short of expectations. In fiscal year 2019, DCAS realized less than $1 million in budget savings and $2.5 million in avoided costs.12 DCAS now expects to save $8 million in fiscal year 2020 (down from an original goal of $18 million) and just $15 million by 2022 – likely to be less than 1 percent of citywide leasing costs. One reason for DCAS’ modest impact is savings have come from small agencies, like the Public Administrator of New York County and the Commission on Human Rights, and from small spaces occupied by larger agencies. It has yet to achieve substantial savings from the large agency office leases that represent the majority of the City’s leasing budget.

Active management of the City’s real estate portfolio is essential to ensuring that City agencies use space efficiently and minimize costs. Upholding the Charter-mandated obligation to collect, monitor, and publish data on the City’s real estate holdings is an important first step. These data, along with space standards and continuous analysis and management, are essential for DCAS to evaluate whether agencies efficiently use their facilities, whether owning or leasing space is more cost effective, whether expiring leases should be extended or vacated, and whether space utilization is becoming more efficient.