4 Things You Should Know About the MTA's Commuter Railroads

On an average weekday more than 603,000 riders travel across the New York City region on one of the Metropolitan Transportation Authority’s (MTA) two commuter railroads—the Long Island Rail Road (LIRR) and the Metro-North Railroad (Metro-North). Created separately as private railroads, the two have been incorporated into the MTA as part of the regional transit network; they now account for 28 percent of the MTA budget and are supported by taxpayers and the region's motorists.

Here are four things New Yorkers should know about the MTA’s commuter railroads:

The LIRR was chartered in 1834 and went through several expansions and consolidations before it was purchased by the Pennsylvania Railroad in 1900. Ridership soared following completion of tunnels connecting Queens to the newly built Penn Station. However, the rise of the automobile resulted in a decline in ridership.  This decline, coupled with regulated fare structures and rising costs, created financial difficulties that led to the LIRR filing for bankruptcy in 1949. A series of state tax concessions and subsidies kept the LIRR afloat until the State eventually purchased the railroad in 1966.

The LIRR has uniquely challenging characteristics that have a significant impact on operations. First, 10 of 11 LIRR lines converge at its Jamaica station, and many trains must switch across multiple tracks to pass through the station before continuing on to one of the LIRR’s three western terminals—Atlantic Terminal, Long Island City, and Penn Station. Even when operating efficiently, trains must execute these switches slowly; minor issues at the platform or on the track produce cascading delays down multiple train lines.3 Second, while Metro-North has sole control of Grand Central Terminal and its 43 tracks, the LIRR is a tenant at Penn Station, allocated only 9 tracks during peak periods. This restriction at Penn Station requires tightly choreographed train movements in order to make room for subsequent trains and often results in crews moving empty trains to yards on the west side of Manhattan and in Queens.

Yet despite distinct histories and operational idiosyncrasies, the railroads share many similarities. Both serve multicounty regions surrounding New York City and bring commuters into major transportation hubs in Midtown Manhattan. Both rely on unionized workforces that collectively bargain on a pattern basis. The railroads have similar numbers of stations, railcar fleets, and daily scheduled trains, although the LIRR operates 24 hours per day while Metro-North operates approximately 20 hours per day.4 (See Table 1.) After years of significant growth at Metro-North, annual ridership for the two railroads was nearly equal in 2016. Logistical differences in serving two different parts of the region persist, but both railroads have become more alike since joining the MTA. 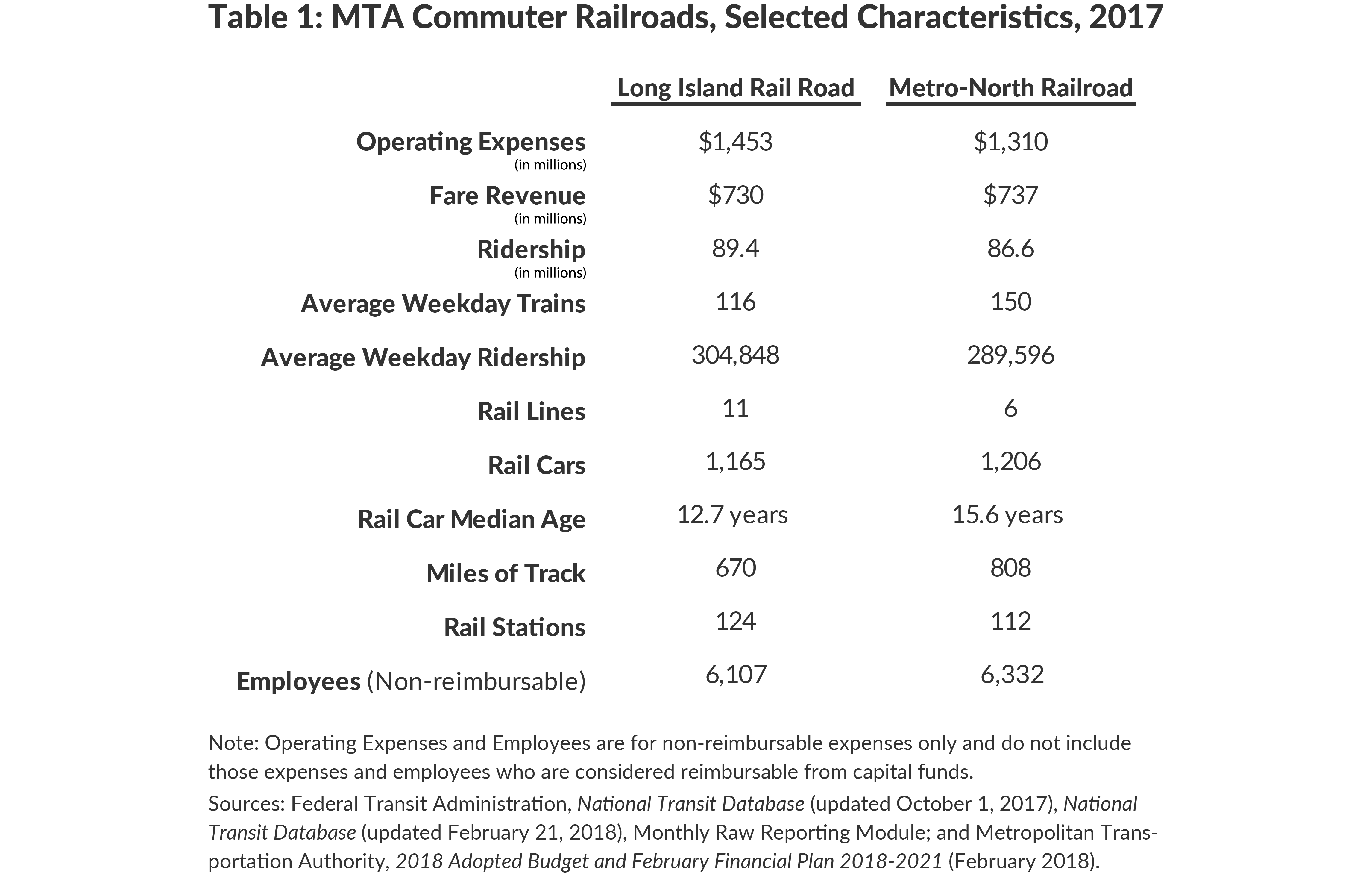 In 2017 LIRR operating expenses totaled $1,453 million, 11 percent more than Metro-North’s $1,310 million.5 According to data compiled by the Federal Transit Administration (FTA), the LIRR spent more per hour of service, mile of service, and ride than Metro-North.6 (See Table 2.)

LIRR operating expenses per hour, per mile, and per ride were 11 percent, 13 percent, and 7 percent higher than corresponding figures at Metro-North. Aligning LIRR per-mile costs with Metro-North in 2017 would have saved $172 million, the equivalent of a 12 percent reduction in railroad operating expenses in that year.

A driver of these unit cost differences is the impact of certain legacy costs at the LIRR. Having continually operated since its original charter, the LIRR provides health benefits to a greater number of retirees. The LIRR also underwrites a closed and underfunded pension plan that has required significant catch-up payments in recent years.7 In 2017 LIRR retiree health insurance expense was $60 million compared to $33 million at Metro-North, and payments to cover the unfunded portion of the closed LIRR pension plan surpassed $32 million. Removing the pension expense related to the LIRR’s closed plan and current retiree health care expenses from unit cost calculations tightens the gap between the two railroads: the LIRR’s operating expenses per hour, per mile, and per ride would be 7 percent, 9 percent, and 3 percent higher than corresponding figures at Metro-North. With these adjustments aligning LIRR per-mile costs with Metro-North in 2017 would have saved $121 million.

Total labor expenses accounted for nearly 72 percent of operating expenses at the commuter railroads in 2017. These expenses include salaries and wages and benefits including pensions, health care for workers and retirees, and other fringe benefits. LIRR labor expenses were 14 percent greater than Metro-North’s—$1,051 million to $925 million; however, the LIRR employed 3.6 percent fewer workers—6,107 to 6,332.8 (See Figure 1.) 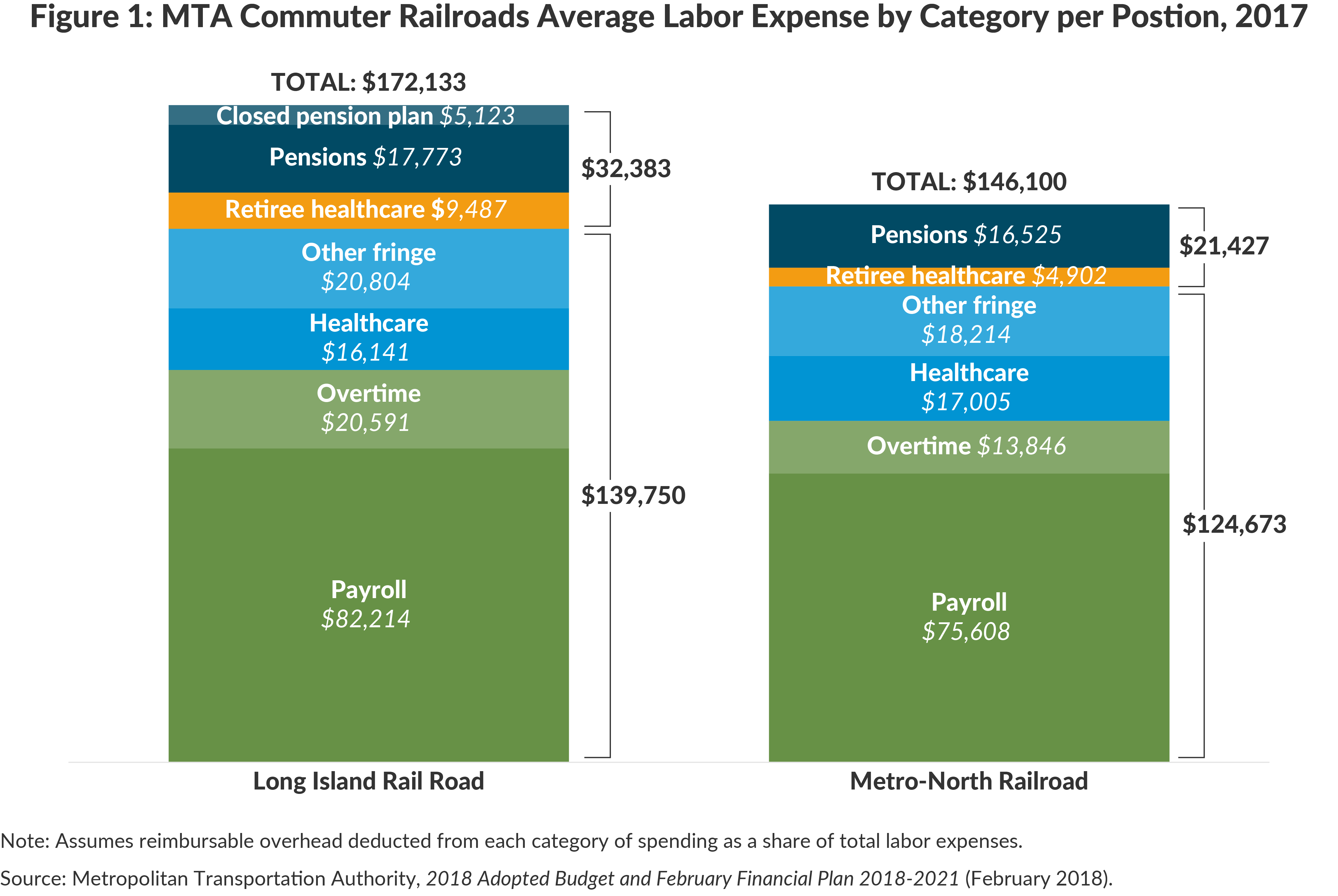 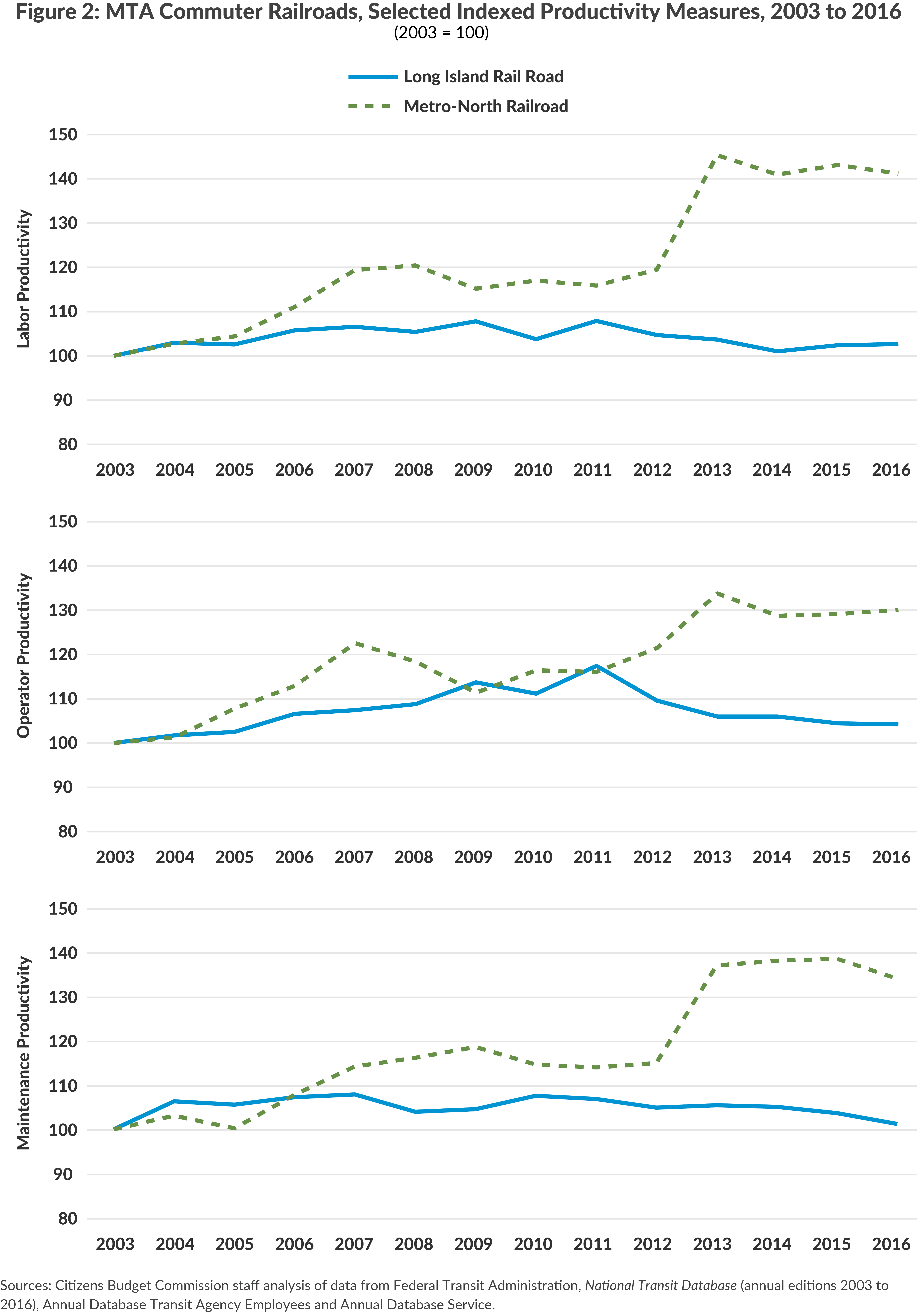 Like most public transit agencies, the MTA’s commuter railroads receive general tax subsidies and cross-subsidies from motorists. The gap between the railroads’ operating expenses and fare revenues is funded from other revenue sources including rentals, advertising, MTA Bridges and Tunnels surpluses, and dedicated taxes and subsidies. But the LIRR covers less of its operating costs than Metro-North; the LIRR’s operating loss accounted for 57 percent of the total for the two commuter railroads in 2017.

The MTA also compares the railroads’ recovery ratios, which include debt service and other centralized MTA costs allocated to each railroad and does not include the aforementioned adjustments. For this measurement LIRR fare revenue is 33 percent of total expenses compared to 40 percent for Metro-North. (See Table 5.) Increasing the share of all LIRR costs covered by fares to the same level as Metro-North would have yielded an estimated $170 million additional fare revenue in 2017.

Labor expenses account for more than half of all commuter railroad costs and grew at an average annual rate of 3.7 percent, more than three times the rate of regional inflation over the past five years.17 Many of the variables in addition to wage rates that drive labor expenses—rules that govern assignments, scheduling and deployment of the workforce, and health benefits and pensions—are subject to collective bargaining. For the MTA commuter railroads, management must come to agreement with as many as 21 different bargaining units.18 Over the last two rounds of collective bargaining the MTA has made progress in generating savings by achieving employee contributions to benefits; however, there has been less success in introducing work rule reforms.

Simply standardizing work rules across the two railroads could help generate savings. For example, Metro-North train crews may be scheduled for split-shift time, meaning they earn a reduced rate during the down time between morning and evening peak periods while LIRR crews cannot. An analysis compiled in 2011 indicated that applying the split shifts to the LIRR could save $13 million annually in overtime alone. Additionally work rules and limited terminal rights at Penn Station coalesce to trigger certain penalty payments to LIRR workers. For example, once an LIRR train enters a yard, work rules state only a yard engineer may move a train; however, in order to meet tight schedules the revenue-service engineer may do the work, triggering a penalty payment in addition to normal wages.19

In 2014 the MTA and the commuter railroad unions reached an agreement on a largely retroactive six and one-half year contract that provided wage increases totaling 17 percent.20 This agreement for the first time required that employees contribute to the cost of their health insurance and that new employees contribute to their pensions for 15 years.21 But the agreement did not contain commitments to increase productivity.

The 2014 deal expired in January 2017, and in the subsequent month the MTA signed a 28-month agreement with the LIRR’s two largest unions that included wage increases totaling 5 percent and a one-time $500 bonus.22 Based on this agreement, the MTA does not expect to gain productivity commitments from this round of collective bargaining, representing a lost opportunity to impact meaningfully the finances of the commuter railroads. However, another round of bargaining will take effect in early 2019, and MTA management should begin identifying its agenda for improved productivity.

A draft of this policy brief was sent to the Metropolitan Transportation Authority officials, as well as other interested parties. We are grateful for their comments and suggestions.

4 Things You Should Know About the MTA's Commuter Railroads