Over the weekend the State Division of the Budget released the financial plan report accompanying the enacted fiscal year 2014 budget. The financial plan includes details of the budget for the current fiscal year and its implications for the next three fiscal years through March 31, 2017. The report tells a troubling story. Although spending growth in the current year will remain close to 2% (a cap on growth agreed to by the Governor and the Legislature), the adopted budget added $1.8 billion in annual commitments by the final year of the financial plan — paid for with tax increases, non-recurring resources, and boosted revenue forecasts. 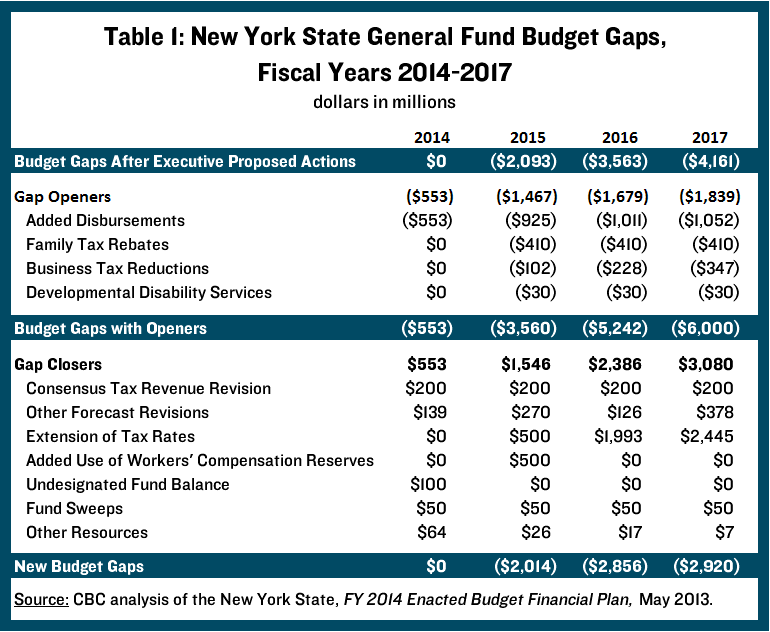 State leaders also committed to $677 million in new business tax breaks over three years. Two of these measures – a tax credit for small businesses and a rate reduction for manufacturers – start in tax year 2014, increase over the next few years, and then become permanent. Other business tax breaks include credits for employers of students aged 16 to 19 to offset the minimum wage increase and employers of veterans. These tax breaks add to the $2.6 billion in existing preferential state tax provisions for businesses.

The Legislature also committed to poorly targeted personal income tax rebates for families earning between $40,000 and $300,000, at an estimated cost of $410 million per year. Similar to the Middle-Class School Tax Relief (STAR) rebate program which ended in 2009, these rebates bear no relationship to a household’s actual property tax or rent burden.

Paying for the Added Commitments

New resources – re-estimates of the baseline forecast, tax increases, and one-shots – are expected to pay for the new commitments. Revisions to the tax revenue forecast increased expected receipts for this fiscal year by $245 million, and other re-estimates added another $94 million. Base tax revenue growth (that is, growth adjusted for changes to state law) is now projected to be 4.6% after growth of 5.8% in fiscal year 2013. This is a risky projection, because last year’s high growth was partly due to accelerated tax payments in response to changes in federal tax rates and will not recur. Indeed, even with this windfall, 2013 tax revenue fell $70 million short of the projection made last April, marking six consecutive years of tax shortfalls.

Even this infusion of tax revenue is not enough to cover all the new spending. A major one-shot was also relied upon. A shift in the accounting method for financing workers’ compensation – originally proposed by the Governor – provides a $1.75 billion cash infusion. Although the Governor’s original proposal included $750 million of prudent uses for pay-go capital and debt reduction, the temptation to spend proved too great to resist. The enacted budget authorizes $250 million this year for debt reduction or “fiscal uncertainties” and $1.5 billion for future spending. Consequently, state leaders were able to claim an additional $500 million reduction in future deficits and plow $1 billion of added revenue into fiscal year 2015 – the first year the back-loaded increases hit seriously.

State leaders passed responsible budgets in the last two years, dramatically improving New York’s fiscal outlook. Medicaid and school aid growth were contained; the size of the state workforce was reduced; reasonable labor contracts were negotiated; and a less costly tier of pension benefits was adopted. In contrast, the adopted budget this year, while on time, reverted to some of the unfortunate practices of the not too distant past.