On Sunday the Metropolitan Transportation Authority (MTA) opened its Hudson Yards subway station at 34th Street and 11th Avenue, the first expansion of the subway system since 1989. This brand-new terminus of the

train is a stark contrast to the stations on the rest of that line and underscores the need to bring all subway stations to a safe and functional status referred to as a “state of good repair” (SGR).

A recent Citizens Budget Commission Policy Brief used data from the MTA’s survey of station conditions to describe the status of all 467 active subway stations individually and by borough; it also found that the MTA’s current investment policies would not achieve SGR for all stations until at least 2067.1 This blog post describes the condition of subway stations for each of the 21 lettered or numbered lines. 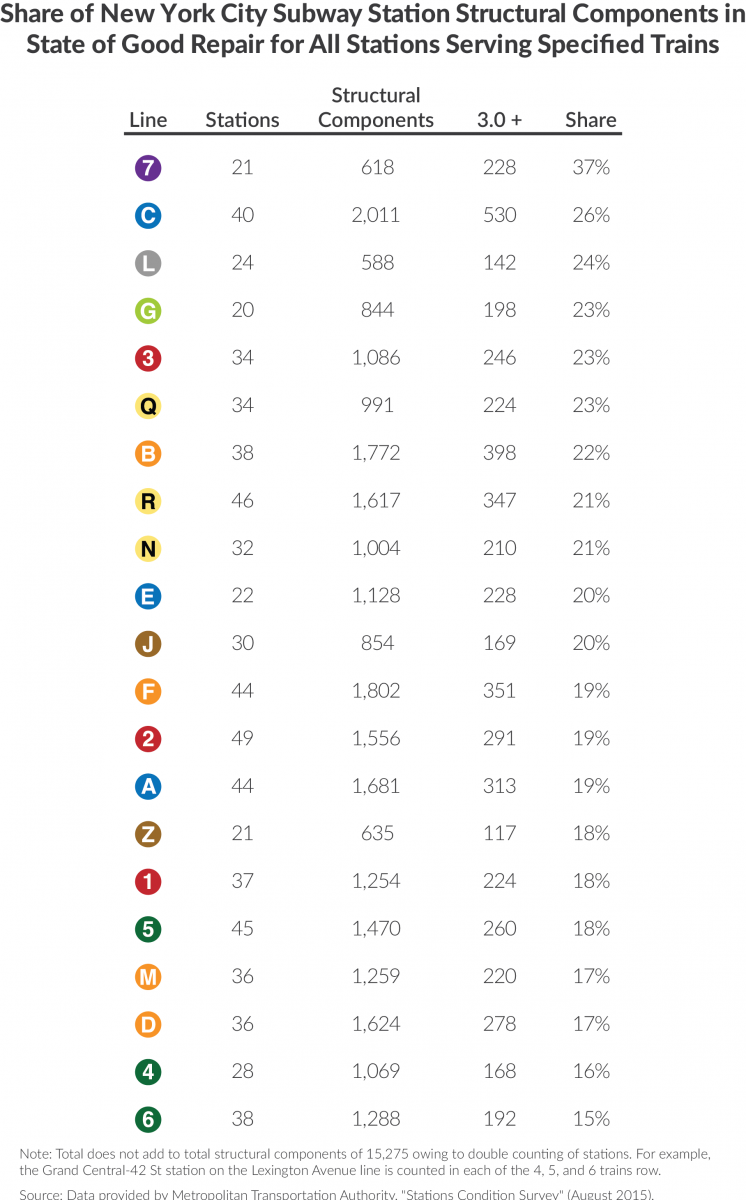 Using this standard, the worst line is the

; its 21 stations have 37 percent of their 618 structural components not in SGR. The second worst line is the

is in the best condition; its 38 stations have only 15 percent of their 1,288 components not in SGR. This favorable rating is partly attributable to the planned completion of six renewals of

stations in the Bronx as part of the MTA’s 2010-2014 capital plan. Stations served by

trains also rank favorably with 18 percent and 16 percent, respectively, of their stations’ structural components not in SGR. Likewise, a high mark for

stations (17 percent not in SGR) is supported by planned completion of five renewals along Myrtle Avenue in Brooklyn and Queens.3

The MTA’s proposed, but not yet approved, 2015-2019 capital program includes improvements to components at 199 stations including 19 relatively comprehensive station renewals. The renewals are expected to fix 327 structural components, including 124 components at

stations and 89 components at

stations. These investments would decrease the share of components not in SGR for stations served by these lines to 17 percent, 12 percent, and 14 percent, respectively.4

Readers can explore the condition of individual stations along a subway route and see how conditions vary among lines using the Citizens Budget Commission’s interactive map.

By Jamison Dague and Charles Brecher