The New York State Fiscal Year 2018 Executive Budget includes three proposals to reduce the State’s cost of providing retiree health insurance. These proposals would save $18.8 million in fiscal year 2018, but this modest short-term saving understates the importance to the State’s long-term fiscal stability: the proposals would reduce the State’s $78 billion liability for other post-employment benefits (OPEB) more than one-third. In addition, the Budget proposes to create a trust fund to accumulate resources to address this liability. The Legislature should adopt these sensible proposals and develop a plan to require regular deposits to the fund.

As defined by the Governmental Accounting Standards Board, OPEB represents any benefit to public retirees other than pensions. OPEB includes life insurance, disability payments, and other benefits, but the largest and most significant benefit is for health care.1 New York State offers health insurance to its retirees but does not set aside funds as current employees earn health insurance coverage in retirement; instead, the State uses a “pay-as-you-go” approach, paying retiree health insurance premiums as they come due. This currently costs approximately $1.3 billion annually.2 Of the 1.2 million enrollees in the New York State Health Insurance Program (NYSHIP), about 325,000 are active employees, 275,000 are retirees, and 600,000 are covered dependents. The commitment to provide retiree health coverage to employees, retirees, and their dependents produces an OPEB liability valued at approximately $78 billion.3 This liability is the second largest of any state—only California has a greater liability.4 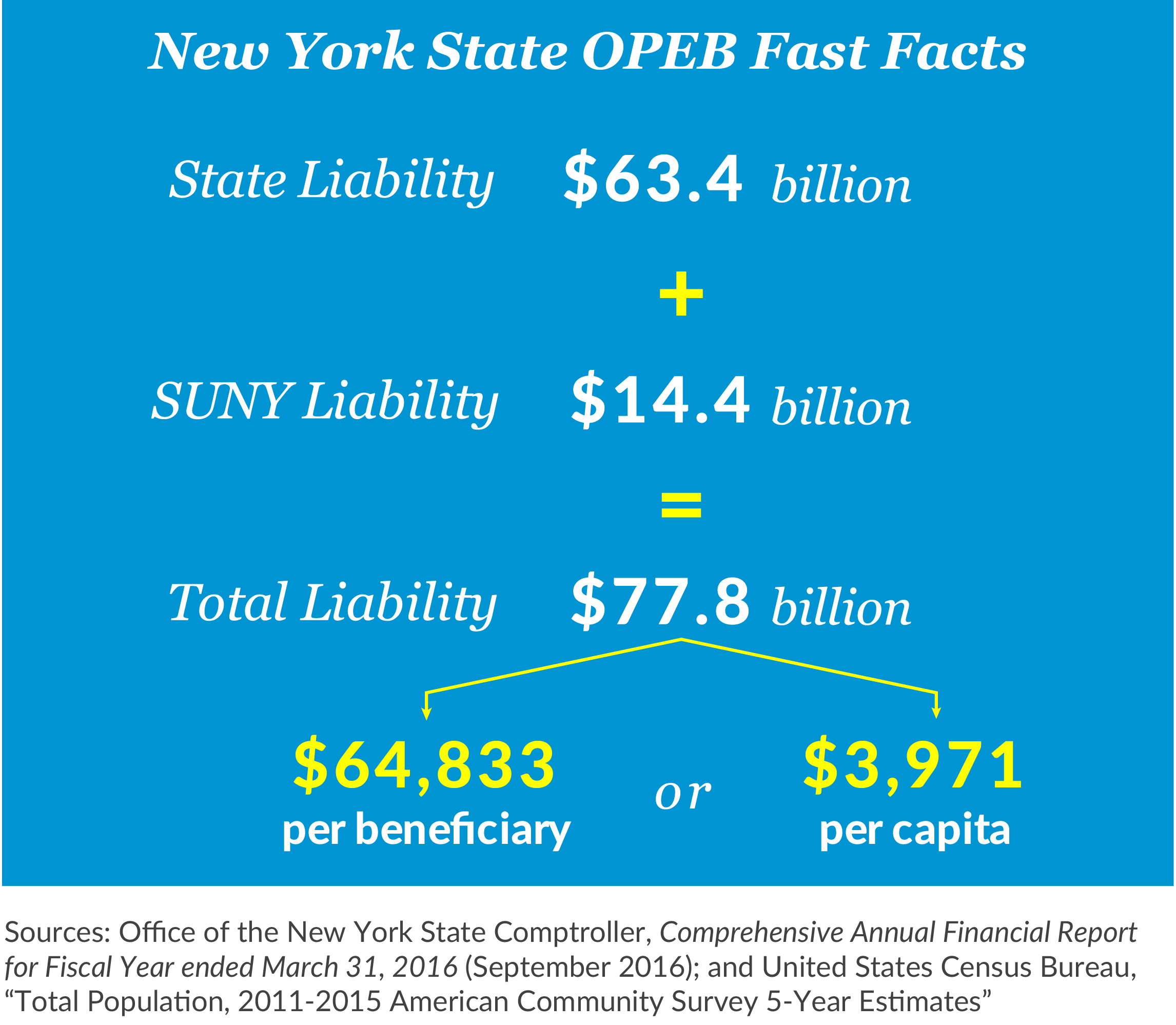 New York’s OPEB liability is large because of the expansive benefits provided to retirees. Currently retirees pay a varying proportion of their health insurance premiums based on their retirement date and salary level, but no adjustments are made based on length of service. The State also pays the entire Medicare Part B premium for retirees, including the progressively-adjusted amounts charged to high-income retirees.5

Proposals to Reduce OPEB Should be Adopted

The Fiscal Year 2018 Executive Budget makes three proposals to increase employee and retiree premium-sharing, which would generate short-term budget savings and  produce a significant reduction to the State’s OPEB liability.

Proposal to Create an OPEB Trust Fund Should be Strengthened

The Executive Budget also proposes the creation of a special investment fund under the control of the Commissioner of Civil Service. The creation of this fund is important because it allows the State to begin prefunding its OPEB liabilities, which is considered a best practice in public finance.7

Prefunding is beneficial for three reasons. First, it allows the State to earn interest on deposits. Second, this approach promotes intergenerational equity since current taxpayers will fund the cost of current employees rather than passing this burden on to future New Yorkers. Third, it mirrors the funding of pension obligations, which are financed in an ongoing fashion with investments made by the State Comptroller as employees earn benefits. In this manner, the State would finance its OPEB obligation in a more cost-effective and equitable way. 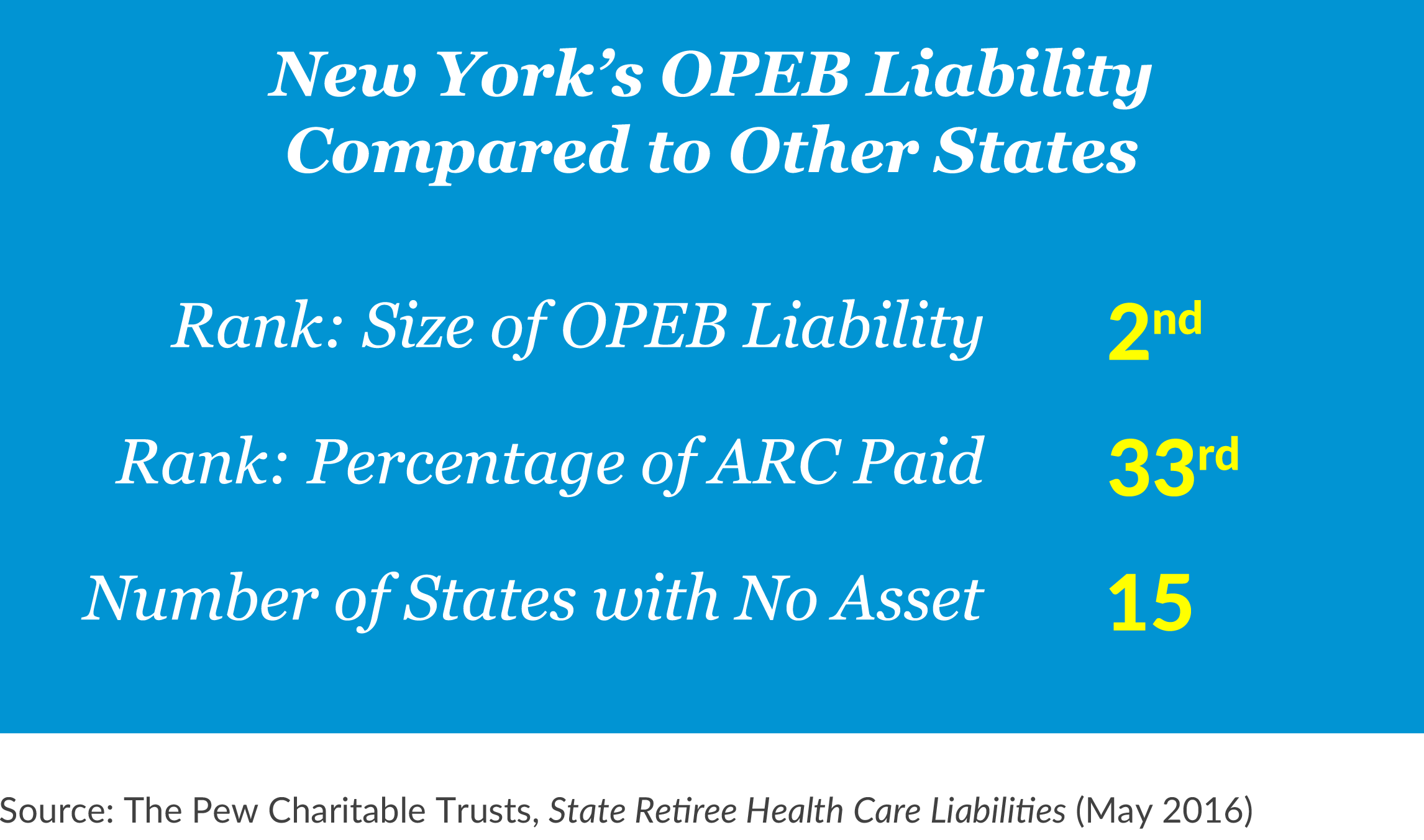 The OPEB Trust Fund proposal is incomplete, however. The relevance of the OPEB Trust is based on its deposits. An empty account does not help the State finance its liability, and the OPEB Trust proposal does not compel the State to make deposits. The language allows the Director of the Budget to transfer a portion of any future General Fund surpluses to the OPEB Trust, but does not specify in what amounts.

The State’s Comprehensive Annual Financial Report presents OPEB liability, including the annual required contribution (ARC). The ARC is the amount the State would need to set aside in a year to pay for OPEB liabilities accrued during the year and pay off currently unfunded liabilities over a 30-year period. Fully funding the ARC – a practice followed by only three states in 2013 – would require New York State roughly to triple its annual retiree health insurance costs. As of fiscal year 2016, the State’s ARC was projected at $3.3 billion.8 Any reductions to the State’s total OPEB liability would also reduce the ARC, making sufficient annual funding more achievable.

While this level of funding may not be practical in the short term, the State should develop a plan for making regular deposits into the Trust. Funding an OPEB liability with a trust can improve a government’s finances and credit rating. For example, Fitch Ratings considers exceptionally large OPEB liabilities in the context of a State government’s overall liabilities, but recognizes that OPEB liabilities are more flexible than other debts and pension obligations.9 Similarly, it is important to have a plan for when withdrawals from the Trust are appropriate. Without a codified deposit and withdrawal policy, the benefits of the OPEB Trust are limited in terms of finance and credit.

The Governor’s proposals related to OPEB should be adopted, and legislators should include a plan for funding the proposed OPEB Trust Fund. Without a plan to make deposits and withdrawals from this account, this proposal does little to promote fiscal prudence and equity. While the State’s OPEB liability will remain substantial even with these proposals, their enactment would help to contain this liability and place the State on a more stable fiscal footing.