Cause for Concern with the Medicaid Redesign Team Implementation

The progress report on implementation of the Medicaid Redesign Team’s (MRT) recommendations issued last week by the New York State Department of Health (DOH) indicates that New York is roughly halfway to meeting its budgeted savings target of $2.2 billion for fiscal year 2012. A closer look suggests there is cause for concern that some of the savings may not be implemented on time.

The DOH indicates that reform proposals with savings totaling more than $1 billion have been implemented.[1] As Table 1 indicates, two-thirds of these realized savings come from payment rate reductions for providers. These include across-the-board rate cuts and the elimination of the annual, inflation-based rate increase previously granted to providers. The MRT package was heavily weighted towards these provider payment reductions. While these measures were by no means easy to implement, relative to reforms that would control the utilization of services by recipients, savings from rate reductions are the MRT’s low-hanging fruit.

Just one-quarter of the Medicaid savings booked thus far come from utilization control proposals. The State’s new indemnity fund to pay for care provided to infants with neurological injuries accounts for another $80 million in savings. The indemnity fund had been part of a larger medical malpractice reform proposal that would have capped non-economic damages, which was rejected by the legislature.

The State still must implement more than $1 billion in MRT recommended savings. Table 2 shows that the bulk ($640 million or 60 percent) of the savings considered to be “in progress” come from the Global Medicaid Spending Cap; another 21 percent of the remaining savings fall under the utilization control category. (See Table 3 for highlights).

One of the more controversial MRT proposals is the Global Medicaid Spending Cap, which limits annual expenditure growth to the ten-year average of the medical component of the consumer price index (roughly 4 percent). The cap provision calls for “provider-led” savings of $640 million in fiscal year 2012 and $1.5 billion in fiscal year 2013. If providers are not able to keep spending below the threshold, the Health Commissioner is empowered to do so by making rate reductions or with other measures.

So far, the spending cap appears to be successful. A report released for August shows that spending was below the threshold by $173 million, or 2.5 percent. However, there could be significant obstacles to achieving the full annual savings target set by the cap. In particular, the DOH has highlighted its concerns over higher than anticipated enrollment in Family Health Plus and managed care. As of September, enrollment in Family Health Plus (a Medicaid program for families with children) has increased 3.6 percent since April and 8 percent since September of last year. Likewise, managed care enrollment has increased 2.4 percent since April and 6.2 percent since last September. Thus far, the enrollment increases have led to relatively small spending variances above projections. However, the cap would come under pressure if the economy slides into another recession and enrollments spike.

Implementing the programmatic cost-savings approved in the utilization control category may be another obstacle to achieving the overall Medicaid savings goal. In general, these measures seek to reduce excessive utilization, or change the way that services are provided in certain areas – a challenging task.

Time is growing short in the fiscal year for the state to implement these measures and realize the projected savings. Table 3 outlines the cost-savings measures in the utilization control category that have been implemented and are still labeled “in progress” by DOH. 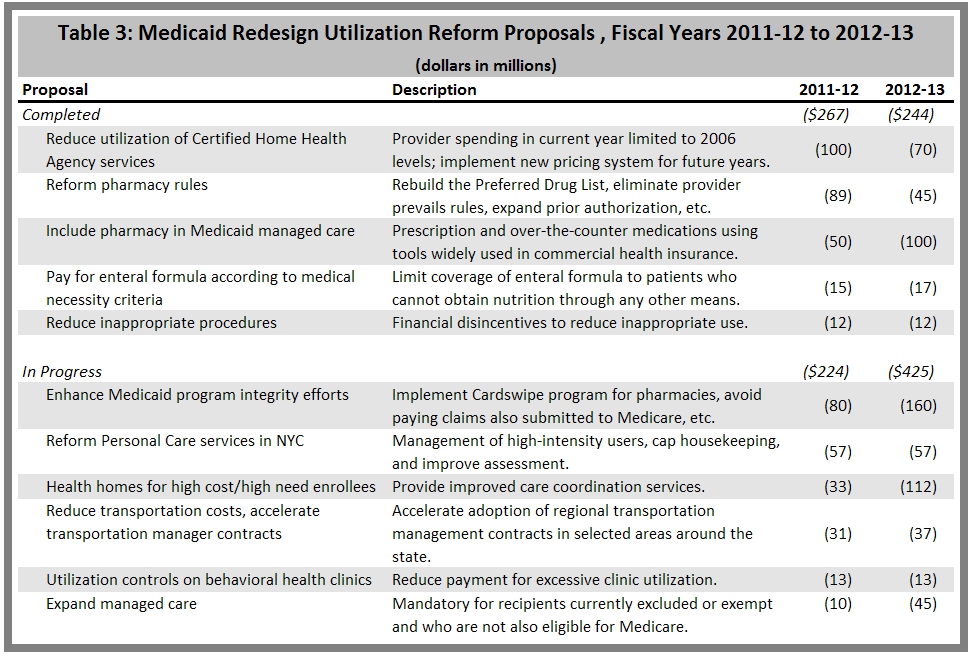 State officials deserve praise for implementing many reform measures rapidly and starting to move the massive Medicaid program towards greater efficiency. However, much work needs to be done before the State can reach its savings goals for this fiscal year. Another economic decline could drive enrollment higher and put further pressure on providers trying to live within the Medicaid spending cap. Delays in implementing some specific measures could put current year savings targets at risk.

The slow pace in implementing some of the utilization control measures also may portend more serious obstacles for the Medicaid budget in fiscal year 2013 and beyond. MRT subcommittees have been developing a second round of recommendations for comprehensive, long-term reforms that will be sent to Governor Andrew Cuomo in the coming weeks. This second phase is meant to mold a Medicaid program that can live within the new fiscal discipline for the long run. The experience so far from phase one suggests that won’t be easy.

[1] Based on savings estimates published in March. Estimates for specific provisions do not total to revised overall savings goal of $2.2 billion reflected in enacted budget from May. New York State Division of Budget, “Five-Year Financial Plan – Updated for Governor’s Amendments and Forecast Revisions,” March 3, 2011.