On December 15th, about 41,600 retired New York City police, fire, and correction officers will receive a $12,000 check.  This payment, known as the Variable Supplement Fund (VSF) payment and informally referred to as the “Christmas bonus,” is made annually to eligible retirees in addition to their regular pension. These payments will total approximately $500 million in 2014. VSF payments are not only a benefit typically not available to retired officers in other jurisdictions, they also are a drain on the fiscal health of the pension funds. Police and fire personnel each have a separate pension fund; correction officers are part of a larger general city employee pension fund.

VSF payments stem from an agreement made between union and City leaders in 1968.  As City leaders sought to increase the investment return of the pension funds by diversifying their portfolios, union representatives on boards of the police and fire pension funds agreed to allow investments in equities on the condition that “excess” earnings (that is, those above certain target rates) would be used to provide a supplemental payment for retirees.  The supplemental benefits were “variable” each year, determined entirely by the strength of investment earnings: in some years, retirees received a check and in others they did not.

In 1993 the arrangement changed. The payments for police and fire retirees were converted to guaranteed fixed payments set to increase by $500 each year until 2007, when they reached $12,000.[1]  Payments for correction officers, which were established at a later date, continue to vary based on investment returns.

Police and fire retirees who do not receive disability pensions are eligible for the benefit, and legislation approved in 2002 allows those who are eligible for retirement but choose to remain on the force to have the VSF payment “banked” for them until they retire.  As of June 30, 2013, there were 41,603 VSF recipients.[2] Almost 70 percent, or 28,773, were retired police “superiors” – detectives, sergeants, lieutenants, and captains (41 percent) – or police officers (28 percent). Firefighters or fire officers comprised 13 percent.  Fewer firefighters receive VSF payments because of the smaller size of the fire department and the high rate of disability pensions.  Approximately one-third of all fire retirees receive a VSF payment, compared to 62 percent of police retirees.

Since most of the payments are now fixed, VSF payments have been funded like other pension benefits using actuarial standards to establish a balance required to meet future obligations. VSF balances are maintained with funds transferred from the regular pension funds. The amounts of the annual transfers are based on (1) the performance of the pension funds’ equities portfolio and (2) the accrued value of VSF benefits.  If the return on equities is higher than the 12-month average return on 10-year Treasury bond rates, then VSFs receive a transfer of the earnings; this transfer cannot provide for VSF asset balances that exceed the accrued value of benefits for each VSF. If equities’ performance drops below the treasury benchmark, it triggers a “deficit” which needs to be made up in years when market performance is stronger; furthermore, any shortfall in resources to pay benefits must be covered by the City's pension funds. 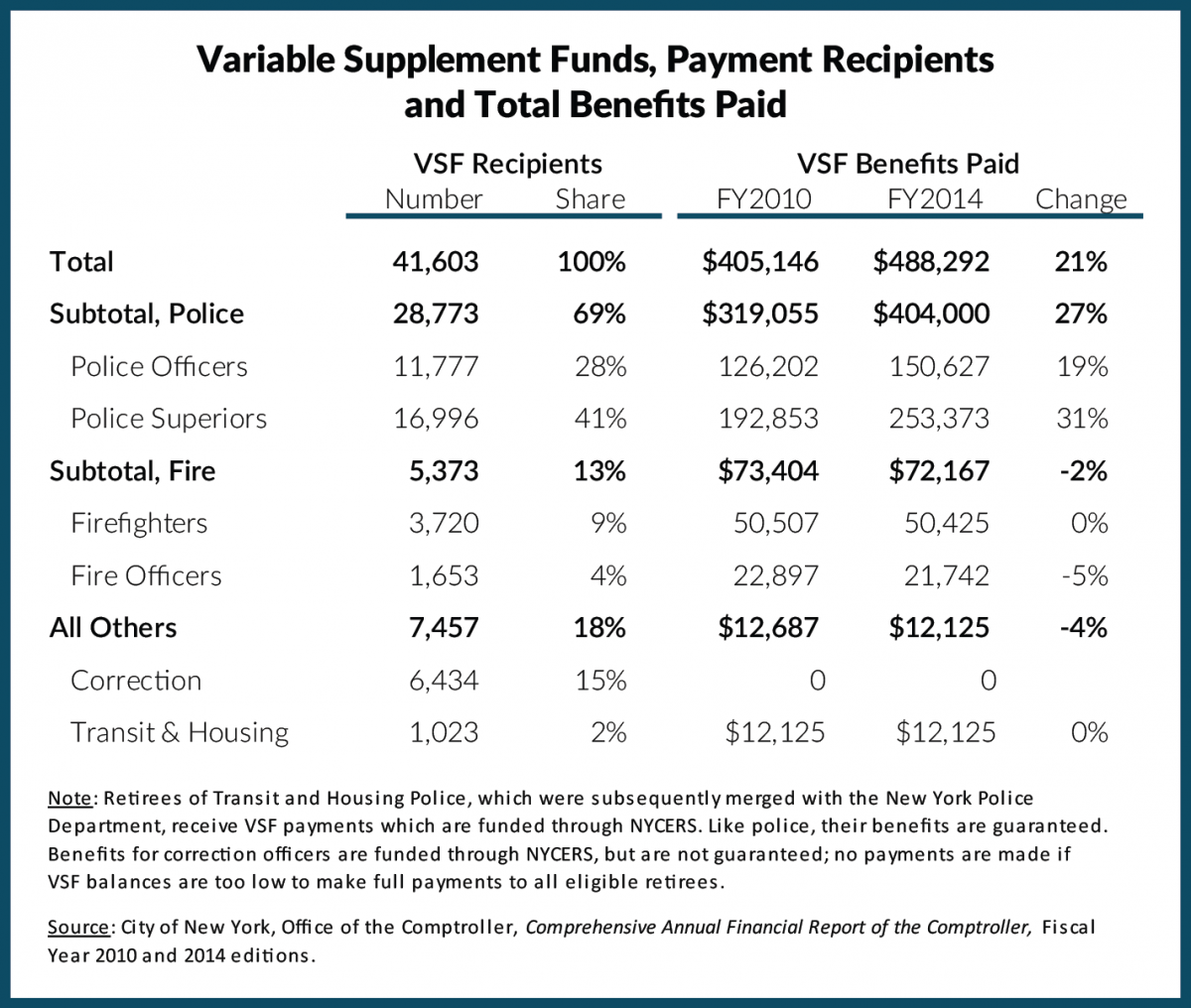 For more than a decade, VSFs had ample resources to pay benefits without transfers from the pension funds.   VSF assets began to decline in 2007, as the stock market faltered, VSF benefits reached $12,000 per retiree, and the number of recipients grew steadily.  In fiscal year 2013, the VSF for police superiors experienced a shortfall requiring an $8.2 million transfer from the police pension fund to pay beneficiaries.  More importantly, the exceptional investment returns of the City’s pension funds in fiscal year 2014 led to a $2.9 billion transfer from the pension funds to the VSFs, which increased their net assets from $989 million to $3,540 million. The transfers made up for “deficits” from prior years.

The underfunding of the City’s pension liabilities makes the transfers particularly worrisome. The City’s five pension funds range from a funded ratio of 63 percent for the fire pension fund to 75 percent for the city employees retirement system.  The City has a plan to fully fund its pension system over the next 20 years; asset transfers for VSFs undermine the pace at which the City can implement that plan and require City taxpayers to make up the difference to keep to schedule. This pressure is most acute when the pension funds experience investment losses, as they did in 2001, 2002, 2008, and 2009, that require large additional pension contributions from the City’s operating budget. Pension contributions are $8.6 billion and 11.3 percent of the fiscal year 2015 budget; strong investment returns are necessary to limit further growth in the City’s contributions.

Unlike regular pension benefits, VSF payments are not constitutionally protected. Since they are managed as separate fiduciary funds and are not considered a part of the pension system, they can be reduced, mitigated or eliminated by the State Legislature.  Phasing out or eliminating the VSF should be part of the Mayor and City Council’s agenda in Albany next year. Gradually eliminating these unusual pension bonuses for retirees would enhance the fiscal condition of the pension funds and reduce the needed contributions from taxpayers.