When Mayor Bill de Blasio presented his first effort at making municipal government more efficient through a Citywide Savings Program (CSP) in the Executive Budget for Fiscal Year 2016, the Citizens Budget Commission urged that "the baby steps in this program should become bolder strides." The critique of the initial effort was it was too small and did not rely enough on efficiency gains as opposed to other savings devices, such as debt refunding.  This year, the Mayor introduced a new CSP in the January 2016 Financial Plan and expanded it in the April 2016 Executive Budget for Fiscal Year 2017.  The program has become notably larger, but more progress is needed in generating savings from increasing productivity of city government.

The latest CSP proposes multiyear savings of $5.4 billion compared to just $2.9 billion proposed in last year’s Executive Budget.  The $5.4 billion represents 1.7 percent of city-funded spending over the financial plan period; this is in the range of savings in Mayor Michael Bloomberg’s plans for each of the last four years of his administration. While this may seem like a bold stride, the new CSP still falls short in the nature of its savings proposals. 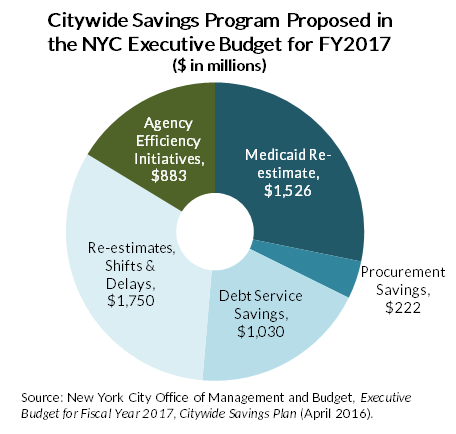 The CSP continues to rely extensively on initiatives that do not make agency services more efficient or are highly uncertain.  At best, only one of every six dollars in the CSP is from savings in agency operations. The bulk of the plan for savings consists of four alternative approaches.

The largest single source of savings, totaling $1.5 billion or 28 percent of the plan, is a claim for a reduced payment to the State for the City’s share of the Medicaid program.  The claim is based on a provision of the federal Affordable Care Act of 2010 that increases federal funding for some Medicaid recipients. The City asserts the States must share these savings with localities, but the State has not yet agreed.

About $1.0 billion or nearly one-fifth of the savings is derived from reductions in required debt service payments.  These savings come predominantly from lower-than-expected interest rates for variable rate debt and from refinancing debt at lower interest rates.  Another $220 million in savings is attributed to procurement reforms, but these initiatives are unspecified and thus uncertain.

About $1.8 billion in savings—almost one-third— are an amalgam of spending re-estimates, funding shifts, spending delays, and accruals. These measures do not make agencies more efficient; they generally change only the source or timing of expenditures, and City Council Members have expressed concern about these items being counted as savings.1

Only 16 percent of total savings ($883 million) comes from agency efficiency measures.  The plan’s meaningful savings initiatives include $156 million from shifting shelter residents into supportive housing, $143 million in lower judgments and claims due to process changes in the Law Department, $26 million from switching to LED streetlights, and $20 million from increased productivity in highway inspections. Although some uncertainty exists about how easily these changes can be implemented, they have the potential to create lasting savings and improve services.

The increased size of the CSP is a step in the right direction,  but too little of the savings are from agencies thinking strategically and creatively about how to provide value to taxpayers and do more with less.  The administration should continue to build on the progress in the CSP by focusing more on efficiency initiatives. 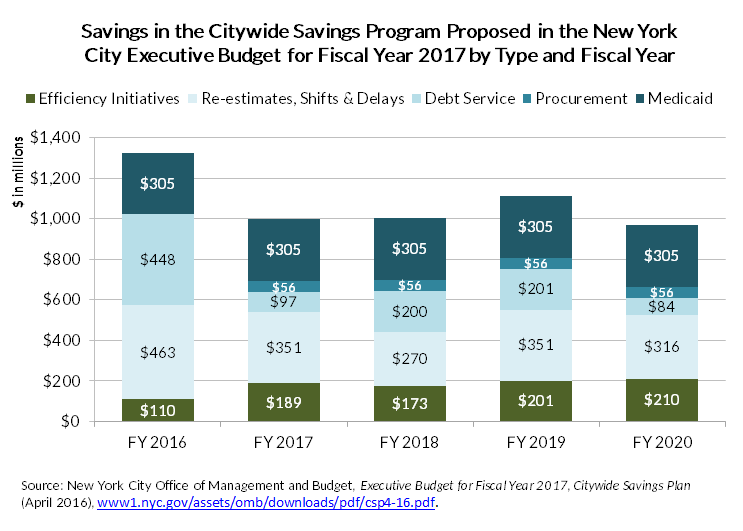