Are Child Welfare Preventive Services Worth the Investment?

The New York City Fiscal Year 2018 Adopted Budget for the Administration for Children’s Services (ACS) projects $313 million in spending on “preventive services” intended to prevent maltreatment of children and foster care entry. This is a 42 percent increase in spending from Mayor Bill de Blasio’s first year in office and is intended to increase service capacity by 28 percent, from 12,500 to 16,000 preventive slots in fiscal year 2019. Given the planned expansion, greater scrutiny is needed to determine to whether preventive services are effective in preventing repeated abuse and reducing the need for foster care placement.

This blog finds ACS’s current reporting is insufficient to determine whether or not preventive services are meeting their goals and argues further investment should be contingent upon a more thorough public reporting on outcomes.

The creation of ACS as its own agency in 1996 coincided with a growing consensus that foster care had negative effects on children.1 Long-term studies of former foster children find they are more likely to have contact with the criminal justice system, have higher teen birthrates, and have lesser earning power than those who remain at home.2 One of ACS’s central goals has been to reduce foster care placements by offering preventive services to families while the child remains in the home.  Preventive services include an array of interventions to address the underlying causes of family crisis. (See text box.)

Referrals to preventive services are typically made following an ACS investigation into whether child abuse, neglect, and/or maltreatment have occurred. Services are provided by contracted social service agencies, over which ACS provides oversight.  A family is referred to a specific preventive service model depending on its needs. Of the roughly 9,600 new cases between April 2016 and March 2017:

Social service agencies are contracted by the City to provide a certain number of preventive service slots each year. Each slot can provide services to one or more families over the course of the year depending on the length of services, and a single slot typically serves more than one family in a given year.5 The number of slots increased to 11,000 in fiscal year 2001 from just more than 9,000 in the prior year.6 The number of slots has been fairly stable since then, averaging 12,000 in fiscal year 2016, while the number of children served has fluctuated.7 (See Figure 1.) 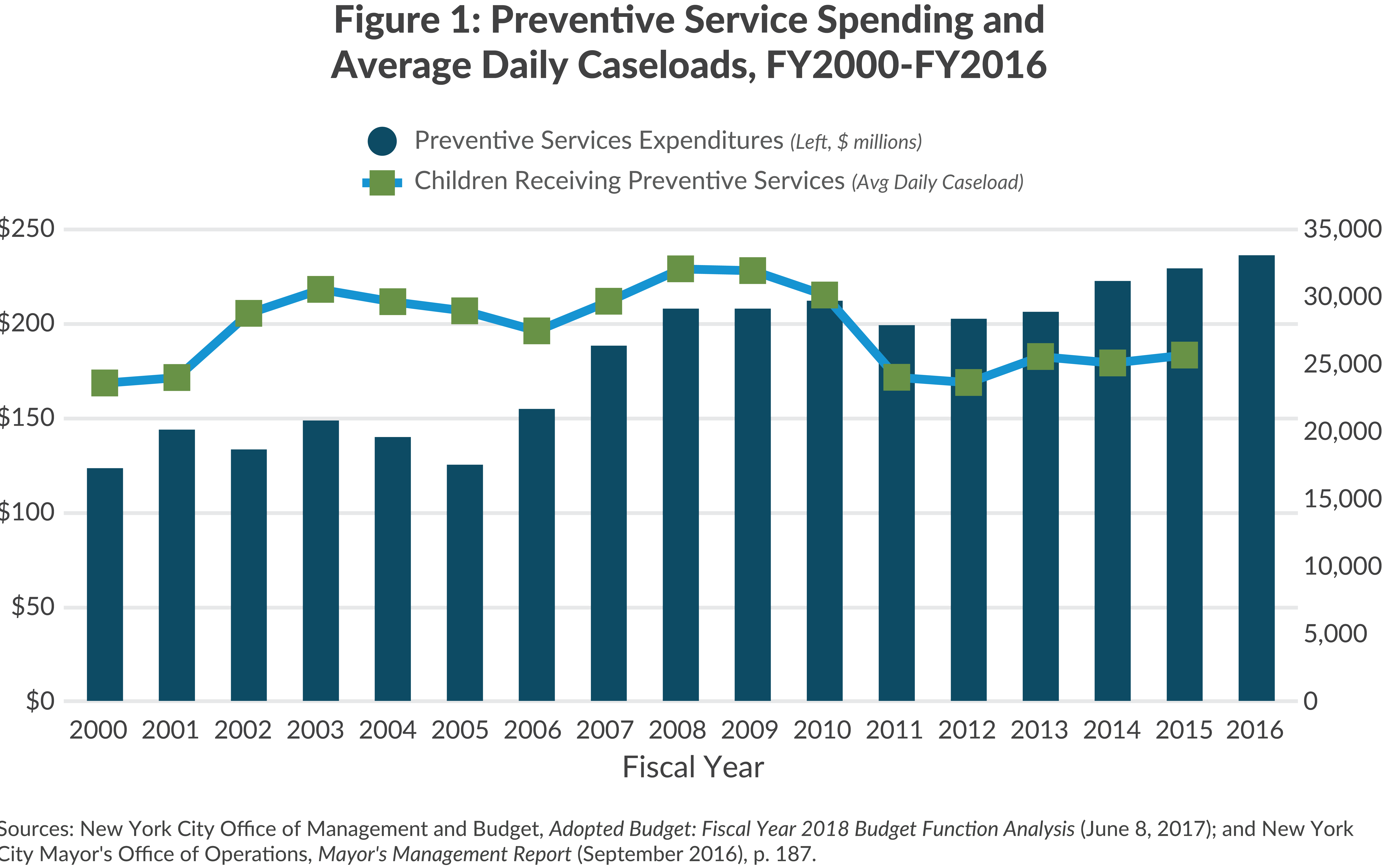 The Adopted Budget for Fiscal Year 2017 added 3,000 additional slots (a 23 percent increase), increased per slot funding, enhanced provider training programs, and increased the number of ACS staff who work directly with preventive providers to facilitate casework.10 ACS preventive services for children being discharged from foster care were expanded and are expected to reach the roughly 1,500 families who are reunifying in fiscal year 2018.11 Table 1 details the projected increase in funding for this expansion of services, which will total $41.2 million in fiscal year 2018 and increase to $53 million thereafter.

Additional funding has been added for preventive services in the last year to pay for staff training and for more facilitators at the social service agencies to implement new case conferencing protocols.  ACS has also set aside greater resources to increase provider budgets once it completes a planned review of contract provider funding. By fiscal year 2019 the City expects to have 16,000 available preventive slots.12

The increasingly central role preventive services play in New York City’s child welfare system and the planned expansion of these services demand that their effectiveness be measured. Are these services achieving their goals to reduce foster care placements and reduce repeated maltreatment? Publicly available data are insufficient to answer the question because the data are not disaggregated to demonstrate outcomes for families receiving preventive services.

The lack of public data has been an issue for some time. In 2001 a Child Welfare Advisory Panel called for the creation of a system to evaluate preventive services after concerns about their effectiveness were raised in the Marisol v. Giuliani case.16 No action was taken until ACS created a Scorecard in 2008 to monitor providers and shift slots away from underperforming ones. ACS recently published the fiscal year 2016 provider Scorecard, but has not done so consistently in past years, and audits by the Office of the New York City Comptroller and Department of Investigation have found ACS’s oversight lacking.17 The Mayor’s Management Report includes only four indicators for preventive services, all of which measure caseloads rather than quality or outcomes.18 Similarly, the information contained in ACS’s Monthly Flash Reports and annual Child Welfare Indicators Report is limited to caseload and referral volumes.

Some changes may be on the horizon. ACS reports it is planning to unveil a new public data dashboard to track engagement and outcomes in preventive services.19 In addition, City Council Members Mark Levine, Elizabeth Crowley, and Margaret Chin introduced a bill (Intro 1374-2016) to enhance the reporting requirements for preventive services in December 2016.20 The bill, currently in Committee, is a step in the right direction and would require monthly reporting on preventive caseloads; families who enter foster care during the month who previously received preventive services; the number of families receiving preventive services after reunification; and other measures.

As many of the metrics measure outputs rather than outcomes, a limitation also identified by the Citizens’ Committee for Children and the Council of Family and Child Caring Agencies, the City Council should work with ACS to expand the required indicators.21 For example, reporting should differentiate between the different service models and case severity so that there is a better understanding of what works best for which populations.

New York City has more than doubled its investment in preventive services from $123 million in fiscal year 2000 to $256 million in fiscal year 2017, and an additional increase of $57 million (22 percent) is projected for fiscal year 2018 to bring total spending to $313 million.22 These investments are meant to improve outcomes for families and prevent foster care and child maltreatment–critically important policy goals. Additional investments in these services should be contingent on a more thorough understanding of whether these services are achieving the desired outcomes. ACS’s performance should be evaluated consistently, using data and metrics, rather than in response to headlines of tragic cases that focus the public’s attention.