Don’t Get Too High on Potential Marijuana Revenues

Recreational marijuana has been legalized for commercial sale and personal consumption in 10 states and Washington, D.C. as of November 2018. Of the states that have legalized recreational marijuana, seven have active commercial markets for sales including a New York State neighbor, Massachusetts. Three more states are finalizing rules and regulations to facilitate sales in the near future including another New York State neighbor, Vermont.

There is growing speculation that Democratic control of the executive and legislative branches coupled with rising public support present the strongest opportunity for recreational marijuana legalization to date. There is potential for new revenue from new and existing taxes that may be imposed on the recreational marijuana industry. Although the new legislature has not yet convened, suggestions already have emerged as to how to spend the hypothetical new revenue, including investing the revenue in mass transit and directing the funding to communities disadvantaged by decades of marijuana law enforcement.1

Advocates, stakeholders, and elected officials must be cautious in these early discussions regarding speculative revenues. Evidence from other states, as well as research conducted by the New York State Department of Health (DOH) and the New York City Comptroller, point toward significant revenue potential from the multibillion dollar marijuana industry. But the evidence and research also reveal that many months or years of careful crafting of legislation, regulation, infrastructure, and market development precede consistent revenues.2 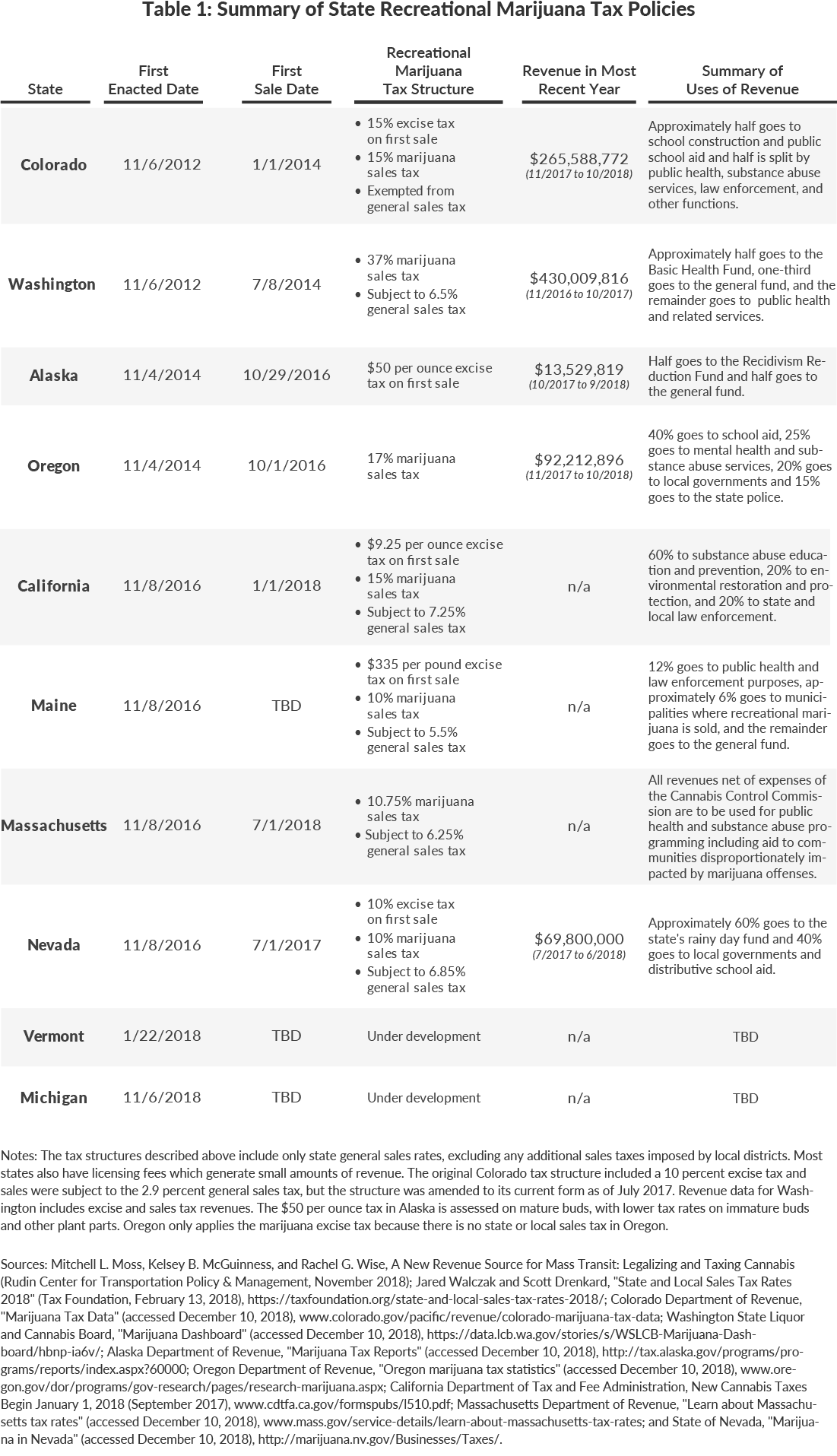 While states’ legal markets are starting to realize significant revenue, they experienced major fiscal and programmatic implementation challenges, with issues plaguing production and consumption, which in turn impacted tax revenues:

While other states have not had such fundamental issues with development of the legal recreational market, their experiences show there is still a long delay in receiving tax revenues. Alaska, Oregon, and Colorado have begun to realize robust receipts from marijuana taxes, but only years after they passed and implemented programs. Colorado, the first state to authorize recreational sales, only started to realize consistent tax receipts about 4.5 years after its referendum passed. (See Figure 1.) 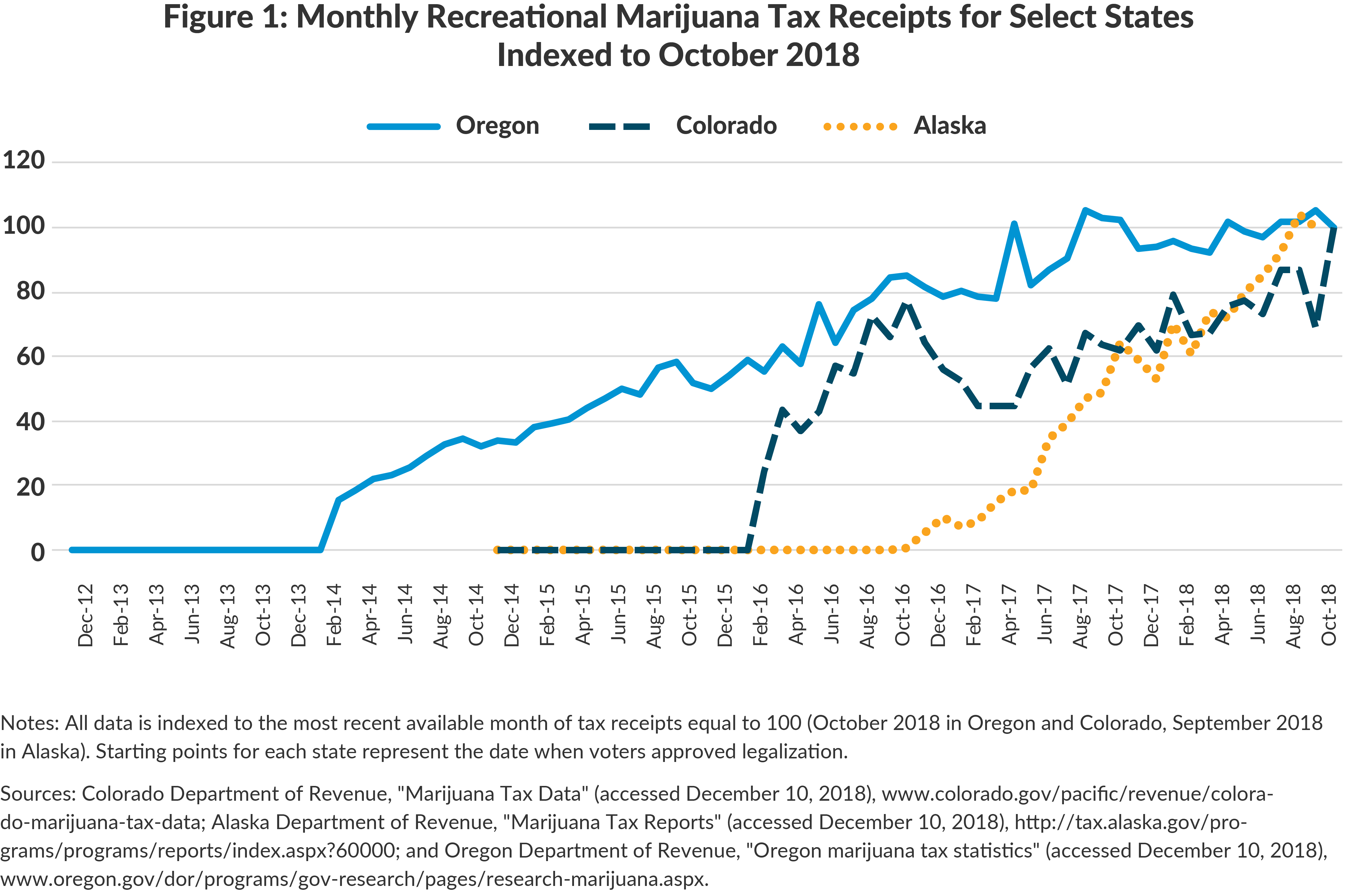 New York can draw on the experiences of other states in crafting the program, but each state, region, and marijuana market is unique.6 DOH released a study on the issue in July 2018, concluding that the public health costs are low, and legalization could generate nearly $700 million in annual tax revenue.7 With popular opinion and legislative control shifting, it is possible that authorizing legislation will be adopted in 2019.8 Stakeholders, interests, and elected officials are already arguing over how to spend the money when it materializes, but there are reasons to be concerned and cautious about potential revenue:

As New York considers moving forward with legalization, use of revenue should follow these general precepts:

Potential tax revenue from recreational marijuana legalization in New York State may be significant: it is likely that excise and sales taxes will generate hundreds of millions of dollars in annual revenue. However, early estimates are speculative at best, based on hypothetical tax structures and wide-ranging assumptions of the consumer market. It will take years to fully realize a robust legal recreational marijuana market and associated tax revenue. If New York does implement such a program, the associated revenue must be cautiously forecast, transparently disbursed, and utilized for general state operating purposes.