An Expensive and Risky Benefit

A unique feature of a tax deferred compensation plan available to New York City teachers guarantees them a 7 percent investment return regardless of what happens to interest rates or stock market values.1 This guarantee costs New York City taxpayers about $1.2 billion annually, and should be replaced with a more reasonable arrangement before the growing costs undermine the viability of the teachers’ regular pension system.

The Unique Nature of the Teachers' Plan

New York City teachers have been served by the New York City Teachers’ Retirement System (TRS) since 1917. This system guarantees teachers who qualify with a minimum time of service and a designated age a cash pension benefit based on a formula involving years of service and average salary in their final years of employment. The benefits are financed through a combination of contributions from the employees, contributions from City taxpayers, and earnings on investment of these contributions managed by the TRS. Such plans are known as Qualified Pension Plans or QPPs.2

Members of QPPs are also eligible to participate in tax deferred compensation plans that allow public and private employees to set aside and invest a portion of their salary with the money not taxed until it is used as retirement income. Since workers’ incomes and tax rates are generally lower in retirement than during peak earnings years, the tax deferral lowers the tax burden and provides added income in later years. Congress has created multiple tax deferred plans for nonprofit, private and public employers as well as individuals, with the types of plans often known by their legislative section names such as 401(k)s, 403(b)s, and 457(b)s.

New York City teachers first became eligible for a supplementary deferred compensation plan in 1970 called the Tax Deferred Annuity or TDA. The arrangement was similar to that available to employees of nonprofit organizations; participation is voluntary and participants have a choice of investment funds managed by independent financial institutions.

Two developments led to the addition of a unique feature to the TDA in 1988. First, in 1986 the City Office of Labor Relations (OLR) began offering city employees a deferred compensation plan with a larger range of investment options than available in the TDA. The TRS board was concerned that the new OLR plan might be more attractive to some teachers than its plan and funds might eventually be withdrawn from the TRS plan. Second, in October 1987 the stock market crashed. The most popular TDA investment choice, the Diversified Equity Plan, lost about a quarter of its value.3

In 1988 the State Legislature added a unique feature to the TDA: a guaranteed fixed return fund investment option. TDA participants could designate some or all of their contributions for the fixed return fund, guaranteed to return 8.25 percent. The guaranteed rate was pegged to average returns in the QPP over previous years and was close to returns on federal government bonds at the time.

The option of a guaranteed rate of return was unique. Other deferred compensation plans including the OLR plan offered fixed rate investment options, but the rate could and did vary. No level of return was guaranteed. The new TDA fixed option offered participants a higher degree of security after the market crash and made the plan more competitive with the OLR plan.4

In order to provide a guaranteed return, the TDA has to have a funding source in case actual returns from the fixed investments fall short. The QPP–and hence city taxpayers—is responsible for the guaranteed return.5

In 2009 the guaranteed rate on the TDA fixed fund option was lowered from 8.25 percent to 7.0 percent for most participants. This State legislative action followed a collective bargaining agreement between the Mayor and the United Federation of Teachers (UFT). Although the agreement applied only to UFT members, these teachers represent the vast majority of the TRS participants.6 In exchange, the number of days UFT members have to work each year was reduced.7

The reduced guaranteed rate has not made the fixed return investment option less attractive. In fact, because of another market crash in 2008 and a subsequent sharp global drop in interest rates, the fixed fund option has become much more popular among TDA plan participants. As shown in Figure 1, from 2007 to 2015 the amount of money in the fixed fund grew from $7.4 billion to $18.7 billion, a shift from 40 to 66 percent of total TDA assets.

Another important consequence of the decline in interest rates is a growing gap between the guaranteed rate of return for the fixed fund and actual market interest rates.  The fixed return option is very similar to a money market fund. Participants have the ability to withdraw or transfer their assets virtually at will.  And the QPP, which invests participants’ funds in its portfolio, would otherwise obtain this funding by borrowing in the short-term market. The London Interbank Offered Rate (LIBOR) is a good proxy both for the yield earned in money market funds and what the market would charge the QPP for short-term funds.

This large gap is a big problem for local taxpayers who bear the cost of the excess payments. Participants are being paid a rate of 7.0 percent (and previously 8.25 percent), when the amount they would earn on equivalent market rate investments is much lower.8 Table 1 shows the excess payments by taxpayers each year from 2007 to 2015. As the fixed return fund assets and gap in rates of return have grown, the taxpayer subsidy has mushroomed from $238 million in fiscal year 2007 to $1.2 billion in fiscal year 2015. In 2015 this taxpayer subsidy was equal to 36 percent of the total taxpayer contribution to the TRS QPP.9 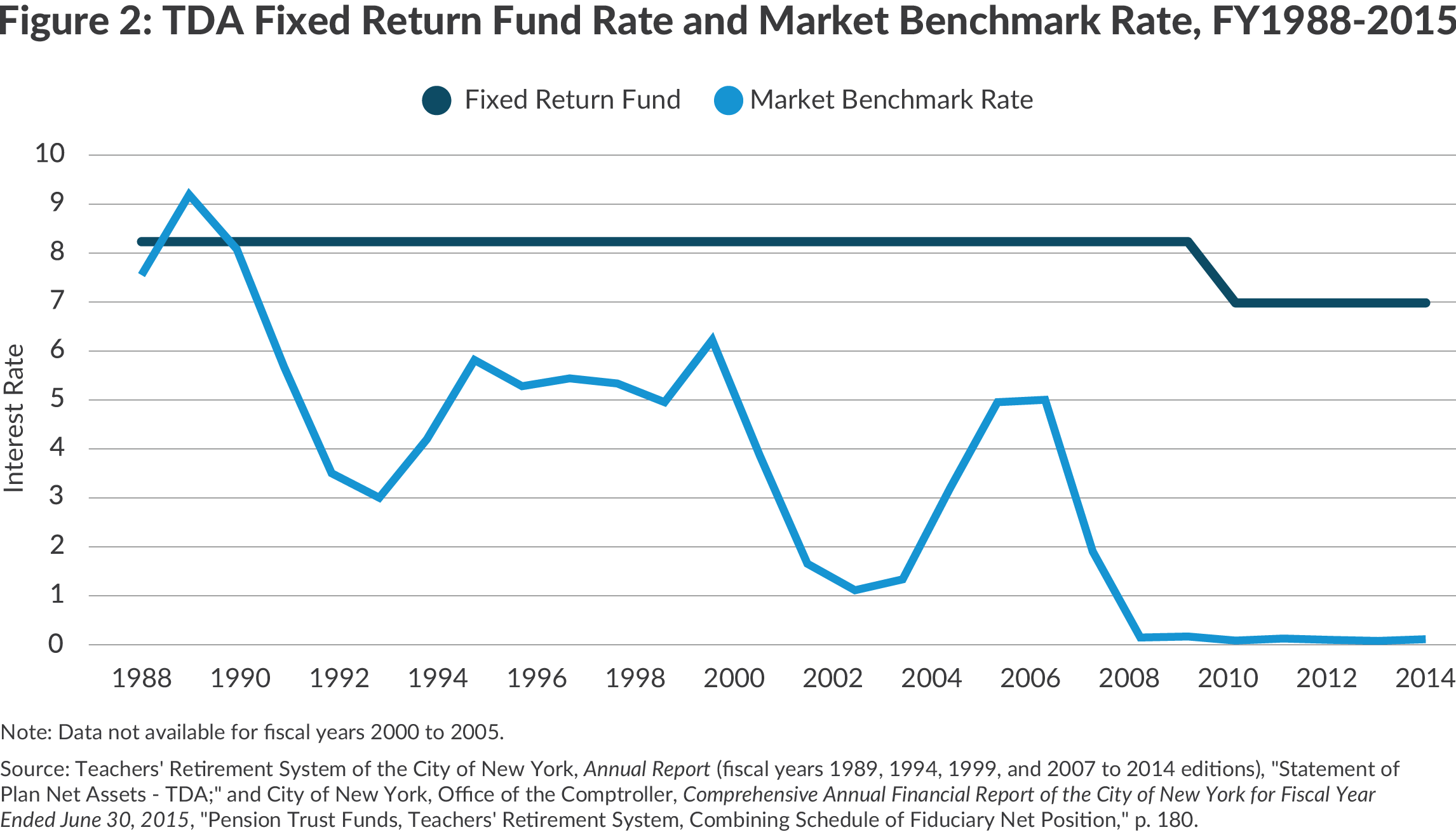 The $1.2 billion in extra interest is distributed in proportion to the assets teachers have accumulated in the fixed fund; those able and willing to contribute a large annual sum, and those with the longest period of contributions, receive the largest benefit. The TDA has approximately 137,000 participants; about 51,000 are retired, but only about 3,000 are currently drawing income from their account.10 The others leave their funds in the account, accruing the 7.0 percent return.

The TDA is not just a big expense; it also is a threat to the viability of the teachers’ QPP. This plan invests the TDA plan fixed return fund money along with its own assets. Investing what is technically borrowed money, known as leveraging, is a dangerous practice. Other pension funds have sometimes done this in an effort to increase their investment earnings. For example, in 2010 the Wisconsin state pension fund obtained authority to leverage up to 20 percent of its assets, and this drew criticism from many as being too speculative.11 The TRS investment of TDA funds represented in 2015 a leveraging of nearly 42 percent— about $18.7 billion TDA fixed return funds added to $44.3 billion in QPP funds result in total investments of $63 billion.12 And the degree of leveraging is likely to continue to grow as the size of the TDA fixed fund assets grow.

The extensive leveraging places QPP assets at risk. If the highly leveraged investments suffered a loss equal to that of the market decline in 2008-2009 (24.3 percent), the QPP would have to make good on a $4.5 billion loss on its investments on behalf of TDA plan participants in addition to its own losses. The total would amount to a 35 percent loss of QPP assets. Losses of this magnitude could jeopardize its ability to sustain pension benefit payments to its retirees. Large tax increases or service cuts to offset leveraged pension fund investment losses should not be a risk imposed on local taxpayers. The current arrangement should be changed before the downside risks materialize and create a crisis.

The unique, and uniquely expensive, arrangement for the teachers’ TDA plan should be reformed.  The TDA is not a pension benefit protected by the State constitution and can be changed with state legislation.

The most direct way to make the change would be to eliminate the TDA and transfer its assets and participants to OLR’s plan. That plan is managed by independent institutions and offers multiple investment choices including relatively secure fixed return funds that vary with bond interest rates and are not subsidized by taxpayers. Teachers would have the same benefit plan as all other municipal employees.

A more gradual change would be to require only newly hired teachers to use the OLR plan, but to reform the TDA plan serving current teachers and retirees. The fixed income option should be converted to choices comparable to those offered in the OLR plan – a government bond fund and a corporate bond fund with returns based on prevailing interest rates.

If the city’s elected leaders and taxpayers want to provide teachers, and other municipal employees, with a more secure investment option for their deferred compensation than is available in the OLR plans, they should consider the approach used by the federal government. The United States Office of Personnel Management operates the Federal Employees Retirement System (FERS), which offers a voluntary deferred compensation plan with three investment options. Two of the options are similar to most other deferred compensation plan options – a common stock fund and a fixed income bond fund; both have no guarantee and returns vary with market conditions. The third FERS option, known as the G Fund, invests in specially issued short-term Treasury securities that pay an interest rate equal to the average market rate of outstanding longer term federal securities. No set rate of return is guaranteed, but federal taxpayers are in effect subsidizing these investments to the degree long-term rates exceed short-term rates on federal securities. In 2015 the difference was 1.5 percent versus 0.25 percent.13 This is a far more limited version of the current excess payments to New York City teachers, and it could be a model for an approach to helping teachers and other municipal employees gain some investment security without creating an excessively expensive and risky burden for local taxpayers.

An Expensive and Risky Benefit