On Sunday March 22 fares for the Metropolitan Transportation Authority’s (MTA) subways and buses will go up. Like three previous biennial fare increases since 2009, this hike is needed to raise revenue for transit operations. However, more money could be gained or the increase could be less painful for riders if the MTA pursues another, arguably fairer, revenue-raising strategy. By capping at a reasonable level the number of rides available to “unlimited” 7-day and 30-day MetroCards introduced in 1998, the MTA could secure about $93 million annually, the equivalent of nearly two-thirds of the expected revenue from this year’s subway and bus fare increase.1

In the last two decades the MTA has changed subway and bus fare policy dramatically. In the 1990s as the MetroCard was introduced, the MTA emphasized increased ridership by offering fare discounts. Since 2000 the MTA has shifted emphasis, seeking to generate more revenue from the fare box in order to help cope with fiscal stress. The result in recent years is regular fare increases for single rides and volume discount cards, but more creative and equitable options should be considered.

The MTA began testing MetroCards in 1993 and phased in new turnstiles and other equipment to replace tokens at all its stations between 1993 and 1997. During this period the $1.25 fare set in 1992 was raised to $1.50 in late 1995. The fare charged for those using MetroCards was the same as those for tokens; volume discounts were not available and only senior citizens and some students were eligible for reduced fares.2 Average revenue per ride was close to the nominal fare, $1.40 versus $1.50 in 1996.

Once MetroCards could be used systemwide, fare policy changed significantly. In July 1997 the MTA began permitting free transfers between subways and buses; until then a full fare was charged for each transfer between the two. At the start of 1998 the MTA introduced volume discounts, providing a 10 percent discount for MetroCard purchases of $15 or more, and in July 1998 unlimited 7-day and 30-day passes debuted at prices of $17 and $63 respectively.3

These initiatives had two dramatic impacts. First, ridership boomed. While an expanding economy in the late 1990s played a role, significantly reduced effective fares were a driving factor in ridership growth. (See Figure) Total subway and bus ridership increased 26 percent between 1996 and 1999; bus ridership jumped 72 percent in this period largely owing to the new free transfer policy. Second, average revenue per ride dropped. The combination of flat nominal fares, free transfers, new volume discounts, and unlimited passes lowered the average revenue per ride from $1.40 in 1996 to $1.09 in 1999. The combined effect of rising ridership and lower effective fares was decreased total fare revenue; in 1996 fare revenue was $2,157 million and in 1999 it was $2,118 million. 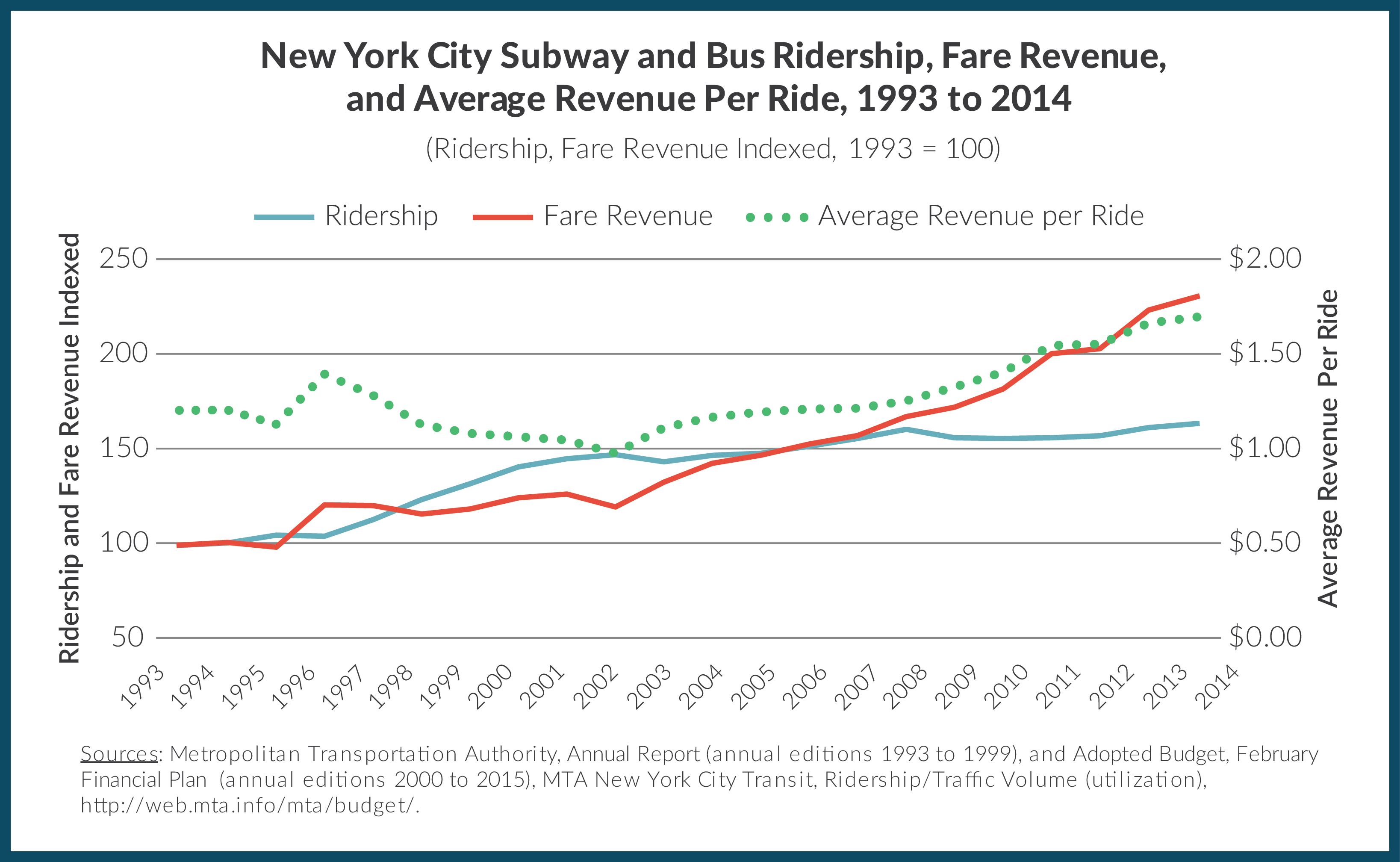 However, higher fares still did not generate enough revenue to meet the MTA’s operating and capital expense needs. An agreement reached with the Governor and State Legislature in 2009 gave the MTA significant new revenue from a new payroll tax in the region and called for regular fare increases beginning in 2011 to yield 7.5 percent fare revenue gains every two years.4

The need for increased fare revenue need not be met exclusively through current practices of raising base fares and adjusting discounted prices. The MTA can generate revenue by capping the number of rides permitted on the 7-day and 30-day passes. Unlike recent fare increases hitting nearly every straphanger, the caps would provide needed revenue while affecting fewer riders, many who now enjoy very deep discounts, and would still retain heavily discounted fares.

But eliminating unlimited passes would be a radical change, causing hardship for many straphangers and undermining the sense of convenient mobility the passes are intended to promote. A fairer strategy is to cap the number of rides on these passes at a number above the break-even point.

More information than is now publicly available about the ways high-volume passholders use the system should guide setting specific caps. Some available evidence indicates the unlimited passholders have higher incomes on average than other MetroCard users.11 Anecdotal evidence suggests abuses among unlimited card purchasers such as selling swipes and sharing passes among family members or employees may account for a meaningful share of the high-volume rides.12 Pending better information, the revenue impact of caps is appropriately estimated only with illustrative examples in order to gauge the general magnitude. Accordingly, the Table shows the revenue impact for illustrative caps set at 22 rides for the 7-day pass and 92 rides for the 30-day pass.

These caps would make unlimited passholders pay for an estimated 3.8 million rides per month that are now “free.” How these people would respond is uncertain and likely would vary between 7-day and 30-day passholders. Reasonable assumptions lead to an estimated average revenue per ride of $2.05.13 This would generate $7.8 million monthly or $93 million annually.

These potential revenue gains should be seen in the context of the MTA’s revenue target for its 2015 fare increase and the revenue needed for its 2015-2019 capital plan. The 2015 subway and bus fare increase is expected to yield an estimated $147 million annualized, and the funding gap for the proposed MTA capital plan is about $15 billion. The revenue from the illustrative caps on unlimited passes would provide 63 percent of the revenue from the latest fare increase. This could be used to lessen the increase in MetroCard prices or to support $1.5 billion in borrowing for the capital plan.14 Unlike general fare increases affecting nearly every straphanger, the caps would provide financial benefits while affecting only the relatively few riders who use their 7-day and 30-day passes most heavily and would still benefit from discounted fares. 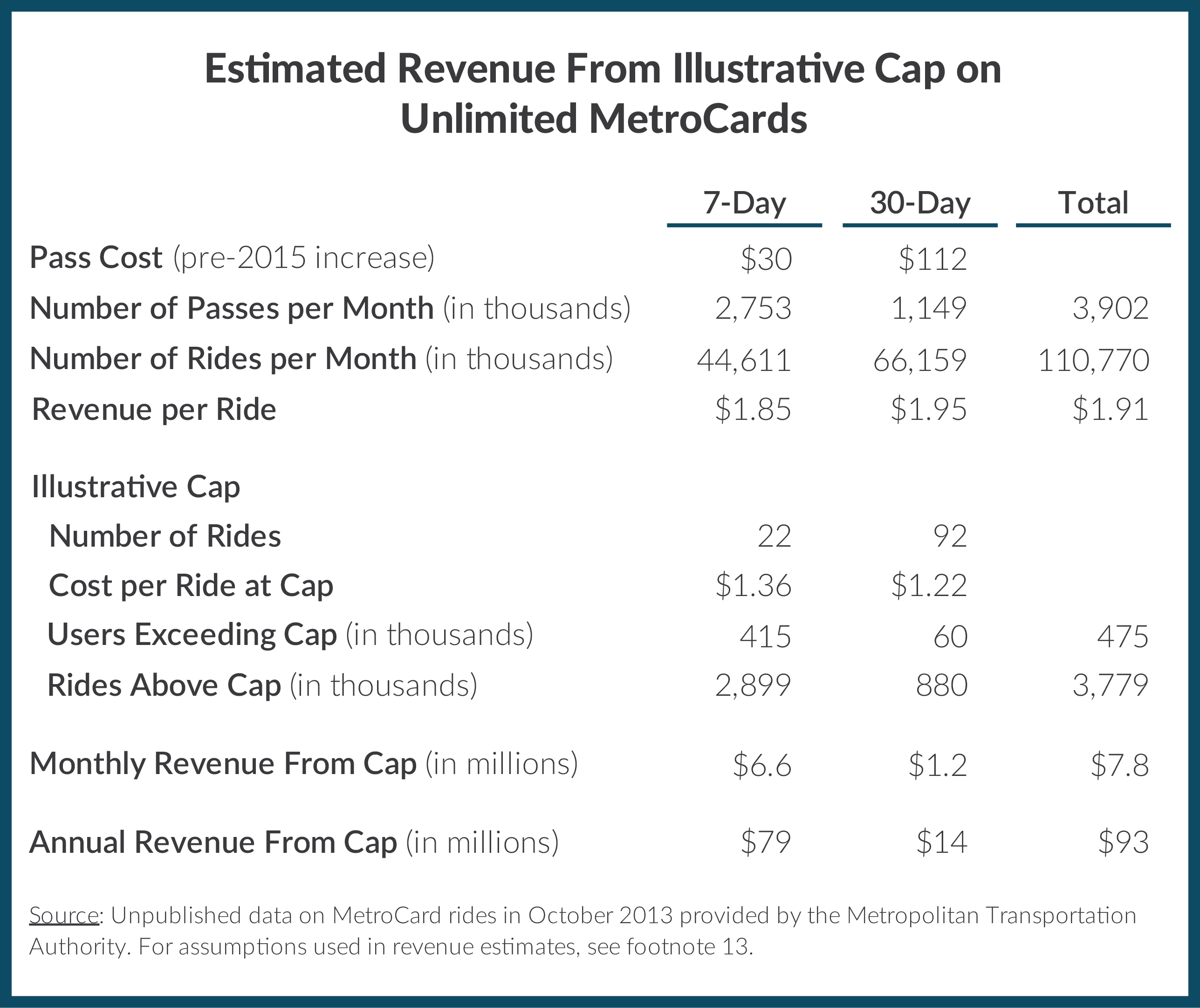 By Charles Brecher and Jamison Dague