The New York State Adopted Fiscal Year 2020 Budget directs three revenue sources—the new New York City central business district (CBD) congestion tolling fee, the new real estate transfer tax on sales greater than $2 million in New York City, and a share of State and City sales tax revenues—to support the Metropolitan Transportation Authority (MTA). The revenues will go to the “CBD Tolling Capital Lockbox” to support the MTA’s 2020-2024 Capital Plan (as well as subsequent capital plans). This blog clarifies what the revenue streams are and how they will flow to the lockbox.

The largest revenue stream will come from the new congestion pricing program that tolls vehicles entering Manhattan at 60th Street or south of it.1 The law provided a governance structure and some specifics on the contours of the program, but many of the details are subject to administrative decision-making.

How the Program Will Work

CBD tolls will be implemented no sooner than January 1, 2021. The Triborough Bridge and Tunnel Authority (TBTA), the MTA affiliate agency that manages nine MTA bridges and tunnels in New York City, will implement and operate the tolling program in cooperation with the New York City Department of Transportation (DOT).  A Memorandum of Understanding between TBTA and DOT is to be reached within 60 days of the State budget’s adoption.

Toll rates are not set in statute and will be determined by the TBTA board based on the recommendation of a six-member Traffic Mobility Review Board (TMRB).2 (Previous analyses have recommended a peak rate of $11.52.)3  The New York City Mayor can recommend one TMRB member to the TBTA, but the TBTA will appoint all six members. One of the six must reside in the region served by Metro-North Railroad and one in the region served by the Long Island Rail Road.

The Adopted Budget set the following parameters for the TMRB:

Additionally, the State will offer a refundable personal income tax credit for congestion pricing tolls paid by residents of the zone with income below $60,000.

The tolling program is expected to generate roughly $1 billion annually to support $15 billion in capital investment, as well as TBTA’s cost of implementing and operating the program. The State is loaning $100 million to TBTA to cover initial implementation costs. Revenues exceeding the annual operating cost will be deposited into the CBD Tolling Capital Lockbox, discussed in detail below. The revenue will not be not subject to appropriation by the Legislature and will not appear in the State budget.

How the Tax Will Work

Second, a new “mansion tax” was added to the State RETT for New York City sales. Currently, all New York State buyers of residential property of $1 million or more pay an additional 1 percent of the sales price. In New York City the new progressive mansion tax will be levied starting at 0.25 percent for residential sales between $2 million to $3 million, increasing to 2.9 percent for sales of $25 million or more. Generally, the buyer pays the mansion tax.

Taken together, total State and City transfer taxes will range from 1.4 percent to almost 6 percent for properties selling for more than $25 million. The new taxes will take effect on July 1, 2019.6 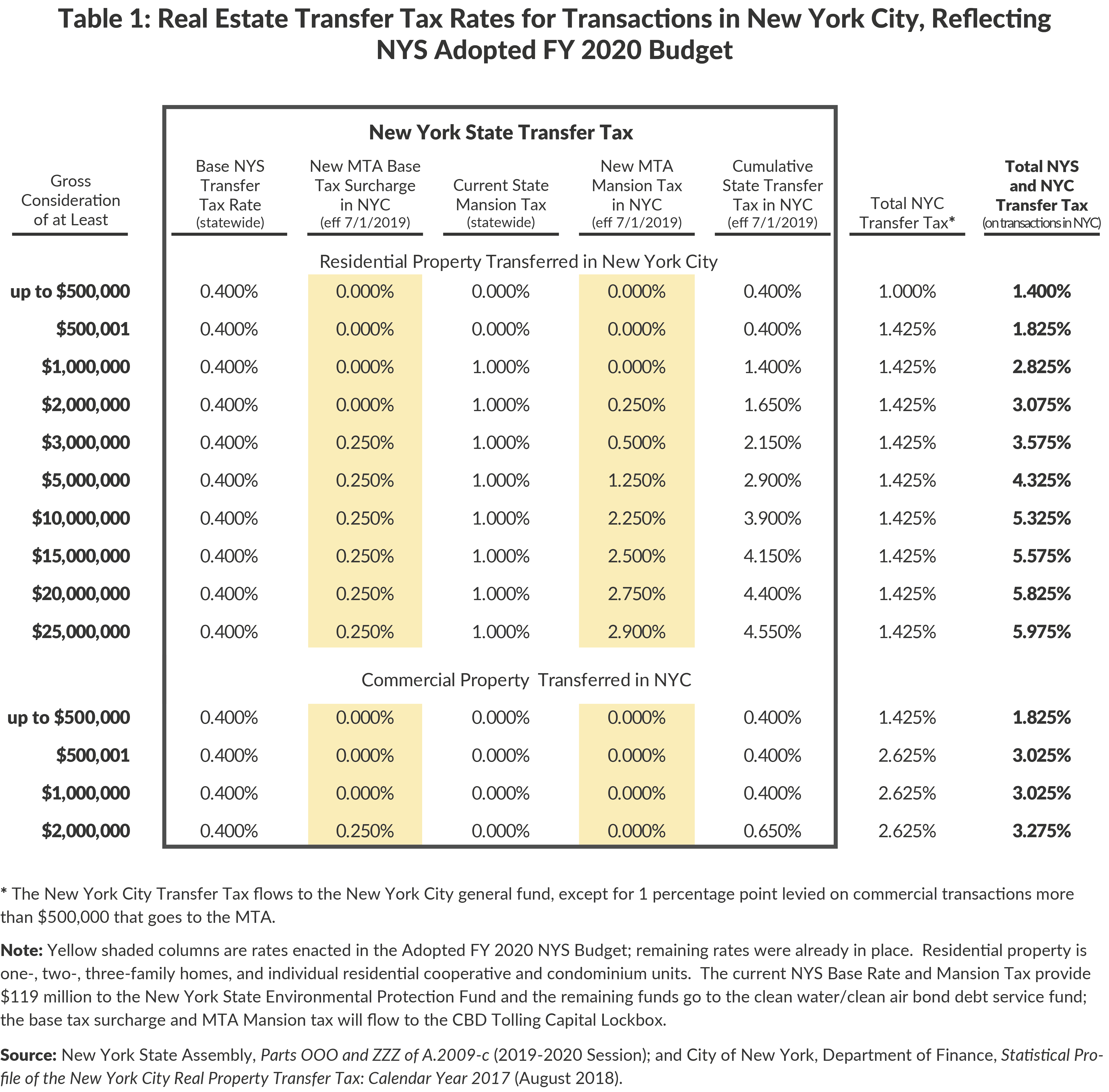 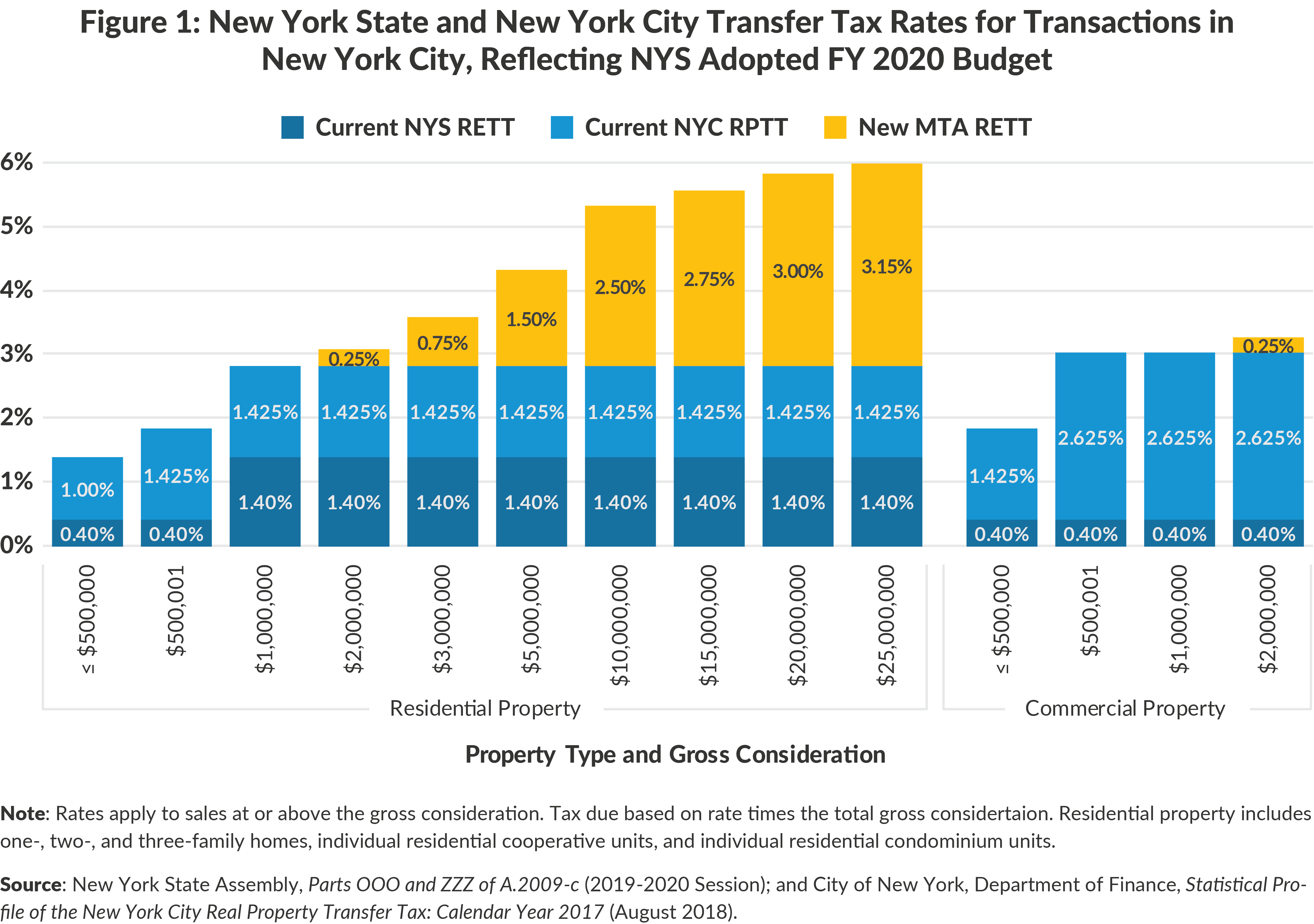 The New York State Division of the Budget estimates that the two newly enacted RETT surcharges will generate $365 million per year and are expected to support approximately $5 billion in MTA capital needs. In contrast to the CBD tolling program that is designed to achieve a target yield, these revenues are estimates based on the enacted policy; however, they are likely to be volatile as are the existing State and City real estate transfer taxes. The funds from these taxes will be deposited by the New York State Comptroller directly into the CBD Tolling Capital Lockbox.  They will not be subject to appropriation by the Legislature and will not appear in the State budget.

How the Intercept Will Work

The last component of new MTA capital funding comes from allocating a portion of State and City sales tax revenue.7 While the enacted State budget required Internet marketplace sellers to collect sales tax on online purchases, the sales tax support of the MTA is not tied directly to that additional revenue.

The State Comptroller is directed to “intercept” State sales tax revenue and to deposit it into a newly created Central Business District Trust Fund, which subsequently would be appropriated by the Legislature to the CBD Tolling Capital Lockbox. Statute specifies the deposit will be $112.5 million in State fiscal year 2020, $150 million in State fiscal year 2021, and will increase 1 percent annually thereafter.

Once the congestion tolling program is operational, revenues from all new resources are estimated to yield at least $1.685 billion annually, which is expected to support roughly $25 billion of the MTA’s 2020-2024 Capital Plan. (See Figure 2). 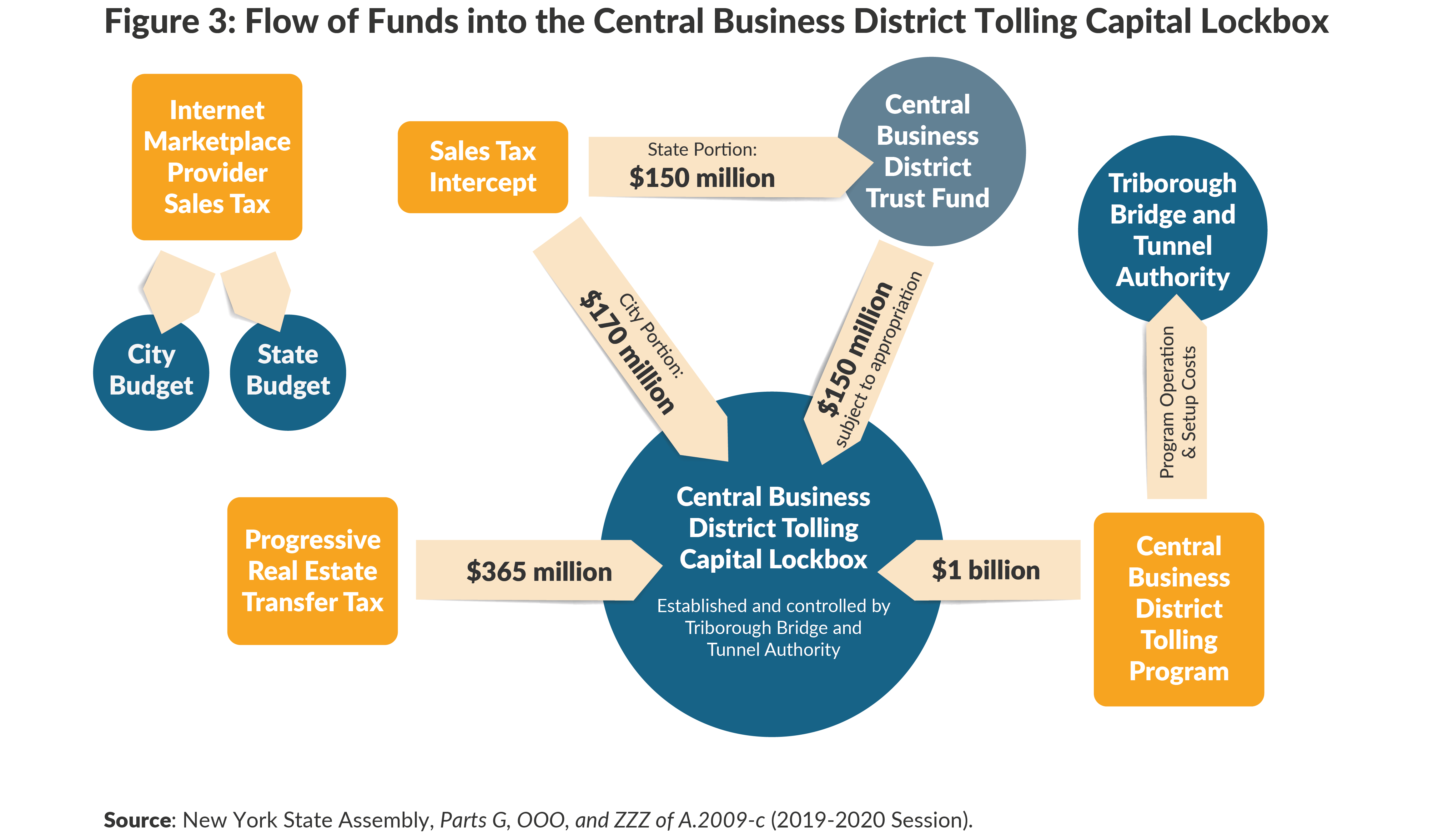 The new revenues are expected to provide $25 billion in financing for MTA capital projects; they will take different paths, but will all be deposited in the Lockbox. The new taxes will begin in state fiscal year 2020 and congestion pricing will be implemented no sooner than state fiscal year 2021.  The MTA’s next capital plan begins in calendar year 2020.