In its recent mid-year budget modification the de Blasio administration credited a coalition of municipal employee unions with achieving $1.3 billion in savings in the City’s employee and retiree health insurance costs. But the unions have not yet agreed to any changes in the plan, and the City and the unions have not yet taken any actions to reduce costs. How can this be?

The questionable savings have their origins in the much hailed contract agreements with several municipal employee unions reached during the Mayor’s first year in office. The series of settlements began in May with an agreement with the United Federation of Teachers (UFT) that went back to 2009 and extended to 2018. It was followed by an agreement with District Council 37 covering many civilian employees for the period 2011 to 2017. Most recently an agreement was reached with unions representing supervising uniformed officers in the police and fire departments extending to 2019. While bargaining continues with rank and file police officers and firefighters, the contracts signed so far have been rightly praised for following a pattern of modest wage increases from 2011 to 2018 and eliminating much of the fiscal uncertainty around the unsettled contracts, including a long retroactive period.

Uncertainty over the nature of the qualifying savings arose with the initial announcement of the MLC agreement, in a letter dated May 5, 2014 signed by Labor Relations Commissioner Robert Linn and MLC Chair Harry Nespoli. The letter identifies types of initiatives “the MLC and the City could consider in their joint efforts,” but has no specific measures to achieve the savings. The letter also stipulates a joint committee will be formed to select an independent actuary to develop a system for calculating the savings from any initiatives undertaken, and Commissioner Linn subsequently indicated quarterly reports on the measures taken and amount of savings achieved would be made public.[1]  Commissioner Linn has appointed a Deputy Commissioner to manage the process; the City and the MLC have each hired an actuary, and a six-month progress report has been prepared but not yet released at time of this writing.

The argument against crediting the MLC agreement with these savings is that qualifying savings should be related to identifiable initiatives launched by the joint effort, not simply a function of deviations from Financial Plan projections. As the Citizens Budget Commission noted in a statement shortly after the MLC agreement was made public: “the suggestion that savings will be calculated relative to City Financial Plan projections rather than actual results of specific initiatives further divorces any savings claimed from changes to the benefit structure of the health insurance program. This basis of calculation makes it possible to attribute savings derived from shifts in national or regional trends in overall health care inflation, which have been projected at high levels in the Financial Plan, to the MLC agreement even if there is no causal connection.”[3]   This misleading calculation, anticipated by CBC in June 2014, is now being adopted by the City.

The Financial Plan projections are based on cautious assumptions by the City’s Office of Management and Budget (OMB) and do not reflect the contemporary dynamics of the health insurance market. The OMB prefers to err on the side of caution in order to protect taxpayers from damaging results; it is better to have spending fall below projections and revenues rise above projections than the opposite. Accordingly, the Financial Plan projected health insurance spending to increase at an annual rate of 9 percent; this is consistent with experience over the previous decade or more, but not indicative of the most recent trends.

Health insurance premium increases for employment-based plans have slowed in recent years and can be expected to be below 9 percent in the short run. A national survey of employers by the Kaiser Family Foundation indicates the family plan rate increase slowed from 9.5 percent in 2011 to 4.5 percent in 2012, to 3.8 percent in 2013, and to 3.0 percent in 2014.[4] A federal government survey of health expenditures indicates the premium increases for large employers in the New York metropolitan area slowed from 12.5 percent in 2011 to 7.3 percent in 2012 and to 3.1 percent in 2013 (the 2014 survey is not yet available).[5]  This broader trend strongly suggests the slowed rate increase for the City’s plan is rooted in more generic features of the current health care industry such as pressure from federal reforms and regional competition among consortiums of providers rather than the City’s undefined initiatives with the MLC. Perhaps most revealing is that the insurance company which offers the plan on which the City’s spending is based (Health Insurance Plan of New York or HIP) also offers its plan to federal employees in New York, and the premium for the federal workers was reduced 6.6 percent in 2014.[6]  Although this reduction is offset by a planned increase for 2015, the premium is basically flat over the 2013 to 2015 period for federal workers while increasing for municipal workers – hardly evidence that something distinctive is being done in the municipal plan.

The danger of using the Financial Plan projections as a basis for calculating savings extends beyond the $1.3 billion taken this year. If similar calculations are used for future rate increases, and if those calculations fall below the 9 percent assumption by a similar magnitude, “savings” of a similar scale (about $400 million recurring in each year) will be credited in fiscal years 2017 and 2018. The cumulative impact of these savings would be another $1.2 billion (about $400 million in fiscal year 2017 and $800 million in fiscal year 2018). Thus the savings unjustifiably attributable to the MLC agreement could equal $2.5 billion of the $3.4 cumulative target and $1.2 billion of the $1.3 billion 2018 annual target. (See Figure 1.) If insurance premiums decline due to economic trends, and not because of any affirmative actions to improve the delivery of health care by the City and the MLC, those savings should be used to offset the expenses of city services, as they always have been, and not to fund raises. 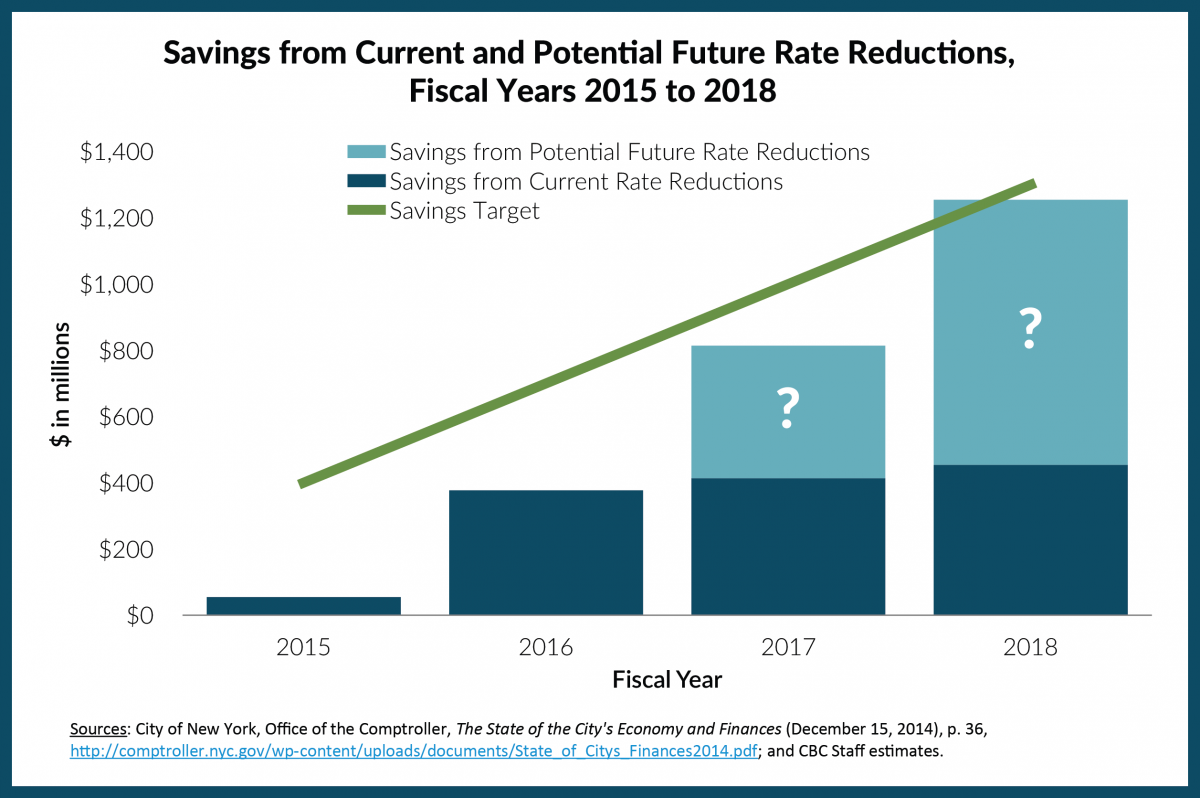 The potential fiscal risk from the apocryphal savings is compounded by a related provision in the agreement with the MLC. It provides that if savings exceed the target amounts, the first $365 million in additional savings will be paid to union members as a pensionable bonus and one-half the savings above that amount will be shared with union members. Consequently, the impact of the mythical savings may be that modest additional savings of a more genuine nature are used to give workers bonuses, while taxpayers lose the benefit of the slower rate increases that would have occurred without any MLC effort.

Six months into a four-year process, misleading calculations of health insurance expenditure savings are being adopted and may undermine the potential long-term gains that could be achieved through an important provision of the collective bargaining agreements with municipal employees. The City and the MLC are pursuing more meaningful ways to modernize the City’s health care plan and make it more efficient; when agreed upon, these concrete, positive measures should be the basis for giving credit where it is due.

[2]  City of New York, Office of the Comptroller, Bureau of Fiscal and Budget Studies, The State of the City’s Economy and Finances, December 15, 2014, p. 36, http://comptroller.nyc.gov/wp-content/uploads/documents/State_of_Citys_Finances2014.pdf. The $55 million savings in fiscal year 2014 is attributed to a lower premium than budgeted for retiree premiums.