Heading the Wrong Way on the Thruway

Governor Andrew Cuomo wants to provide nearly $2.3 billion of State funds from bank settlements to subsidize the New York State Thruway Authority. This would reverse a long-standing practice of funding the Authority from Thruway toll revenue and would put New York taxpayers on a course for financing road and bridge infrastructure that makes little economic or fiscal sense. The Governor and the Legislature should make a U-turn in policy and return to a sounder approach to funding the Authority.

The $2.3 billion proposed subsidy has three components. The fiscal year 2015-2016 budget appropriated $4.6 billion from bank settlements to a variety of purposes, including nearly $1.3 billion to the Authority for its capital program including but not limited to construction of the New NY Bridge (the Tappan Zee Bridge replacement).1 Nearly two-thirds of these funds have not yet been expended. The Governor’s Executive Budget for fiscal year 2016-2017 proposes another $1.0 billon to support the Authority from the $2.3 billion in bank settlements appropriated this year. Of that sum, $700 million is another capital appropriation with few limits on its uses.2 The remaining $340 million will flow to regular users of the Thruway through a three-year program of tax credits for 50 percent to 100 percent of Thruway tolls paid in these years.3

The case against these large subsidies for the Thruway Authority stands on three grounds:

The Argument in Principle

Services provided by government that directly benefit those who receive the services can also have positive or negative impacts on others.  To the extent individuals receive a personal benefit, the service can be efficiently funded with user charges equal to the cost of the service. Drivers who use roads and bridges receive significant benefits from their availability, but others are also impacted. The positive consequences include more efficient labor markets and goods delivery made possible by road transportation; the negative consequences are air pollution and greenhouse gases associated with cars and trucks. General subsidies should be avoided because they would underwrite and promote the negative consequences. The Citizens Budget Commission supports this strategy for financing transportation services and infrastructure in New York.4

Using the State’s bank settlements to subsidize the Thruway Authority deviates from these principles.5 It encourages greater motor vehicle use by permitting tolls lower than actual costs and underwrites the pollution and other negative consequences of greater use. Particularly perverse is the plan for tax credits for higher volume users; those creating the largest negative consequences would pay the least.

A History of Self-support with Tolls

It was articulated at its founding that the Thruway Authority should be self-sustaining.6 Initial State appropriations to begin construction were repaid from bonds eventually issued by the Authority, and bonds funding construction costs were scheduled to retire by 1996. Until the late 1980s the Thruway largely operated as a self-supporting public enterprise relying on tolls to cover its debt service and operating costs.

In 1989 the State created an advisory council to make recommendations concerning financing and operation of the Thruway after 1996. The council’s final report in 1991 recommended the continuation of tolls, reaffirmed the self-funding nature of the system, and indicated the tolls might exceed amounts needed for self-funding. The council recommended the Authority use revenues in excess of needs for transportation investments related to the Thruway corridor, but cautioned against the temptation to turn the tolled road into a State cash machine.7

The State did not closely adhere to the council’s advice, saddling the Authority with the cost of operating and maintaining toll-free portions of I-287 through Westchester County and I-84 through New York between Pennsylvania and Connecticut in 1991 at a combined annual cost of $18 million.8 Following a constitutional amendment, the State also transferred the canal system to the Thruway in 1992. At that time the canals cost the authority $25 million to operate, and from 1993 to 2015 the Thruway spent $1.4 billion for canal operations and capital.9 Other economic development projects including revamping Syracuse’s inner harbor and projects in Erie and Niagara counties have cost the Thruway an additional $31 million.10 Initially, existing Thruway tolls covered losses generated from these assets, but from 2004 to 2012 five toll increases were required to keep the Authority out of the red.11

Despite the recent increases, Thruway tolls are low historically and comparatively. And the tolls need not rise excessively to finance the New NY Bridge and sustain operations.

Thruway tolls are also low relative to other U.S. toll roads. (See Table 1.) The Thruway’s average cost of 5 cents per mile for passenger vehicles is lower than or equal to at least 13 other toll roads. 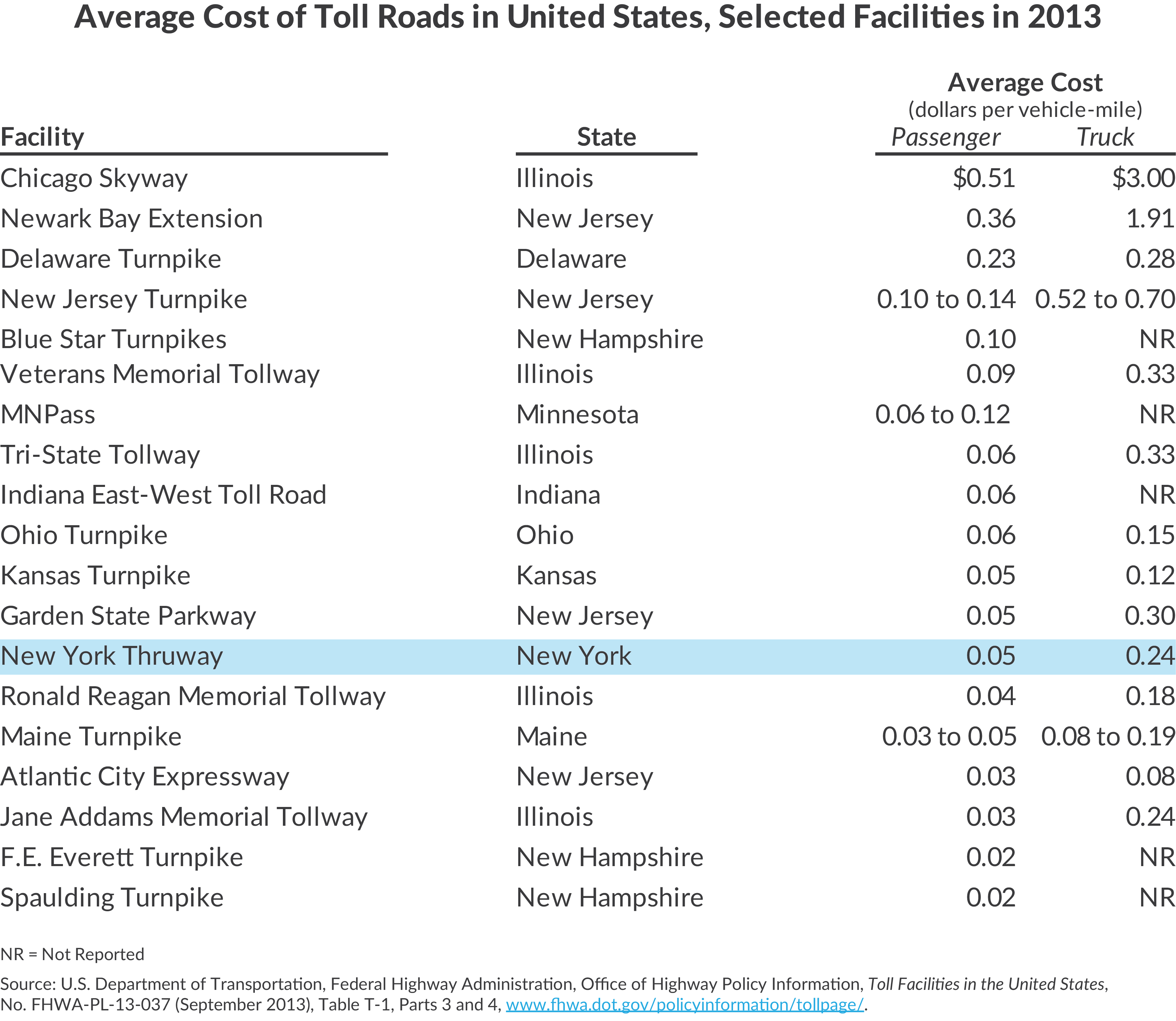 Put another way, the Thruway earned an average of 8.3 cents of toll revenue per mile for all traffic in 2015, a lower rate than the Pennsylvania Turnpike (16.4 cents), Ohio Turnpike (9.2 cents), and West Virginia Turnpike (8.5 cents).13

Raising tolls to finance the remaining, unfunded construction of the New NY Bridge and other improvements is not impractical. If tolls financed construction of the replacement bridge, an increase between $7.29 and $7.43 would be necessary to cover incremental debt service.14 This future increase would peg the cash toll between $12.29 and $12.43 or 82 percent of the current cash toll for the George Washington Bridge 25 miles downriver.

Prospects for restraining the need for future toll increases exist. Removing the Canal Corporation from the Thruway would save an estimated $50 million annually in operating losses and alleviate an additional $209 million in planned capital spending.15 The Executive Budget proposes removing this burden from the Thruway Authority, and the Legislature should concur. The State can also continue to pay for the policing of the Thruway. The Executive Budget would require the Thruway Authority to pay this annual cost, approximately $35 million; the Legislature should reject that proposal.16

New York’s transportation system—including the Thruway—should be maintained and enhanced to accommodate and promote future economic growth. A wider discussion of the mix of user charges—whether tolls, fuel taxes, vehicle registrations, or mileage-based fees—and transit subsidies is appropriate and necessary for longer-term planning of the multimodal system. But, in this budget cycle, decisions should not be made that undermine long-term practices in the use of toll revenues. It is impractical to claw back the $1.3 billion in settlements previously appropriated to the Thruway; however, allocating additional settlement funds in the 2016-2017 budget would move the State—and the Thruway—further in the wrong direction.

By Jamison Dague and Charles Brecher

[5] More appropriate uses of these one-time monetary settlements include reducing the State’s long-term debt or other long-term liabilities, increasing the State’s pay-as-you-go capital contributions for non-highway infrastructure, and saving additional funds in a rainy day reserve. See: Carol Kellermann, “What NY Should Do With $4B,” Crain’s New York Business (July 24, 2014), www.cbcny.org/sites/default/files/OPED_07242014.pdf.

[6] Governor Thomas Dewey wrote in a 1950 message to the Legislature that the authority “will not cost the state one red cent.” See: Michael Hill, “’Self-supporting’ NY Thruway could get billions in subsidies,” Associated Press (March 20, 2016), www.newsday.com/news/region-state/self-supporting-ny-thruway-could-get-billions-in-subsidies-1.11597266.

[14] This calculation assumes a $3.98 billion project cost financed with $750 million in pay-as-you-go capital funding from the Thruway Stabilization Fund, appropriated in State Fiscal Year 2016 and committed from 2015 to 2016 by the Thruway; $1.6 billion in a federal Transportation Infrastructure Finance and Innovation Act (TIFIA) direct loan with an interest rate of 3.89 percent; and $1.63 billion in general revenue bonds with interest rates between 4.9 percent and 5.2 percent. Both borrowings have 30-year terms. Total debt service costs of $196 million annually (low) and $200 million (high) are each divided by the estimated 2019 southbound vehicle traffic of 26.9 million. See: New York State Thruway Authority, 2016 Budget (December 2015), pp. 43 and 55, www.thruway.ny.gov/about/financial/budgetbooks/books/2016-budget.pdf, and “General Revenue Junior Indebtedness Obligations” (updated 2015), www.thruway.ny.gov/about/financial/bond/grb-jio.html.