The Rent's Too Damn High! But the Metrocard is a Pretty Good Deal

How much more would you pay for an apartment just a short walk from your job than for an equivalent apartment that required an hour-long commute by car to work?

In recognition of these important points, the U.S. Department of Housing and Urban Development (HUD) has developed a Location Affordability Index (LAI) that measures an area’s affordability based on housing and transportation costs relative to income.1 This policy brief uses the HUD data to compare costs for a typical household in New York City to those in 21 other cities chosen because they are among the 15 largest by population or the central cities of the 15 largest metropolitan areas by population.

The data indicate that for a typical household:

Overview of the Location Affordability Index

This policy brief uses data for what HUD defines as the “typical regional household.”2 This household is a statistical creation based on average values for selected characteristics – median income, household size, number of workers in the household, and commuting patterns for the workers – of households in the area. For example, a typical household in New York City has 2.69 people, 1.2 commuters, and annual income of $63,915. New York ranks sixth by regional income among the selected peer cities. (See Figure 1). 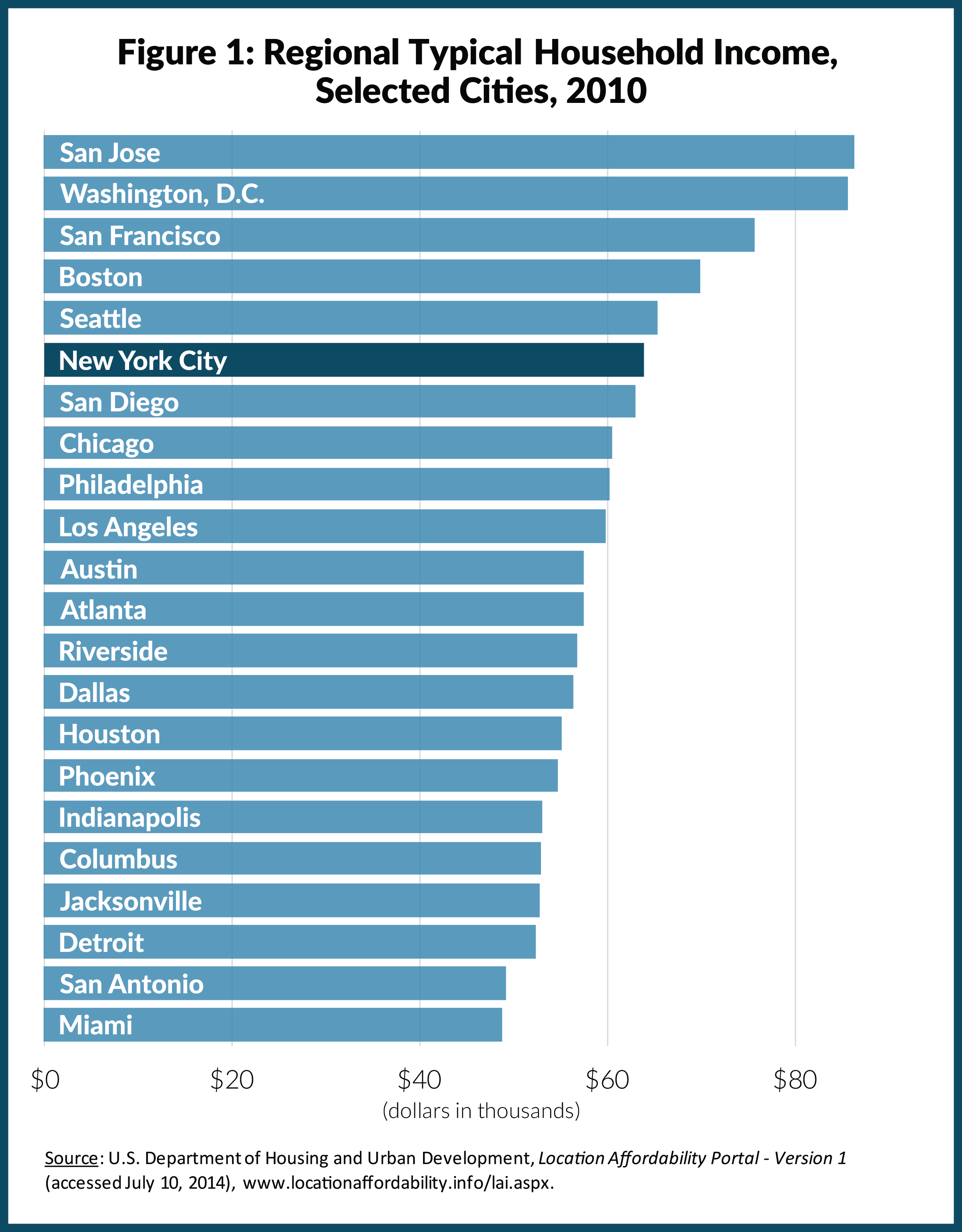 In addition to household income, the other two elements of the LAI are housing and transportation costs. In each case HUD estimates these costs for the typical household using modeling techniques based on census data for households with similar characteristics. A typical household renting in New York City is estimated to have $14,700 in annual housing costs, ranking seventh highest behind San Jose, San Francisco, San Diego, Washington, D.C., Boston, and Los Angeles. (See Figure 2.) This is consistent with past analysis; New York City rents are high, but not the highest, among large U.S. cities.3 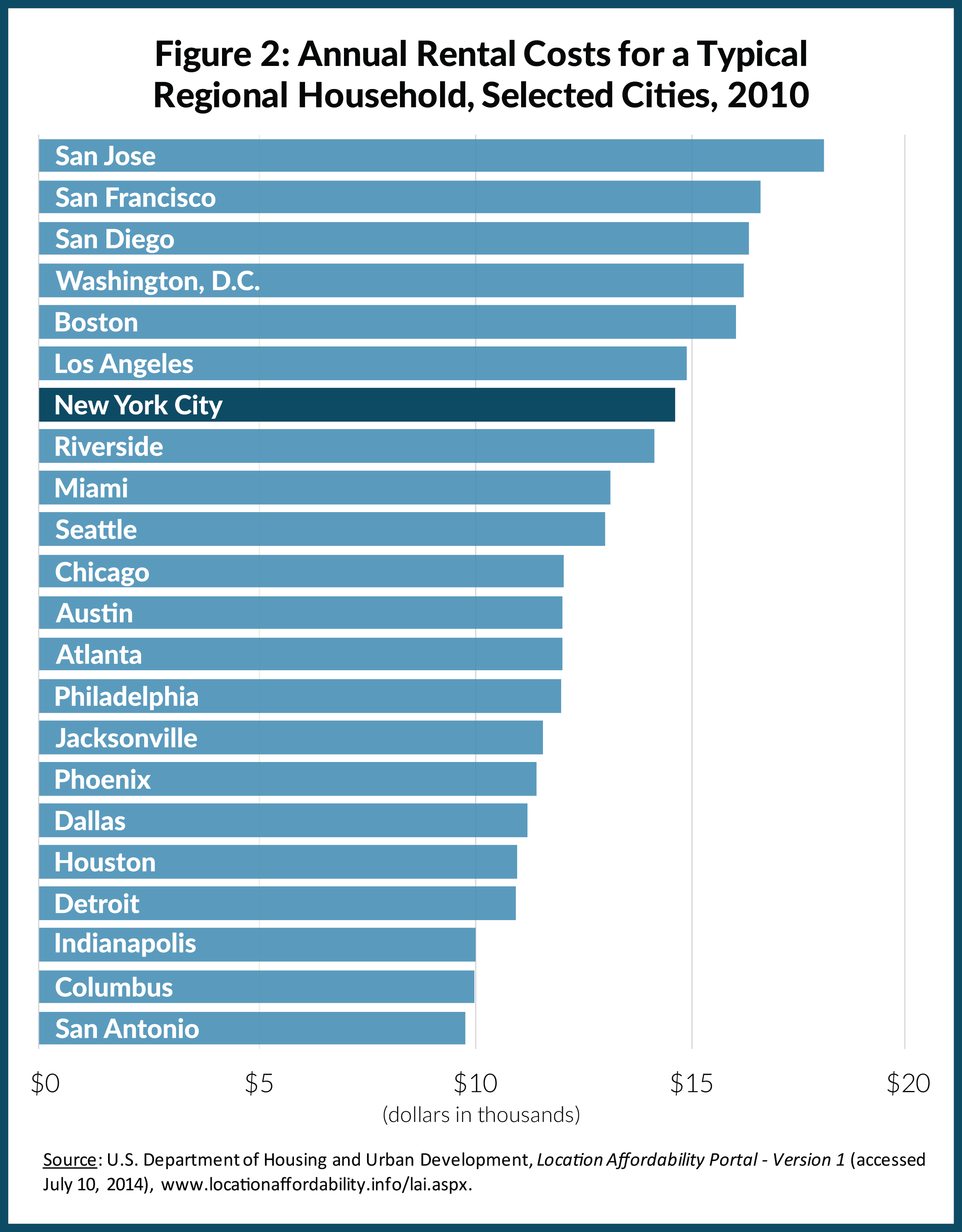 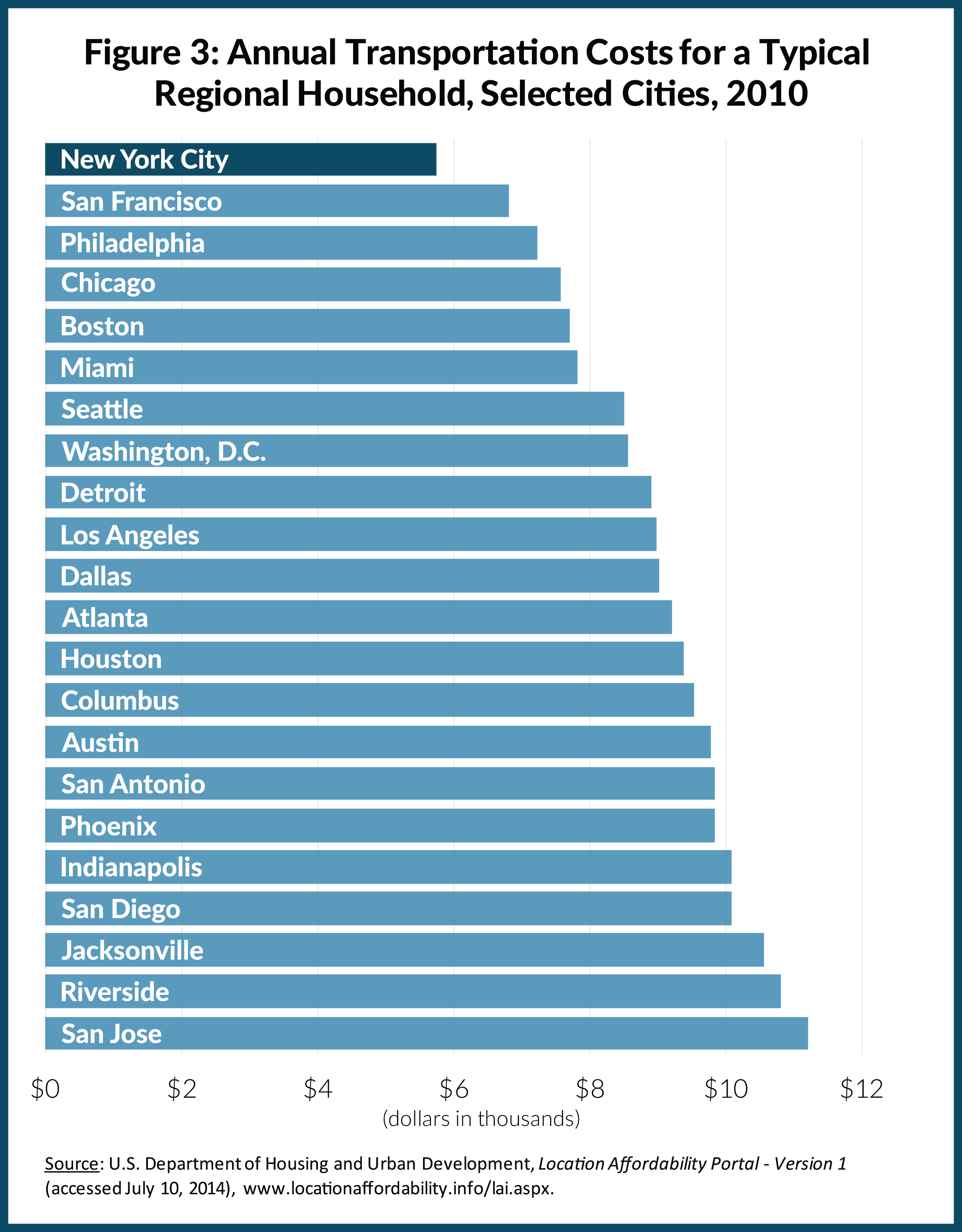 Transportation costs were $11,217 for a typical household in San Jose, the most expensive city for transportation, nearly twice the cost in New York City.

New York City’s low transportation costs are driven by low household vehicle ownership and high public transit use by commuters. New York City is the only city where a majority of citizens do not own a car (56.5 percent) and a majority of commuters use public transit to get to work (55.9 percent). (See Figure 4.) The extensive bus and subway services provided by the Metropolitan Transportation Authority are an equalizing force for New York’s location affordability that offsets its high rental costs.4 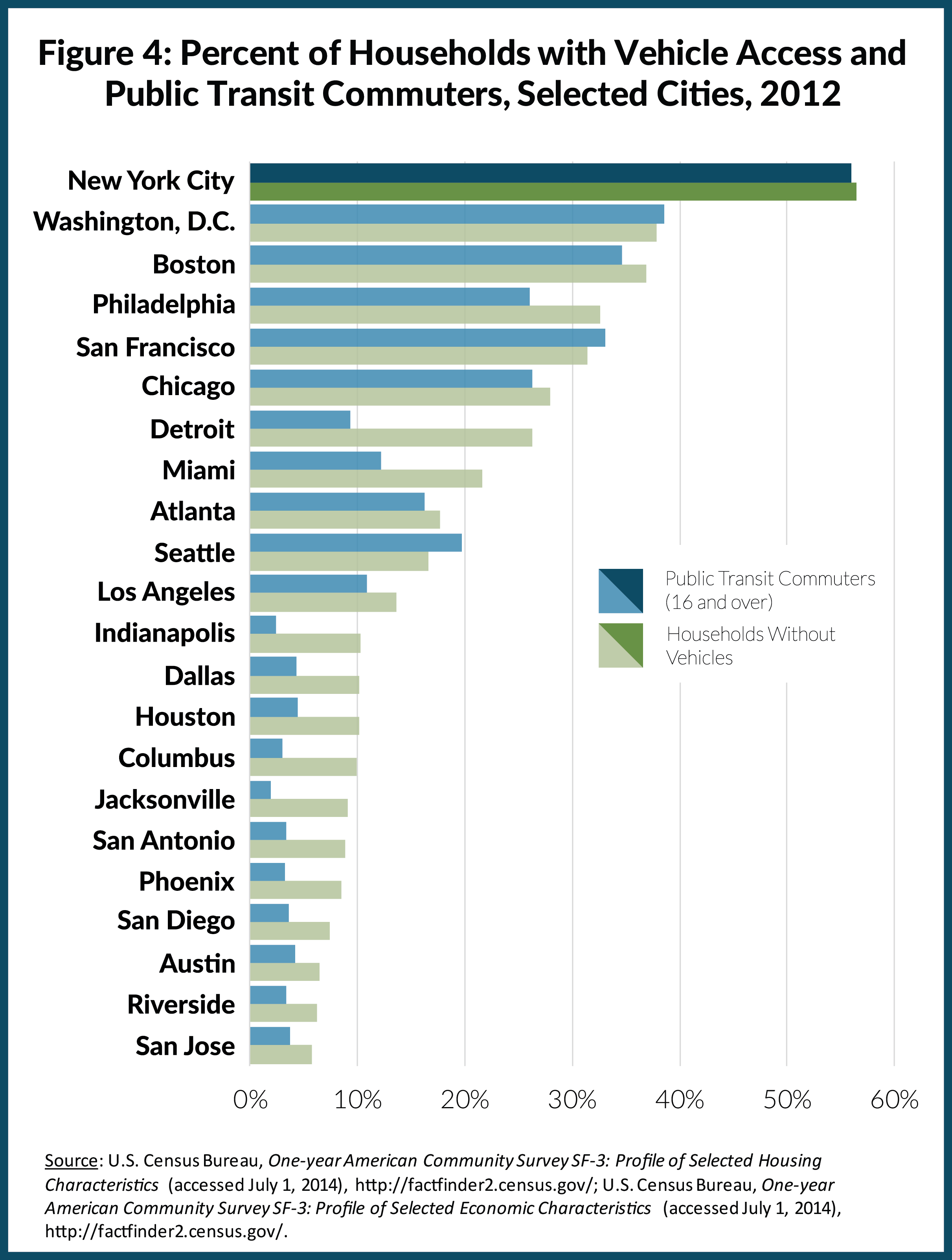 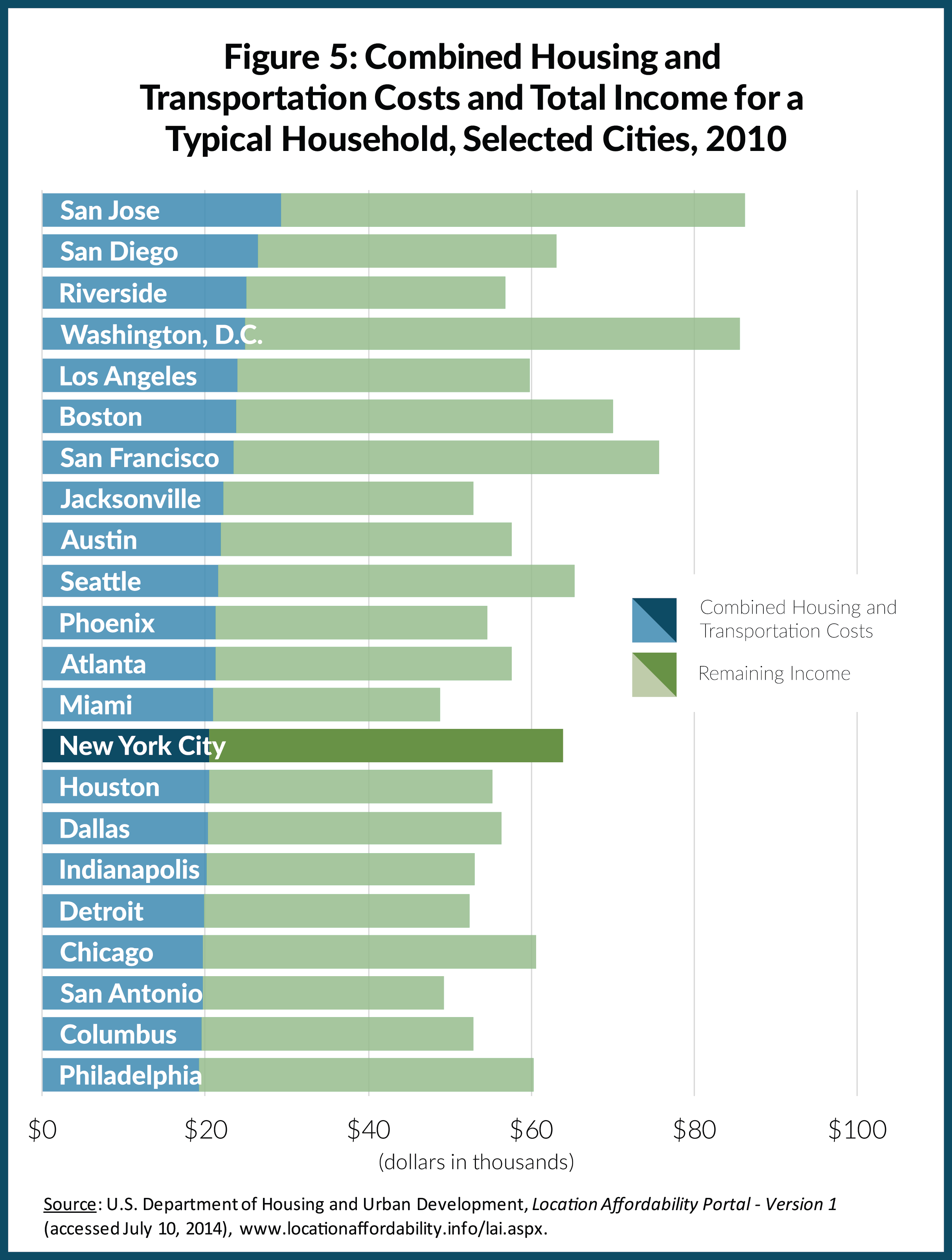 The relatively low transportation costs combine with relatively high incomes to boost New York City’s overall location affordability. New York is the third most affordable city for a typical household, behind Washington, D.C. and San Francisco (See Figure 6.) The location cost burden in New York City is 32 percent for the typical household, well
below the 45 percent threshold for combined housing (30 percent) and transportation (15 percent) suggested by HUD as a criterion for affordable housing. 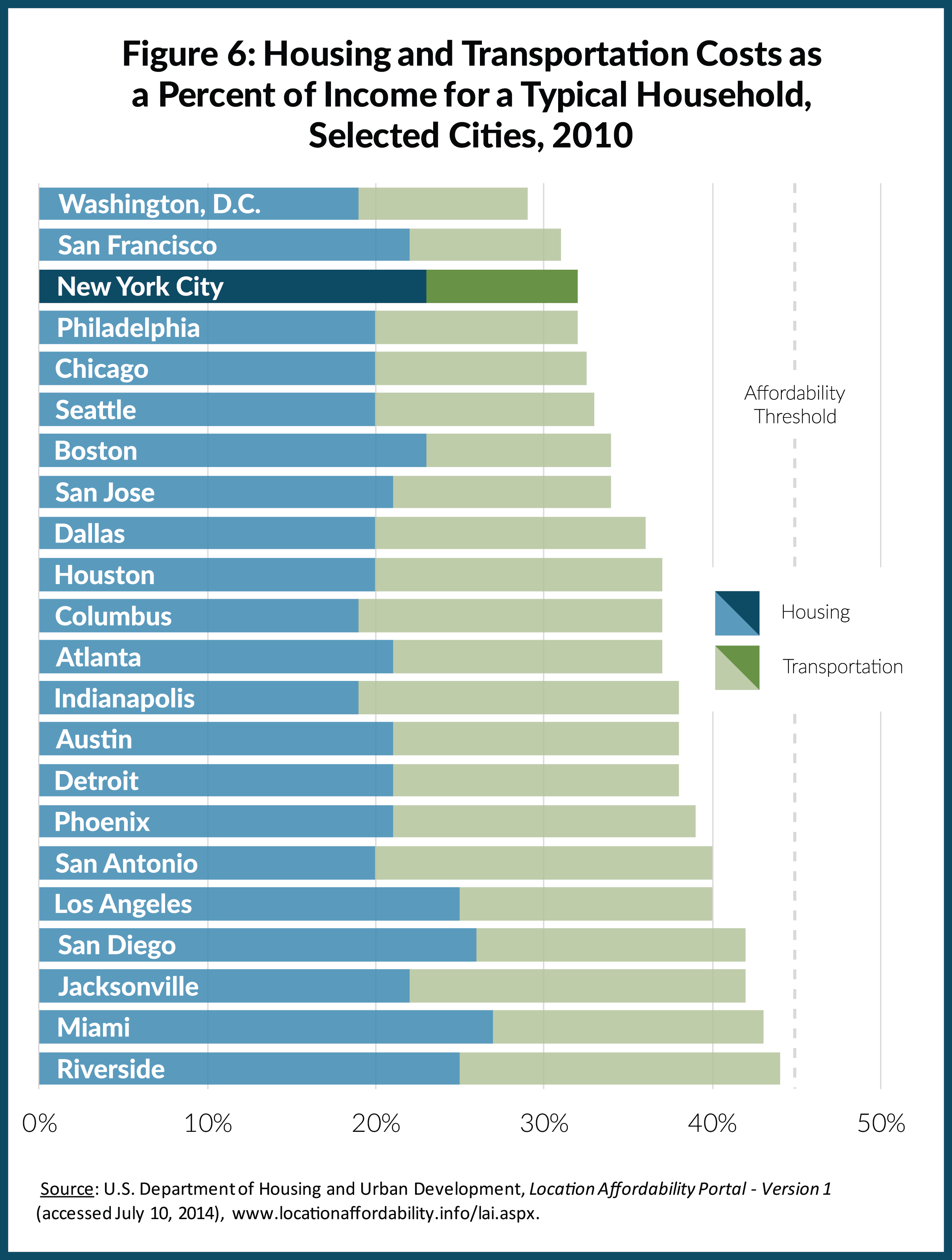 The policy implications of this broader concept of affordability should be clear. New York’s vast transportation system enhances access and encourages increased use of public transit, reducing transportation costs. Municipal leaders should be concerned with the fiscal health and administration of New York City’s major transit agencies – the Metropolitan Transportation Authority, the state and city transportation departments, and the Port Authority of New York and New Jersey. These results also suggest increasing density in transit corridors – an important component of the Mayor’s affordable housing plan – is a sensible approach to development.

Housing Affordability Versus Location Affordability: The Rent's Too Damn High! But the Metrocard Is a Pretty Good Deal