How Much Do City Taxpayers Really Contribute to the MTA?

The Metropolitan Transportation Authority (MTA) funding debate often is framed in terms of whether the “State” or the “City” is paying its fair share. For example, the most recent budget discussion included calls for the City of New York to pay half of the net operating deficit for Access-A-Ride starting in 2020, up from the current one-third.1 The MTA called this renegotiation “equitable.”2 Fairness was also the focus when the MTA included $3 billion from both New York State and New York City for its 2020-2024 Capital Plan and when the State called on the City to split the costs of the Subway Action Plan.

The challenge of this perspective is its focus on the State and City budgets rather than which taxpayers actually foot the bill. These debates would be clearer if it were widely understood that New York City taxpayers provide 71 percent of the MTA’s non-fare and toll, nonfederal revenue through a combination of local, regional, and State taxes.3 City taxpayers not only provide substantial support through the City budget, but also pay the bulk of taxes dedicated to the MTA and much of the contribution made from the State budget.

In 2018 City taxpayers, through the City budget, contributed nearly $1.7 billion of its own tax revenue to the MTA, including $1.1 billion of direct operating contributions (as recorded in the MTA’s November Financial Plan) and $397 million of capital funding.4 (See Table 1.) Of this $254 million in operating and $164 million in capital contributions were for the Subway Action Plan (SAP).5 The City-sponsored Hudson Yards Infrastructure Corporation (HYIC) also contributed $134 million for debt service on bonds issued by to pay for the extension of the No. 7 train.6 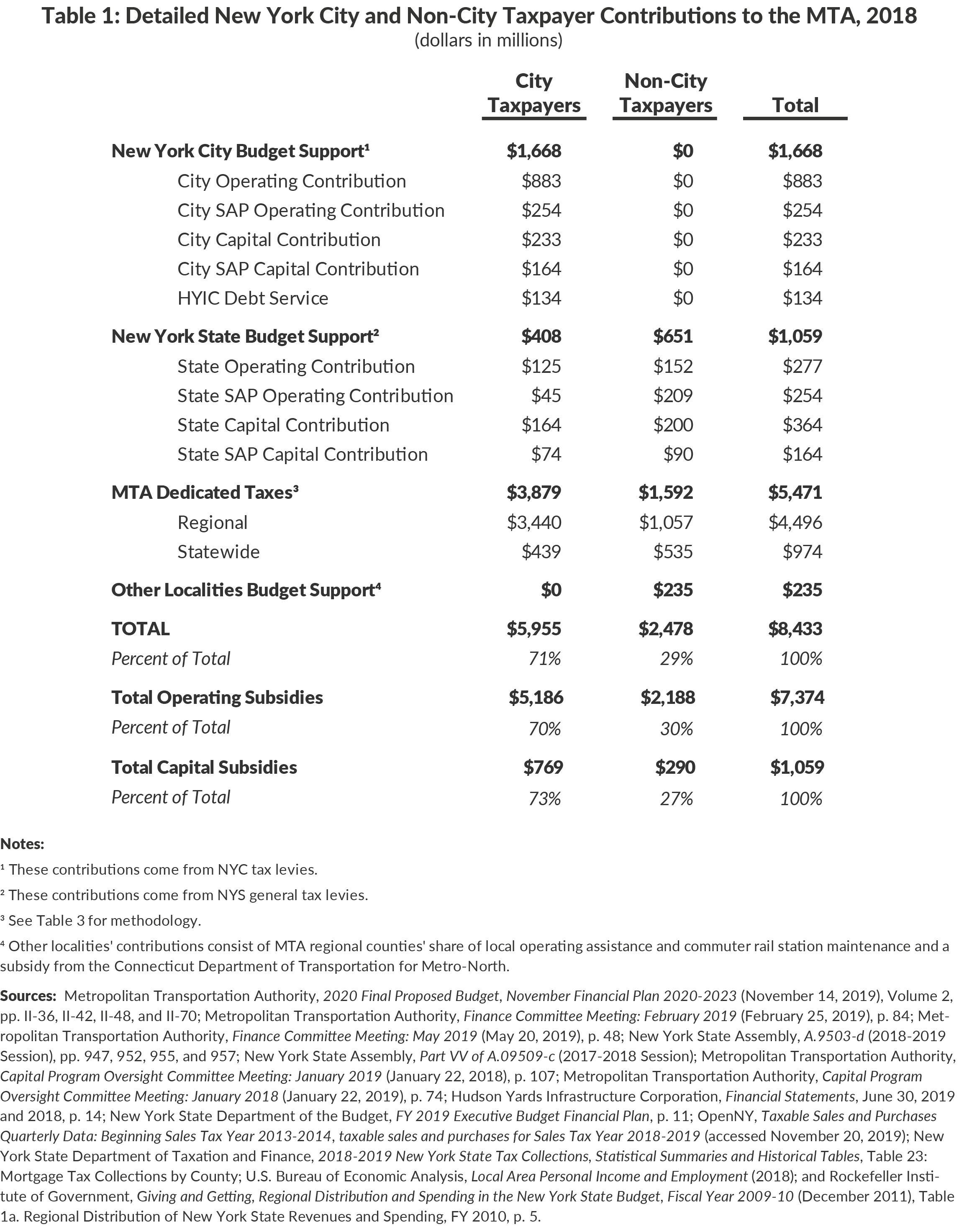 New York City residents and businesses also pay 71 percent of the regional and statewide taxes the State allocates to the MTA. These State-authorized taxes totaled $5.5 billion in 2018, including $4.5 billion from taxes within the MTA region and $974 billion appropriated from statewide general taxes.7

Within the MTA region, the City accounts for 62 percent of the taxable sales and purchases, 76 percent of the collections for mortgage taxes including taxes dedicated to the MTA, and 75 percent of wages and salaries.8 (See Table 2.) Allocating the shares of the various dedicated regional tax revenues reveals that New York City residents and businesses paid $3.4 billion, or 76.5 percent, of the total $4.5 billion MTA regional taxes. New York City taxpayers also contribute 45 percent, or $439 million, of statewide revenues dedicated to the MTA.9 In sum, the City contributed nearly $3.9 billion of the $5.5 billion of the State-authorized general and regional taxes provided to the MTA. 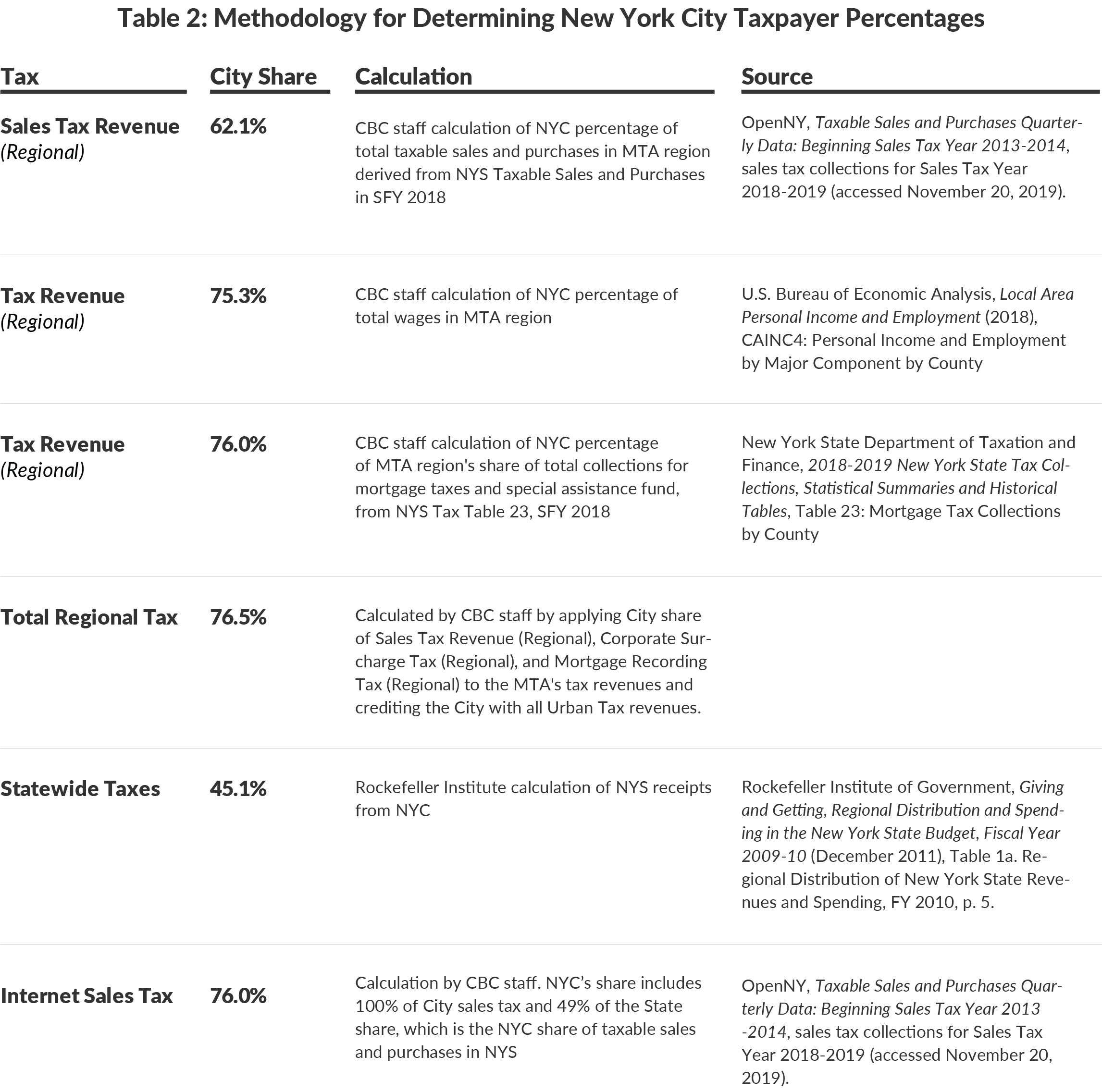 The portion of MTA revenue coming from City taxpayers will increase due to new State-created taxes and fees which will primarily come from City sources. In its 2019 Enacted Budget, the State established a new revenue stream from surcharges on for-hire vehicle trips that start, terminate in, or traverse Manhattan below 96th Street. The MTA forecasts the surcharge will raise $362 million in 2019, growing to $435 million in 2020 and thereafter.15 In the 2020 Enacted Budget, the State enacted legislation directing three new revenue sources to the MTA, which are expected to support $25 billion of the 2020-2024 Capital Program.16 The MTA forecasts the new mansion tax, which applies to New York City real property sales of at least $2 million, will generate $374 million in 2020, growing to $411 million in 2023. The share of City and State internet marketplace tax directed to the MTA will grow from $320 million in 2020 to $329 million in 2023.17 A third source of revenue will come from the creation of a Manhattan central business district tolling program, starting in 2021.18 Toll rates have not yet been set.

Whenever there is a call for “the City” to provide the MTA with funding, it is important to recognize that City taxpayers already provide the majority of the MTA’s subsidies, and will only pay more in future years. 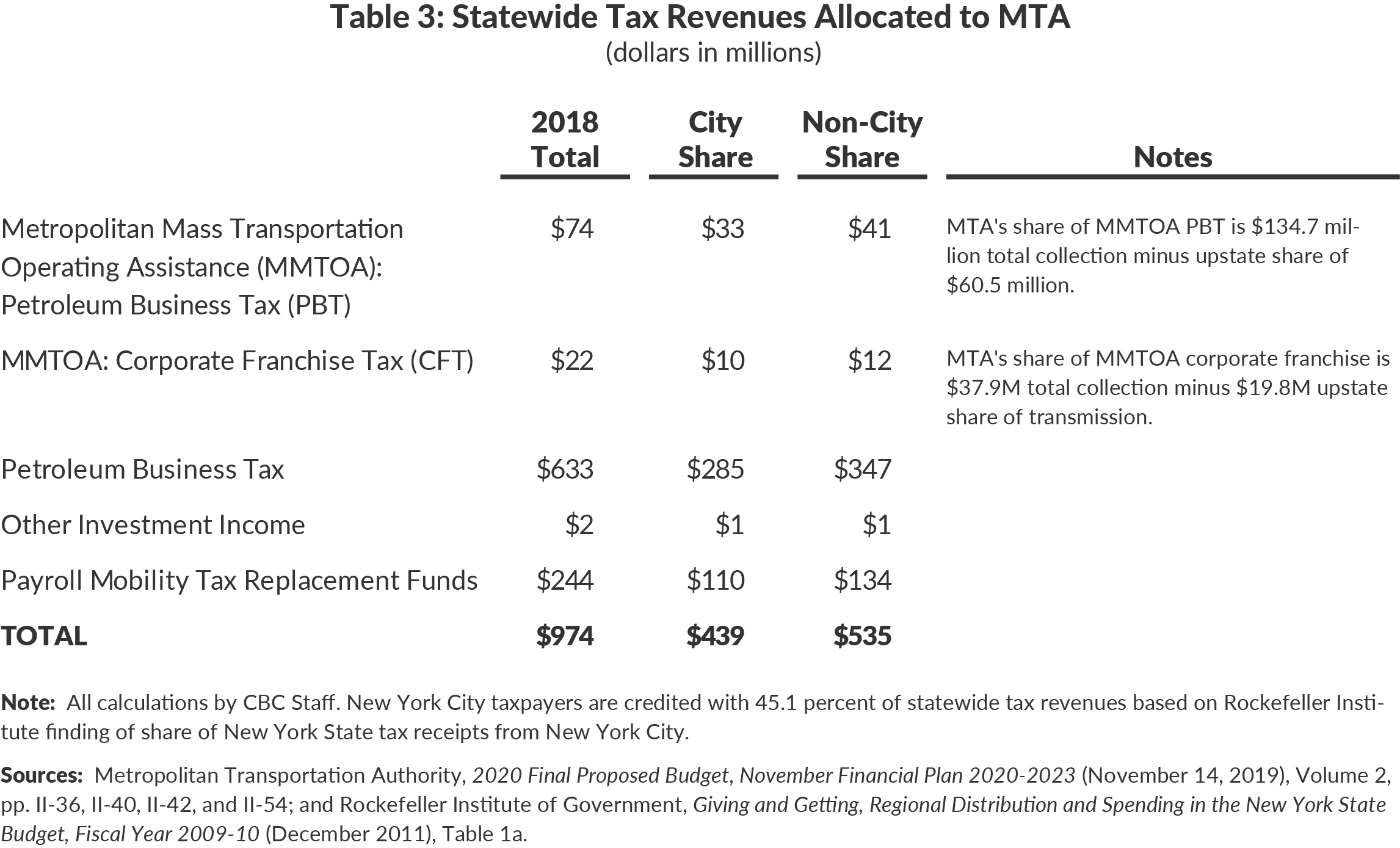 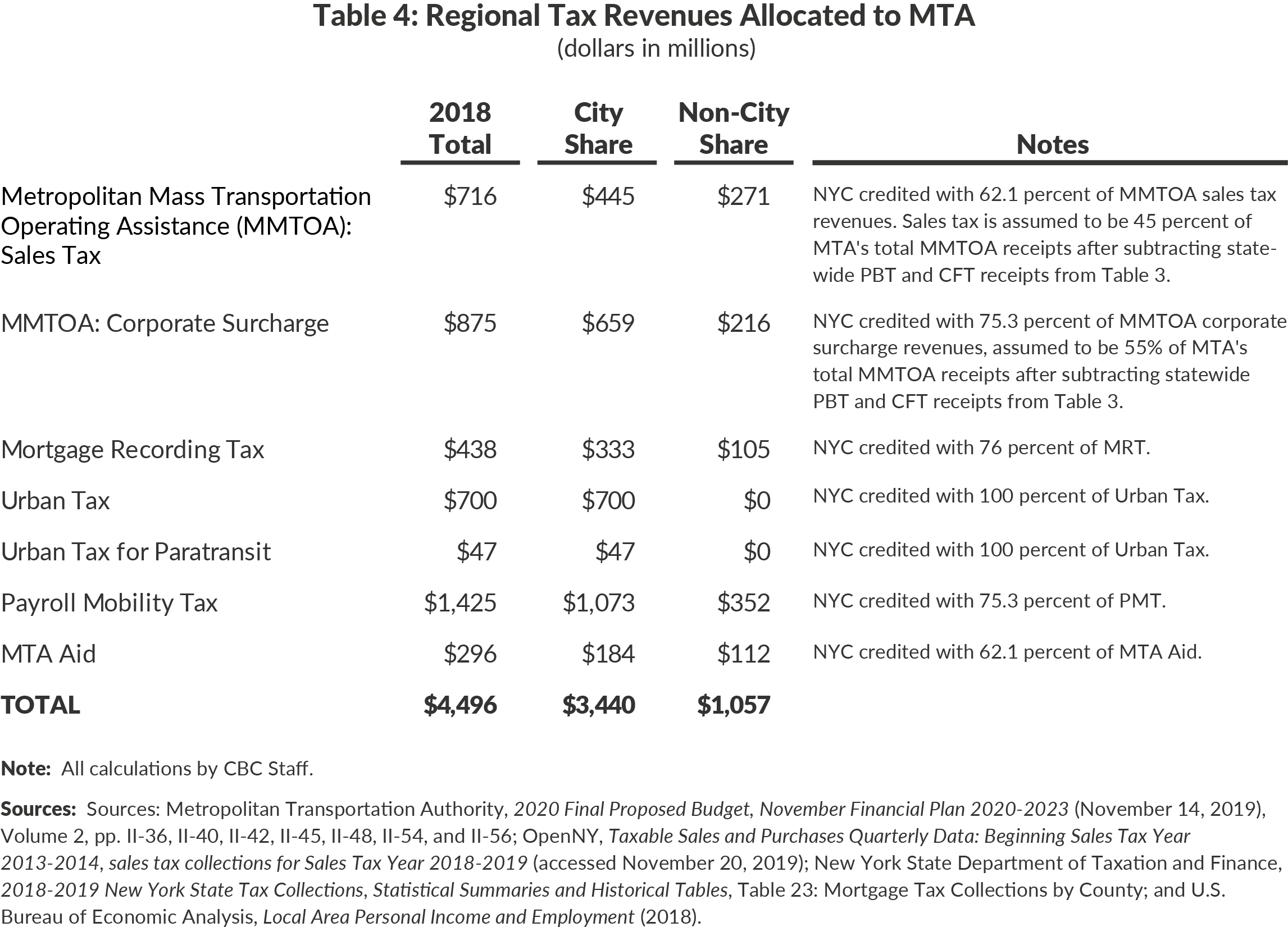 How Much Do City Taxpayers Really Contribute to the MTA?