Needed Mandate Relief on the Way?

New York State imposes more than 200 special education mandates above and beyond those required by federal law.[1] Some were put in place to protect due process or guarantee timely services, while others limit class sizes and caseloads. All translate into higher costs and help fuel rapid spending growth. In 2008-09, the most recent school year for which data are available, the average cost of instruction per general education student in New York State was $10,874; for special education students the cost was 2.4 times greater, at $26,551. Instructional spending for special education has increased over the past decade at an average annual rate of 7.5 percent, growth that is 20 percent faster than for general education.  School districts may find some relief if reforms moving through the New York State Department of Education are approved. The changes would bring New York’s special education procedures more in line with federal requirements.

A set of proposals was released by the State Education Department early in June with the expectation that it would go before the Regents in September after a period of public comment. In September action on the proposals was put off until November. There is no shortage of adversaries. Public employee unions, professional associations, and special education advocacy groups around the State have mounted considerable opposition to the changes. Jobs are at stake to be sure—New York is running one of the most intensively staffed special education systems in the nation. Across all occupational special education titles New York’s school districts employ 1 staff person for every 5.5 students compared to the U.S. average of 10.1.

The Regents should resist the temptation to weaken the proposals or postpone them once again.  The original list of changes under consideration should be on the agenda for the November meeting and approved. Then the forum will shift to the legislature, which can do its part by passing the necessary changes to State law. With special education costs growing exponentially and revenue stream limited by the new property tax cap, school district leaders need greater flexibility to manage services.

What is Special Education and how much does it cost?

Special education began as a federal mandate in 1975. Current federal law requires public schools to offer students aged 3 to 21 with special needs an individually tailored program that enables them to participate with and learn the same material as other students to the maximum extent feasible. In New York there are 13 defined disabilities that can trigger special education services, including autism, learning disabilities as well as visual, hearing, orthopedic, and other health impairments.[2] Services range from “related” services - speech therapy, occupational therapy, physical therapy, and/or psychological counseling - in individual or group settings, to special school placements and one-on-one schooling in the student’s home.

Each student that is “classified” as needing special education is given an Individualized Education Program, or IEP, which spells out educational goals and objectives, and the accommodations and interventions necessary to achieve them. This document is prepared by an interdisciplinary team known as a Committee on Special Education (CSE) for school-age children or a Committee of Preschool Education (CPSE) for preschool children; the Committees include the student’s teachers, parents/guardians, and a variety of other mandatory members. The IEP confers on the classified student a federal right to these exact services. Any variation or change in services provided by the school district must be made on the IEP. 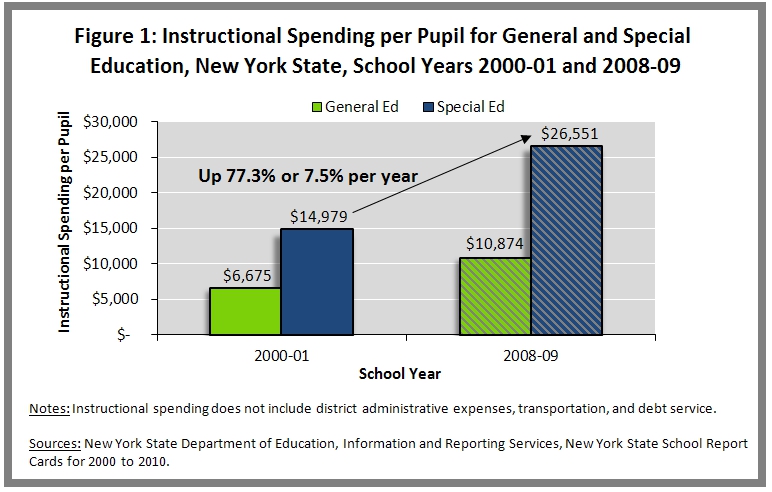 These growth rates are unsustainable. The federal American Recovery and Reinvestment Act (ARRA) provided a temporary boost in school aid and in particular provided funds specifically for special education to help states adjust to the economic downturn, but these funds have run out. State aid for school year 2011-12 was cut $1.3 billion from the previous year’s level and the Governor’s planned growth in school aid is the historical average growth of personal income or about four percent. Moreover, local revenue from the property tax, which provides more than 50 percent of local school district resources outside of New York City, is now constrained by the state-wide property tax cap to growth of 2 percent. It will be nearly impossible to curb school spending to the extent required by these realities without addressing the significant and rapidly increasing expenditures for special education.

Although many factors influence school district staffing decisions, New York’s additions to federal mandates add personnel and, therefore, cost. For example, New York requires that students receiving only related services for a few hours a week or more be classified and given IEPs. Federal law does not require this and other states provide these students with related services without prescribing it on an IEP. New York also requires a psychological exam as part of the process for classification and placement, and that a psychologist be on the committee that decides about special education services. Caseloads, frequencies of service, and class size are also regulated.

These State mandates contribute to a system of special education that is one of the most intensively staffed in the nation. Across almost all categories New York ranks in the top ten states for student-to-special-education-personnel ratios. In three categories—psychologists, occupational therapists, and physical therapists—New York ranks number one. (See Table 1.) For teachers and speech and language pathologists New York ranks number two. For social workers New York ranks third. Overall New York employs nearly two times as many professionals per special education pupil than the national norm—the student-to-staff ratio in New York is 5.5 compared to the U.S. average of 10.1. 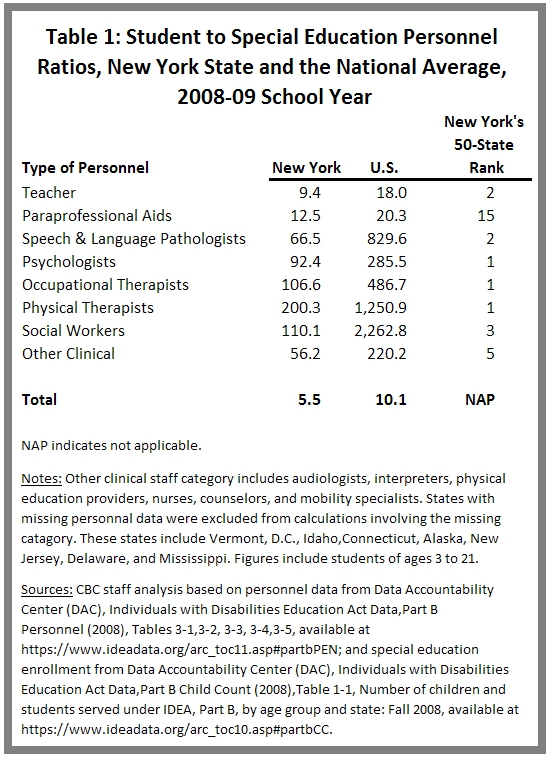 Changes under Consideration by the Board of Regents

The Board of Regents has been making progress in reducing special education mandates. Mandate relief proposals were approved at the November 2010[3] and March 2011[4] Board of Regents meetings.  A third round of relief is expected to be on the agenda for the Regents November 2011 meeting. The proposals under consideration have been the subject of a public comment period that began in June. These should go to the Regents unchanged by pressure from special interest groups. The agenda for the meeting should contain the following special education mandate relief items:

These proposals would provide school districts greater flexibility to meet student needs and control spending. One of the core principles of special education is to provide individualized services. Blanket policies that govern district spending and lock in more intensive services than students may need should be abolished. Service quality as measured by student performance should be the indicator of success, not specific staffing ratios.

The Regents are to be commended for their efforts to relieve school districts from burdensome, unnecessary mandates in the face of significant opposition from public employee unions and professional associations throughout the State. The parents of special education students are understandably concerned about changes to regulations that impact their children’s education, but there is no evidence that the pending proposals (or those adopted previously by the Regents) will diminish the quality of special education in New York State.  The Regents should approve this third round of mandate relief proposals as is, and the Legislature should follow suit and move swiftly to make the necessary statutory changes.