3 Things Owners and Renters Should Know

The property tax is New York City’s largest source of revenue. It is projected to generate $24 billion in fiscal year 2017, or 44 percent of all City tax revenues and about twice as much as the second largest source, the local personal income tax. The Preliminary Budget for fiscal year 2018, to be released by Mayor Bill de Blasio in January, will likely project growing property tax revenues despite the Mayor’s commitment to not increase property tax rates.

The scale of property tax revenue is related to the large and growing value of real estate in New York City. From fiscal years 2000 to 2017 the value of property more than tripled from $382 billion to $1.47 trillion.1 (See Figure 1.) The pace of growth was uneven: the Great Recession of 2008-2009 separated periods of rapid and moderate growth. From fiscal years 2000 to 2009 growth averaged 12 percent annually; since fiscal year 2011 the average annual increase has been 5.4 percent. Market value growth is due primarily to appreciation of existing real estate, but includes significant new construction and renovation.

Strong market value growth has translated into robust revenue growth. From fiscal years 2000 to 2017 the tax levy tripled from $8.4 billion to $25.8 billion.2 This is partly due to a significant rate increase following the economic downturn in 2001 and 2002, but even after adjustment for this rate change the annual growth averages 5.8 percent.  Of the $17.4 billion growth in revenue between fiscal years 2000 and 2017 only about $4.0 billion or 23 percent is attributable to the rate increase; the remainder reflects the rise in property values. 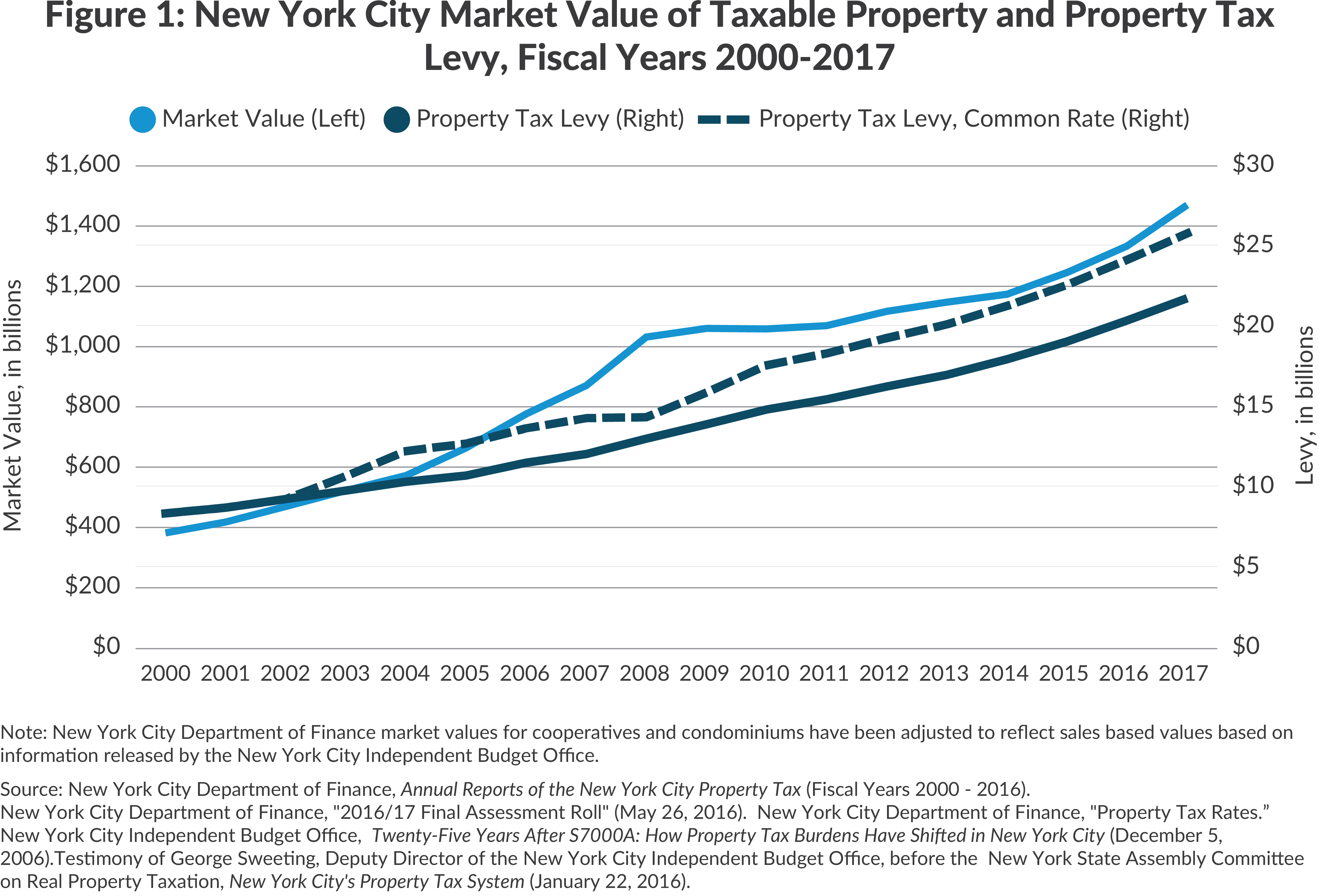 In the context of this vibrant growth in values and revenues, New Yorkers should understand three important features of the New York City property tax:

Tax bills go up even when the tax rate does not

Since the 1990s, changes in the overall property tax rate have been infrequent.3 The City enacted an 18.5 percent rate increase effective January 1, 2003; a rate reduction for fiscal year 2008 was repealed the following year, and the rate has been the same since then.  Despite the stable tax rate, taxpayers’ bills have continued to increase because property values have grown. 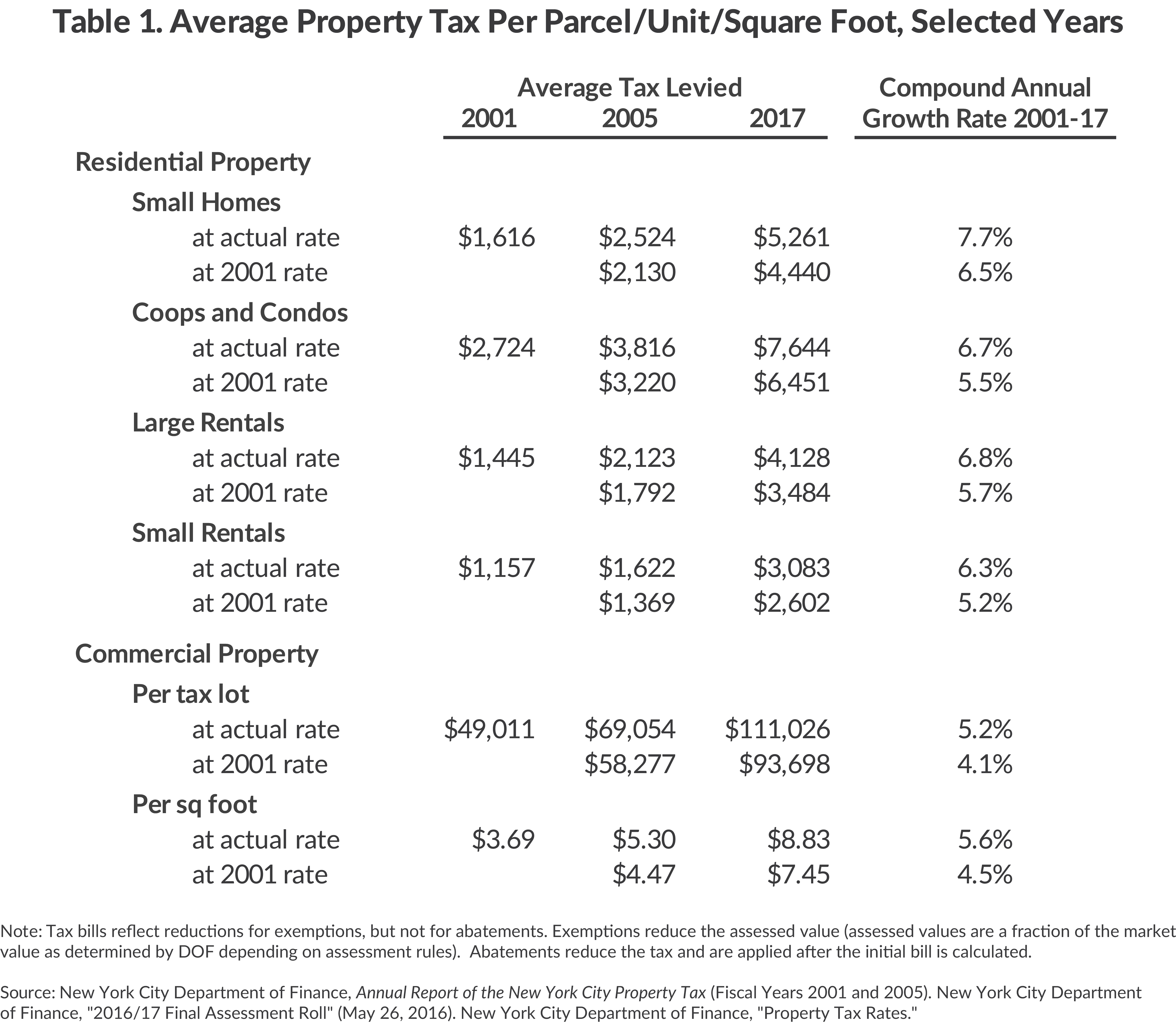 New York City has different tax rates for different types of property. The best measure of tax liability is the effective tax rate (ETR); it relates the tax bill to the market value of the property. This differs from nominal or statutory tax rates that are not comparable across types of property due to differences in assessment and other tax rules and practices. Figure 2 presents the average ETR by property type in fiscal year 2017. In addition to the residential and commercial properties discussed above, the figure includes property owned by utilities such as Consolidated Edison and Verizon. These utility properties are subject to the highest ETR, 4.8 percent; however, utility properties account for a small share of market value and tax levy (about 2 percent and 6 percent, respectively). These companies’ relatively high taxes are passed on to customers in their utility bills.

Commercial property is also subject to a relatively high average ETR, 3.87 percent; as a result, commercial properties account for fully 42 percent of the property tax levy, despite comprising less than 20 percent of total market value in fiscal year 2017. (See Figure 3.)

Small homes and coops and condos are subject to the lowest ETRs, 0.74 percent and 0.86 percent respectively.5 Although these properties represent a combined 69 percent of total market value, they are responsible for only 32 percent of the total tax levy. 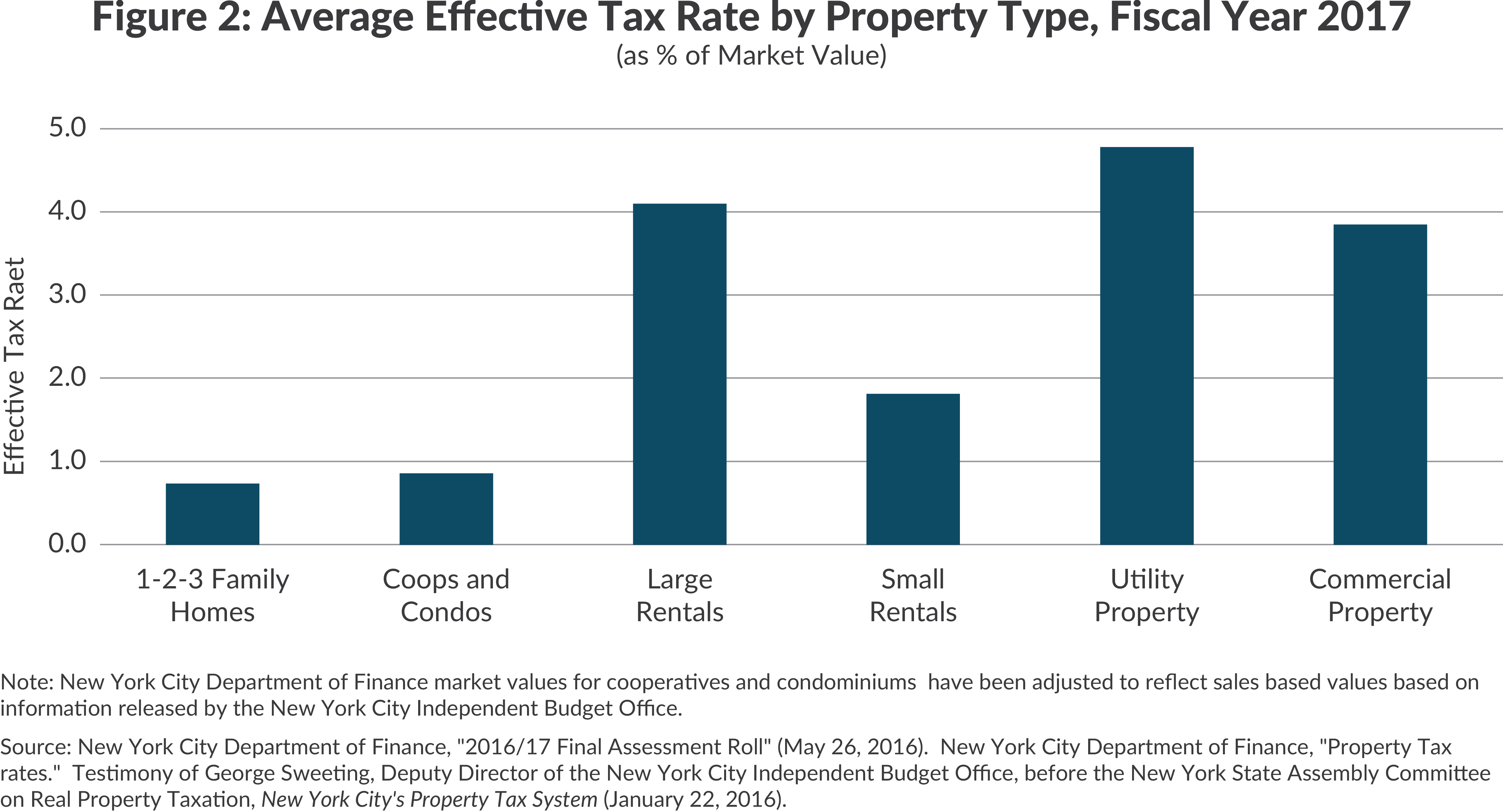 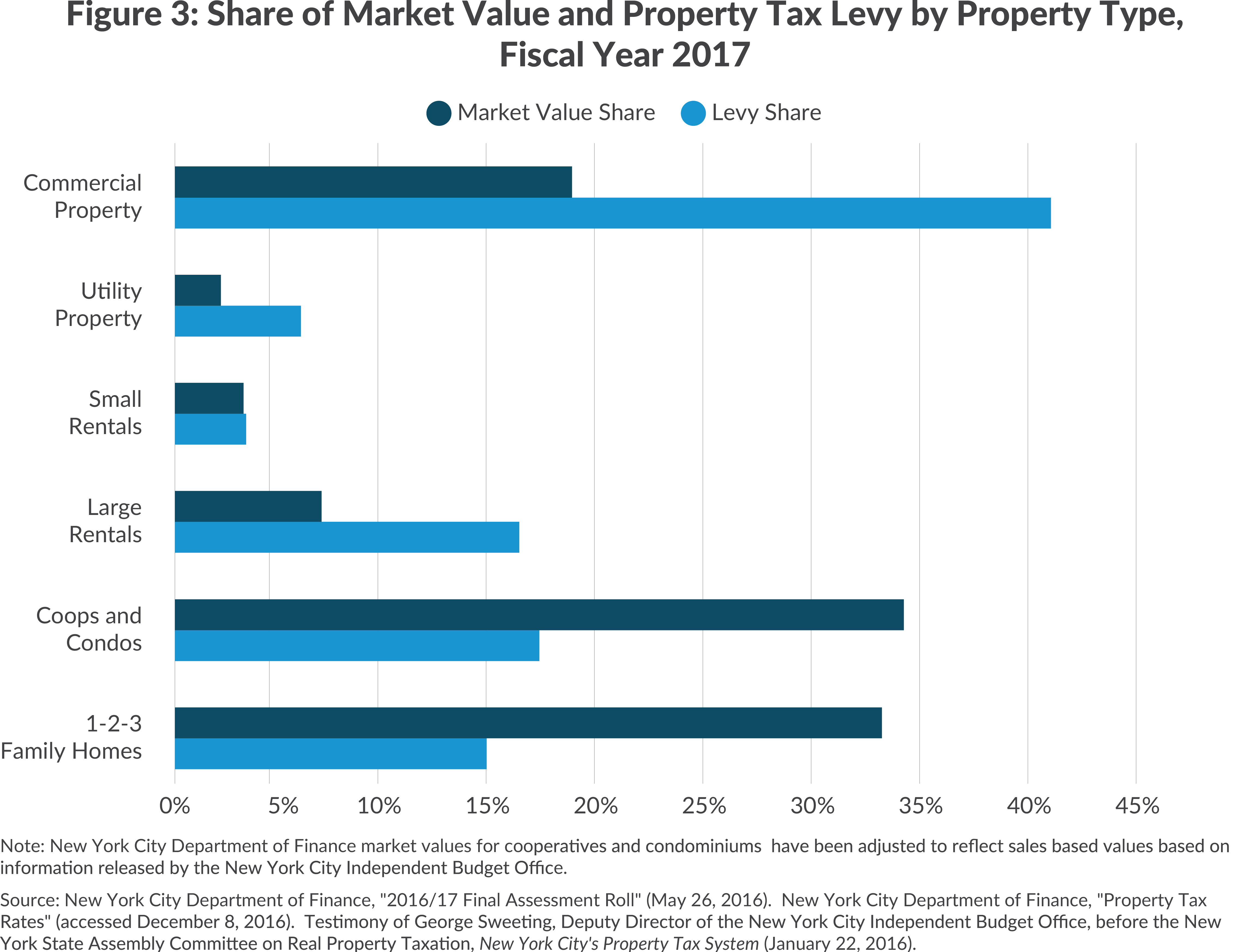 New York City is not unusual in having different ETRs for different types of property, but comparative data available for 53 large cities reveals it is unusual in the magnitude of these differences.8 Figure 4 presents two ratios for the cities with the 20 highest ETR disparities between small homes, coops, and condos, referred to as “homestead properties,” and (1) residential rental buildings and (2) commercial properties. For example, a ratio of 2 means rental (or commercial) properties pay an ETR twice that of homestead properties.

With respect to residential rental properties, none of the cities come close to New York in the disparity: New York’s ratio of 5.1 is well above that for second place Columbia, South Carolina (3.7). Only four other cities have a ratio of 2.0 or more. Among all 53 cities, 15 have a rental ratio at or below 1.0, indicating no preferential treatment for homestead over rental properties. 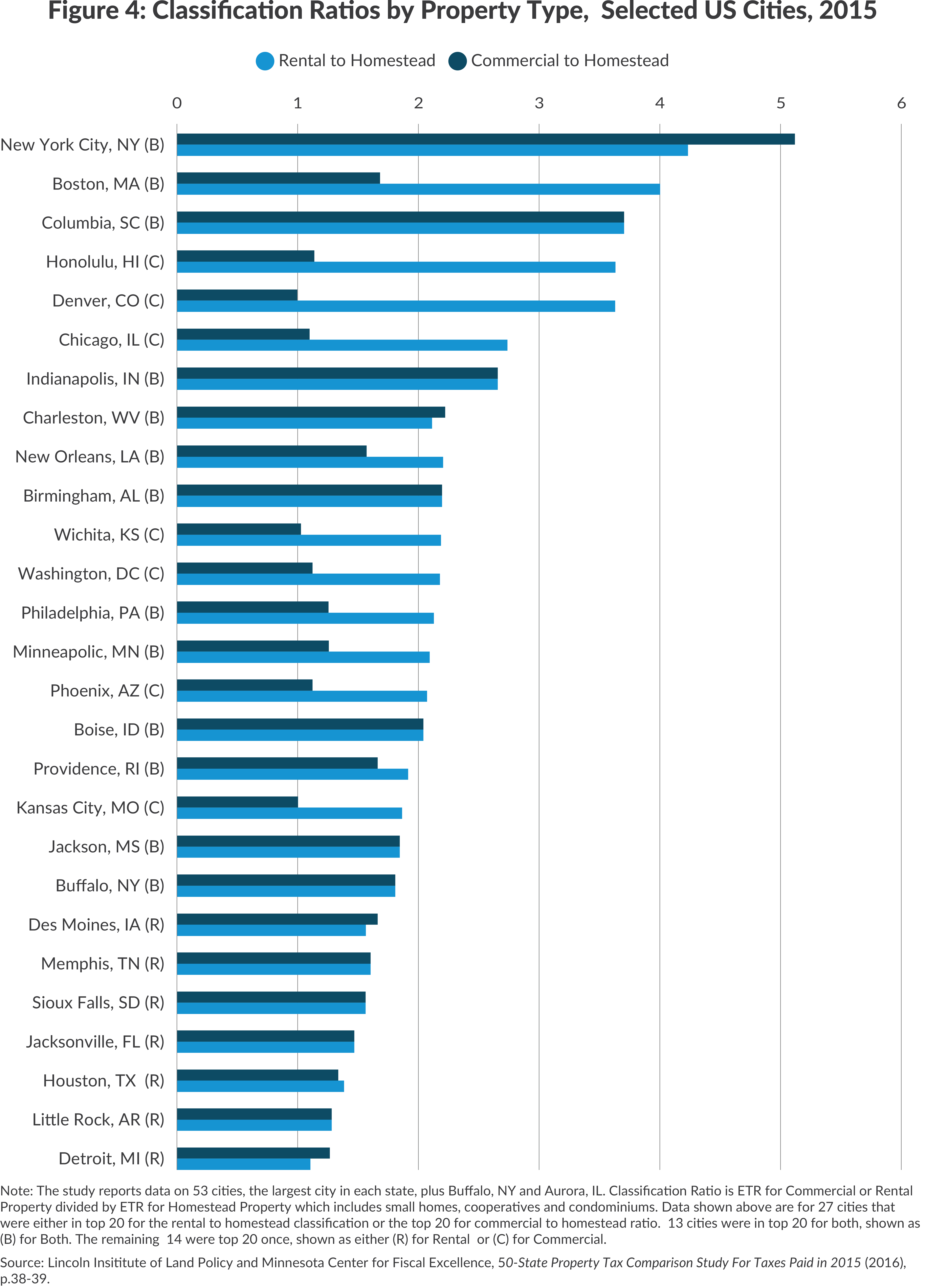 Perhaps more concerning to taxpayers than discrepancies in rates between different property types is the wide disparities in ETRs among similar properties. Properties of the same type and valued at the same amount often pay very different tax bills.  These disparities exist among all property types.

About 1.3 million rental units are in buildings that pay property taxes (public housing and some other affordable housing is fully exempt and not included in this analysis). Of those, about 300,000 units are in buildings with 10 or fewer units, while the rest are in larger buildings. Smaller rentals tend to have lower ETRs, with a median of 1.78 percent, going up to 5.8 percent.  For a unit valued at $125,000, the median tax bill would be $2,225. The highest bill a unit of this value would see is $7,250, more than three times the median. Larger buildings have a substantially higher median ETR of 4.82 percent.10 For a unit valued at $125,000 in such a building this would mean a tax bill of $6,025, with some bills as high as $7,250.11

Commercial property includes a variety of buildings, from stores to office buildings to warehouses to parking garages and hotels. The median ETR for these properties is 4.17 percent. At that rate a commercial building valued at $5 million would have a tax bill of $208,500. At the higher end of the distribution the ETR reaches a maximum 4.8 percent and a relatively large number of properties cluster there. The tax bill on a $5 million building at the highest rate would be $240,000, about 15 percent above the median. At the lower end of the distribution the range is far wider with a cluster of properties having ETRs at or near zero; their tax bills would be minimal.

To see how wide the disparity is in effective tax rates by type of property, click here.

For small homes and apartments in small buildings, the growth rate for assessed value from one year to the next or over five years is capped.12 While this gives owners protection against rapidly rising bills, its less explicit consequence is to lower the ETR for homes in neighborhoods with rising property values and keep it high for homes in areas with stable or declining values. If market values are growing at a faster rate than the 5-year cap, the properties’ ETRs will decrease over time.

Larger apartment buildings and commercial properties do not have caps on assessed value growth, but the change in value in a given year is phased in over five years in equal parts.13 Typically, the impact over multiple years is more modest than that of a cap, but it does contribute to inequities among buildings. As with caps, these provisions have the secondary consequence of imposing higher ETRs on units in neighborhoods with stable or declining values while lowering notably the ETRs on units in neighborhoods where values are rising, with the most dramatic favorable impact on those benefiting the most from property appreciation.

Much of the variation in ETR among properties of the same type stems from an array of exemption programs that have specific eligibility criteria and set benefit levels.  Individual, or “personal,” exemptions provide tax reductions for residential owner-occupied properties based on the income, residency, disability, and/or age of the owner. Housing and economic development exemptions are granted to buildings to spur economic activity and construction (or renovation). Residential buildings receiving housing development exemptions can be renter or owner-occupied.

The city granted more than 520,000 individual exemptions in 2016; a unit can benefit from more than one program.14 The School Tax Relief Program (STAR) is the most common personal exemption; it reduces property tax by $300 for eligible homeowners, while enhanced STAR (for seniors with income below $86,000) reduces taxes by $600. There are also exemption programs for senior citizen and disabled homeowners with incomes below $37,400 that can reduce the assessed value by up to 50 percent, as well as exemptions for veterans.15

Exemptions for housing and economic development are fewer in number, but are more costly as they provide more generous tax reductions (more than $3 billion in 2016, compared to $350 million for personal exemptions) and generally provide benefits for 10 to 25 years.16 Three programs– for new construction of housing (421-a), housing renovation (J-51), and commercial development (Industrial and Commercial Incentive Program or ICIP)– represented over 100,000 of the 120,000 housing and economic development exemptions in 2016. Condos and rentals with very low ETRs are often new construction receiving 421-a exemptions, while coops and rentals that underwent renovation can receive significant tax reductions from J-51. In 2016, about 15 percent of rental buildings received a partial exemption, in contrast to less than 7 percent of commercial properties receiving exemptions under ICIP.

The City also administers abatement programs which are not reflected in the ETRs.  The coop and condo abatement program, which can lower tax bills for qualifying units between 18 and 28 percent, is the largest at $429 million. Apartment buildings undertaking renovation can also receive a J-51 abatement (apart from the J-51 exemption).  There were almost 96,000 abatements in 2016 that reduced property taxes by a cumulative $85 million. Some commercial properties are benefitting from the Industrial and Commercial Abatement Program, which replaced ICIP.  In 2016, there were 442 abatements under this program, worth $28 million.17 Units and buildings receiving these benefits will have even lower property taxes than reflected in their ETRs.

The substantial variation in effective tax rates paid by different types of properties results from policy decisions of city and state elected officials: owners of small residential properties are sheltered from higher taxes at the expense of owners of commercial and large rental buildings. The scale of the differences in New York City is far greater than in other cities, making rental housing and commercial space more expensive and impeding the city’s economic competitiveness. In addition, policy decisions to shield certain types of owners from rapid increases in taxes due to appreciation in the value of their properties underlie the wide variations in ETRs among properties of the same type.  Unfortunately these largely unintended consequences create significant inequities among otherwise similarly situated New York residential and businesses property owners.

3 Things Owners and Renters Should Know About NYC Property Taxes