No Contract Does Not Mean No Raises

The fact that the entire unionized New York City municipal workforce is working under expired contracts is a big problem, but it does not mean that all municipal workers have gone without raises since their contracts expired.

The problem and the misunderstanding about raises are greatest with respect to teachers, represented by the United Federation of Teachers (UFT). The last UFT contract expired at the end of October 2009, while most other unions’ contracts expired about two years later. If a new UFT contract followed the pattern of raises established in agreements with other municipal employee unions for the two years before most of their contracts expired, then the City would face retroactive payments totaling as much as $3.2 billion in the current fiscal year, an unmanageable obligation under almost any realistic fiscal scenario.[1] That is a serious problem, but it does not follow that teachers have received no pay increases in recent years. In fact, State law requires that automatic pay increases continue according to a salary schedule under the expired contract, and this provision has yielded significant increases for New York City teachers.

The teachers’ pay rates are specified in a salary schedule set in the union contract. The schedule is based on two factors: length of service and level of education. Teachers receive pay increases for each year of service from their first year to their eighth year, and further increments at their 10th, 13th, 15th, 20th, and 22nd years of service. These increments are referred to as “steps.” While teachers are required to have at least a bachelor’s degree, they then receive raises if they earn a master’s degree and if they earn 30 credits beyond a master’s degree. The salary amounts associated with each length of service and level of education are summarized in Table 1. The range in annual salary is from $45,530 to $100,049.[2] 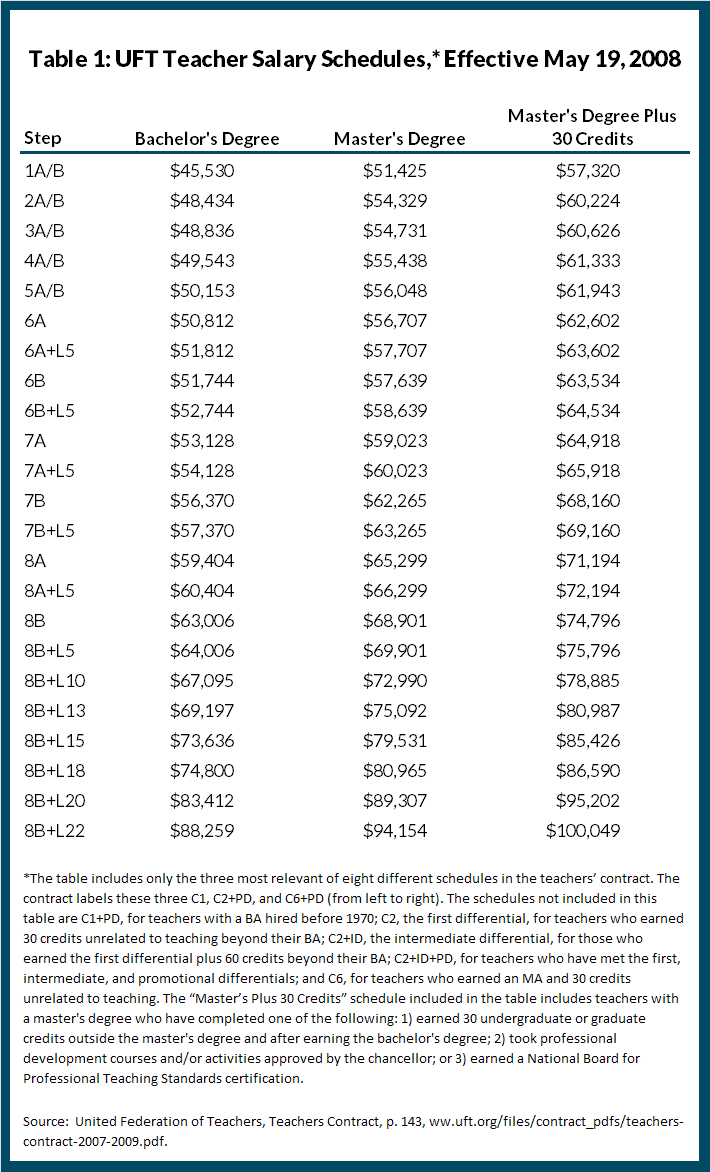 In addition to salaries, a second source of increased compensation is more valuable health insurance. Like other municipal employees, teachers are entitled to a comprehensive health insurance policy for themselves and their families with premiums paid by the City. The amount the City pays is equal to the premium for hospital and medical coverage by the Health Insurance Plan of Greater New York (HIP). This premium has increased each year during the period since the contract expired. The total increase over the period for single coverage was $2,474, from $4,476 in fiscal year 2009 to $6,950 in fiscal year 2014. For family coverage, the increase over the same period was $6,061, from $10,966 to $17,027.[3]

The magnitude of the pay increases teachers received since their contract expired can be illustrated using three hypothetical teachers at different stages of their careers: “Mr. Thackeray,” a starting teacher; “Ms.  Bliss,” a teacher with six years of experience; and “Ms. Brooks,” a teacher with long-term service. In each case, the raises received since the 2009-10 school year, when the contract expired, are significant, ranging from $13,109 to $20,264.

A New Teacher.  Mark Thackeray graduated from college with a bachelor’s degree in May 2008, and began teaching in September 2008, the year before the contract expired. His starting salary in September was $43,362. Under the contract in May 2009, the salary increased to $45,530. The latter figure is the base from which one can calculate changes in the period for which there is alleged to be no raises.

In September 2009 Mr. Thackeray’s salary increased to $48,434 because he had completed one year of service and moved to the second step. (See Table 2.) Another step increase in September 2010 raised the salary to $48,836. In September 2011 Mr. Thackeray’s salary rose to $55,438 because of another step increase and because he had been going to school evenings and summers to complete his master’s degree in June 2011. This is not unusual as teachers are generally required to have a master’s degree within five years of starting work. 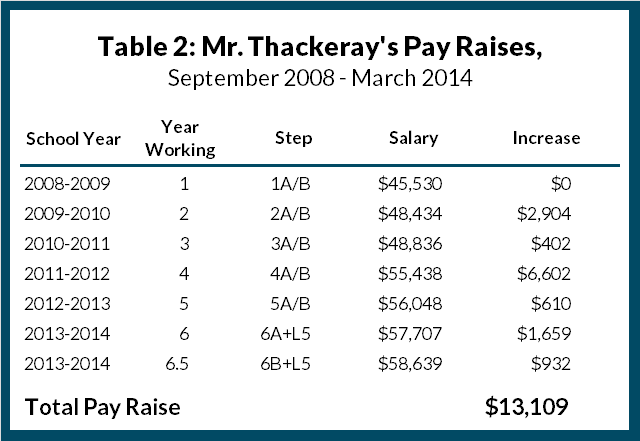 In September 2012 another step increase brought the salary to $56,048. In the current school year, Mr. Thackeray’s salary increased at the start of the year to $57,707 due to a step and a longevity increase for completing five years of service; in mid-year he received another step increase bringing the current annual rate to $58,639. Thus, the salary increase from September 2009 to his current rate is $13,109 or 29 percent of the base.

A Teacher with Moderate Experience. Carrie Bliss was in her sixth year of teaching in the 2008-09 school year and had completed her master’s degree. The increase to the pay schedule effective in May 2009 brought her annual salary to $58,639, a base from which to track subsequent raises.

During her seventh and eighth years of service, Ms. Bliss received step increases that brought her salary to $69,901. (See Table  3.) In addition, by June 2011, she had completed an additional 30 credits beyond her master’s degree. This brought her salary in September 2011 to $75,796. She received no raise in the 2012-13 school year, but a 10-year longevity increment brought her salary for the current school year to $78,885. The total salary increase over the period is $20,246, or 35 percent of the base year salary. 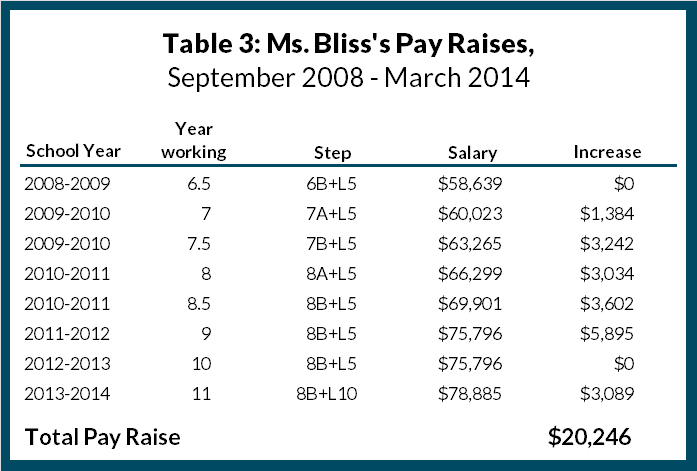 A Teacher with Extensive Experience. Connie Brooks completed her 18th year of service in the 2008-09 school year. Since she had already earned a master’s degree plus 30 credits, the increase in the pay schedule in May 2009 brought her salary to $85,426, a base from which to track subsequent raises. 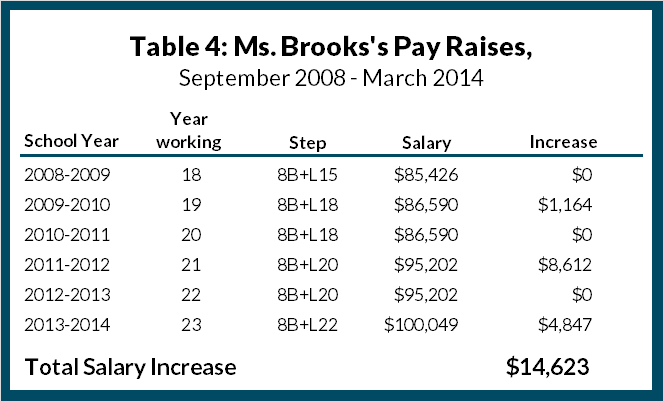 A Teacher with No Raise? The three individuals described above are typical of teachers at different levels of experience, and each received numerous and  substantial raises since the last pay schedule change under the expired UFT contract. But are there teachers who went without raises?

The teachers without opportunities for salary increases are those who in September 2009 had already completed 22 years of service and had earned a master’s degree plus 30 credits. They would have been earning $100,049 then and would not have been eligible for any subsequent salary increment. A reasonable estimate is that about 9,500 teachers, or 13 percent of all teachers, fit this description; it is not known how many stayed for the next five years rather than retiring.[4]

If the compensation increase related to higher health insurance premiums is considered, the number of teachers without a raise is far smaller. Only those teachers both fitting the above description and opting not to take insurance through the City’s plan would have received no raise. The number of such individuals is not reported, but likely is quite small. One can assume a teacher would not enroll for the City-subsidized insurance only if their spouse or partner had better coverage with no or limited premium cost sharing; only the most generous private employers offer such arrangements.[5] Thus, those without any form of raise would be the few teachers with six-figure salaries and spouses or partners with generous employment terms.

By Charles Brecher and Rachel Bardin

[2] Most economists include the payroll taxes paid by employers for social insurance programs as part of an employee’s compensation. This would increase each of the amounts in Table 1 by 7.65 percent.