One Good Way to Save More on Medicaid

Governor Andrew Cuomo’s 27-member Medicaid Redesign Team is charged with identifying $2.85 billion of annual Medicaid savings by March 1. The Department of Health has provided a menu of 49 proposals, but the savings estimates tally only to $1.9 billion – nearly $1 billion short of the goal.[1]  One of the proposals – reforming the state’s payment method for nursing homes – can and should be strengthened to increase savings and improve care.

New York’s Medicaid payment rates for nursing home care have been well above national norms for many years. A national survey shows that average per diem Medicaid rates in 2007 were $203.21, 30 percent above the national average and fourth highest in the country.[2] New York also spends heavily in the aggregate on nursing care. In 2008, New York spent $6.7 billion on residential nursing home care, or $50,563 per Medicaid recipient in a nursing facility.[3] New York’s per beneficiary spending ranks it tenth in the nation and 16 percent above the national average.[4]

But New York’s high spending is not buying a superior quality of care. As shown in the table below, New York’s nursing homes do only slightly better than the national average in most available quality measures, and they are below the national norm in keeping patients mobile, free of pressure sores and in control of their bladders. 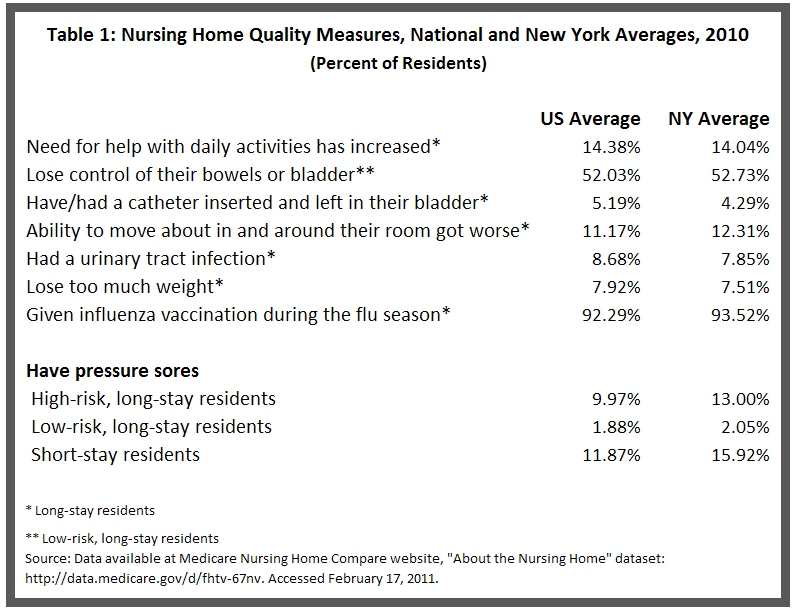 The proposal before the redesign team would reshape an outdated system. The current payment method is based on the costs incurred by individual nursing homes in 1983. Those costs are divided into four categories – direct, indirect, capital and non-comparable – and each has been increased annually based on inflation within certain limits. This payment method assigns each facility its own rate, leading to notable disparities in payments to homes in the same region treating similar patients. The current method does not encourage nursing homes to operate more efficiently and it does not encourage facilities to provide higher quality care.

The proposed payment system would establish a single base payment rate statewide. This base rate would be adjusted for each nursing home based on the conditions (case mix) of their patients and other facility-specific factors such as average labor costs. The statewide rate would be based on nursing home costs in 2007, but lowered from actual costs to yield annual savings of $100 million.

To cushion the impact of reduced revenues for the facilities that “lose,” the proposal includes a transition pool that would exist for the first three years of the new system. During this period funds that otherwise would go to the “winners” will be placed in the pool and distributed to the “losers.” The amount allocated to the pool diminishes from the full $214 million in gains in the first year to $144 million in the second year, $70 million in the third year, and is eliminated in the fourth year.

The estimated total savings (including federal funds) from the proposed system is $75 million in the coming fiscal year and $100 million annually in the following three years. That translates into $37.5 million in savings of State funds (which is what counts in terms of the $2.85 billion goal) and $50 million in each of the three following years. The lower savings in the first year stem from an anticipated July 1, 2011 start for the new payment method.

This is a necessary and overdue reform, but it does not go far enough. The Medicaid Redesign Team should consider lowering payment rates even further and including a quality care pool to reward facilities for improving care to residents.

Deeper cuts in nursing home payments are justified because, as noted above, the rates in New York have been higher than national norms for many years. The proposed $100 million in annual savings represents a cut of less than 1.5 percent.

New quality care pools are needed to promote better care.  In 2008, nursing homes statewide provided an average of 3.6 hours per day of direct nursing care, below the national average of 3.7 hours per day.[5] The Department of Health has already established a framework for a quality pool system based on a range of quality measures.  The State would rate facilities on the level of contact nursing staff have with residents each day, the facilities’ recertification scores, and a set of national quality indicators such as those noted above.

Given the high Medicaid spending on nursing homes, the Medicaid Redesign Team should strengthen the payment reform proposal to achieve greater savings and to provide financial incentives for improved care.