Predicting the Peak, Preparing for the Trough

The New York State economy continues to thrive; as of June 2016, the State is in its 82nd month of economic expansion. As noted by the State Division of the Budget (DOB), it is the fourth longest postwar expansion on record.1 The State’s 2016-2017 Enacted Budget Financial Plan projects growth in employment and income well into 2019, but the rate of expansion is projected to be slightly slower than DOB originally assumed in the Executive Budget in January.2 Although recessions are difficult to predict, the length of the economic expansion indicates that a recession could well occur within the financial plan period. This policy brief assesses the potential impact of a recession on State tax revenues and finds that the loss could be as high as $59 billion, or 18.2 percent of tax revenues over four years.

This is the third in a series of CBC publications analyzing the potential impact of a recession on public sector organizations. The first, an analysis of New York City’s financial plan released in April 2015, found the cumulative four-year impact of a recession could be as much as $15.8 billion or 9.5 percent. The second, analyzing the Metropolitan Transportation Authority (MTA), indicated a potential impact as high as $4.6 billion or 7.3 percent over four years.

One reason for a relatively more severe impact on New York City is that it relies heavily on comparatively few individuals and businesses for a large share of revenues via the personal income tax and corporate franchise taxes. In contrast, the MTA relies on less volatile sources, including fares.

New York State’s tax revenues come from the personal income tax (PIT), sales and use taxes, business and corporate taxes, and some other smaller taxes; in 2016, these taxes totaled $74.7 billion. The majority of tax revenues – more than 60 percent – come from the PIT, and the State’s reliance on PIT revenues has increased over  me, growing from 54 percent of tax revenues in 1986 to 63 percent in 2016 (See Figure 1). 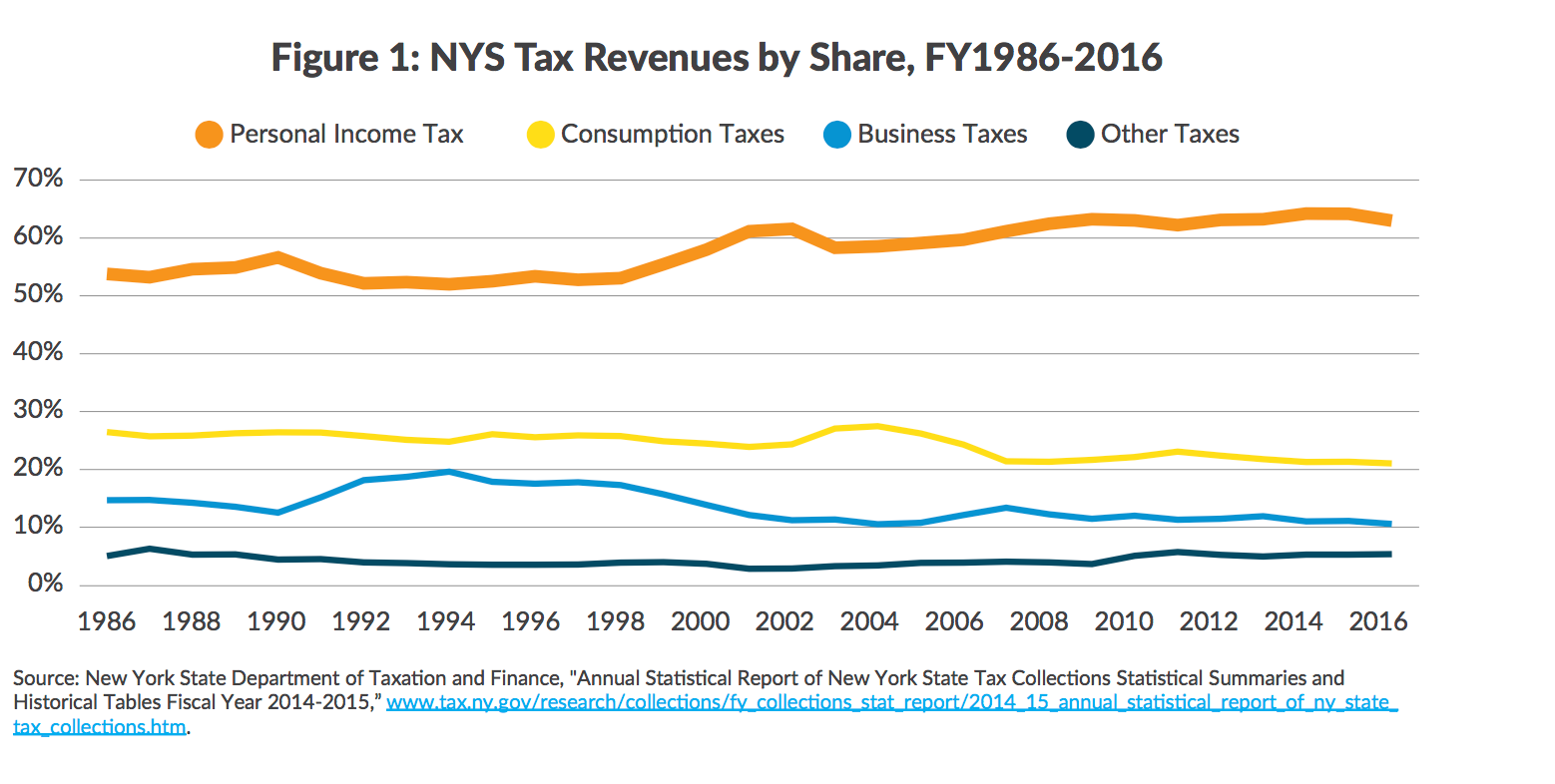 As the State’s reliance on PIT revenues has grown, so has the percentage of PIT revenues that are paid by the highest earners, making the PIT a particularly volatile source of revenue. Between 2002 and 2015, the contribution from the top 1 percent of taxpayers increased from 32.2 percent to 41.5 percent.3 Similarly, taxpayers with adjusted gross incomes (AGI) in excess of $1 million accounted for only 0.6 percent of filers but 27 percent of AGI and 40.2 percent of PIT liability in 2016.4 This is important because higher income individuals typically have more capital gains, which are prone to greater fluctuations than other types of income. In 2011, the most recent year for which detailed information is available, net capital gains were 7.4 percent of total income for all taxpayers combined, but 46.2 percent of income for taxpayers with more than $10 million in AGI.5 Since 2001, net capital gains annual growth rates in New York State have ranged widely, from positive growth of 73.8 percent in calendar year 2004 to a decline of 54.1 percent in 2008.6 In the three-year period covering calendar years 2007, 2008, and 2009, net capital gains decreased from $116.4 billion to $29.7 billion.7 Assuming the current top tax rate of 8.82 percent, a decline in capital gains of this magnitude would have a revenue impact of almost $7.7 billion per year.

The Adopted Budget financial plan projects continued economic expansion, with New York State personal income growing slightly slower than historic averages and employment increasing slightly more than historic averages.9 Table 1 shows the variability in forecasted growth rates by major tax type: personal income tax and business tax revenues will grow at a compounded average growth rate (CAGR) of 3.4 percent, while other taxes will decline 1.0 percent due to a statutory change in the estate tax. Strong PIT growth is expected despite the expiration of the personal income tax surcharge on high earning taxpayers at the end of 2017 and the middle income tax rate reductions for other taxpayers that will take effect beginning in calendar year 2018. Similarly, sales and other consumption taxes will increase 3.4 percent and business taxes are forecast to grow 3.0 percent, on average.

DOB’s economic forecast is in line with other major forecasting entities, but the current economic expansion will not last forever. Examining the revenue impacts of past recessions can provide a greater understanding of the potential effects of a future recession.

Impacts of a Recession on Future Gaps

Tax revenues decline in economic downturns; however, in response to economic fluctuations, the State can increase tax rates or expand the taxable base to counter the impacts of a recession. Given changes to the State’s tax structure over the years, it is necessary to isolate the economic impacts from any compensatory changes to tax rates or the taxable base. Growth rates that account for these changes are published annually by DOB.10 In the last three recessions (1991, 2001, and 2008), State revenues were negatively impacted over several fiscal years: 1994 to 1997, 2002 to 2005, and 2009 to 2012, respectively.11

By applying growth rates during past recessionary periods to the current financial plan projections and then adjusting for inflation and changes in tax rates and tax bases during the forecast period, the potential impact of a recession can be estimated.12 Table 2 shows the potential impact of a hypothetical recession beginning during state fiscal year 2017 of a similar magnitude as the past three. If a recession of the size and scope of the 2009- 2012 period were to repeat, beginning in fiscal year 2017, the four-year revenue shortfall could reach $59 billion, or 18.2 percent of tax revenues. The average of the three most recent recessions would lead to revenues being approximately $44 billion, or 13.6 percent, lower than projected in the State’s current financial plan.

The State’s 2017 Adopted Financial Plan reports out-year deficits of $2.6 billion, $5.5 billion, and $6.9 billion.13 When adding the impact of the “average” recession to these deficits, the four-year deficit grows to $59 billion, or more than 18 percent of tax revenues anticipated over the next four years.

The potential impact of a recession on State tax revenues could be as high as $59 billion—18 percent of tax revenues over four years.

Table 3: Potential Budget Gaps in a Recession
($ in millions)

Note: Current budget gaps are reported in the Enacted FY2017 Financial Plan, less planned savings that have yet to be identified from staying under the 2 percent cap.

While it is almost impossible to forecast when the next recession will hit or the exact impact on state revenues, the current economic expansion will not continue indefinitely. At some point in the future, the State will enter a recession and tax revenues will decline. Based on the three most recent recessions, the potential cumulative impact on the current financial plan could be between $24 billion and $59 billion, reducing tax revenues between 7 percent and 18 percent over four years.

In the most recent recession, the state decreased spending across a variety of categories including implementation of the Gap Elimination Adjustment to school aid, which was phased out this year after impacting every budget since state fiscal year 2010-2011. The State also increased personal income tax rates on high income earners to offset revenue losses. The current PIT surcharge is set to expire on December 31, 2017 and provides approximately $3 billion in revenue each year.

Compared to New York City or the MTA, the revenue impact of a recession would be considerably more severe on the State owing to the volatility of State revenues. In order to counter the potential impacts of an economic downturn, the State should build its reserves now. According to an analysis released by Moody’s, New York has comparatively small reserves compared to the likely impact a recession would have on revenues, which means tax increases and/or spending cuts would be necessary.14

Predicting the Peak, Preparing for the Trough