The Rational Funding Plan for SUNY and CUNY Should Be Extended

In 2011 New York State adopted a five-year funding plan for the state’s public university systems that had two main provisions: a rational and predictable tuition plan and a maintenance of effort commitment from the State. The SUNY 2020 and CUNY 2020 Program authorized the State University of New York (SUNY) and the City University of New York (CUNY) to raise tuition by up to $300 per year. The State pledged to provide consistent financial support, rather than replace public investment with increased tuition. The additional revenue generated by tuition increases was to be utilized for improving education quality and providing financial assistance to students with limited incomes.1

The Executive Budget extends this successful program for an additional five years, until July 1, 2021.2  The one-house budget bills did not include the extension, but the final budget should.

Prior to this program, tuition increases at SUNY and CUNY were inconsistent. During recessions, state aid was cut, necessitating sudden and significant tuition increases.  As Figure 1 shows, tuition was raised sharply during economic downturns when State revenues were tight, but remained unchanged during periods of economic stability.  In contrast, as Figure 2 shows, tuition increased $300 per year at SUNY and CUNY since SUNY 2020 and CUNY 2020 was adopted, providing students with predictability. In 2015-2016, in-state tuition was $6,330 and $6,470 per academic year at CUNY and SUNY four-year institutions, respectively.  With federal Pell grants and the state Tuition Assistance Program (TAP), these costs are further defrayed; in fact, 70 percent of CUNY students do not pay tuition.3

Since the enactment of this program the State has abided by the commitment to maintain its financial support, providing approximately $1 billion to SUNY and $1.2 billion to CUNY senior colleges annually.4 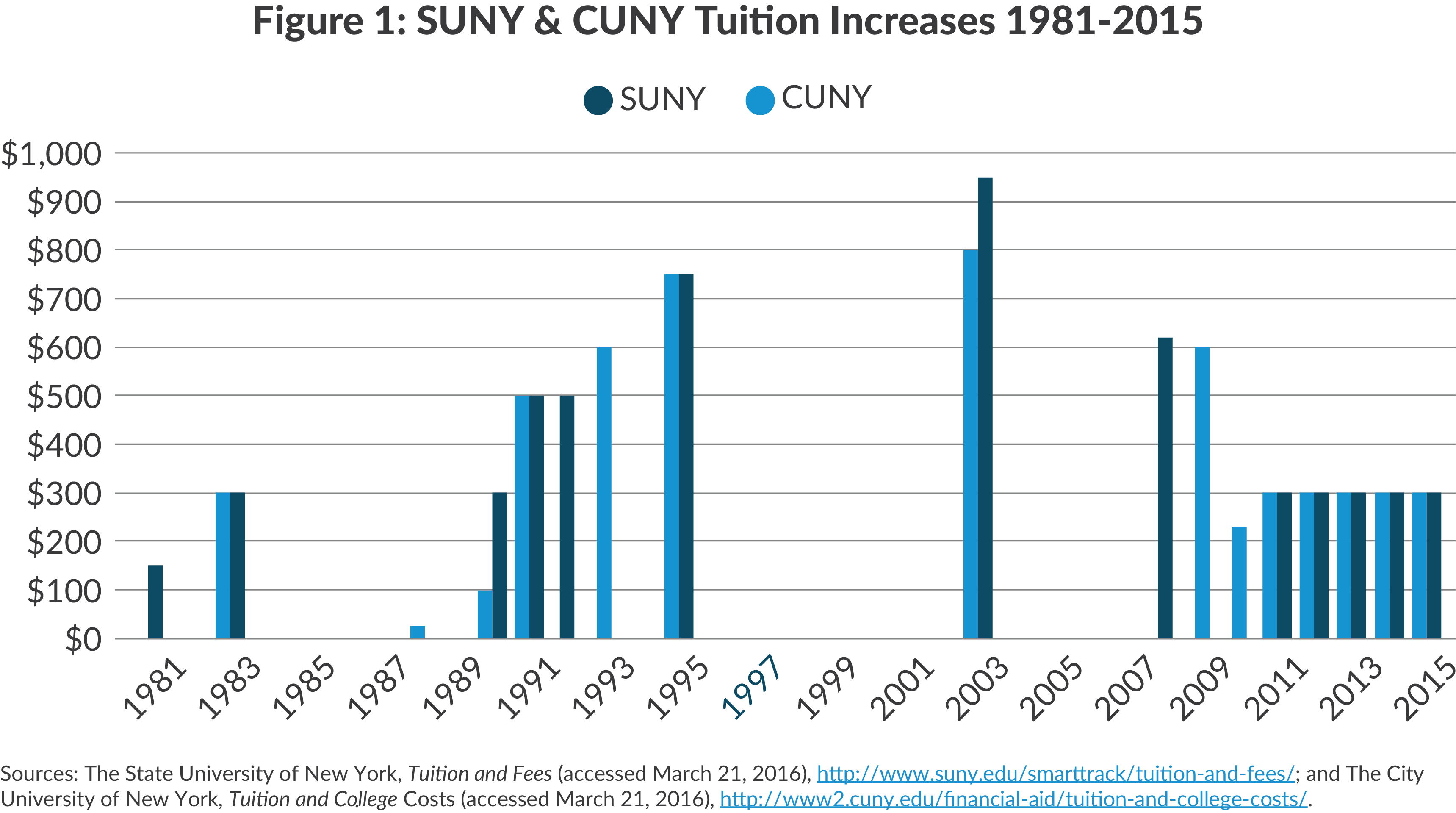 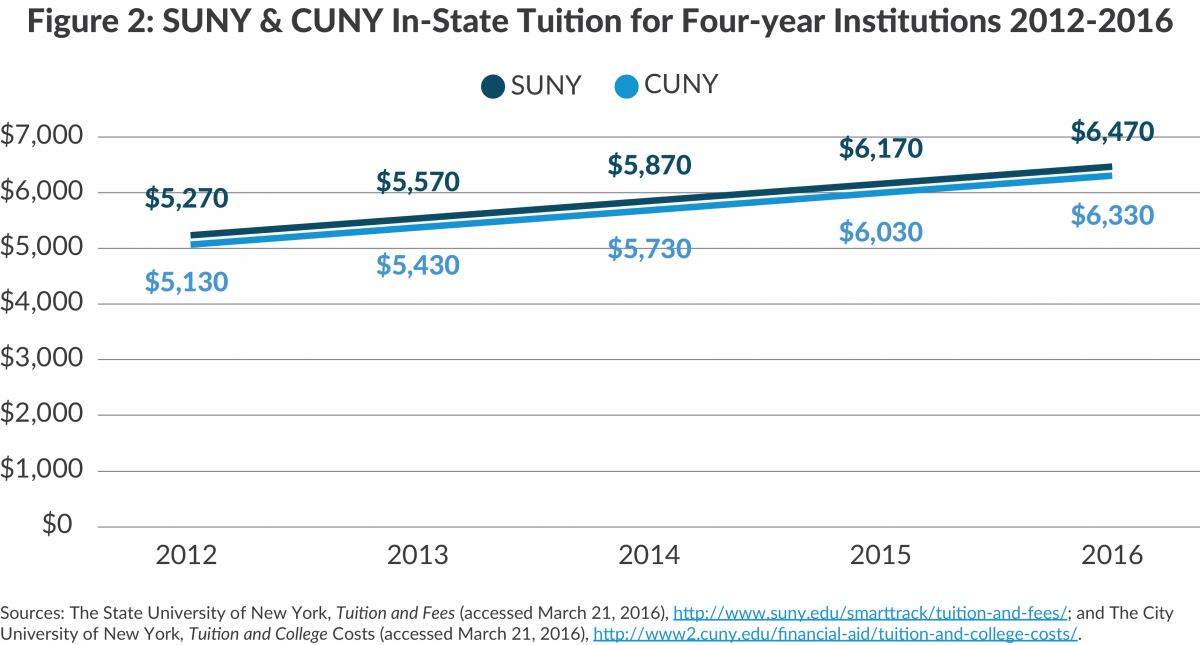 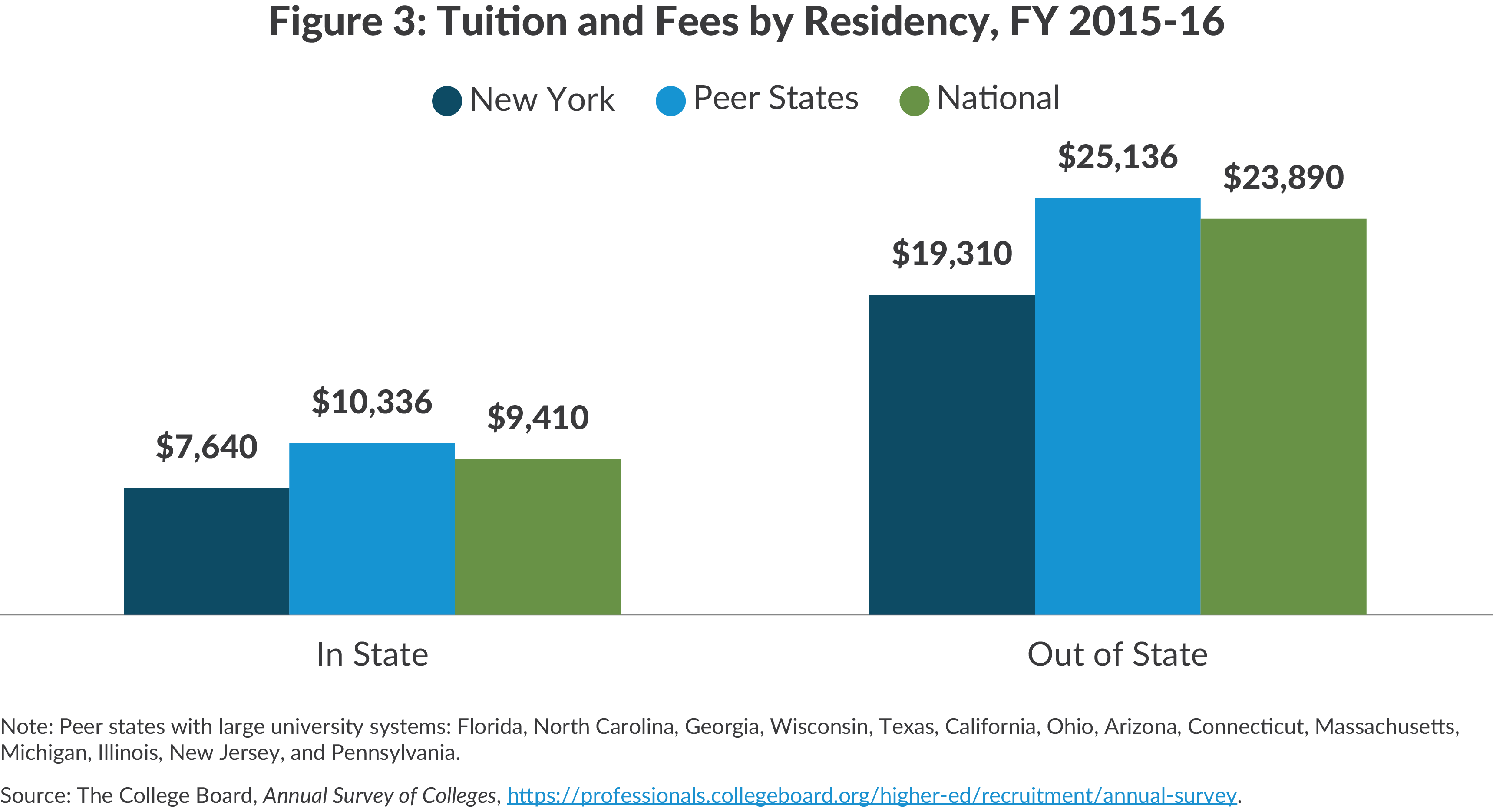 Extending the SUNY 2020 and CUNY 2020 Program for another five years would extend tuition predictability and the state’s requirement to maintain public support, while maintaining New York’s competitive position.9 Failure to do so creates the possibility that SUNY and CUNY students could again be exposed to irrational and unpredictable tuition fluctuations, harming students, SUNY, and CUNY.

By David Friedfel and David Copeland