The Citizens Budget Commission is pleased to announce the winner of its 2012 CBC Prize for Public Service Innovation is the Regional Greenhouse Gas Initiative (RGGI). The Initiative uses an innovative and efficient market-based approach to reduce greenhouse gas emissions; it involves collaboration among multiple states; it has already produced significant results, and it is serving as a model for replication elsewhere in the United States and in Canada.

The main components of RGGI are an overall cap on emissions and quarterly regional auctions of emission allowances to power plants. A nonprofit set up by the participating states handles the auction under the supervision of an independent market monitor. The auction proceeds are then distributed by state and used according to each state’s preferences. New York has chosen to reinvest its auction proceeds into energy and consumer benefit programs. RGGI is the first operational cap and trade system in the nation, and the first cap and trade program to reinvest auction proceeds into energy programs, rather than providing allowances free of charge.

Since the first auction in 2008 to June 2011, an approximated $912 million has been raised by participating states through the auction of emission allowances. New York State sold 136,893,163 allowances for approximately $321.6 million in auction proceeds. With interest, this comes to a total of $322.6 million. Two-thirds of the proceeds have been reinvested in beneficial energy programs (See Table 1). 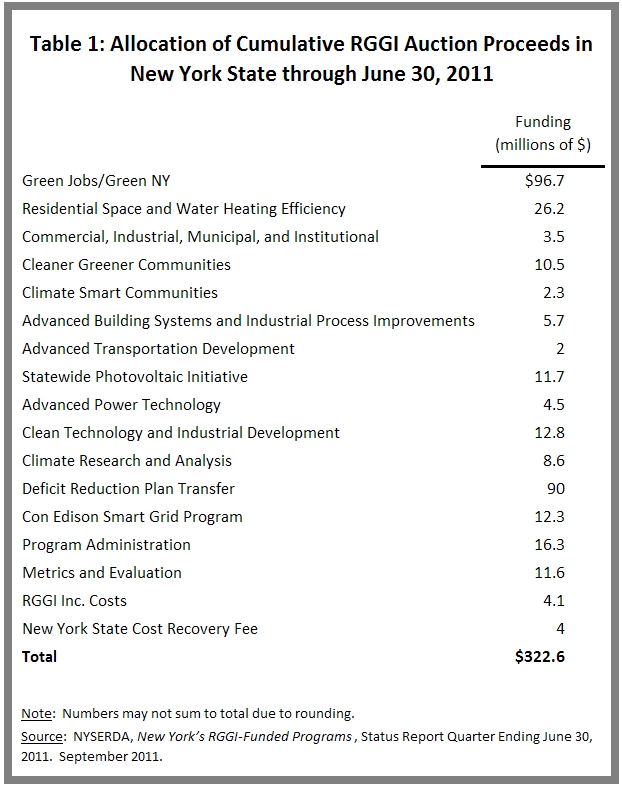 NYSERDA estimates RGGI funding has led to 152,501 annual MMBtu in net energy savings and 15,553 annual tons of carbon dioxide equivalent emissions avoided. A study by the independent Analysis Group found RGGI had a net present benefit of $1.6 billion across the entire region in the first three years, including saving residents $1.3 billion in reduced utility bills, keeping $765 million from leaving the region to pay for energy produced in other states, creating 16,000 job-years, and netting out the increased cost to power plant operators. A total of $912 million has been raised for participating states through the auctions of emission allowances. As RGGI enters year four, and a new phase of the program, an evaluation of how many allowances to sell going forward is underway.RGGI serves as the model for the Western Climate Initiative involving California, Quebec, and Ontario that will begin in 2012 and use a similar cap and trade mechanism. Building on the initial collaboration, the original RGGI states and Pennsylvania and Washington D.C., plan to work together on a Transportation Climate Initiative to reduce emissions in the transportation sector.

Awarded annually, the CBC Prize for Public Service Innovation celebrates creative thinking and shares government achievements with the public and other agencies. In alternating years, it is awarded either to a New York City or a New York State agency. Each year the winner is selected from nominations requested from more than 150 government officials. The nominations are reviewed by CBC staff and a committee composed of CBC Trustees, and that committee of Trustees – co-chaired this year by Alan M. Klein and Justin S. Steinberg – makes the selection. The award will be presented on February 28th at CBC’s 80th Annual Dinner.