In testimony to the New York City Council’s Finance Committee in May 2017, City officials pledged to work with the Council to develop a Capital Commitment Plan that more realistically projects the timing of capital commitments.1 Despite this pledge, the recently released Fiscal Year 2019 Preliminary Budget includes an overly ambitious capital commitment plan that continues to be front-loaded. The practice of front-loading commitments leads to a buildup of appropriated capital funds, as uncommitted funds are rolled forward from one year to the next without a clear indication of when–or if–they will be used.

Rightsizing and right timing the capital plan is necessary for a more effective and more transparent capital planning process. Reducing planned commitments in the early years of the plan to a more attainable level would require the City to clearly articulate its capital priorities and immediate needs. It would also facilitate improved tracking of capital projects and allow for more accurate projections of City borrowing. 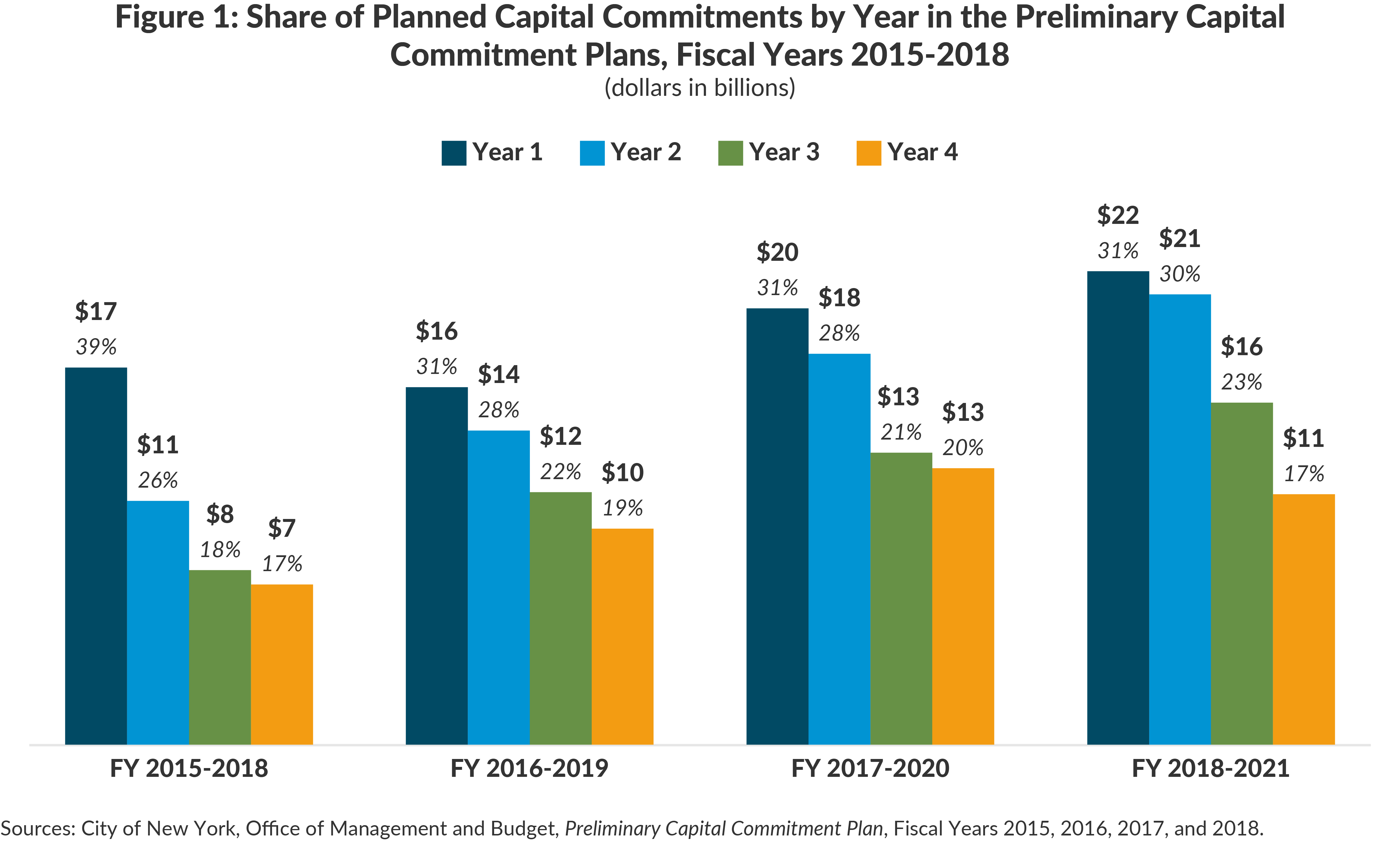 While the City has pledged to project more accurately commitments over the duration of the plan, the Preliminary Capital Commitment Plan for Fiscal Year 2019 mirrors Mayor Bill de Blasio’s previous capital plans. (See Figure 1.) The 2019 plan calls for $69.6 billion in capital commitments from fiscal year 2018 through fiscal year 2021 and remains front-loaded, with $21.7 billion, or 31 percent, planned for the first year, decreasing to $11.5 billion in fiscal year 2021.2 (See Figure 2.)

The plan also remains large. It is $1.7 billion greater than the commitment plan proposed one year ago in January 2017 for fiscal years 2017 to 2020. Even the lowest level of spending projected in the last year of the current capital plan exceeds the actual value of commitments attained in any of the previous four years. 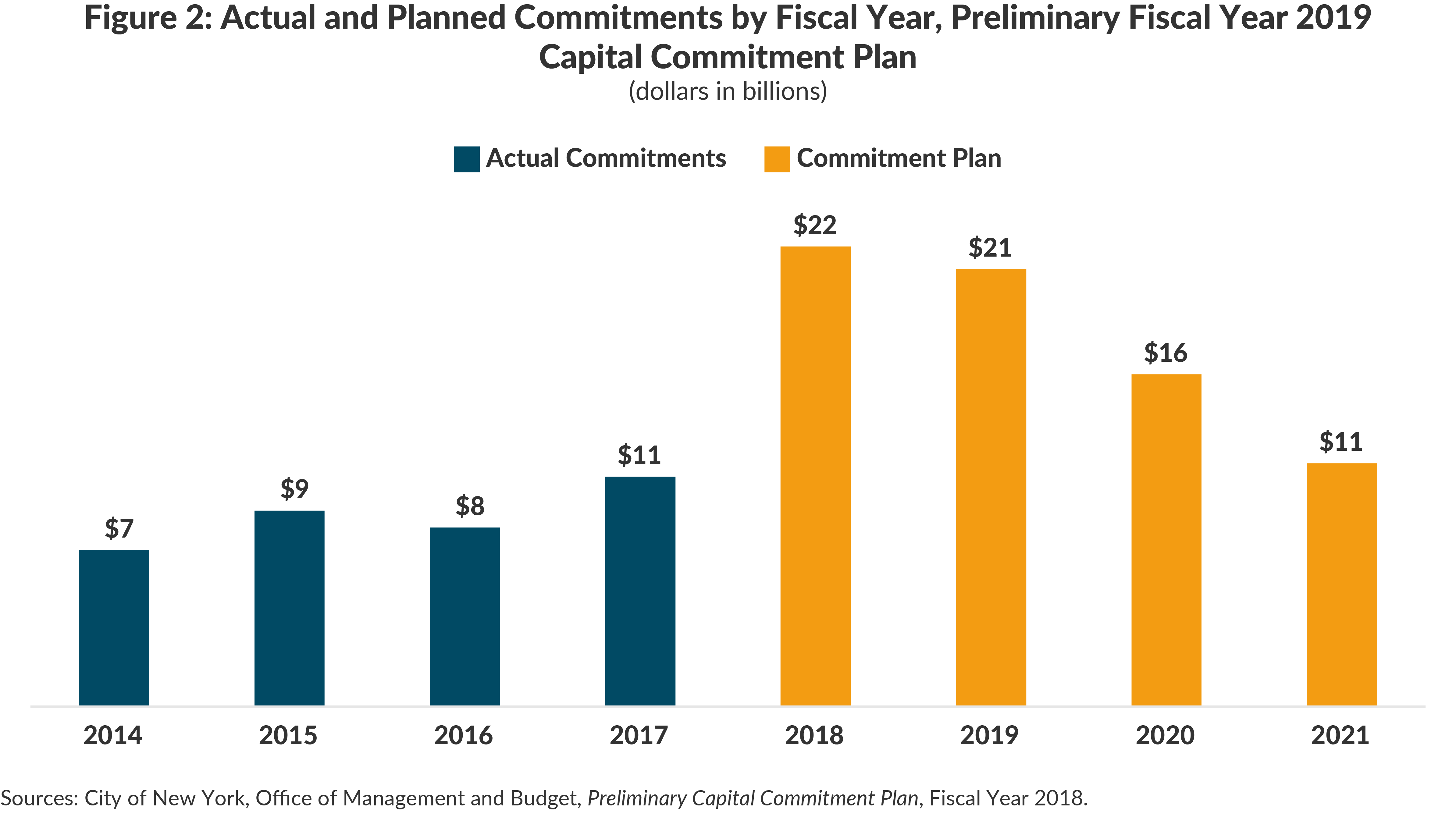 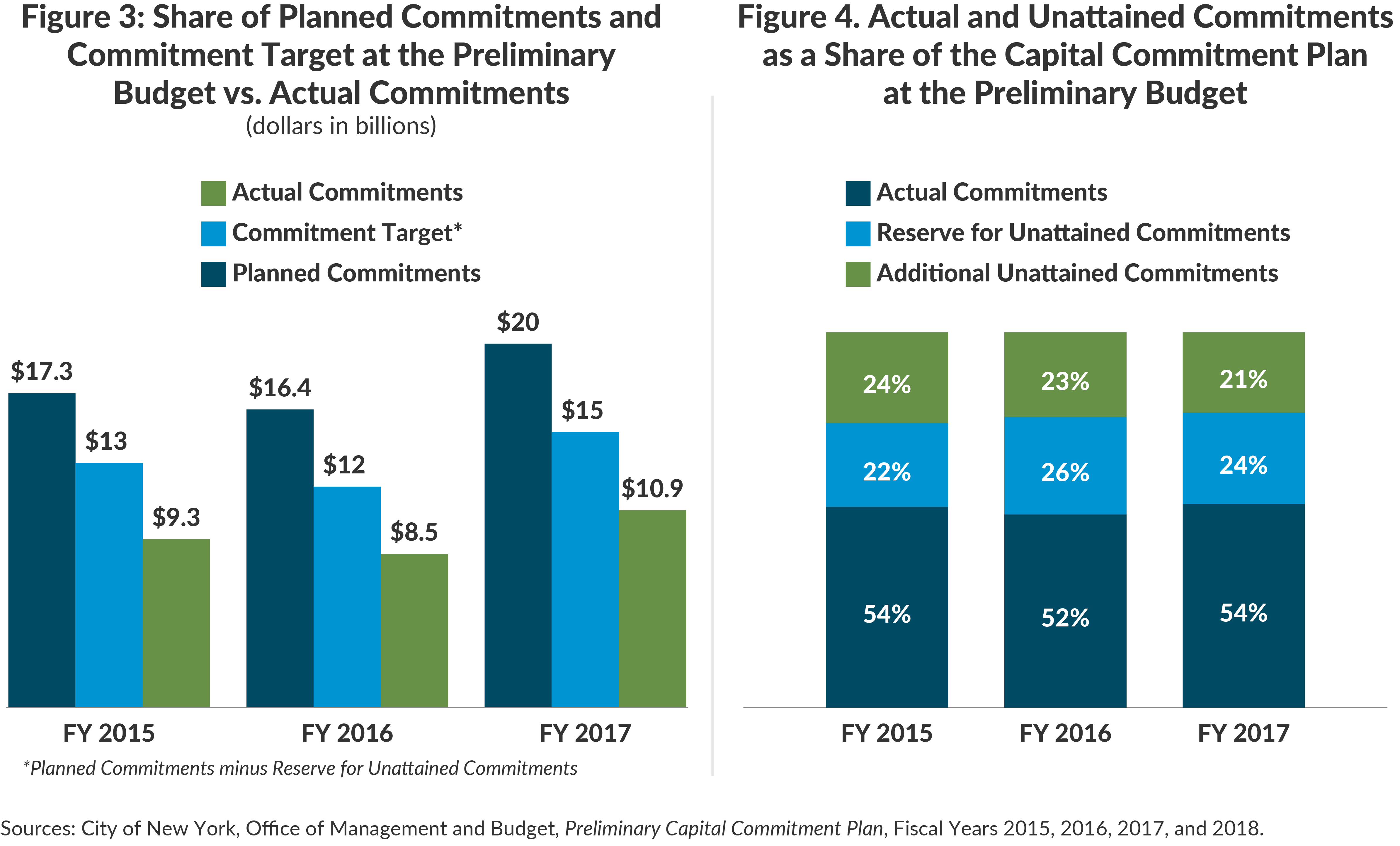 How the City Accounts for Unattained Commitments

The City accounts for delays and cancellations of capital projects by including a “Reserve for Unattained Commitments” in the capital plan. This reserve represents the estimated value of commitments that will not occur on schedule.  The City assumes that each agency–with several exceptions discussed below–will commit a flat percentage of its current-year plan, regardless of the status of the capital projects in their portfolios.3 Overall, this yields what the Office of Management and Budget (OMB) calls a commitment target. In the current Preliminary Capital Commitment Plan, the target for 2018 is $15.7 billion, which leaves a reserve of $6.0 billion, or 28 percent.

Few agencies meet OMB’s annual commitment targets. For example, in fiscal year 2017, most agencies had a target of 66 percent as of the Preliminary Budget. However, the Education, Environmental Protection, and Mass Transit categories were given a target of 100 percent.4 Of the agencies with a 66 percent target, only Sanitation and Housing met their goal. (These figures do not reflect additional planned commitments added to the Housing capital plan at the Executive Budget, most of which went unattained.) While some of the remaining agencies came close to meeting the 66 percent target, many fell well short. The average attainment rate citywide between the Preliminary Budget and the close of the fiscal year was 54 percent, with many agencies committing less than one-third of their 2017 commitment plans. (See Figure 5.)

The inability of agencies to meet their commitment targets suggests that their capital plans are either overly ambitious or fail to reflect actual priorities. This overly ambitious schedule leaves the City vulnerable to taking on more capital projects than it has capacity to manage, which has led in the past to delays and increased costs. A 2017 analysis by the City Council found that more than half of city capital projects with budgets greater than $25 million are behind schedule, over budget, or both.5

Beyond falling short of targets, the current process allows excess appropriations to build up because appropriated funds are often rolled into future years if the commitment does not take place as planned. The City Council appropriates funding for specific budget lines in the capital plan, which in turn gives agencies the authorization to commit funding to specific capital projects. Commitments occur when the City registers a contract for capital spending with the New York City Comptroller. If Council-authorized funding is not committed in a given year, that authorization can be rolled forward into future years. For example, in fiscal year 2017, a large portion of the approximately $9.2 billion in unattained commitments was likely rolled into fiscal year 2018 or later.  The City Council has argued that building up appropriations allows city agencies to amend capital projects or shift funds without City Council approval.6 According to a City Council analysis of the Fiscal Year 2018 Preliminary Capital Commitment Plan, the City planned to commit $17.1 billion in fiscal year 2017, but the level of available appropriations was $30.6 billion.7 In the Fiscal Year 2018 Executive Budget Capital Commitment Plan, the Council rescinded $3.2 billion of these prior appropriations.

The de Blasio Administration’s pledge to work with the Council to more realistically project capital commitments is extremely worthy. The continued front-loading of capital commitments and the projection of an unlikely commitment level indicates that additional work is required to fulfill that pledge.