School Aid in the 2014-15 Executive Budget: An Overview

Governor Andrew Cuomo’s fiscal year 2014-15 Executive Budget proposes to increase total education aid from $21.1 billion to $21.9 billion, a change of $807 million or 3.8 percent from school year 2013-14. Of the total increase $100 million is for universal prekindergarten expansion, $79 million is for unspecified uses, and $25 million funds performance grants for teachers and school districts. (See Table 1.) The remaining aid increase of $603 million is distributed according to established formulas and is included in the district-by-district school aid “runs” generally used to indicate how aid is divided among the school districts. 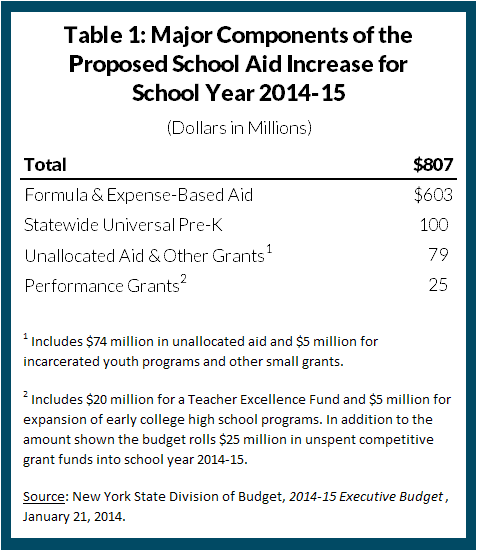 The proposed $603 million addition increases total allocated school aid from $20.7 billion in school year 2013-14 to $21.3 billion in school year 2014-15, a change of 2.9 percent. (See Table 2.) Just over half of the proposed increase, or $323 million, would be general operating aid distributed through formulas tied directly to student need and district ability to pay. The remainder, about $280 million, would be distributed in part by expense-based formulas tied to spending on pupil transportation and capital construction, and in part through categorical grants for supplies such as textbooks and software.  The proposed year-to-year increase for expense-based and categorical aid is 3.9 percent larger than the 2.4 percent proposed increase in need-based formula aid. 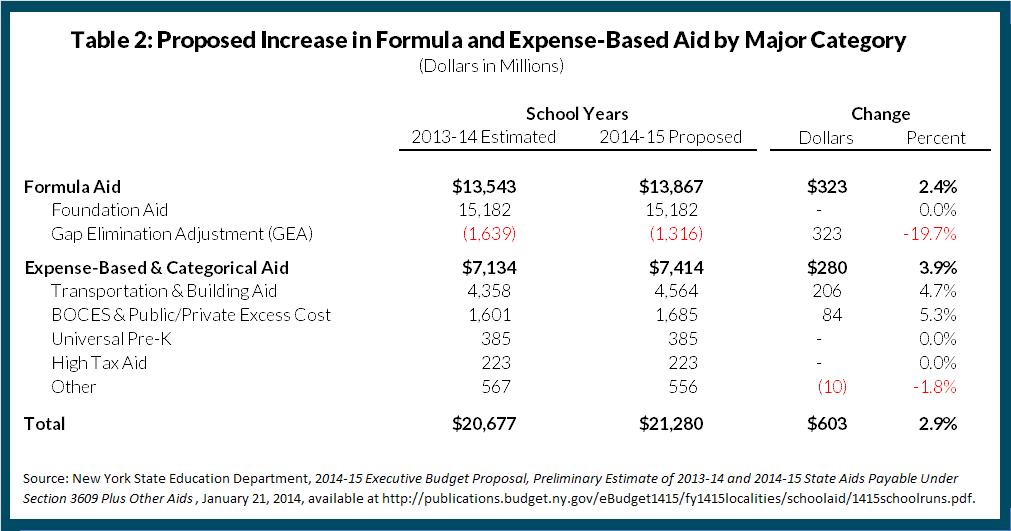 The $323 million increase in formula aid is generated by a reduction in the Gap Elimination Adjustment (GEA), the method used to reduce school aid from its $21.7 billion peak in school year 2009-10. Each district was given a cut in formula aid to meet the State’s gap-closing plans in fiscal years 2010-11 and 2011-12. Since school aid began to grow again in 2012-13 the State has been gradually “repaying” the GEA. Under the Governor’s proposal the GEA would be reduced from -$1.6 billion to -$1.3 billion. In general, school district leaders have pressed the State to increase aid by an amount that fully repays the GEA.

Among expense-based and categorical aids, transportation and building aid are the most significant, comprising $4.6 billion or 21 percent, of total proposed aid in school year 2014-15 and accounting for $206 million of the $280 million increase. Reimbursement for BOCES and the supplemental or “excess” district costs associated with intensive special education placements increases by $84 million; universal Pre-K grants for the existing program are held flat at $385 million. High tax aid, designed to benefit more affluent districts with high school spending, is also held flat at $223 million. All other categorical aid including grants for computer hardware and software, charter school transition, district reorganization and other miscellaneous grants are reduced by $10 million. Affluent districts tend to benefit from expense-based and categorical aid to a greater extent than from foundation or need-based formulas because their spending in these categories is higher.

Education advocates have already begun to press for larger increases than the Governor proposed and in particular for the full elimination of the GEA. If the adopted budget is to limit growth in state operating funds to 2 percent as the Governor intends, then continued fiscal discipline for school districts will be required.