Governor Andrew Cuomo’s proposals to cap property taxes and reduce education aid mean that New York State’s 676 school districts will need to manage with fewer resources; their biggest challenge is to reduce spending without hurting services for the more than 2.7 million public school children. One way to help accomplish this is to change the way taxpayers and school employees share the cost of health insurance premiums.

School districts in New York State, including New York City, spent $4.7 billion on health insurance for employees and retirees in 2009.[1]  These costs have been rising rapidly and will likely continue to do so; over the past decade expenditures for health insurance increased an average of 10 percent annually.[2]  Negotiating increases in premium sharing with school employee unions would provide immediate savings and reduce future costs. Specifically, districts should bring their widely divergent premium-sharing policies into line with those established by New York State for its employees; they pay 10 percent of the premium for single policies and 25 percent for family policies.[3] 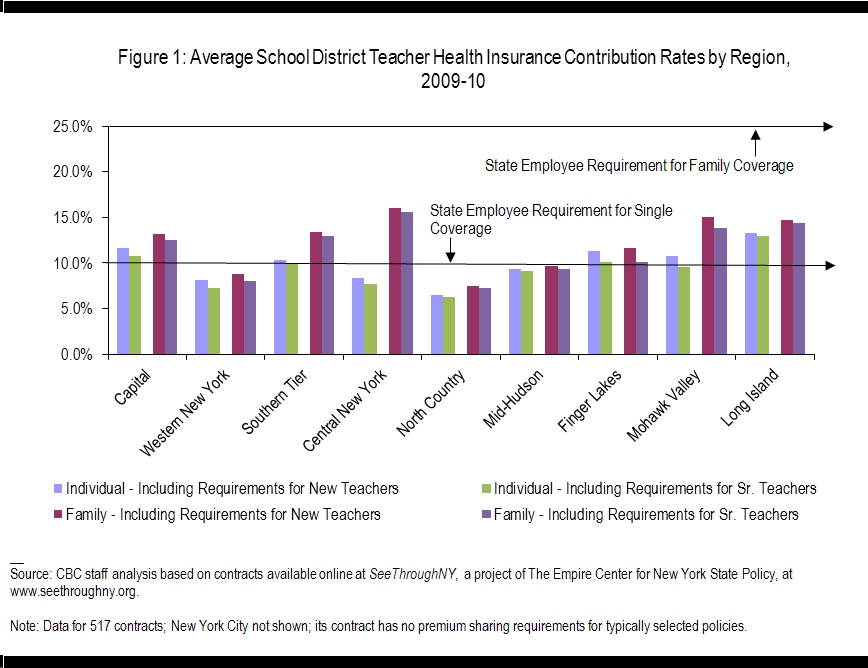 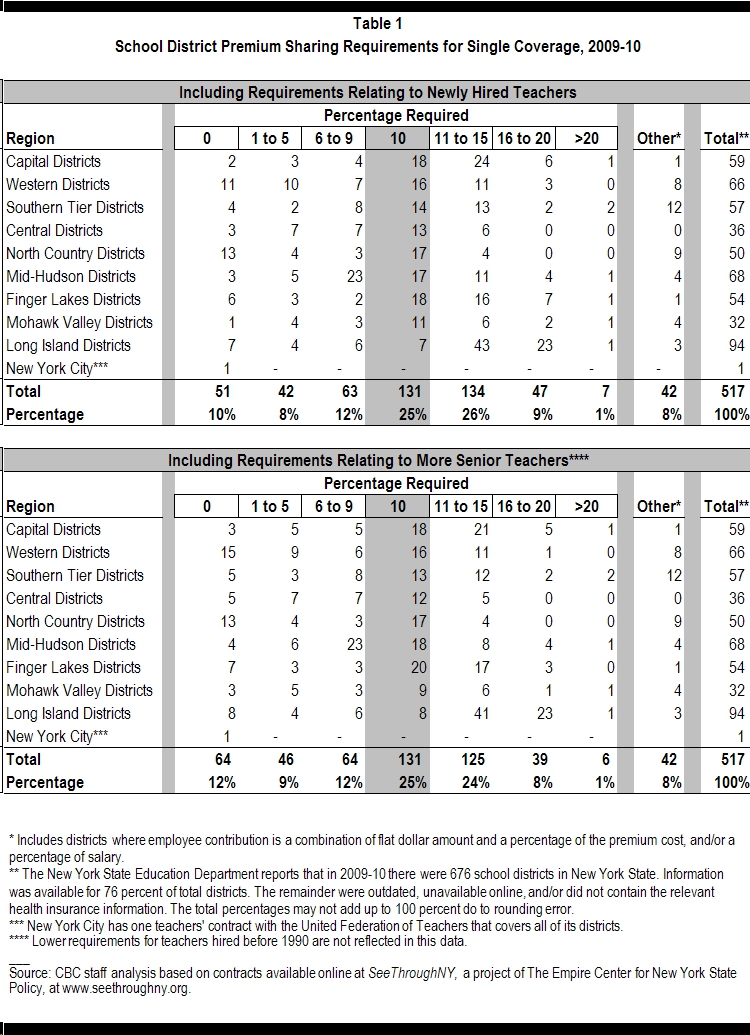 Statewide, the distribution among districts of premium sharing arrangements for family policies is similar to that for single policies. About 22 percent of districts share less than 10 percent, 22 percent require 10 percent, 45 percent require  more than 10 percent, and 8 percent have other types of arrangements. (See Table 2.) However, the vast majority, 88 percent, of districts share a smaller percent of premium costs than the State’s 25 percent. Only 19, or 4 percent, of the 517 districts required premium sharing of 25 percent or more for family coverage.

About 50 districts have premium sharing arrangements for family policies that are more generous for senior teachers. The arrangements in these districts lower the extent of cost sharing among all districts. When those provisions are included in the analysis, 24 percent of districts overall require less than 10 percent premium sharing, compared to 22 percent of districts with this limited sharing for newer hires. A slightly higher percentage (89 versus 88) of all districts share less than the 25 percent required of State employees with more senior teachers’ contract provisions included. 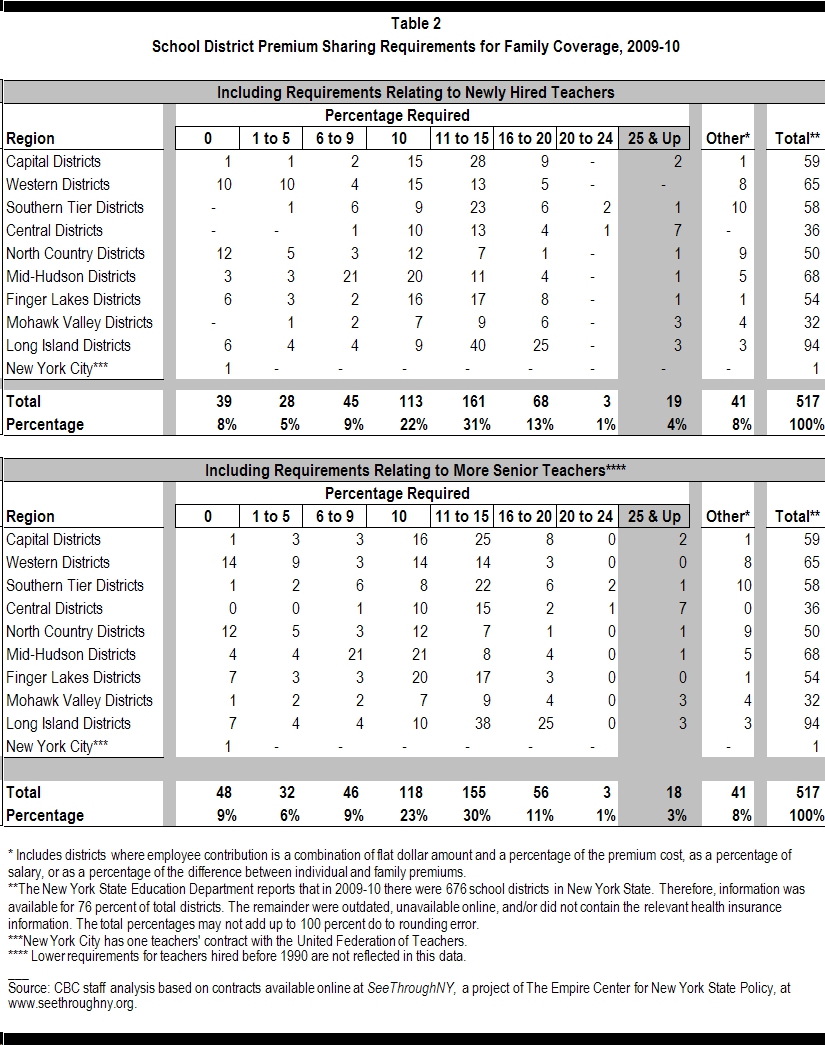 If New York City and school districts across the State changed their health insurance premium sharing arrangements to match those of the State of New York and its employees, the annual savings would exceed $500 million annually including $310 million for the New York City Department of Education (DOE) and at least $220 million for school districts in the rest of the state. For New York City a reasonable estimate of the taxpayers’ annual health insurance premium costs for DOE employees under current arrangements is $1,083 million; retirees cost another $488 million.[4] If the City imposed cost-sharing arrangements for current workers parallel to those established by the State, then the estimated savings for current employees would be $214 million; a similar arrangement for retirees would save $96 million annually for a total of $310 million.[5]

For school districts in the rest of the state, the estimated savings for current employees from new premium sharing arrangements is between $221 million and $246 million annually.[6] Savings from new arrangements for retirees in these districts cannot be estimated accurately because data on current cost-sharing among this group was not collected as part of the CBC staff analysis of contracts. However, it is likely that current school district arrangements for retirees are more generous than the State’s current arrangements (which are the same as for current employees), and substantial additional savings likely are available to school districts by applying the State’s practice to retirees.

School districts in New York State are paying more for employee health insurance than other public sector employers because they are not sharing enough of the costs with their employees and retirees, particularly for family coverage. New York State government employees are required to pay 10 percent and 25 percent for single and family policies, respectively, and the standards are similar for other state and local government employees around the U.S. At this time of fiscal hardship and school aid cuts it is reasonable to seek the same cost sharing for school district employees and retirees as preferable to reducing public school services.