This week the 10 Regional Economic Development Councils (REDCs) created by Governor Andrew Cuomo in 2011 will receive their sixth round of economic development awards. Nearly $4 billion of tax breaks and grants have been awarded through the REDCs to date, and $750 million more is available this year. 1 REDCs created five-year strategic plans in 2011 that laid out priorities and strategies for fostering employment growth, and they now are requesting funding to continue to support industries identified in those plans. Therefore, it is instructive to review how the regional economies have performed in industries targeted for growth.

The results suggest it may be time to for REDCs to rethink their strategies.

REDCs were created to stimulate regional economies by bringing local stakeholders together to develop strategic plans and priorities based on their understanding of regional strengths and needs. To assess their progress, CBC staff analyzed employment data from the Bureau of Labor Statistics’ Quarterly Census of Employment and Wages for calendar years 2010 to 2015, the most recent year for which annual county-level employment figures are available.2 To benchmark performance, the regions are compared to each other, to neighboring states, and to the national average.  Neighboring states are those that share a border with New York: Connecticut, Massachusetts, New Jersey, Pennsylvania, and Vermont. The benchmark is the weighted mean of these states’ change in employment. 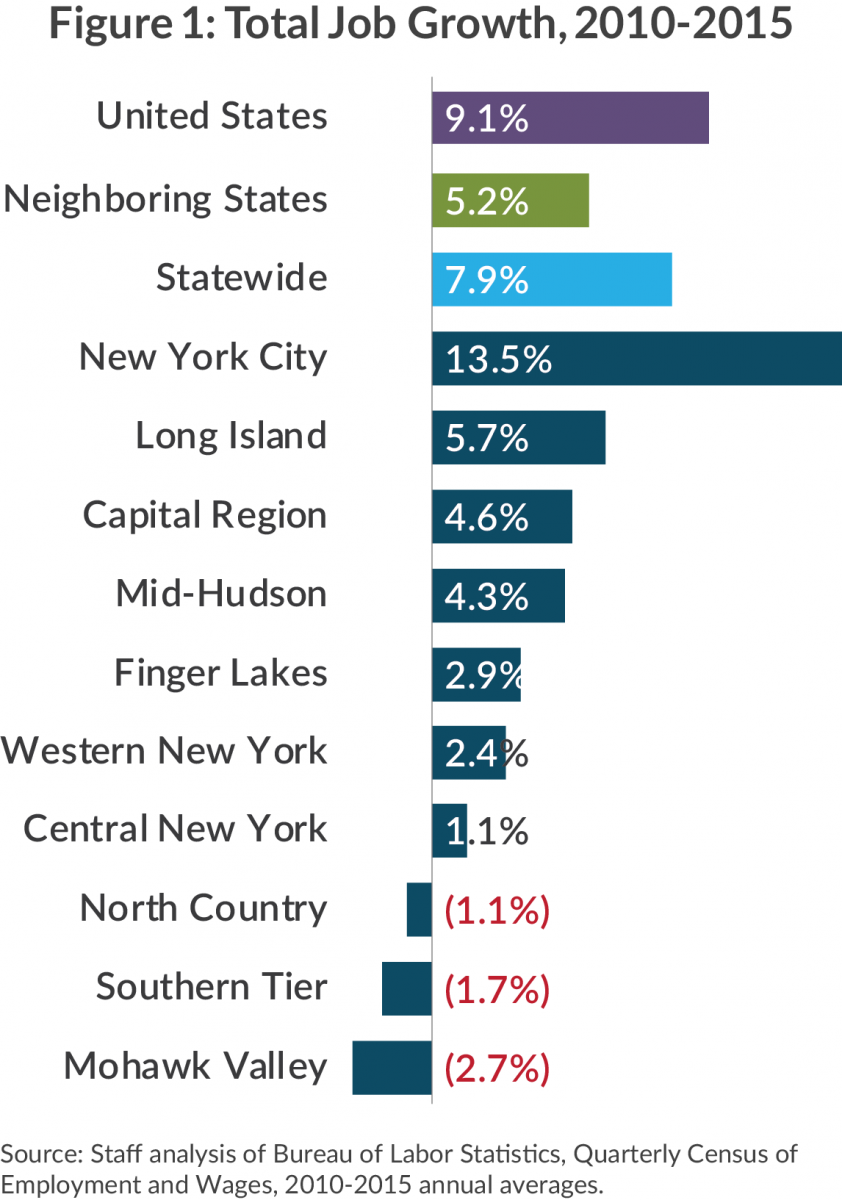 REDCs formulate regional strategies based on local strengths, development potential, and goals.  Despite the variety in regional economies, five industries were consistently emphasized in REDCs plans. In almost all cases, in 2016 the REDCs continued to focus on the industries originally identified in 2011 as part of the strategic plans.3

Performance was mixed in manufacturing and technology, with 6 of 10 regions losing manufacturing jobs and 3 of 8 regions losing tech jobs. Gains were made universally in the other sectors, with strongest gains in tourism and agriculture, two sectors with relatively low average wages.  Our interactive graphic also shows each region’s performance by sector, and we describe performance on the five most focused-on industries below.

Tech jobs are highly paid, with average pay of $120,400 statewide; however, the sector represents only 2.4 percent of jobs statewide.4 Of the 8 REDCs that focused on technology, 3 lost jobs; the other 5 posted gains ranging from 15.2 percent in the Capital Region to 59 percent in New York City.5 Gains in the Capital Region and Long Island lagged the pace nationally and in neighboring states, leaving only 3 regions with rates of growth above the benchmarks. 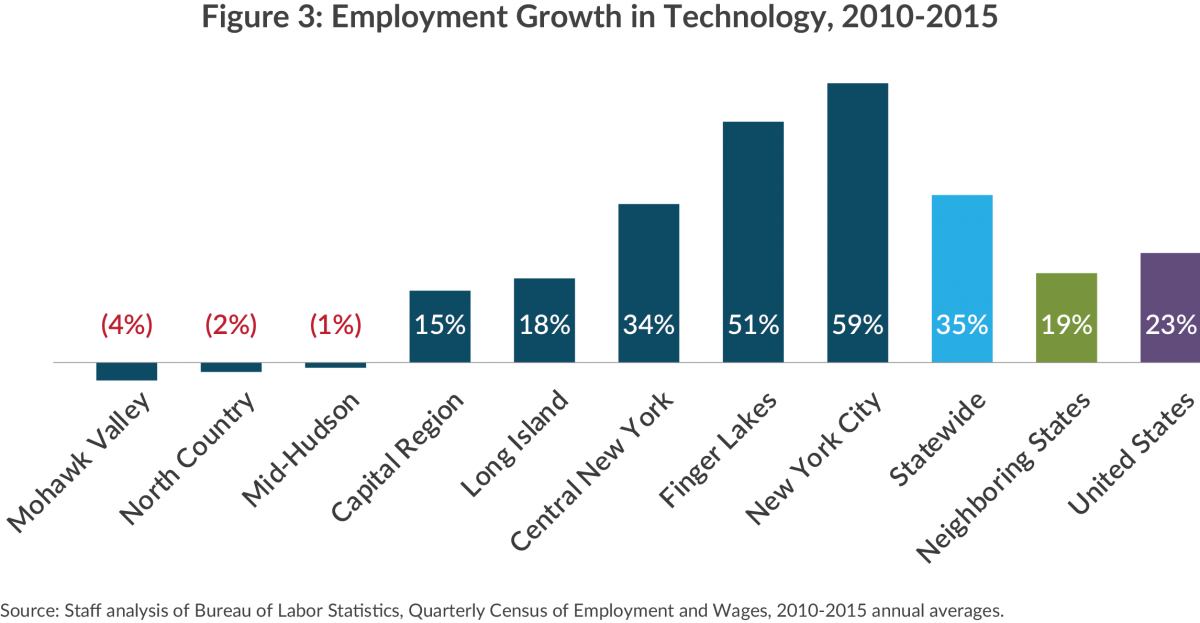 Leisure and hospitality is the fastest-growing sector statewide (13.2 percent) and among the fastest growing in every region.  Employment growth varied from 5.8 percent in the Mohawk Valley to 19.8 percent in Long Island.6 Five of 9 regions outperformed neighboring states (10.3 percent) and 2 outperformed the national average (16.1 percent). Average wages remain the lowest among sectors, providing less than half the regional average wage in each area.7 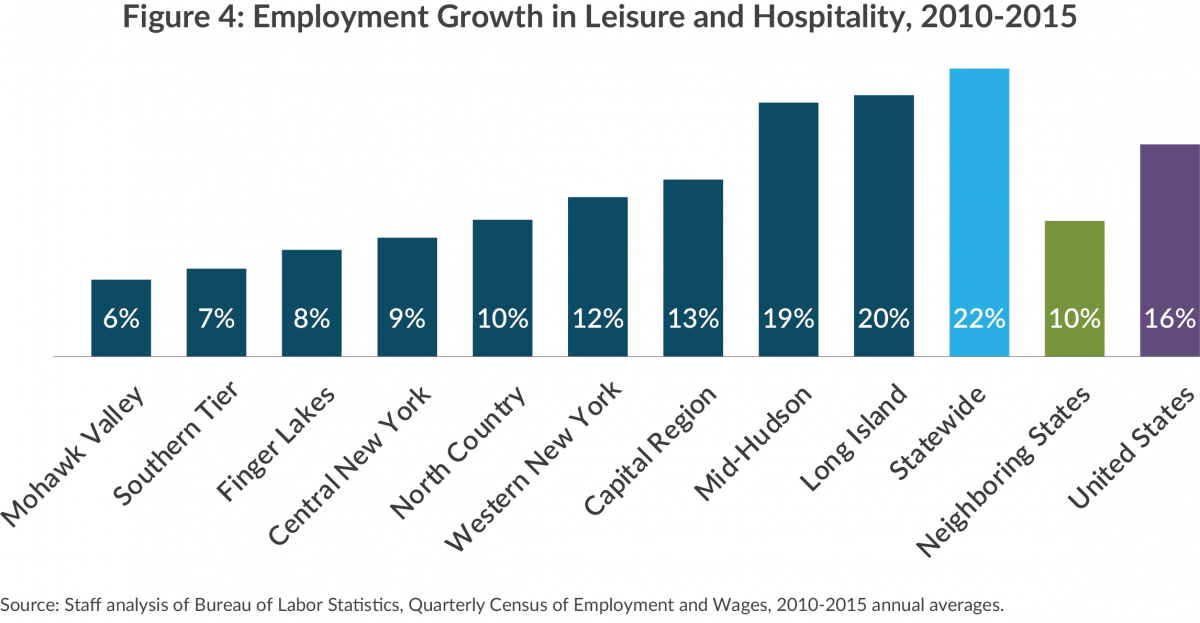 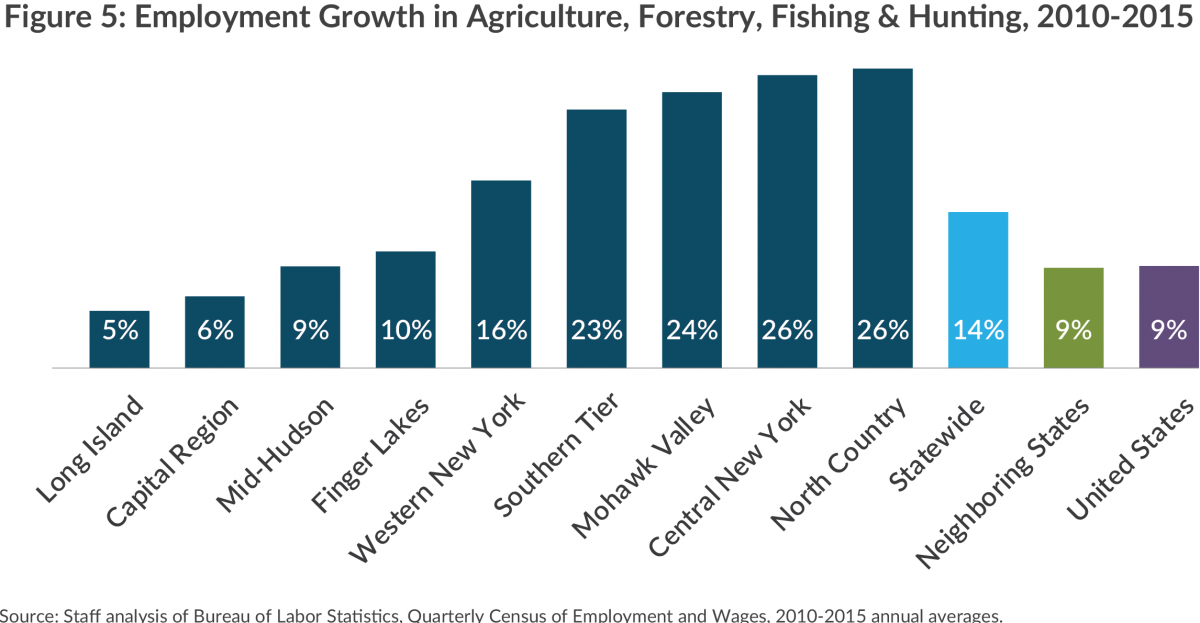 Every region that emphasized the health care sector experienced job growth below the average of neighboring states (10.5 percent) and the nation (13.4 percent). Mid-Hudson (8.2 percent), Long Island (7.7 percent), and Central New York (6.1 percent) experienced the strongest growth, while growth in the Southern Tier was less than 1 percent. 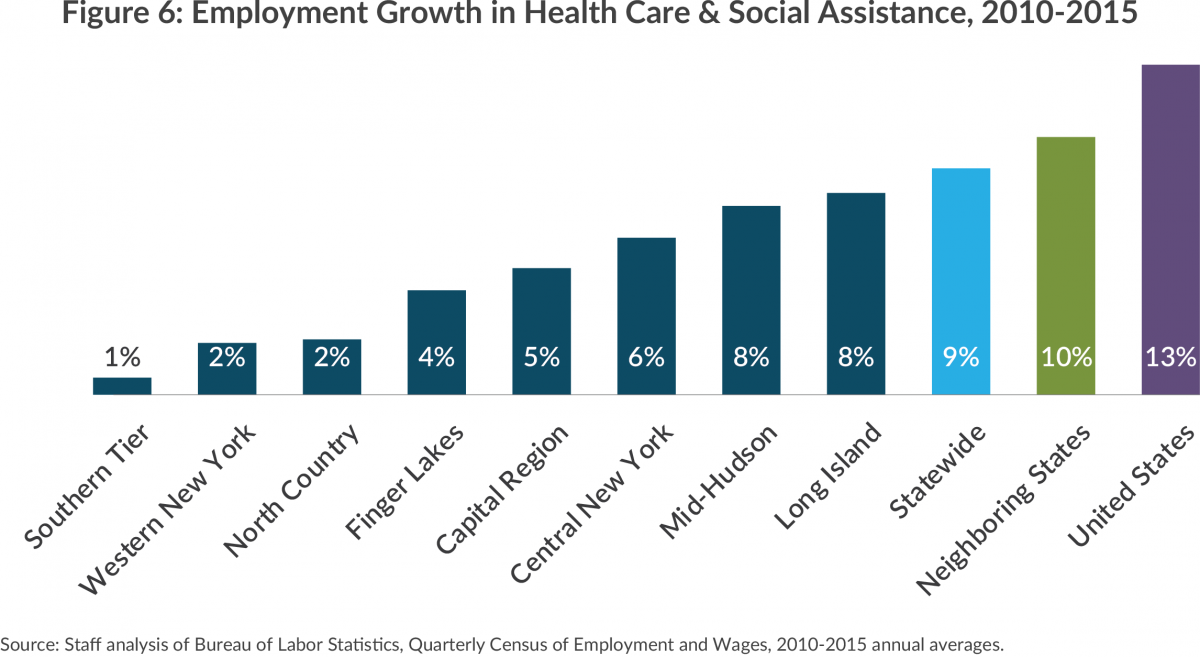 The employment data show regional economies have been most successful in growing health care, tourism, and agriculture industries.  Some regions have also made gains in manufacturing and technology; however, regions that lost employment in these industries continue to target them despite failure to make gains.  Rather than continue to focus resources in this way, the REDCs should reassess their strategic plans and revise them with an eye toward investing in business sectors that are more likely to spur growth.  Indeed, the tepid results also bring grant-based economic development efforts into question; rather than aiding specific businesses or projects, better results may be available through regulatory and tax reform, enhanced career and technical education, or infrastructure investment that benefit employers throughout the region or state.

By Riley Edwards and Maria Doulis