Productivity Not a Done Deal

In January 2020 members of the Metropolitan Transportation Authority’s (MTA’s) largest collective bargaining unit, Transport Workers Union (TWU) Local 100, ratified a new labor contract. The contract, which covers May 16, 2019 to May 15, 2023 and more than 37,000 employees, increases compensation and includes savings initiatives.1 The compounded 9.8 percent wage increases will cost more than $1 billion through 2023, $129 million more than included in the MTA’s November 2020-2023 Financial Plan. In addition, the agreement’s non-wage benefits will cost at least $64 million over four years. Some of these costs will be offset by savings in health benefits and employee availability; however, the net costs of the agreement will add $16.5 million to the MTA’s four-year budget gaps.

If the MTA negotiates similar agreements (and savings) with its other bargaining units, it will cost $11.7 million more than budgeted in the financial plan. To keep the financial plan impact neutral, the agreements should include greater savings, including workrule changes, to offset the impact of these increased costs. In addition, the labor-management productivity committees established in the TWU contract should establish productivity targets and provide public quarterly reports on savings to ensure accountability.

The TWU contract includes four major components: (1) increases to base wages; (2) increases to other pay and benefits; (3) changes intended to generate savings from increased employee availability and health insurance; and (4) a commitment to work on improving productivity (the contract did not include any workrule changes). In sum, the contract will increase the MTA’s four-year fiscal shortfall by $16.5 million; however, the shortfall will be greater if savings fail to materialize.

Increases to Other Pay and Benefits

The contract includes other increases to pay and benefits, whose total costs were not included in the MTA’s reporting. The Citizens Budget Commission (CBC) estimates these benefits add at least 0.5 percent to the 9.8 percent in annual wage increases, for a total cost of 10.3 percent. CBC estimates the four-year costs of these benefits to be at least $64 million, bringing the total four-year agreement cost to $1.1 billion. These changes include:

The contract includes provisions to reduce healthcare utilization and costs and increase employee availability to reduce overtime costs. The MTA estimates these savings total $44 million annually or $176 million over four years. There is risk that these savings will not be realized since they rely upon changes to employee behavior rather than, for example, changes in the MTA’s cost of health insurance premiums.

The MTA estimates health savings of $27 million annually from: increasing emergency room co-pays, which currently range from $0 to $50, to $100 to encourage greater use of primary and urgent care providers; instituting nationwide in-network coverage; and adjusting prescription drug co-pays to encourage use of generic options.14 Generic drug co-pays will be $0 while brand name drugs will be $20 and non-formulary drugs will be $40; current co-pays for brand-name drugs range from $10-15.15 The MTA assumes that these changes will result in health cost savings of $730 per TWU employee; however, there is a risk that employees will not change their behavior in response to the new costs as much as expected.

The contract also will allow employees voluntarily to swap shifts; employees who swap shifts will be paid their hourly rates, which generates savings because the MTA will not need to cover the shifts on overtime. The MTA assumes this will reduce annual overtime costs by $17 million, predicated on a minimum one and a half day improvement in employee availability.16 The union and the MTA will share in savings above one day in availability. The MTA assumes average annual availability savings of $459 per TWU employee; however, the savings are predicated on changes in behavior of employees who forego opportunities to earn overtime. The estimate also does not account for employees taking advantage of the Paid Family Medical Leave Program. The number of shifts that would need to be filled if 1.6 percent of workers take advantage of Paid Family Medical Leave would offset more than half of the proposed availability savings of 55,500 days for 37,000 employees.17

If the MTA manages to fully realize these savings, it will save $44 million annually; in the short term, this will be sufficient to cover the cost of wage and other compensation increases. Over the course of the four-year financial plan, however, the budget gap will increase by $16.5 million. 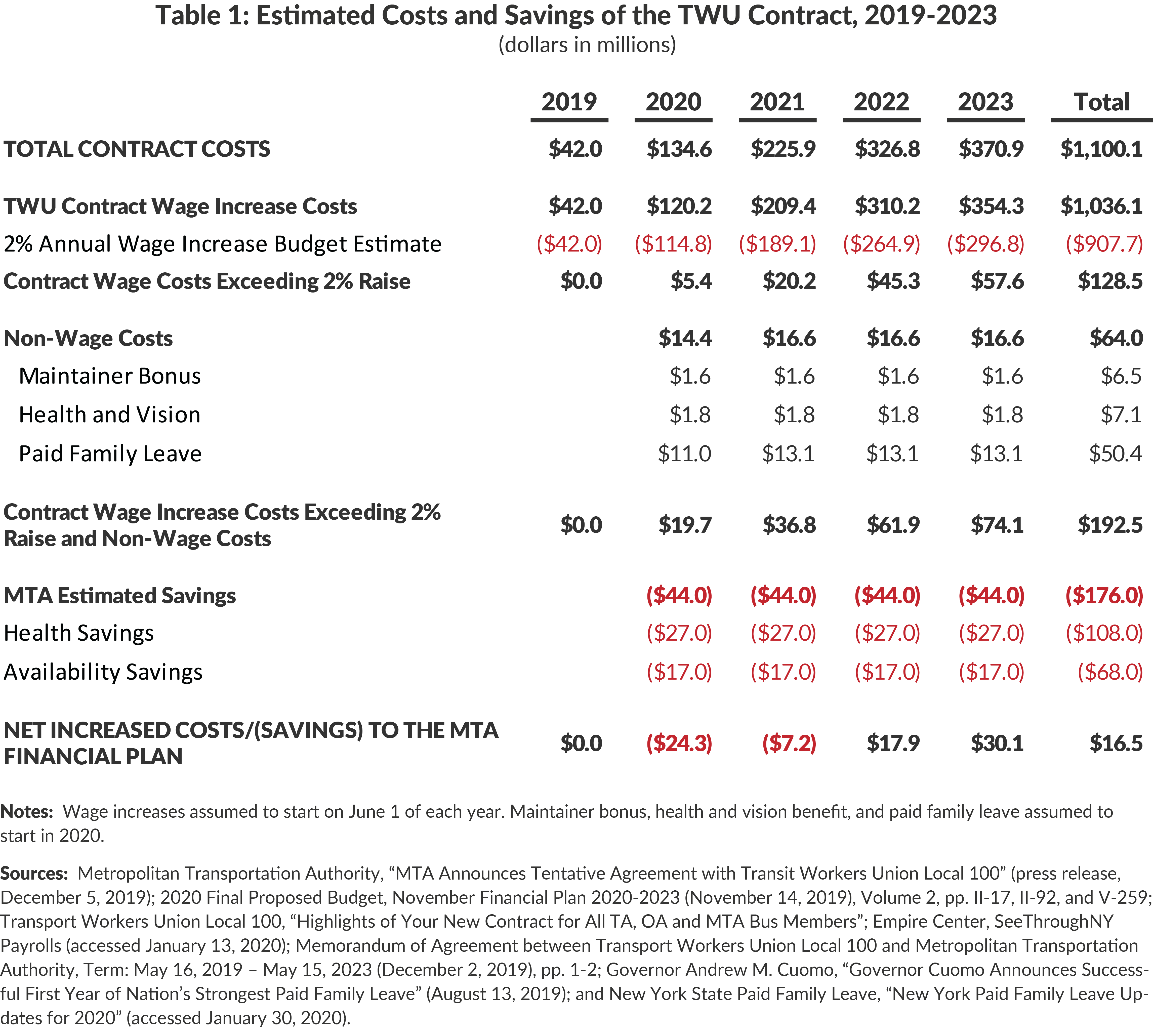 The MTA employs approximately 24,000 workers represented by unions other than the TWU.20 The TWU contract typically establishes the “pattern” for the other unions. If these workers’ bargaining agreements follow the TWU wage pattern, they will cost the MTA $735 million from 2019 to 2023. Additional nonwage benefits similar to those in the TWU contract would cost an additional $45.4 million over the four years. In sum, this would be $136.5 million more than the $643.9 million that the financial plan assumes for a 2 percent raise.21 (See Table 2.)

If the MTA can achieve savings comparable to the TWU agreement, it could save $31.2 million annually, for a total of $124.9 million of savings from 2020 to 2023. This would result in $11.7 million of additional costs over the financial plan period. However, if savings are of a similar nature to those negotiated with the TWU, they may suffer from the same risk of falling short if employee behavior is not sufficiently changed.

A Note on Nonrepresented Employees

The MTA also employs approximately 13,250 nonrepresented employees, who follow a different wage and benefit increase process.22 Increase for these employees have not always followed the TWU pattern; for example, they have had wages frozen or received less than the TWU patter.23 The MTA currently assumes 2 percent wage increases for these employees in line with prior increases for this workforce.24 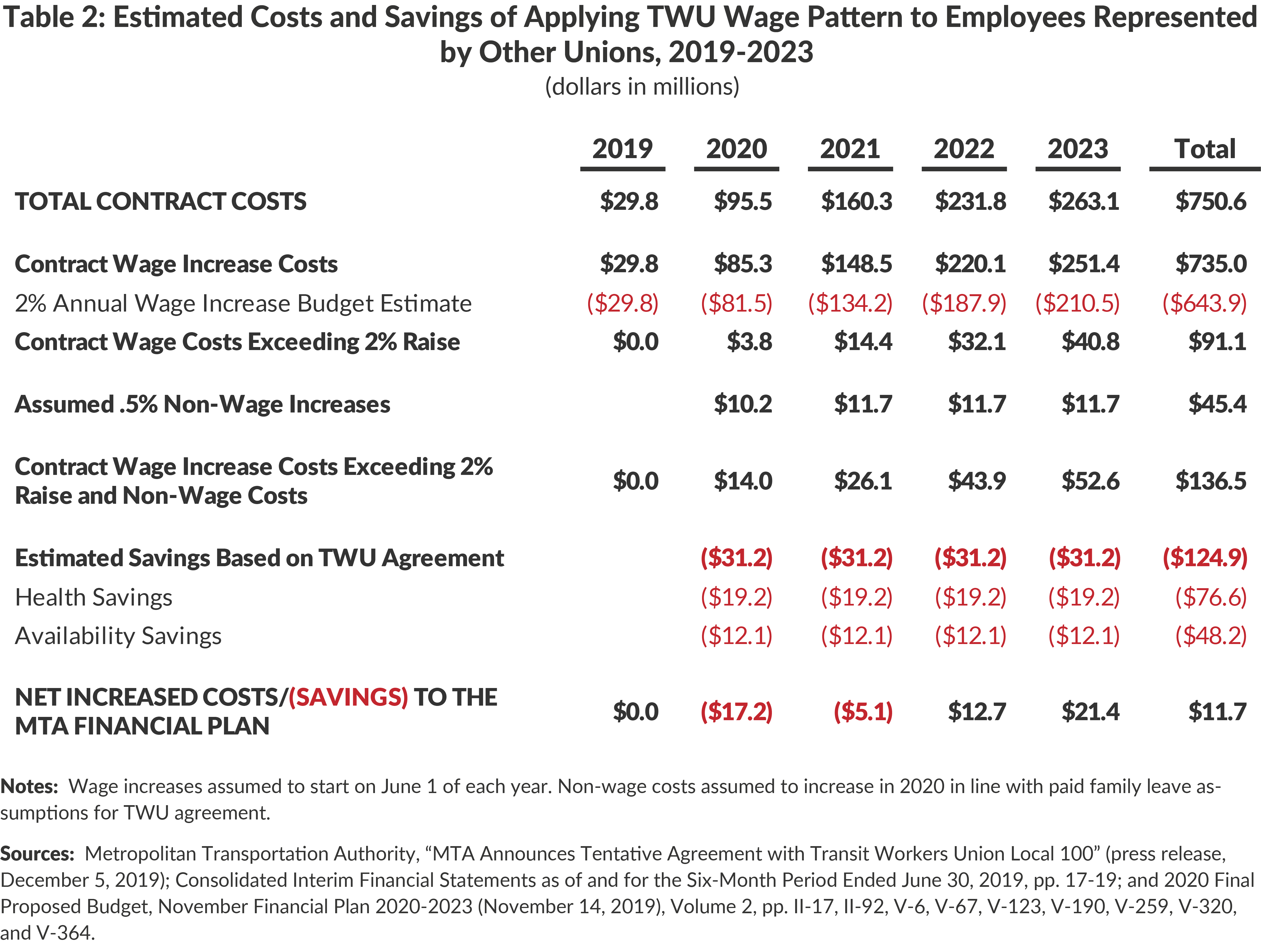 The TWU bargaining agreement increases costs more than assumed in the financial plan, but includes savings that may, if realized, offset most of the increased costs. There is a real risk, however, that these savings will not be realized, which would increase the MTA’s projected $638 million four-year shortfall even more. This risk is compounded by the extension of the pattern to other unionized workers.

While these agreements may not have a significant deleterious effect if all the savings are realized, the MTA did not realize the opportunity to provide “net-zero” wage increases, where productivity would have offset the cost of all raises. Had it done so, the MTA could have significantly curtailed its outyear budget gaps. It should not miss the opportunity to include workrule changes in other collective bargaining agreements.

The MTA has taken a step in the right direction by including productivity committees in the new TWU contract. The MTA should establish productivity targets and provide public quarterly reports on savings to ensure accountability, and similar committees should be established with other unions if workrule changes are not directly negotiated in the other collective bargaining agreements.