Governor Andrew Cuomo will convene a summit of New York’s higher education and political leaders soon to consider a proposal from the State University of New York (SUNY) at Buffalo to give that university greater autonomy with respect to its tuition policies and control over physical assets. The proposal deserves support, but not just for SUNY at Buffalo; all public higher education institutions in New York should be given the same authority.

In fact, the Public Higher Education Empowerment and Innovation Act, proposed by Governor David Paterson as part of his Executive Budget for fiscal year 2010-11, would have given the autonomy proposed for SUNY at Buffalo to all SUNY and City University of New York (CUNY) institutions. The Citizens Budget Commission supported the Empowerment Act last year,[1] but the Legislature did not include the measure as part of the approved budget. Governor Cuomo’s Executive Budget did not include the changes in tuition policy proposed by Paterson, but did include the greater autonomy for colleges in purchasing and in managing capital assets. Only the purchasing provisions were approved by the Legislature as part of the adopted budget.

Tuition - The Heart of the Matter

While enhancements in public colleges’ ability to manage their physical assets and use public-private partnerships to construct facilities are important positive steps, the key issue to be addressed at the summit is tuition policy. Currently the state legislature has de facto control over tuition rates, and this leads to two serious problems. First, erratic and sharp tuition increases coincide with periods of hard economic times. The Legislature has been reluctant to increase tuition in good times, and then imposes large increases in tight budget times. From the students’ perspective this means some face double-digit tuition increases at times when they can least afford it, while others finish their degrees without experiencing any change in tuition. The second problem is that tuition revenue is used to replace general fund subsidies and not to improve the quality of higher education. The Legislature demonstrated its willingness to divert tuition revenue in this year’s budget cycle; it refused to appropriate $40 million of CUNY tuition revenue stemming from a 5 percent tuition increase that was approved by the university’s Board of Trustees, but not by the Legislature.

Allowing the universities to raise tuition without legislative approval is likely to lead to more regular tuition hikes. But the increments would be more modest and predictable than those set by the Legislature,[2] and the increases would not make SUNY and CUNY comparatively expensive. Currently SUNY and CUNY tuition is relatively low. In 2010-11, average tuition and fees for resident undergraduate students charged by New York's four-year public colleges and universities was $5,790, nearly a quarter below the national average of $7,605, and half the amount charged in neighboring New Jersey. (See Figure 1.) Among the 14 peer states with large public education systems, New York’s four-year public schools charge the third lowest tuition and fees behind only North Carolina and Florida. 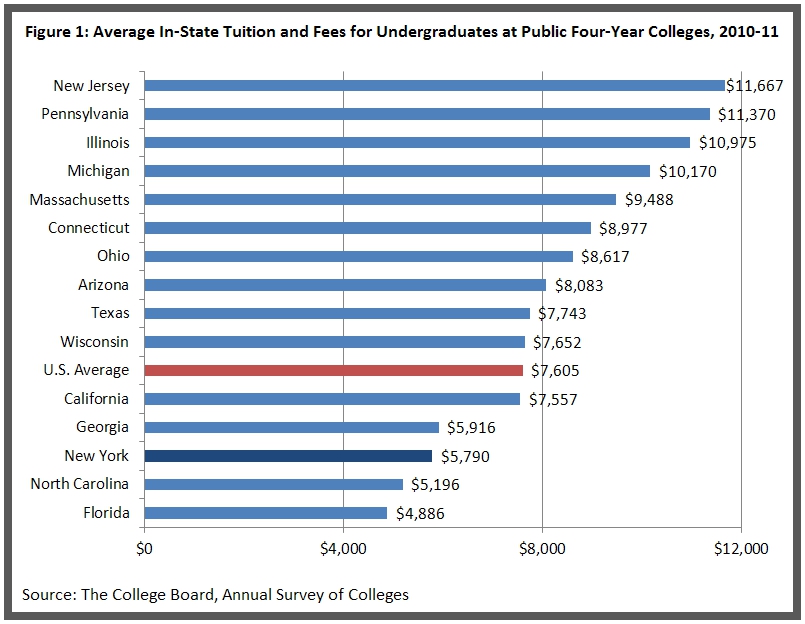 It is also desirable to allow SUNY and CUNY to set differential tuition among campuses and programs. Currently, variation is permitted only between senior and community colleges within each system, and between graduate and undergraduate programs at each system's senior colleges. Differential tuition would enable the universities to recognize variation in costs among programs and campuses, and to maximize tuition revenue by taking into account demand for programs and regional costs. The current uniform tuition policy is perhaps the main reason why New York’s public system lacks flagship schools and programs, in stark contrast to many of its peers.

SUNY at Buffalo wants to be a flagship public school in New York, and it is often treated as such in national rankings. Compared to other public flagships, average in-state tuition and fees for SUNY at Buffalo undergraduates were more than $1,000 below the national average and the fourth lowest among the flagship campuses in the 14 peer states. (See Figure 2.) 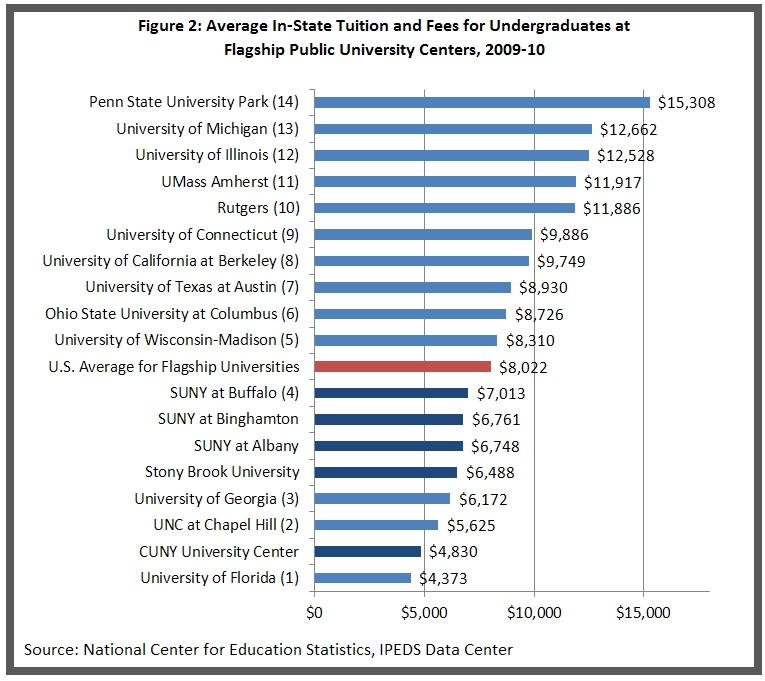 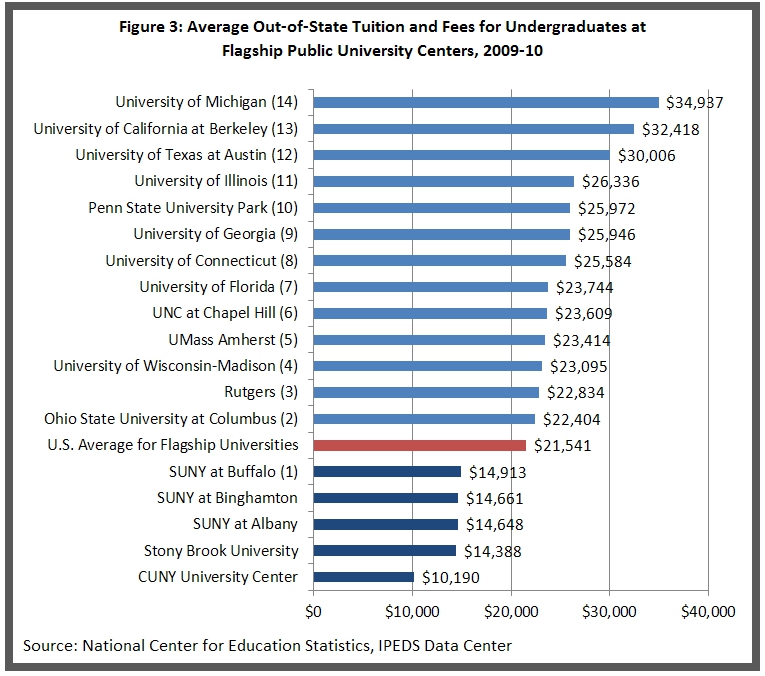 The main concern with the proposed tuition policy changes is that they would lead to tuition increases that could limit access for low-income students. This concern is especially salient for students in two-year community colleges. In contrast with New York’s public senior colleges, tuition and fees at SUNY's and CUNY's two-year community colleges are relatively high in a national context. New York’s in-state tuition and fees at community colleges in 2010-11 were the third highest among peer states, and $1,252 above the national average (See Figure 4.) 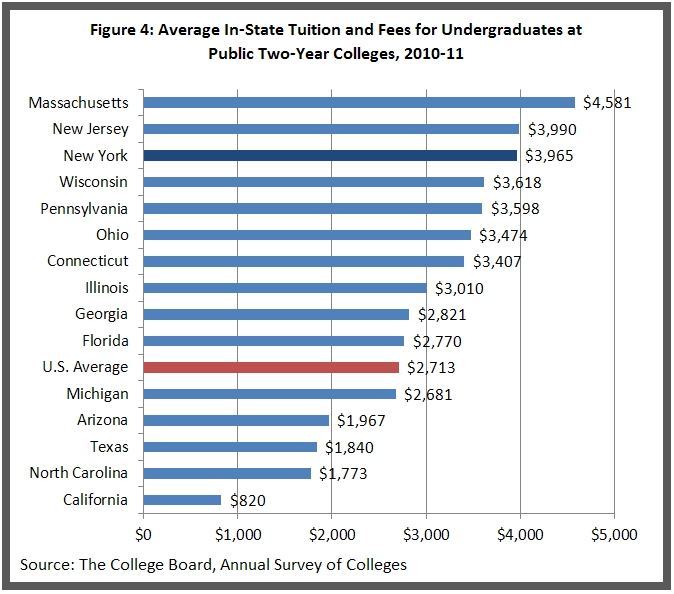 The impact of higher and differential tuition on affordability and student choice of schools for needy students should be mitigated through financial aid. Low-income SUNY and CUNY students already receive considerable aid in paying tuition through New York's Tuition Assistance Program (TAP), one of the largest and most generous financial aid programs in the nation. TAP would likely have to become even larger under the new tuition policy outlined above.

In contrast, the last two enacted budgets have reduced TAP from $5,000 to $4,000 for students in 2-year colleges. In addition, graduate students will not be eligible to receive TAP, and eligibility standards will be tighter in terms of academic standing and financial means. This trend should be reversed if state leaders implement the policy changes necessary for a more rational system of funding public higher education in New York.

The upcoming summit at the State Capitol will bring SUNY at Buffalo one step closer to that goal. But it should be only the first in a series of steps to establish a more rational tuition policy and greater regulatory freedom for New York’s entire system of public higher education. Every campus deserves what is now being considered only for Buffalo.

[2] The original proposal included an annual cap on increases of up to two-and-one-half times the five-year rolling average of the Higher Education Price Index (HEPI); the SUNY at Buffalo proposal sets the annual cap at one-and-a-half times HEPI.