New York State’s transportation assets are vast, including 115,000 centerline miles of roads, 17,000 bridges, 3,400 railroad miles, and 136 public airports. The New York State Department of Transportation (DOT) is responsible for maintenance and construction on and around a substantial portion of this infrastructure.1 With disbursements in excess of $4.9 billion annually, DOT’s are the largest capital expenses for the State of New York each year, representing 36 percent of projected capital spending by New York State agencies.2 The importance, scope, and size of DOT’s capital investments make it essential that these investments are guided by a strong capital planning process. The most recent capital program, cobbled together by the State, covers a five-year period, fiscal years 2016 through 2020. A review of how this plan was created and implemented indicates the State did not follow best practices, and procedural improvements should be made to ensure that resources are targeted toward the greatest needs and in line with a broader strategy.

Each of the capital planning steps should inform the next and should yield a capital plan that is aligned with the State’s goals, needs, and resources and that maintains accessibility and quality of vital infrastructure over the long term.3(See Figure 1.)

Establishing Priorities and Goals as Part of a Strategic Planning Process

The capital planning process should begin with a vision for New York’s transportation assets, and that vision should be linked to measurable, achievable goals for the transportation system. In recent years, the State has authored a few disjointed documents, which do not offer a holistic structure or strategy for transportation capital planning. The State’s capital priorities were broadly outlined most recently in the NY Works plan, compiled in 2013. The NY Works plan briefly describes the State’s intent to maintain safety and efficiency while also broadly linking all transportation assets to economic and community development, but it served as more of a compilation of anticipated spending by statewide agencies and public authorities than a strategic document establishing criteria and goals for infrastructure projects.4

DOT’s last strategic planning document, “Strategies for a New Age: New York State’s Transportation Master Plan for 2030,” was published in 2006. That document set five main themes for DOT capital investments: Mobility and Reliability, Safety, Security, Environmental Sustainability, and Economic Competitiveness. For each theme, issues and strategies were identified in order to plan strategically for achieving the goals of the plan.5 The 2006 strategic plan is now over a decade old and has not been revised or updated. Since it was authored, major adverse weather events have occurred, economic development strategies have shifted, and demographics have evolved. Additionally, the goals set forth in this document were not tied to performance metrics and targets for specific assets.

In 2009, DOT published the 2010-2015 “Capital Program Proposal,” which included specific goals to reconstruct 1,300 miles of State roads, repave another 1,600 miles, and rehabilitate more than 900 bridges. It was compelled by one-time State statutory provisions, which have not been reproduced since.6 The 2010-2015 Proposal effectively described the State’s assets and strategies, while also outlining specific performance measures and the metrics by which goals would be evaluated; however,  the report was superseded by a memorandum of understanding (MOU) negotiated between elected officials for fiscal years 2014 and 2015, and the MOU process was also used for the most recent five-year period from fiscal years 2016 to 2020.7

The State has detailed strategies, which are outlined in the drafted Transportation Asset Management Plan (TAMP), for proceeding with work on transportation assets.  Within the TAMP are protocols for how to most cost-effectively maintain capital assets, and the ideal timing – or windows of opportunity – to carry out work on transportation assets. The TAMP provides a rigorous outline for prioritizing projects, and effectively informs the work of State and regional DOT offices. Figure 2 illustrates how timing and road condition determine both the type and cost of work required to maintain a road segment).8 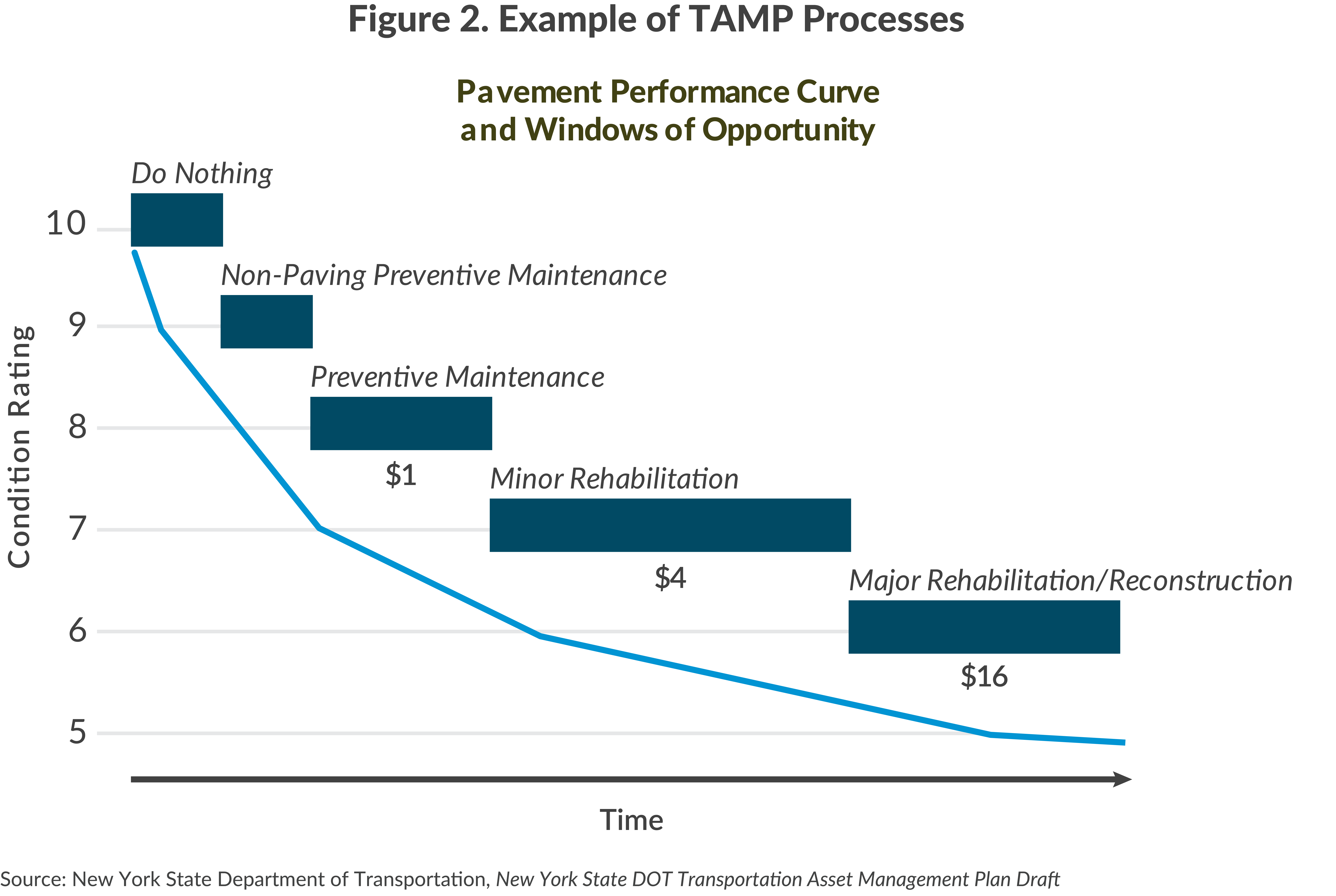 The vast majority of DOT capital spending is dedicated to projects on roads and bridges. Accordingly, DOT maintains detailed inventories of the condition of State-owned roads and all bridges. Annual pavement reports offer meticulous data on the condition and use of over 17,000 centerline miles on State routes and the Thruway (leaving the monitoring of local road conditions largely to local government bodies).9

The State’s pavement data reports present detail on the pavement condition, ride quality, the presence of ruts and cracking in pavement, and the year that work was last completed on individual segments of roadways. In accordance with the requirements of the Governmental Accounting Standards Board (GASB), the State’s Comprehensive Annual Financial Report reports the condition of transportation assets. On a 1 to 10 rating scale of pavement condition, DOT has set a goal of maintaining roads at an average between 6.7 and 7.2; State roads averaged 6.92 in fiscal year 2016.

The condition and use of the State’s more than 17,000 bridges is similarly compiled. Both the DOT and the Federal Highway Administration assess bridge condition and assign numerical and qualitative ratings to the bridges. New York’s bridges are generally in decent condition, with 11.2 percent of bridges graded as structurally deficient.12 Bridge condition is also reported in accordance with GASB rules. On a 1 to 7 rating scale for bridges, the DOT has set a goal of maintaining bridges at an average rating of 5.3 to 5.6. Ratings for the bridges, in fiscal year 2016, averaged 5.3.13

The reports, on pavement and bridge condition, are thorough, detailed, and updated annually; however, one limitation is that the condition data are not linked to the projected costs of maintenance or rehabilitation.

How is the condition of a bridge classified?

All bridges are classified in accordance with federal standards, and receive one of the following ratings:

In order to assess how much work can be undertaken to address capital needs, the State has to determine the resources that are available.

State transportation and transit capital projects are financed through a variety of sources: federal funds, State pay-as-you-go funds, and State bonds14 The federal amount has recently averaged $2 billion.15 The DOT gets a large share of its pay-as-you-go resources from the Dedicated Highway and Bridge Trust Fund, which pools receipts from various taxes and fees, such as those on motor fuels, motor vehicles, and petroleum businesses.16 The remaining funding is derived through the issuance of bonds, and the amount of borrowing dedicated to transportation is determined within the context of statewide debt limits.17 With limited new debt capacity available, slower than forecasted economic growth would lead to a lower debt cap, preventing the State from making all of its planned investments, or increasing taxes or fees absent an increase in federal funding.18

Capital projects can be prioritized after goals and available resources have been established. The State’s existing capital plan for fiscal years 2016 through 2020 was outlined in an MOU that was negotiated and signed by representatives of the Governor, the Assembly, and the Senate. The MOU for 2016 through 2020—although developed more than a year late—provides regional information, project codes, and projected costs and execution dates for most programs.19

The existing MOU strays from the DOT’s asset management practices by allocating funds based on agreements between elected leaders rather than the asset management strategies outlined in the TAMP.20

The budget is accompanied by a Capital Program and Financing Plan (CPFP), which lays out sources and uses of funding for capital programs in the DOT budget.23

The DOT also updates a project database for on-going and planned projects, which tracks the cost, status, and location of projects. Using the DOT Projects Interactive, New Yorkers can search geographically, or by project identification number, for 1,820 completed, ongoing, and future DOT projects. For each project, the DOT database lists status, schedules, and cost information.24 This project catalog is worthy of positive marks, and can be further improved by presenting an aggregate picture of the DOT’s performance in a “dashboard” format, which would increase the flexibility of the existing DOT data by allowing the public to sort and view information on multiple projects simultaneously.  The DOT should also report on its overall performance in implementing projects in the capital program on time and on budget.

Over the course of the five-year capital plan, unanticipated events will occur. Things such as adverse weather events, technological improvements, economic shifts, or changes in federal policy will require new investments and make existing plans to some extent obsolete. However, the State does not currently have official procedures to allow for incremental changes in the five-year plan. A statutorily defined amendment process would grant flexibility to address major system and financial shocks, while preventing a return to ad hoc political forces determining the allocation of the State’s capital funding.

The DOT capital planning process aligns with best practices in certain ways– namely the cataloguing of road and bridge conditions, the assessment of debt capacities, the crafting of a transportation asset management plan, the posting of project statuses online, and the timely passing of State budgets. However, the capital planning process for DOT resources lacks many important capital planning steps such as defining visions and goals, linking asset condition to costs, and authoring an objective capital program.

The most recent five-year DOT capital program was not based on a thorough of analysis of State transportation needs, but instead linked DOT funding to that of the MTA. It was also fifteen months tardy, and left much of the projected capital spending unidentified or unallocated. The State did not specify visions and goals for 2016-2020, and other areas of the process were inadequate and/or disjointed. The 2016-2020 Plan highlights the need for the establishment of a more data-driven capital planning process.

The next five-year capital plan for DOT will cover the period of fiscal years 2021 through 2025 (April 1, 2020 through March 31, 2025). State officials should codify in statute a process to formally set forth appropriate capital planning procedures for DOT assets. A suggested framework for this process is:

If the recommended changes are implemented, legislative and executive leaders will have a capital planning process that is commensurate with the importance of DOT capital assets.