This policy brief updates the Citizens Budget Commission’s (CBC’s) analysis of the cost of New York’s state and local economic development programs.1 The February 2015 report Bigger Not Better: New York’s Expanding Economic Development Programs examined economic development programs from 2010 to 2014 and urged greater reporting, scrutiny, and control of this growing and extensive portion of the budget.  What’s happened since then?

The Cost of State and Local Economic Development Programs

Between 2014 and 2016, the cost of state and local economic development programs grew from $8.2 billion to $8.6 billion, or 2.5 percent annually.2 (See Table 1.3) Spending growth slowed from the prior four-year average of 3.5 percent, but remains substantial.4

The State allocated $4 billion to economic development in 2016. The State’s overall spending remained virtually flat between 2014 and 2016, but State tax expenditures decreased from $2.7 billion to $2.4 billion, while State direct spending increased from $1.3 billion to $1.6 billion. This shift away from as-of-right tax expenditures and toward direct grants to businesses is not well justified. In addition, changes have expanded programs during the past two years without sufficient evidence of an adequate return on investment of taxpayer dollars. 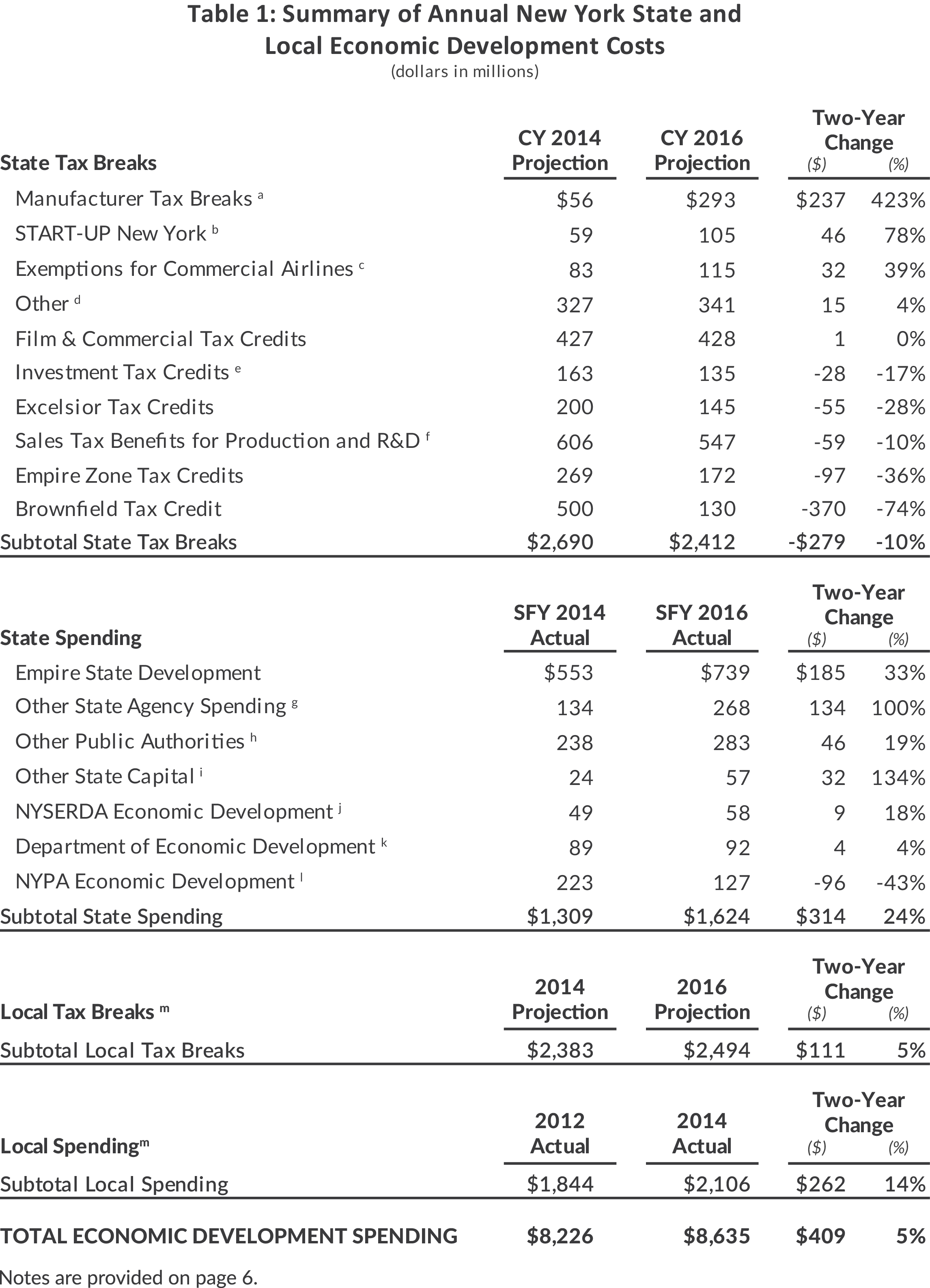 Since 2014 two economic development programs have been reformed: the brownfield tax credit and the investment tax credit. Among the other programs, the costs of three—tax breaks for manufacturers, Empire State Development (ESD) grants, and other state spending—have grown considerably. For full program descriptions, see Bigger Not Better.

Programs with Considerable Growth in This Period

A TALE OF TWO SUBSIDIES

The Muller Quaker factory in Batavia recently closed after having received $560,000 in tax incentives through the Excelsior Jobs Program.  The company received benefits only after investing approximately $200 million and employing an average of 143 employees for two and a half years. The state had provided tax benefits to Muller Quaker based on its actual investments and wages, with a cost to the State per job per year of approximately $2,000. Muller Quaker was in line to receive Excelsior benefits for eight more years, but will not because its promises were not fulfilled. While the Muller Quaker Factory is not a success story, the state’s policy of pay-for-performance under the Excelsior Jobs Program limits the state’s exposure, appropriately countering the risks in economic development spending.

In contrast the State is paying $750 million to build a factory in Buffalo for SolarCity in exchange for a promise of 5,000 jobs at the end of 10 years. Based on the employment projections, benefits are likely to exceed $20,000 per job per year or 10 times the cost per job at the Muller Quaker factory. If the economics of SolarCity falter and the factory does not open or closes prematurely, New York State taxpayers are left holding the bag– an empty $750 million factory. If SolarCity was a participant in the Excelsior Jobs program, SolarCity would be required to make investments in its factory and employ staff, with New York State providing tax credits to offset some of these costs. Instead, New York State agreed to make an upfront investment based on promises that SolarCity will meet evolving employment targets.  If SolarCity does not fulfill its job creation targets, there is a $41.6 million annual penalty that ESD can levy; however, imposing a fine puts the onus on the State to prove that requirements were not fulfilled by SolarCity and puts an economic development entity in the unenviable position of imposing significant economic harm on a New York business. This level of risk is very high.

Updates on Other Programs

Assessment of Progress on CBC's Recommendations

CBC has consistently called for:

The cost of economic development in New York continues to grow overall and for most programs. At $8.6 billion in annual spending and tax expenditures, a significant investment of public funds is being made without the data collection and reporting necessary to determine how much, if any, is warranted.

At best, limited progress has been made in implementing recommended reforms. The most significant step forward has been the establishment of the Regional Economic Development Councils (REDCs), which have been a critical tool for coordinating economic development spending and pursuing strategic investments through a consolidated award process. REDCs have awarded $3.9 billion over five annual rounds of funding; however, there were significant weaknesses in performance reporting in the first years of the competition, both on regional metrics and project-level progress measures.23 Other large programs suffer from similar weaknesses. More robust reporting requirements are necessary so that project outcomes can be evaluated and ineffective programs modified or eliminated.

Virtually no progress has been made in creating a unified economic development budget. New business deals and incentives are announced one by one, with no single tally of their cost to taxpayers.  Individual deals like those with SolarCity and Norsk Titanium are not subject to standardized parameters for eligibility or results.  The substantial growth in state spending on ESD and other grants suggests a shift that underscores the need for standardized metrics, a “database of deals,” and the development of a comprehensive economic development budget to capture the full extent of the state’s financial commitments.24

By Riley Edwards and Dave Friedfel