State Workgroup Makes Limited Progress on Part of the Problem

New York State’s $78 billion Medicaid program includes $5.3 billion of “supplemental payments;” that is, payments not directly associated with provision of medical services. These supplemental payments are crucial to the financial viability of many hospitals across the state, especially those largely serving uninsured and Medicaid populations.

The supplemental payments are facing policy challenges at the federal and state levels. First, if implementation of current federal law proceeds, the supplemental payments would be reduced significantly. New York State would face a $2.9 billion annual cut that will be phased in beginning October 1, 2019. Second, the State’s method for distributing a $1 billion portion of the supplemental payments has been heavily criticized in recent years on grounds that the funds are not well targeted to hospitals with the greatest financial need.

These pressures led the State to convene a workgroup to consider changes to the supplemental payment pool. The Indigent Care Workgroup conducted a review of the current framework and formulas for supplemental payments; three of its members representing important constituencies suggested alternative distribution strategies and formulas; and the group identified multiple criteria for assessing any new distribution methods.  This month the workgroup released a report summarizing its work, but did not make specific recommendations for how to address the current challenges.

The report will help inform stakeholders and elected officials, but it remains up to the State’s legislative and executive leaders to identify specific actions that will remedy the inequities in current distribution methods and adjust to looming federal cuts.

Background on the $5.3 billion Supplemental Payments

The three main types of Medicaid supplemental payments are:

Each of these programs has different financing sources and distribution methods. These payments are summarized in Table 1.

DSH is a federal program that provides a set annual allotment to be distributed to hospitals to make up for financial shortfalls due to serving uninsured and Medicaid patients. The federal funding–over $1.8 billion in New York–must be matched with state or local funding, yielding $3.7 billion in total funding to distribute.

The remaining $2.6 billion is distributed to the State’s public hospitals. The nonfederal portion of the funding is from State taxes for payments to State hospitals and from local (county or city) funds for payments to local public hospitals including those of New York City’s Health + Hospitals. The $2.6 billion is distributed based on the financial losses each hospital experiences from uninsured and Medicaid financial shortfalls. Federal law limits the amount available to State hospitals for mental diseases.

During 2015 the State created two programs–the Vital Accessed Provider Assurance Program (VAPAP) and the Value Based Payment Quality Improvement Program (VBP QIP)–to provide additional support to financially distressed hospitals. VBP QIP is the larger program, directing $350 million in state and local funds and $350 million in matching federal funds to 22 hospitals in severe financial distress. The funding amounts for VBP QIP are set prior to the beginning of each year based on estimated need. A significant share of this funding–approximately $330 million annually–is directed to four hospitals in Brooklyn.4 VAPAP resources are available on a more ad hoc basis. VAPAP is funded only with state funds and can be directed on short notice to hospitals with immediate cash flow needs. Annually approximately $59 million in VAPAP funding is distributed to 12 hospitals. 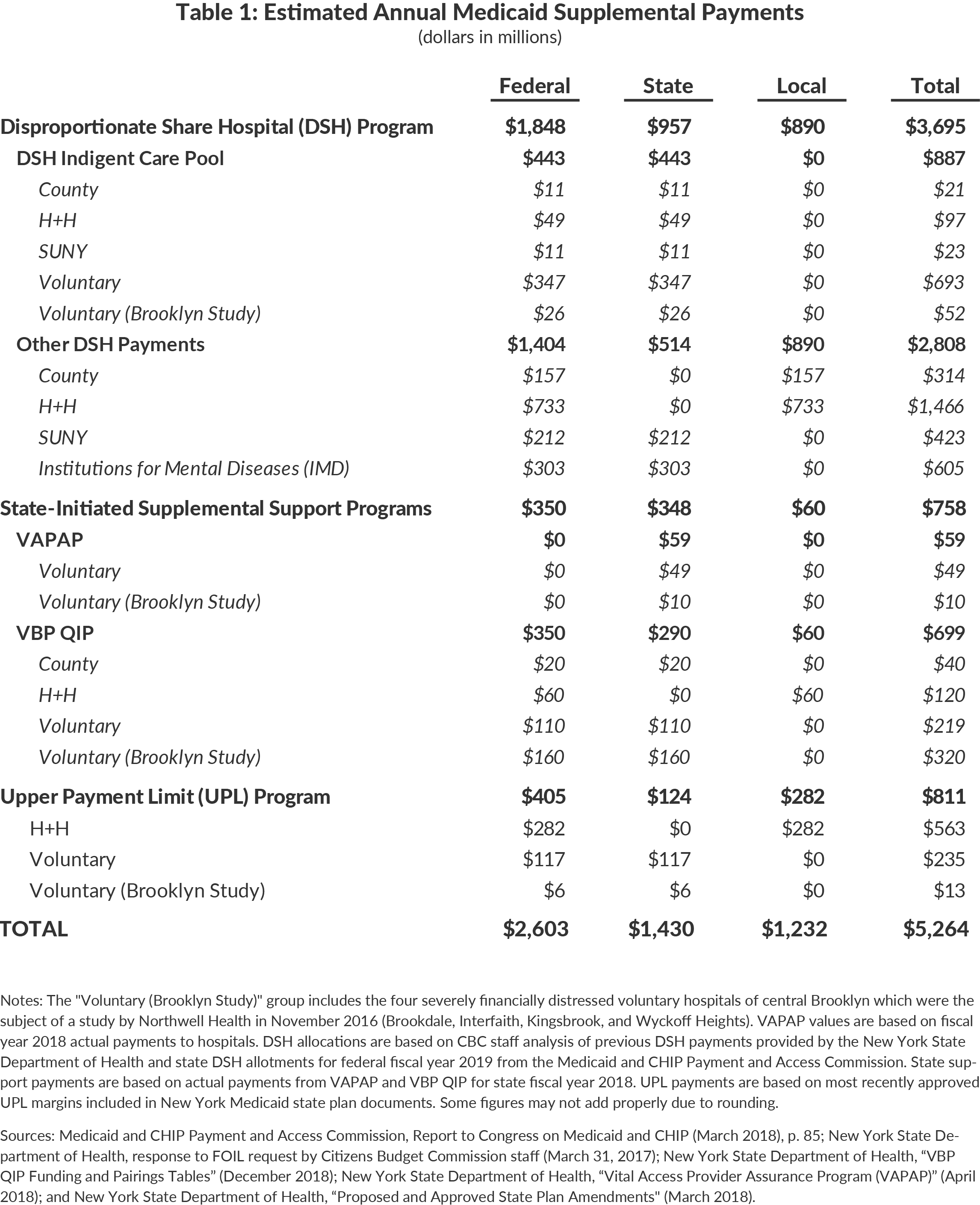 New York receives the largest allocation of DSH funding among the states, but will also receive the largest funding cuts when reductions enacted with the Affordable Care Act (ACA) are implemented. The ACA included cuts to DSH since it was intended to reduce the number of uninsured Americans (and therefore financial losses associated with serving the uninsured). The cuts–which were initially set to go into effect in federal fiscal year 2013–have been delayed on four occasions. With each delay, however, the cuts have been made deeper.5 (See Table 2.) Under the current federal cut schedule adopted in February 2018, New York will sustain a one-year reduction of $1.4 billion beginning on October 1, 2019 and a cut of $2.9 billion in each of the following five years.6

The state’s current method for distributing DSH funds includes no mechanisms for accommodating these cuts. Because of the hierarchy within the State’s current DSH allocation method, New York City Health + Hospitals would sustain almost all the cuts if the federal reductions are implemented.7 The State’s failure to prepare for cuts created cash flow problems at some public hospitals in October 2017, and those issues will emerge again in October 2019 unless a plan is designed to accommodate the cuts.8 It is possible that Congress will delay or reduce the cuts for a fifth time, an action supported by the Medicaid and CHIP Payment and Access Commission (MACPAC). However, MACPAC also recommended changing the method for allocating DSH cuts, which would result in New York’s DSH cut increasing to over $3 billion at full implementation.9

The $1.1 billion Indigent Care Pool is divided among 175 hospitals, with annual payments ranging from as little as $5,000 to as much as $84 million.10 The current distribution method was established in 2013. Each hospital’s allotment is based on its share of inpatient and outpatient volume for Medicaid and uninsured patients, but adjustments are made including floors and ceilings which prevent a hospital from experiencing large year-to-year shifts in funding.11 As previously noted, the current allocation formula has been criticized as complex and resulting in inequities with some relatively financially healthy institutions receiving large payments. These critiques make a strong case for the need for reform.

Following the fourth delay of the federal DSH cuts and the critical analyses of the Indigent Care Pool, the State convened the Indigent Care Workgroup.12 The Workgroup met four times during 2018 to review the current allocation method and reviewed multiple proposals for changing the formula. A report from the group with background information and suggested criteria for assessing future reforms was recently released, but the Workgroup did not endorse any single proposal or component of a proposal.13

The Workgroup’s report is a significant contribution to the policy deliberations; it is now up to New York’s legislative and executive leaders to respond to the current and looming challenges.14 Two aspects of DSH reform deserve attention this year: