Who's Got the Unfairest Tax Burden of Them All?

One of the basic principles of good tax policy is equity: similarly situated taxpayers should have similarly sized tax bills. New York City’s property tax system does not comport with this principle: owners of one-, two-, and three-family homes are subject to highly disparate effective tax rates due to statutory caps on the growth in the assessed values of their homes. This means that homeowners in areas where property values are growing quickly benefit at the expense of those whose property values are relatively stable. The inequitable tax burdens among small homeowners are some of the most prominent and compelling reasons for reform of the City’s property tax system.

New York City has a classified property tax system, which means that properties are assigned to a class based on size and use, with each class subject to different rules for the calculation of values and tax liabilities. The four tax classes are: 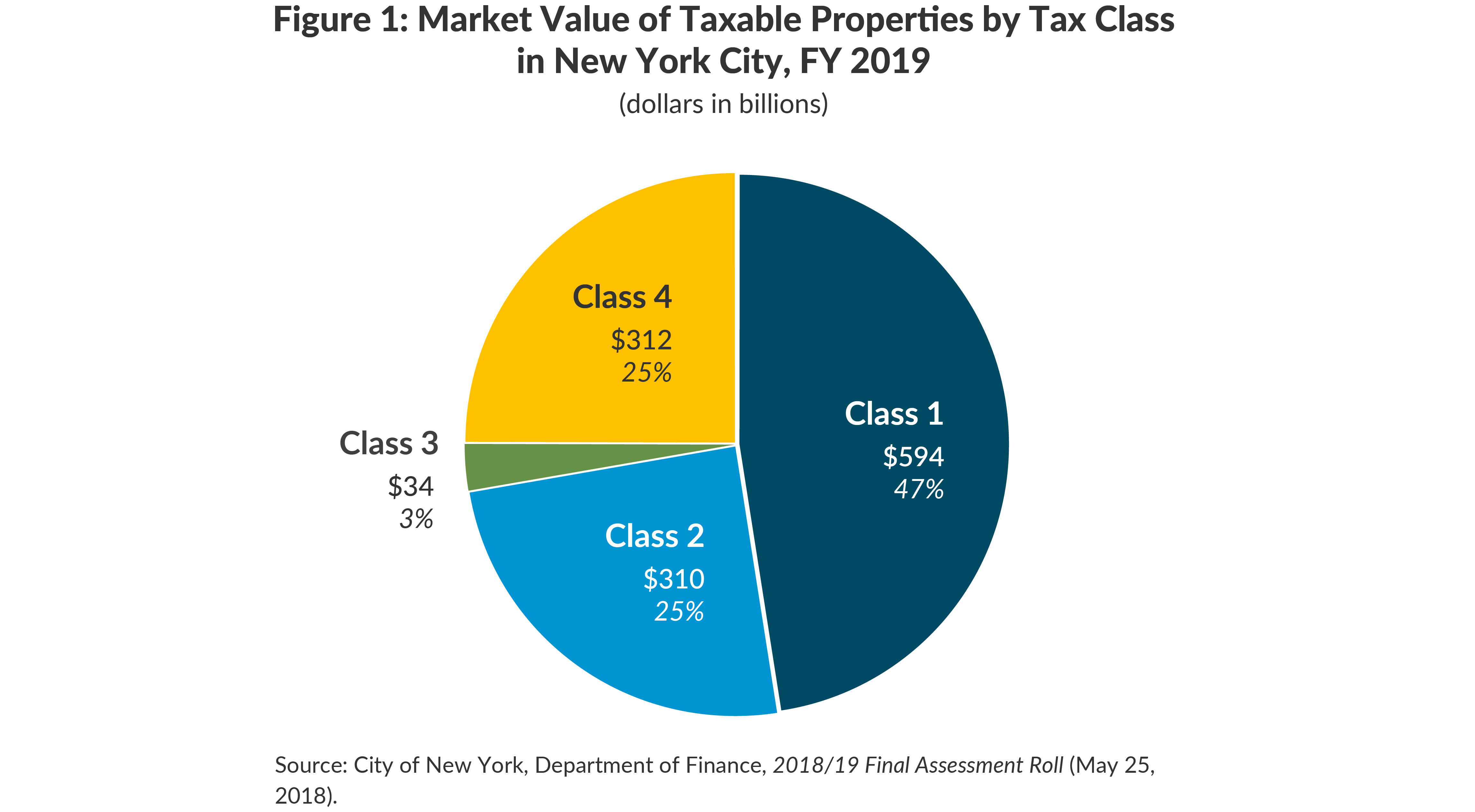 There are approximately 660,000 one-, two-, and three-family homes, with the largest shares located in Queens and Brooklyn (42 percent and 31 percent, respectively), followed by Staten Island (17 percent).  Fewer than 10 percent of Class 1 properties are in the Bronx, and the remaining 1 percent of properties, just more than 6,000, is in Manhattan.

How are property tax bills determined? The first step is to determine a property’s market value. The New York City Department of Finance (DOF) methodology varies based on the property’s tax class and requirements in State law. Class 1 market values are statistically modeled using sales prices of comparable properties based on size, location, number of units, and age.

Once the market value of a property is determined, DOF calculates the property’s assessed value by applying a 6 percent assessment ratio for Class 1 properties; however, this ratio may be reduced by statutorily required limits on the increase in a property’s assessed value. To protect taxpayers from spikes in their bills, State law limits the annual increase in assessed values for Class 1 properties to no more than 6 percent and no more than 20 percent over five years.3 As a result many properties, particularly those experiencing rapid appreciation in market value, end up with assessment ratios below 6 percent.

Each year DOF publishes a property tax roll which reports the City’s valuation of all properties. Citizens Budget Commission (CBC) examined fiscal year 2019 data on Class 1 properties individually and on a neighborhood basis using the Department of City Planning Neighborhood Tabulation Areas (NTAs), which are aggregated census tracts,  to calculate and compare effective tax rates.4  The effective tax rate (ETR) (which measures a property tax bill as a percentage of the property’s market value) is the most commonly used metric for comparing tax burdens.5

Median market values of Class 1 properties are higher than the citywide median in Brooklyn, Manhattan, and Queens, and lower in Staten Island and the Bronx.

Assessment ratios are highest in Staten Island and the Bronx, but just 5 percent of Class 1 properties citywide are assessed at the 6 percent target ratio.

Table 3 also shows more variation in assessment ratios within Brooklyn than within the other boroughs. In Brooklyn, 75 percent of Class 1 homes have assessment ratios greater than 2.3 percent, while the top 25 percent of homes are assessed at more than 4.3 percent, a difference of 2 percentage points, reflecting high rates of appreciation in some Brooklyn neighborhoods while market values in others grow more slowly.

The median market value of Class 1 properties is greater than the citywide median in 56 percent of New York City neighborhoods.

The Appendix provides an interactive list of New York City neighborhoods along with data on median market value, assessment ratio, and ETR.

Neighborhoods where market values surpassed $1.3 million are primarily in northern Brooklyn and Manhattan.

Figure 2 presents the median market value of Class 1 properties by quintile, with each color on the map representing 20 percent of the city’s neighborhoods. The majority of neighborhoods in the top quintile, shown in red, are located in northern Brooklyn and Manhattan; all but one neighborhood in Manhattan (Marble Hill/Inwood (MN01)) ranks in the top quintile for median market value. The second and third top quintiles (orange and dark blue, respectively) mostly cover neighborhoods in southwestern Brooklyn and northern Queens.  The two lowest quintiles, shown in gray and white, are concentrated in the Bronx, Staten Island, and southeastern Queens.

Neighborhoods with median values below $519,000 are mostly in the Bronx.

ETRs are lowest in high-value Manhattan and downtown Brooklyn, and highest in lower-value Staten Island and the Bronx.

Figure 3 shows the median Class 1 ETR by neighborhood. Neighborhoods that report the highest ETRs (red and orange shading) are clustered in the northern Bronx, Staten Island, and parts of eastern Queens—areas of the city with lower property market values and higher assessment ratios. Conversely, the lowest ETRs are in northern Brooklyn and Manhattan (white and gray shading). 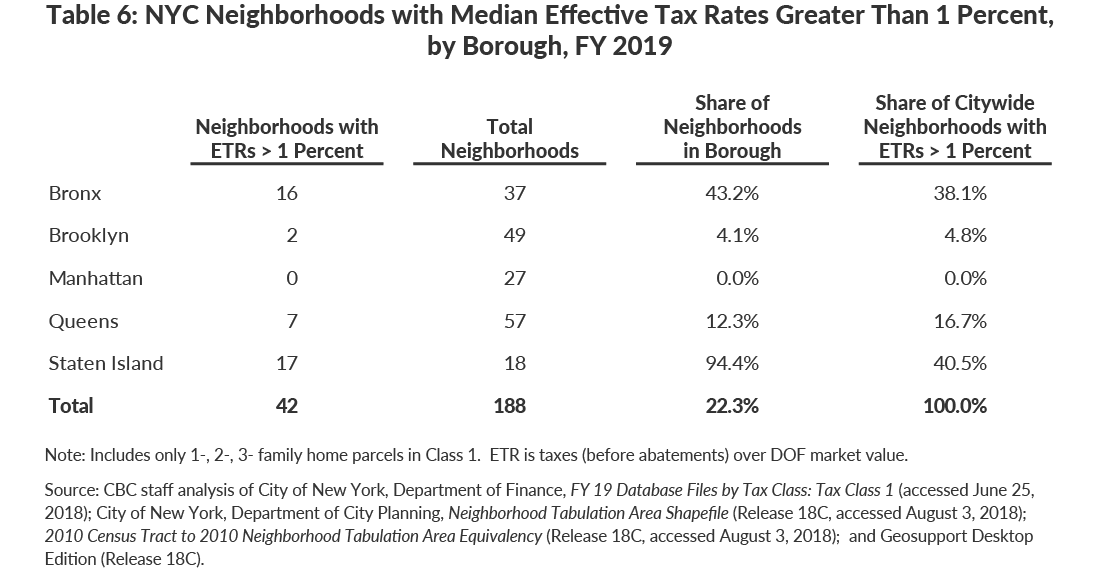 High ETR properties are concentrated in Staten Island and Queens.

The median citywide ETR is 0.89 percent and about 25 percent of properties have ETRs greater than 1 percent. 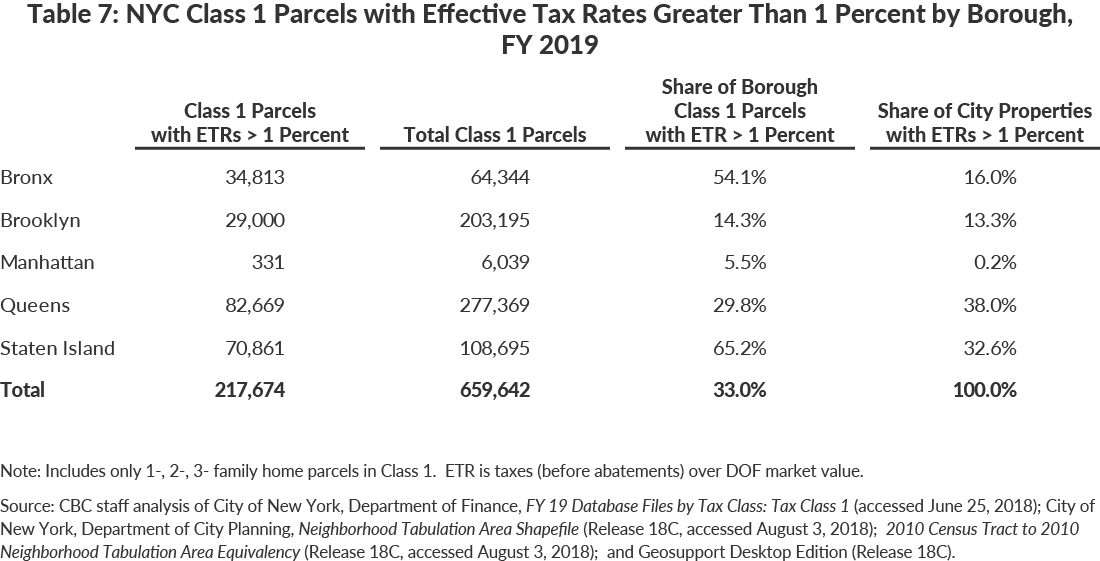 As CBC has previously explained, statutory caps on growth in assessed values create disparities in ETRs and inequities in tax burden.  They insulate homeowners in neighborhoods experiencing dramatic market value growth from rapid increases in their property tax bills, shifting the burden of  higher effective tax rates to neighborhoods in Staten Island and the northern Bronx that are experiencing relatively stable, rather than rapidly appreciating, property market values.

A government-appointed property tax commission has not conducted a comprehensive review of New York City’s property tax code in more than two decades.8 In May 2018 Mayor Bill de Blasio and Council Speaker Corey Johnson appointed the New York City Advisory Commission on Property Tax Reform to undertake a review.9  The Commission has been tasked with recommending reforms to make the property tax simpler, fairer, and more transparent, while maintaining the level of tax revenue. One of the items at the top of the Commission’s agenda should be addressing the inequities in the Class 1 property tax by restructuring or eliminating caps on assessment growth.

By Jenna Davis and Ana Champeny