Reform at the Bargaining Table

The Metropolitan Transportation Authority’s (MTA) fiscal outlook is dire. The latest update to the authority’s four-year financial plan projects annual cash deficits growing from $68 million this year to $976 million in 2022. End-of-year reported cash reserves will be exhausted next year, and in 2022 the authority will have a cumulative cash shortfall of nearly $2.3 billion. (See Table 1.) 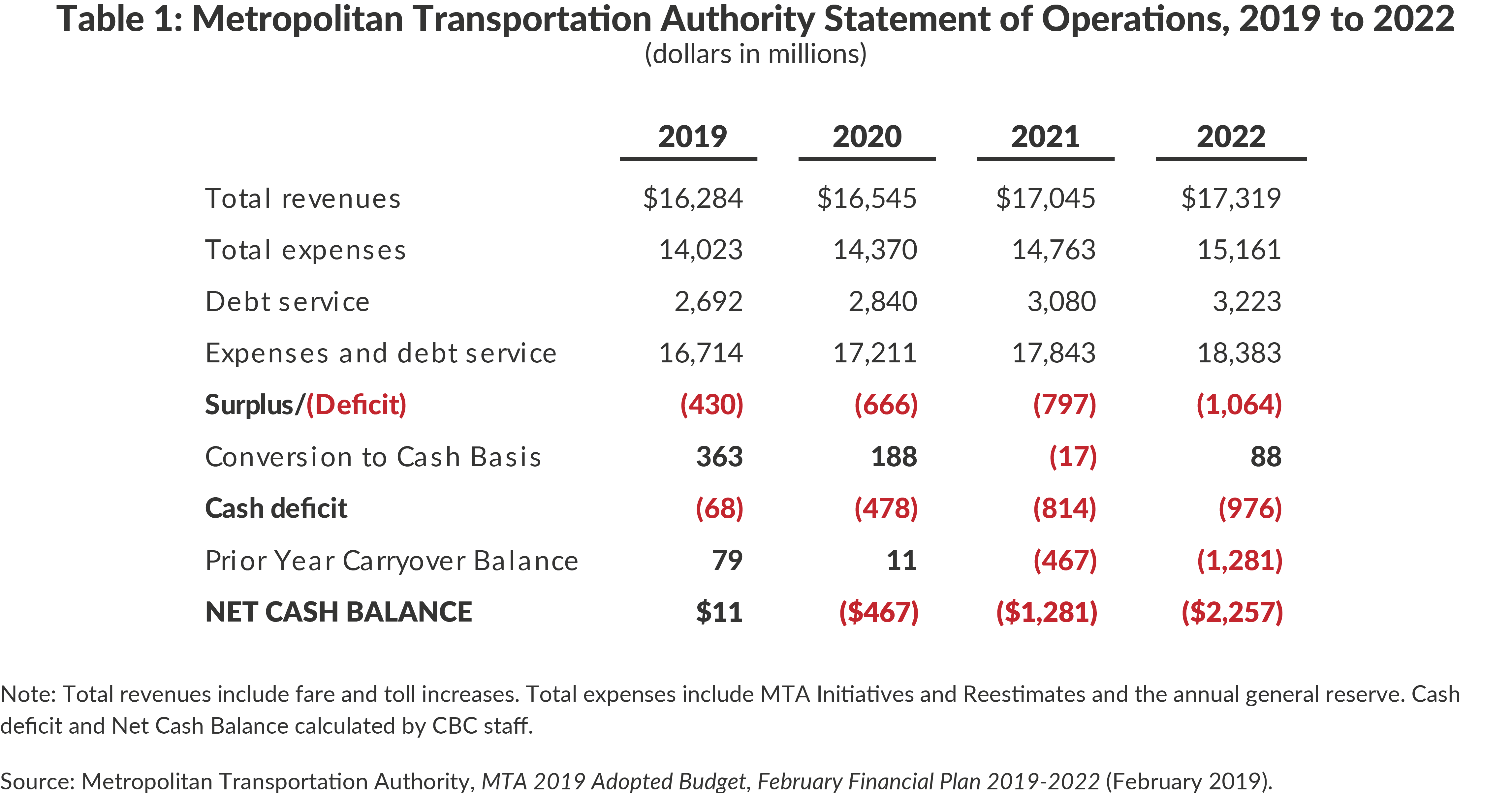 Improving the MTA’s fiscal outlook requires a multipronged approach. With new revenue streams secured in the recent legislative session to support the capital program, the MTA should focus on controlling operating costs. Paramount in this effort is slowing the growth of labor costs, which in 2019 are expected to surpass $10 billion, or nearly three-fifths of the MTA’s operating budget.1

Contracts governing the vast majority of the authority’s unionized workforce are scheduled to expire this year. Notably the contract with the Transport Workers Union (TWU), which represents approximately 38,000 subway and bus workers, expires May 15; contracts with all Long Island Rail Road (LIRR) workers will expire in 2019, and contracts with approximately half of all unionized Metro-North Railroad (Metro-North) workers also will expire in 2019.2

The MTA financial plan assumes all represented workers will receive 2 percent wage increases annually upon the expiration of the current contracts.3 In light of the troublesome fiscal outlook, this assumption should be revised; any pay increases should be conditioned on generating offsetting savings. Such agreements would save an estimated $72 million in 2019 growing to almost $400 million by 2022.(See Table 2.)

As with other MTA stakeholders, workers have a vital interest in resolving this budget crisis. In difficult financial times it is not unusual for collective bargaining agreements to forgo raises. In the wake of the 2008 recession labor contracts with MTA, State, and City workers included years without wage increases as the public sector coped with substantial revenue shortfalls.4

Average pay for MTA workers is already relatively high for the region. Median earnings for MTA workers in 2017 was $84,955.5 (See Figure 1.) This individual earnings amount is 18 percent greater than the median annual household income for the New York metropolitan area, $72,205.6 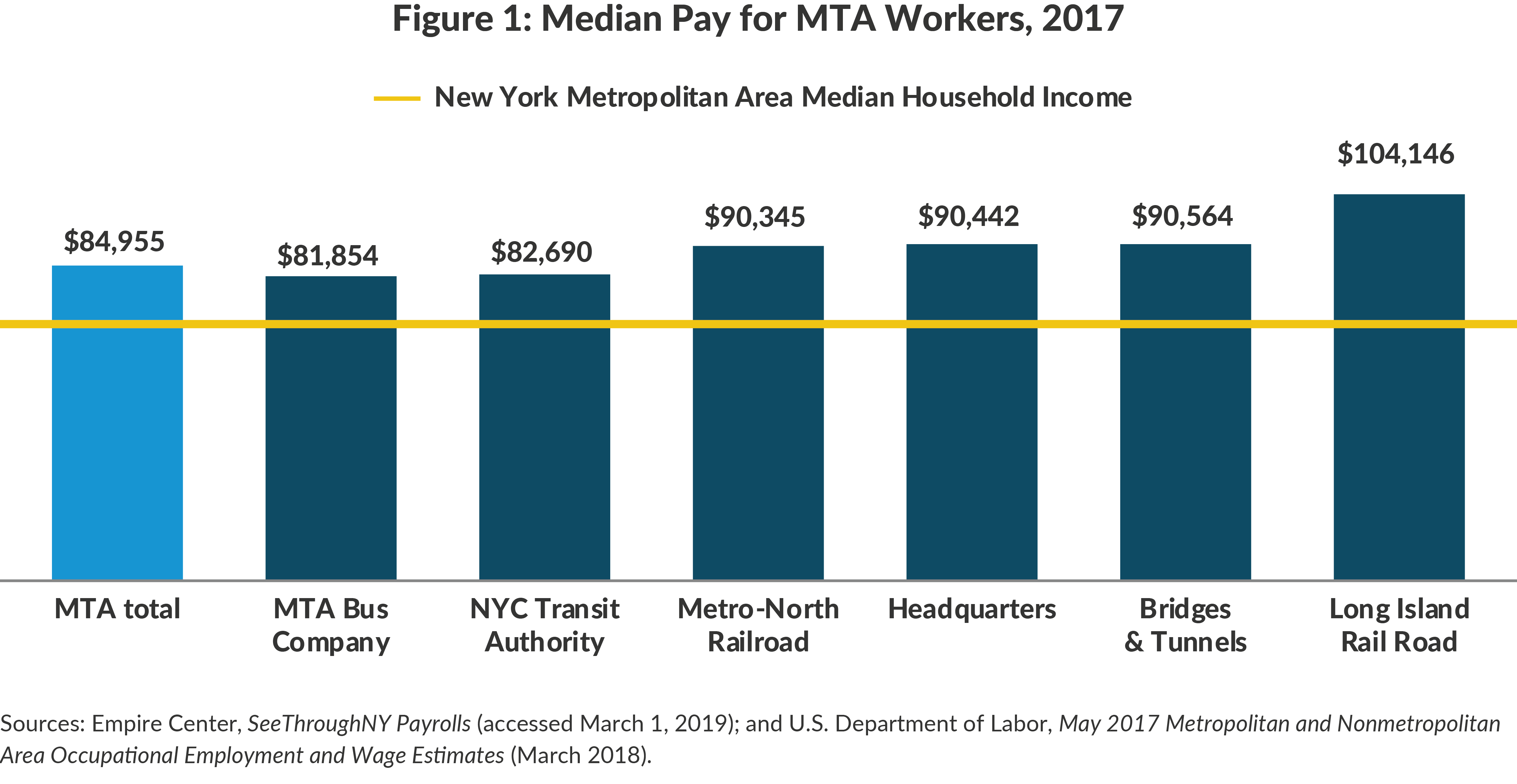 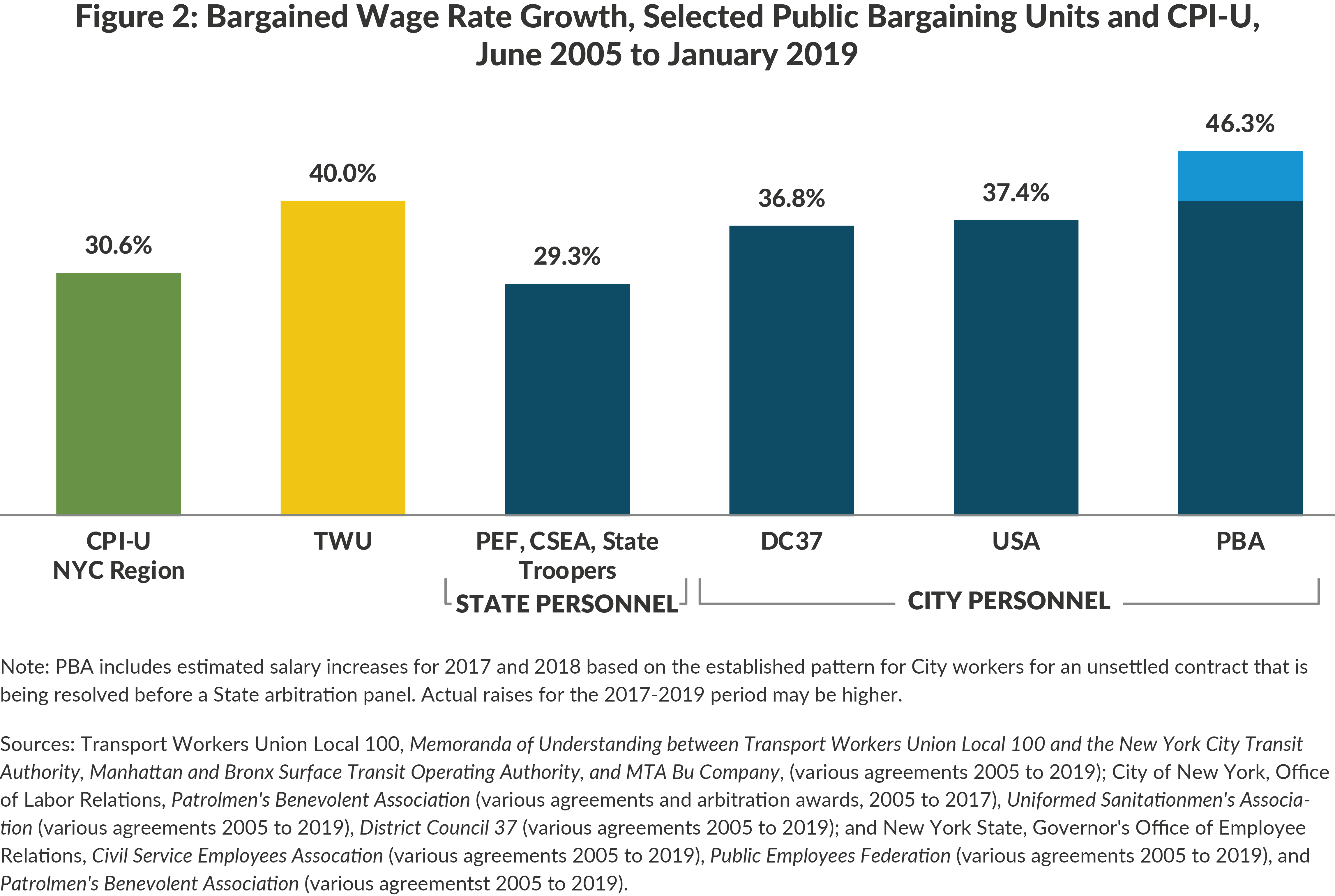 Forgoing raises can save nearly $950 million over the life of the financial plan, but new contracts could allow for wage increases without imposing additional financial burden by offsetting the cost of increases with two types of savings: increased employee contributions to fringe benefit costs and productivity increases.

In 2018 the MTA spent nearly $3.4 billion on fringe benefits for workers and retirees: $1,318 million for health insurance premium payments on behalf of employees and contributions to welfare benefit funds; $1,446 million for employer contributions on behalf of MTA workers enrolled in one of six defined benefit pension plans; and $614 million on other postemployment benefits (OPEB), primarily premiums on retiree health insurance.9 Benefits provided to the MTA’s represented workforce are comparable to—or in some cases more generous than—those received by other public sector workers, but their contribution towards the costs is less than that of other State workers and nonrepresented employees at the MTA.10

Represented workers contribute 2 percent of base wages on a 40-hour workweek toward health insurance premiums, and the MTA, as the employer, covers remaining premium costs. Employees are enrolled in a variety of health insurance plans. In 2017 premiums for employees in the New York State Health Insurance Plan (NYSHIP) were $21,770 for dependent coverage and $8,670 for individual coverage.11 Contributions vary by employee; according to 2017 data Citizens Budget Commission (CBC) estimates New York City Transit (NYCT) employees paid between an estimated 3 percent and 15 percent of premiums and commuter railroad employees contributed an estimated 5 percent and 12 percent of premiums.12 (See Table 3.)

Nonrepresented MTA workers, like other New York State employees, contribute a fixed share of the total health care premium. In 2017 employees with family coverage paid approximately 19 percent of the premium ($4,100), and those with individual coverage paid 10 percent of premium ($867). Based on greater participation in family coverage, the composite rate is 18 percent.13 As health insurance premiums increase, so too do these employees’ contributions.

Increasing employee health care contributions of represented workers to levels similar to the nonrepresented workforce would defray a significant share of the authority’s $1.4 billion health and welfare expense. In 2017 an estimated $4 billion in payroll was subject to the 2 percent gross wage contributions to health care, reducing MTA health and welfare expense by $80 million.14 This represented 8.1 percent of the estimated $986 million in health insurance premiums for these workers.15 Increasing this contribution rate to 18 percent of premium would have reduced the authority’s contribution an estimated $97 million.

Unlike MTA workers, employees of the City of New York do not pay health insurance premiums. However, in recent years the City and its labor partners have committed to savings targets through driving down rates from insurers and vendors, eligibility audits, lower per patient care through improved care delivery, and increased worker wellness.16 As of City fiscal year 2018 the agreement had yielded nearly $1.3 billion in annual savings against the financial plan or 12 percent of projected health costs at the time of the agreement. A subsequent health savings agreement coving fiscal years 2019 to 2021 builds on the first round of savings by generating another $600 million annually by fiscal year 2021.17 Reductions in MTA health costs of similar proportion to the savings from the City’s initial agreement would save the MTA $203 million annually by 2022.18

MTA retirees are eligible for medical benefits including premium payments for a Medicare supplemental plan. These benefits can be altered through collective bargaining agreements. Other State retirees contribute between 12 percent and 16 percent of individual coverage premiums and 27 percent and 31 percent of dependent coverage premiums based on the retiree’s final civil service grade. Applying these shares to the number of MTA retirees receiving retiree benefits would save the MTA an estimated $136 million to $165 million in 2019.19

Changes to member contribution rates and benefits cannot be made through collective bargaining. Rather, modifications—which only affect future employees—must be passed as State legislation and signed into law. Although not providing immediate budget relief, increases to new member contribution rates or changes to benefit calculations can reduce MTA long-term costs. Such changes could be discussed as part of the collective bargaining process where both sides agree to support legislation to enact such changes. In 2005 the MTA sought increased employee pension contributions but the ultimate settlement yielded less substantial savings through the cost sharing on health insurance premiums.21

Productivity measures the units of output per hour of work. In the case of mass transit output is measured in the number of hours or miles of service provided by the authority. Productivity is measured for all employees and separately for vehicle operators and maintenance employees.22 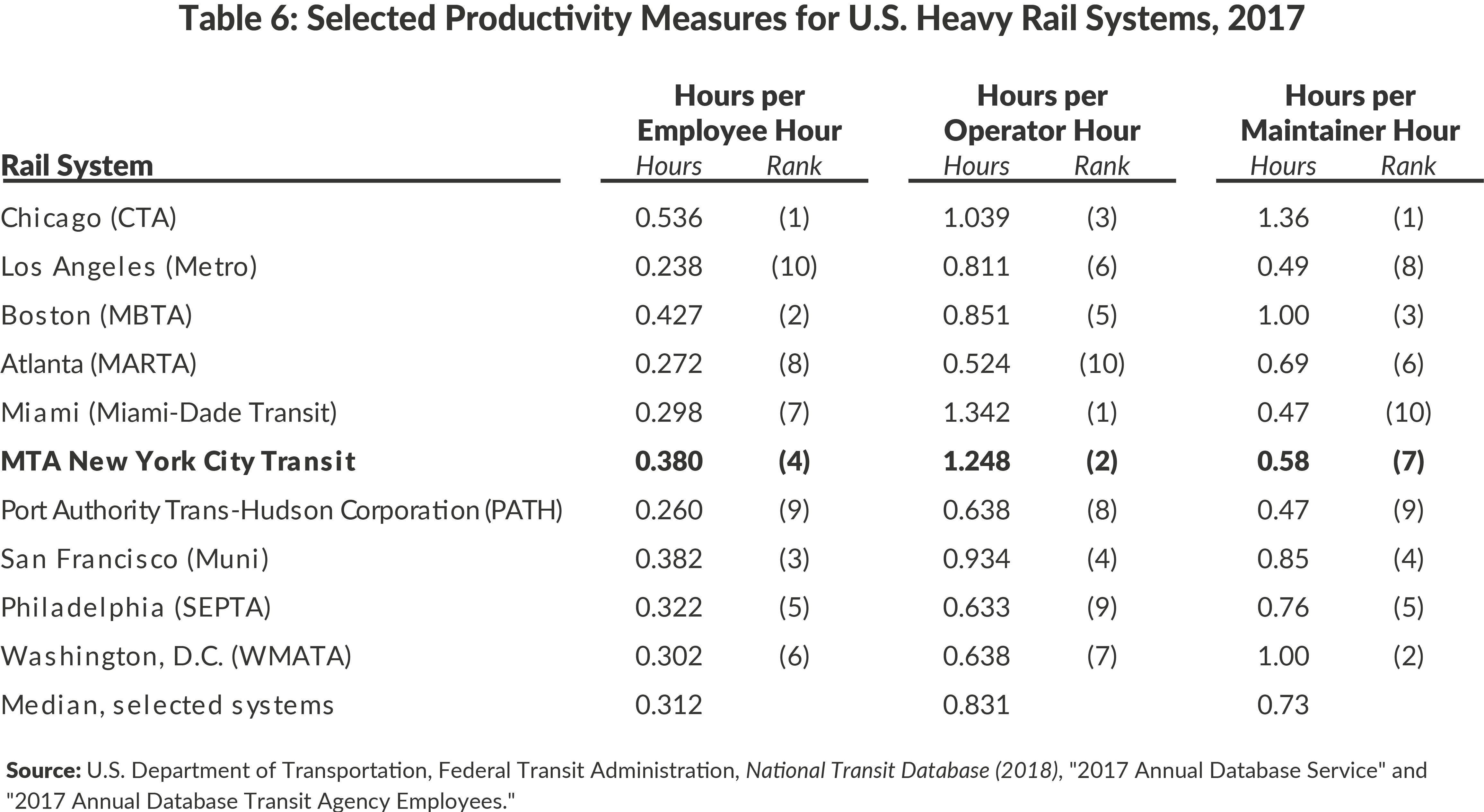 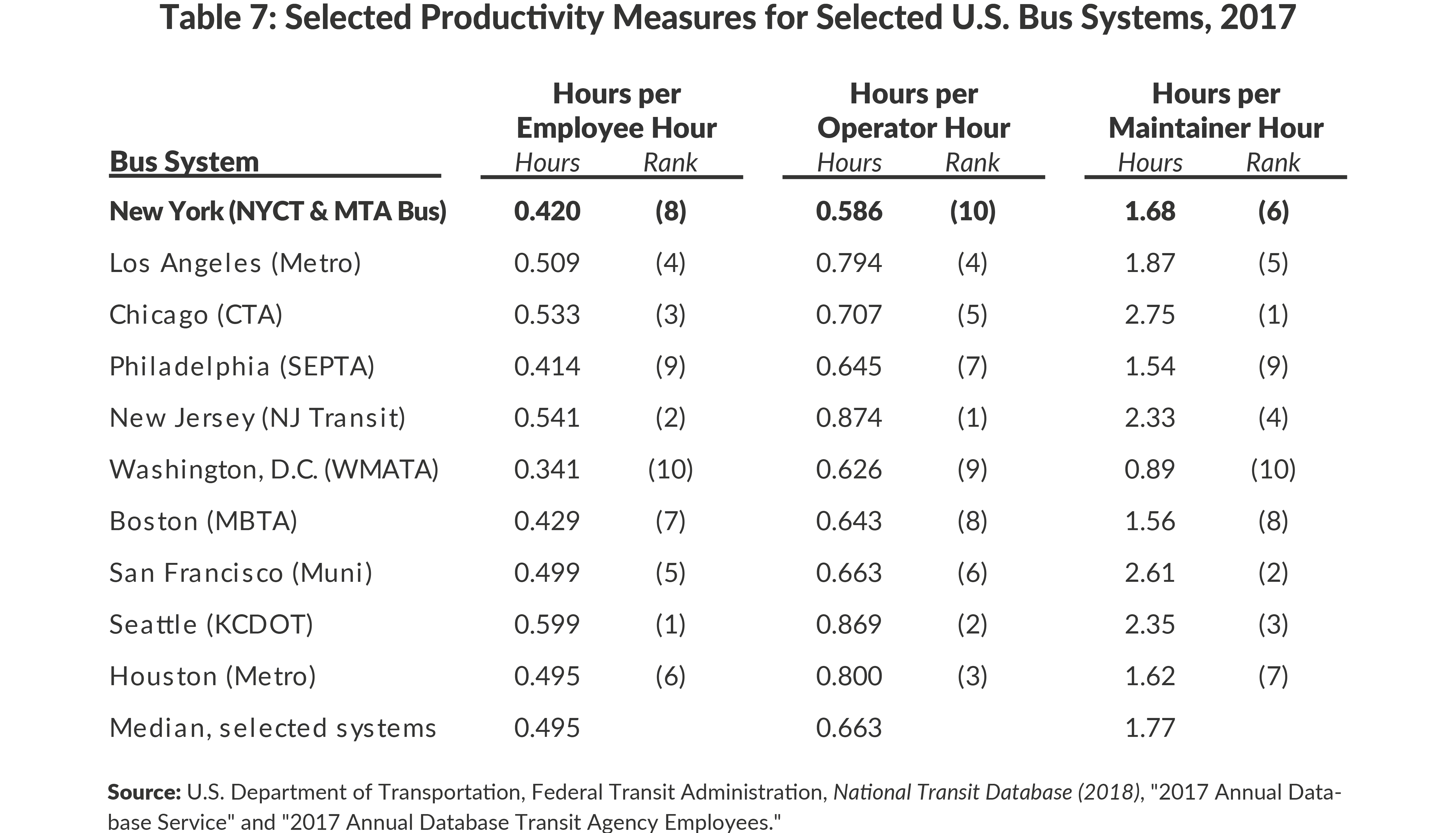 MTA management and labor should set productivity goals and collaboratively develop an agenda of collective bargaining changes that would allow both sides to achieve these goals. This could include incentives for maintenance shops to complete more work with fewer maintainer hours. Maintenance shops could earn bonuses based on their performance completing certain tasks relative to other shops in the system.

Collective bargaining changes could also include changes to work rules to make scheduling more flexible. For example, new collective bargaining agreements could reduce “penalty payments” made to bus operators scheduled to work across both morning and evening peak periods and eliminate allowances for time not worked. New agreements also could eliminate the restrictions on hiring more part-time bus operators and the restrictions on express bus scheduling that would allow to authority to orient service toward peak periods. Likewise allowing management to schedule split runs for subway train operators and conductors would allow for more efficient scheduling of those workers.

In the last year MTA stakeholders have contributed to improving the fiscal stability of the MTA. Riders are paying increased fares; motorists are paying increased tolls and will be charged to drive in the central business district starting in 2021; State and City taxpayers will contribute greater resources; and MTA administration will undergo a review and restructuring to increase efficiency and public accountability. The TWU should also be part of the solution; its labor agreement sets the tone and pattern for the remainder of the authority’s collective bargaining agreements and drives the growth of the MTA’s workforce costs.

The last two rounds of collective bargaining at the MTA have led to cumulative wage increases totaling 14 percent while attaining little in additional employee benefit contributions and little in work rule reforms. The authority’s current fiscal plight and physical degradation make a stronger case for self-funded raises than at any point since the recession in 2008. An approach to collective bargaining that freezes total labor costs over the life of the financial plan is best suited to place the MTA on solid financial ground. Wage increases are not precluded, but any agreement should include savings from productivity improvements or contributions to benefit costs to offset the costs of wage increases. As a major authority stakeholder, the MTA’s workers should cooperate in helping it achieve a viable fiscal future.