Target School Aid to Avoid the Most Painful Cuts

New York State is facing profound impacts on public health, health care, economic activity, and public finances from COVID-19. The New York State Division of the Budget (DOB) reports that the State will reduce fiscal year 2021 local assistance spending by $8 billion from $69.7 billion to $61.7 billion in order to balance its budget. If that reduction is implemented, school aid, which represents $26.8 billion or 38 percent of state local assistance spending, will not be exempt from State spending cuts.

As the State evaluates measures to close the budget gap, it should first ensure that districts that lack sufficient local resources to meet SBE standards receive the necessary funding. Decreases in funding should first target districts that do not need State aid to fund an SBE. Although cuts in State aid to these districts may require program adjustments, these districts will still have sufficient revenues to provide a constitutionally guaranteed SBE. (See table 1.) 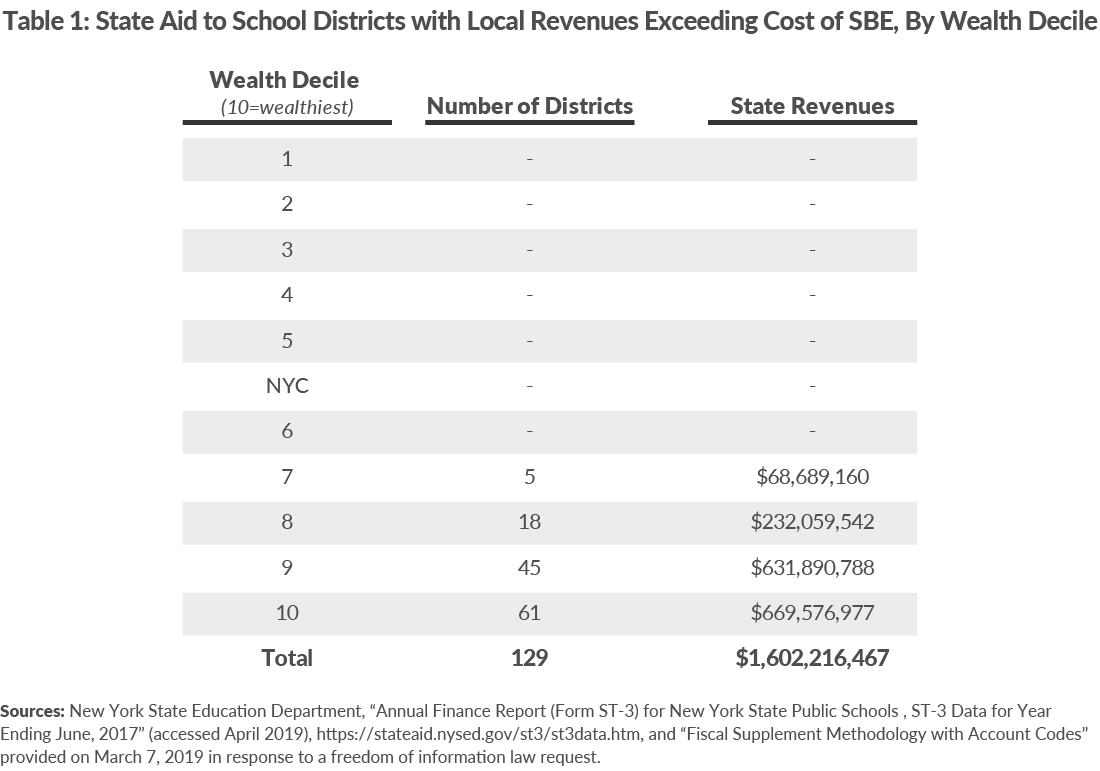 In addition, the Executive Budget proposed to fold $1.8 billion in ten different types of education aid into Foundation Aid, which was a step in the right direction of consolidation of most types of school aid into one revenue stream.2 However, the Executive Budget fell short by preserving the ten aids’ allocation methods rather than making them need-based. For example, library, textbook, and software aids total $237 million and provide the same amount per pupil regardless of student need or district wealth. High tax aid totals $223 million and actually provides more aid to wealthier districts.3 By incorporating funding from these aids into a revised Foundation Aid formula, the State can reduce costs and ensure all districts have the necessary revenues to provide an SBE.

With the State budget being realigned, now is the time to revisit how New York distributes its school aid dollars by accounting for student need, district wealth, and total district revenues. Across-the-board cuts may be more politically palatable but will have a disproportionate impact on the less wealthy school districts that receive a greater portion of their revenues from the State.

Target School Aid to Avoid the Most Painful Cuts