The Citywide Savings Program: OMB is Leading and Agencies Should Follow

A smaller amount comes from increasing the efficiency of agency operations ($24 million and $126 million in fiscal years 2017 and 2018, respectively); in fact, there are several agencies that do not participate in the CSP at all.2 The Office of Management and Budget (OMB) created a Savings Unit that has taken the lead in identifying initiatives to improve operations and to provide recurring and growing savings; City agencies should similarly review their operations to enhance productivity and reduce expenses.

OMB’s Savings Unit has identified 11 worthwhile initiatives that will save $31 million in fiscal year 2018 and grow to $124 million by fiscal year 2021.3 The initiatives target areas where there have been long-standing inefficiencies, including overuse of overtime, paper-based systems, and unnecessary resource segmentation across agencies.

CBC has frequently sounded the alarm on runaway overtime costs.4 As part of the budget process, “caps” have been or will be placed on overtime earned by uniformed personnel.5 As part of the CSP, OMB will work with agencies to exercise stricter review of waivers for civilian overtime, and overtime for “skilled trades,” including positions such as master electrician, master plumber, and welder, will be capped at 12 percent of straight-time hours and at 50 percent of an employee’s base salary.6 To tackle the issue in the long run, a Centralized Skilled Trades Pool will be established within the Department of Citywide Administrative Services to more nimbly deploy personnel to address temporary maintenance backlogs, alleviating the need for overtime for these agencies’ in-house workers. These initiatives will save $14 million to start, with savings growing to $28 million annually once the pool is established fully.

The Procurement Reform initiative will move paperwork to an online system in order to accelerate contract processing for savings that double from $20 million to $40 million by fiscal year 2021. This is expected to reduce existing vendors’ overhead costs and consequently their pricing, and also to increase competition from new vendors who are able to enter the market when the administrative burden is reduced. In addition, the two space management initiatives will save $23 million by fiscal year 2021 by utilizing a shared data system for all city-owned and leased space to improve future decision-making about space requests. Lastly, the Paper Check Reform will reduce expenses by $1 million in fiscal year 2018 by ending interagency payments using paper checks and encouraging city personnel to use direct deposit.

The City has a fleet of more than 29,000 vehicles.7 Increasing car-sharing within and between agencies will reduce the size of the fleet and use of rental vehicles. Additionally, large vehicles will be replaced with sedans when possible, and salvaged vehicles will be auctioned. This initiative will prune $10 million in fiscal year 2018.

The Department of Education (DOE) offered the greatest efficiency savings: $59 million in fiscal year 2018 growing to $72 million in fiscal year 2021. Significant sources of DOE efficiency savings include placing teachers from the Absent Teacher Reserve into permanent positions, insourcing positions currently filled by consultants, and consolidating schools, for savings of $11 million, $7 million, and $4 million, respectively, in fiscal year 2018. But the agency has a $24 billion operating budget, and these savings constitute just 0.2 percent of its total budget and 0.5 percent of city-funded expenditures. 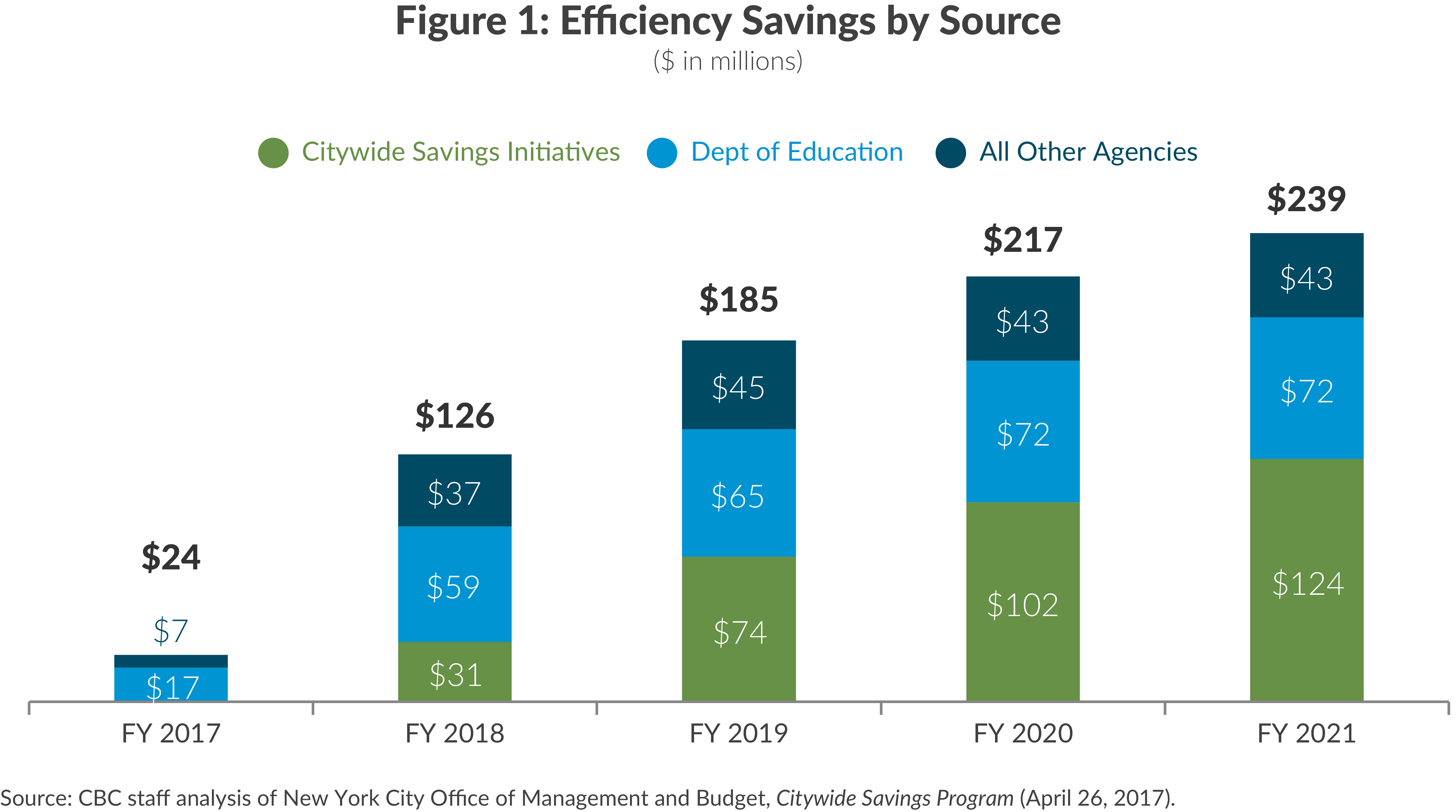 The DOE case illustrates small increases in efficiency at large agencies can have a large effect on total savings. And, if all agencies pursued and achieved efficiencies worth just 1 percent of their city-funded expenditures, they would generate $378 million in savings in fiscal year 2018—tripling the size of the current efficiency program.9

OMB’s Savings Unit has set a strong example of seeking efficiency savings across the board and individual agencies should follow suit. Agency participation in Mayor de Blasio’s Citywide Savings Programs has so far been voluntary, but many agencies, especially those with substantial city funds budgets, are developing few or no efficiency savings. Such limited participation may call for reinstating savings requirements for agencies.